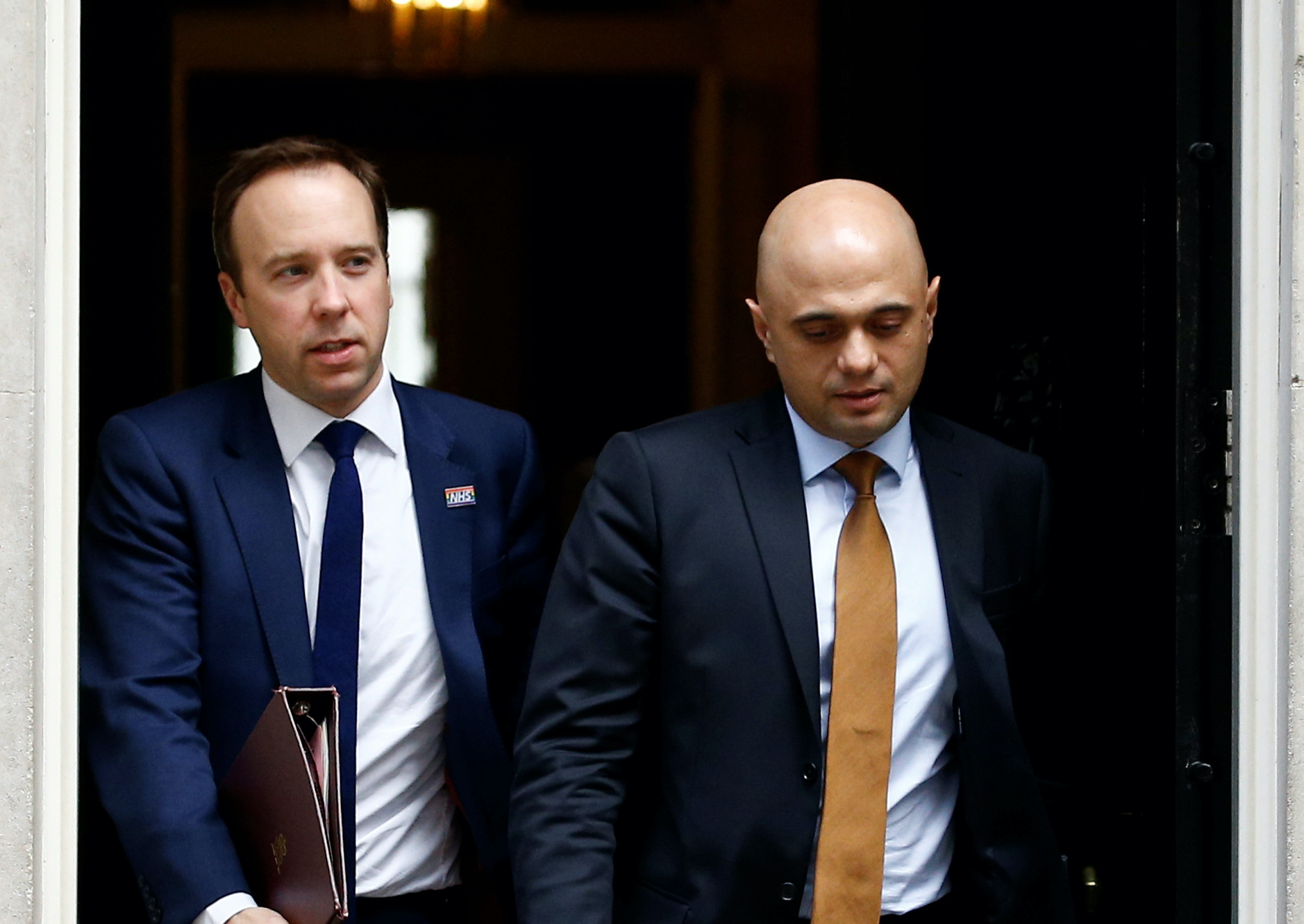 Throughout the first year of the pandemic, responsibility for the U.K.’s health service lay with Matt Hancock, who first rose to public prominence when, as a more junior MP, he launched a social media app called simply “Matt Hancock.” This app allowed people to connect via the Matt Hancock platform and receive Matt Hancock updates.

Later, he became notorious for handing out multi-million pound COVID supply contracts to his friends – although he managed to ride that scandal out, with even the leader of the opposition offering him a measure of support. Anyway, Hancock was caught making out with an employee, and he looked a bit like a Sim when he did it, so he’s gone now – replaced by the unthawed former Chancellor of the Exchequer, Sajid Javid.

In the same way that Hancock became known for launching a social media app called Matt Hancock, Javid is often cited as a committed follower of Ayn Rand – apparently, his wife once threatened to divorce him unless he stopped reading The Fountainhead to her out loud. Rand, of course – the intellectual darling of American libertarianism – was the founder of a philosophy called objectivism, which evangelizes for laissez-faire capitalism as somehow morally enervating, the only system of government compatible with Rand’s hard, heroic view of life. Javid is careful in interviews to note that objectivism only inspired him, and he does not subscribe to Rand’s total rejection of altruism – something that might be a bad look for someone in public life.

But objectivists don’t only think that society should be run in such a way as to allow the already strong to act as selfishly as they like. Objectivism purports to be a complete philosophical system, so it also has to do stuff like tell us what reality is. And for Randians, reality is pretty straightforward: there exists something that we can call objective reality, and that thing is mind-independent (it’s not invented by us), but our senses nevertheless allow us to accurately know it.

Now, in philosophical circles, insisting on such an epistemology would be… I mean, I suppose it’s almost the equivalent of calling yourself a physicist while claiming that the sun revolves around the earth. In the early modern period, philosophy was defined, more than anything else, by the comprehensive debunking of this sort of “common sense understanding” of how the mind relates to the world. It involves a version of what philosophers now call the myth of the given: the fallacy that perception, by itself, can be used to justify a knowledge claim.

To cite one example: seeing a piece of green fabric could allow me to claim that the fabric is green. But maybe under different lighting conditions, the fabric looks blue. So now all I can claim is that under normal light conditions, the fabric looks green. But then how do you define “normal light conditions?” Presumably in relation to whatever my society would be inclined to call “normal” (be that in the light of the sun, indoors, lit by a lightbulb, or at dusk). At any rate, something extra-sensory needs to be brought in.

Rand was very hostile to philosophers like Kant, who took these sorts of concerns with common sense and used them to argue that reality “as such” was fundamentally unknowable; that what we call reality is the product of an interaction between the knower and what is known. She thought he was only motivated to make these sorts of arguments as a result of some sort of profound personal weakness, and once even went so far as to claim that he was the evilest man who’d ever lived.

It is troubling that such an important man has come under the influence of such a wildly dunderheaded epistemology.

When people talk about Javid and Ayn Rand, what they tend to be troubled by is the fact that he appears to have been influenced by her dogmatic libertarianism – which does definitely seem to be being borne out by the sorts of COVID policies he’s pursuing. But it is at least equally troubling that such an important man has come under the influence of such a wildly dunderheaded epistemology: you may as well put a Flat Earther in charge of foreign policy. When we’re dealing with a pandemic – or actually, any challenge at all – it is important that we strive to get our facts right: that we understand things like how quickly the virus is currently spreading, and what might happen if we don’t intervene. But the relation of the facts to whatever it is that we call reality, is never something all that obviously straightforward.

Even at a very basic level, our understanding of reality is saturated with the inheritance of our society and culture. But not even just that. The way we see reality – the way we experience it, the way we think and feel and reason about it – is determined, at least in part, by how we want it to be: by our goals, our hopes, our ideals. Our understanding of reality is “fraught with ought,” as the philosopher who coined the term “the myth of the given,” Wilfrid Sellars, once put it. I see the books on my bookshelf differently when I am looking for a particular book; I see the bakery next door differently when I’m hungry. In De Anima, Aristotle claims that “imagination” (phantasia) has taken its name from “light” (phaos), because “without light it is not possible to see.”

And so it is with the pandemic. Throughout the COVID crisis, it has consistently been a huge problem that people in general – especially the ones who are in charge, but also just like people with big platforms on social media and stuff like that – are for the most part either unwilling or unable, to discuss what’s going on except through the lens of how they would like things to turn out. Most obviously, the early response by the U.K. government was characterized by fantasies of the herd immunity that might spontaneously emerge, without too much pain, if COVID were simply allowed to spread unchecked.

This fantasy continues to exercise a powerful pull, as Javid and Johnson have now decided to lift all remaining restrictions even while cases are, once again, on the rise. It is as if they are unable to see all the evidence which speaks in failure of doing this, because of their fantasy of how the world ought to be.

“This pandemic is far from over,” Javid said to the House of Commons on Tuesday. “But we are increasingly confident that our plan is working, based on the foundations of personal responsibility and common sense.”

But it’s not just them. On the more fringe end of the COVID spectrum, pandemic denialists have been propagandizing against vaccines: getting a vaccine, after all, would require acknowledging that COVID was real all along. At this point in the pandemic, the general vibe in places like the U.K., where the vaccine rollout has been relatively successful is: deaths and hospitalizations are down, people want their lives back, it’s time to get things open again. But this has been met with a pretty constant wave of doom-mongering on the part of the people who spent the past year criticizing the government’s COVID response for not being sufficiently severe: they cannot see that any attempt to re-open society might be anything other than irresponsible, as all it will mean is that more people will die, and we’ll have to close everything up again.

Most troublingly, the July 19 announcement has been met with comments that veer close to anti-vax rhetoric, as politically “sensible” commentators. For instance, Carole Cadwalladr tweeted anecdotal evidence about double-vaccinated acquaintances nevertheless contracting COVID, with very little regard for what the point of these vaccines is supposed to be or how the immunity vaccines confer is actually supposed to work.

Perhaps some would disagree with this, but I just cannot see this stuff as being motivated by anything other than the psychological desire to see the Conservative Party proven wrong – even if it means having to stay locked indoors because of deadly COVID variants we can’t be sure we’ve got a perfect handle on yet forever.

There is no absolutely objective, uncontroversial, best strategy for ending the pandemic.

So what to do? If all this is correct, then there is no absolutely objective, uncontroversial, best strategy for ending the pandemic: the pandemic, as an event, intersects with a bunch of different, often radically conflicting goals – not least, for how society after the pandemic ought to look. These goals are also conditioned by how one sees the effects of the pandemic: whether one thinks the most important thing is deaths, or long COVID rates, or the impact of lockdown, or the inconvenience of having to wear a mask. But we don’t tend to articulate these goals – either to each other, or ourselves. Rather, we squabble about things like “the data,” which we take to be objective – and thus to “objectively” force a decision, one way or the other. But all this really amounts to is a sort of elaborate head-butting contest, where maybe if they’re lucky one of the participants will force the other over. If we really want to move forward from the pandemic, happily and safely, and get society back for good, we’re going to need to get clear on how reality is constituted first – and be honest about our own motivations.

How Media Drove Conspiracies About the Burari Deaths

The strange case of the Burari deaths was finally closed by Delhi police at the end of October. No signs of foul play, they concluded — the 11 members of the Chundawat family had killed themselves in a deadly ritual from which they believed their...