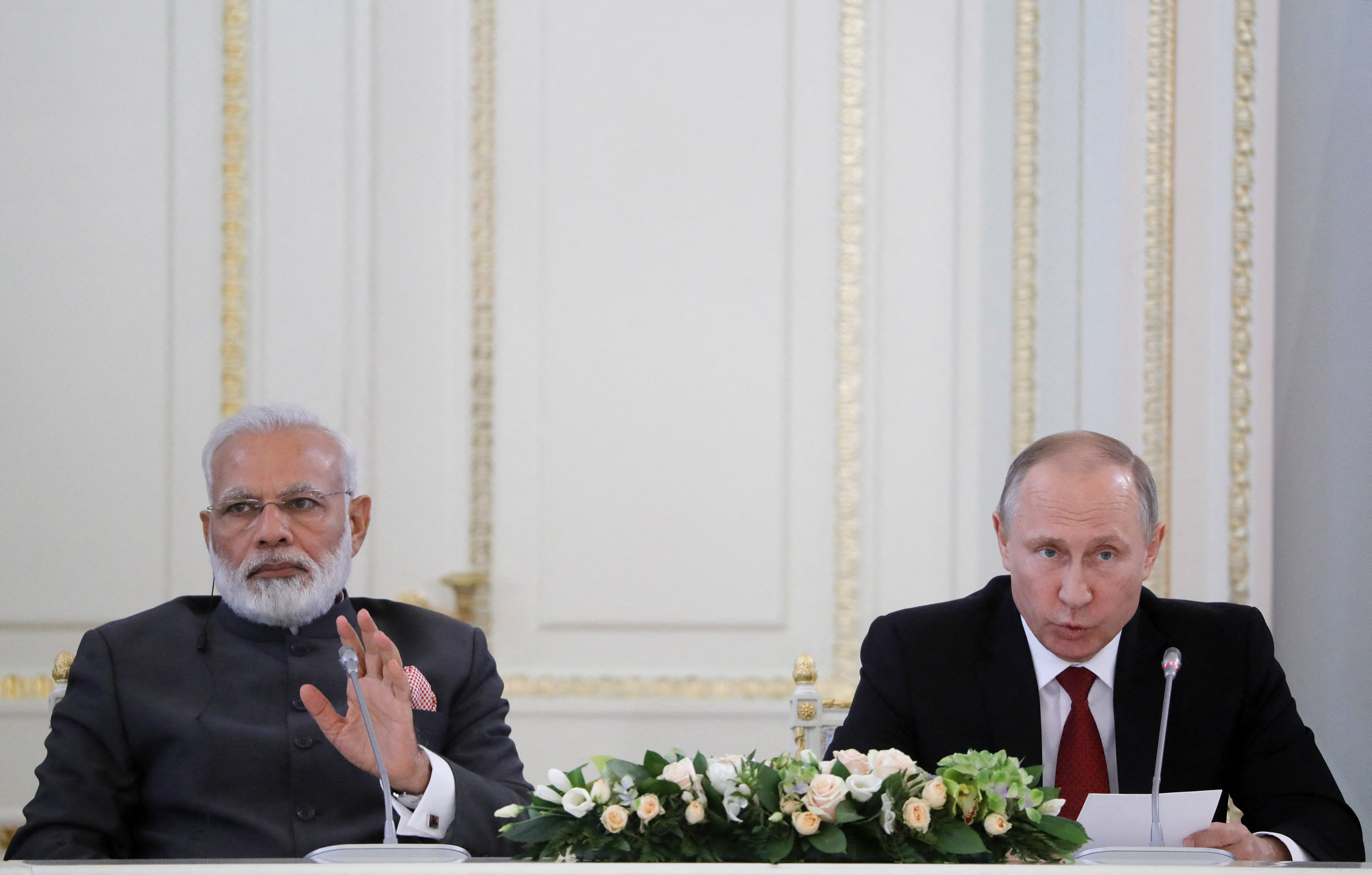 India's refusal to publicly disavow Moscow or show support for Ukraine has created a breeding ground for a variety of misinformation during Russia's invasion of Ukraine. A significant emerging narrative centers on how India's abstention from voting on a draft United Nations Security Council resolution condemning Russia indicates a strong government not succumbing to "Western propaganda." In turn, support for PM Narendra Modi's diplomacy skills is being picked up and boosted by IT cells — groups of pro-Bharatiya Janata Party (BJP) trolls in India.

When analyzing the hashtags #IStandWithPutin and #IStandWithRussia, Logically found that they trended in early March due to a coordinated effort to target India's Twitter discourse. Tweets originating from India used #IStandWithPutin nearly 41,000 times, and #IStandWithRussia more than 18,000 times over one 48 hour period. Reports indicated that there was evidence of coordinated inauthentic behavior (CIB) around these hashtags, and as a result, Twitter banned several accounts. 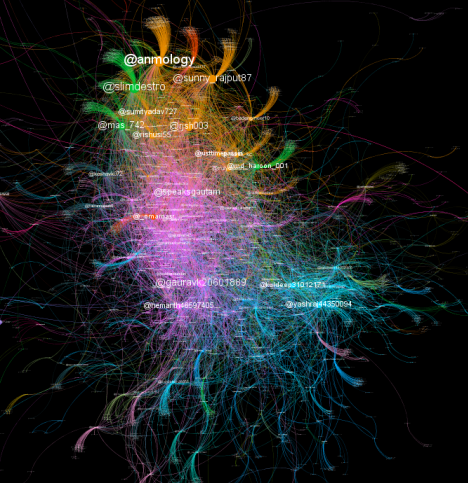 Network analysis of amplifiers of the hashtags. Image source: Gephi via Joe Ondrak

The graph above shows the clusters of accounts tweeting the hashtags; the bigger the name, the more connections with other accounts - which indicates mentions and retweets. The distinct shape, where smaller accounts plume from a larger node, illustrates accounts boosting the content of the larger accounts.

CIB and platform manipulation were likely adopted to alter the discourse since none of these accounts have significant enough followers to have such high levels of organic influence in a network of 4,000 accounts. 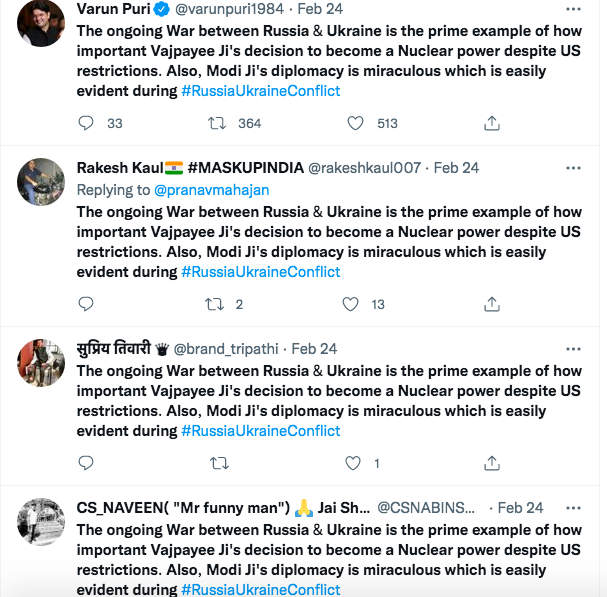 Another image with identical text was also shared widely. This image is a screenshot from Plane Finder, which tracks flights in real-time. Users claimed the screenshot showed the trajectory of Air India flight number 121 flying through a war zone to rescue Indian civilians in Ukraine. 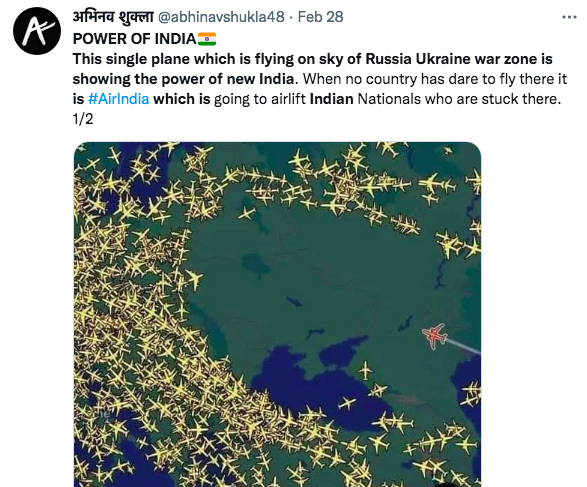 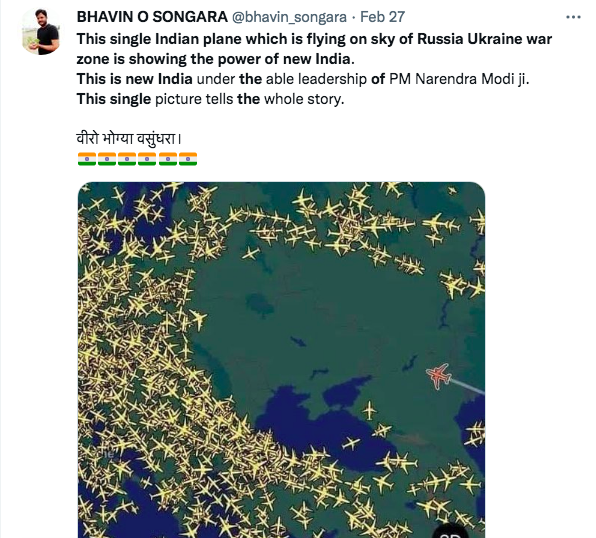 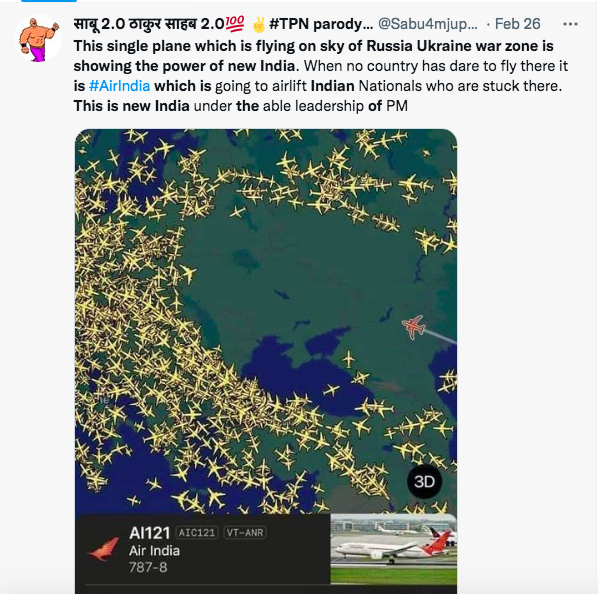 The image also featured on the news channel Republic TV, with the headline "Air India Lone Airliner To Brave Through War-ridden Russia-Ukraine Airspace." However, Alt News found that flight AI121 was heading to Frankfurt (Germany), not Ukraine. The screenshot taken was from a glitch in the app that was later fixed.

Accounts taking a pro-Russia stance also adopted copypasta behavior to criticize Ukrainian President Volodymyr Zelenskyy, claiming that he used Indian students as leverage. While these tweets don't explicitly talk about Modi, they do provide rhetorical support for a relationship between India and Russia. 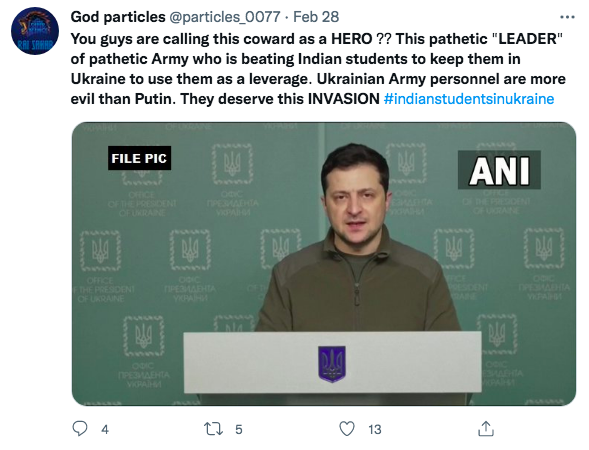 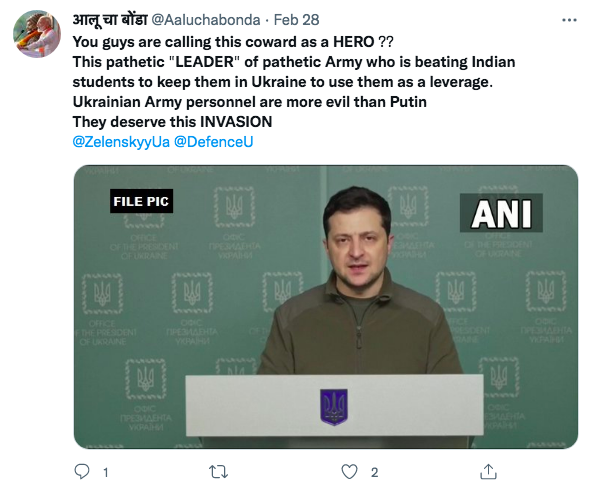 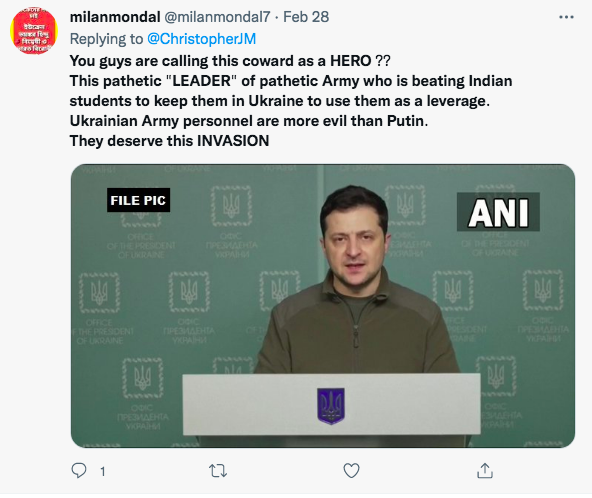 Experts claim India’s response to the war in Ukraine is unsurprising. ​​India has consistently acted in Moscow’s favor, and the two countries have maintained economic, strategic, and cultural ties.

As Somdeep Sen wrote in an Al Jazeera editorial: "Moscow saw its alliance with India as essential for offsetting American and Chinese dominance in Asia. And India always enjoyed the leverage that support from a major power like Russia provided in international politics."

When both Ukraine and Russia publicly asked India to take a clear stand, the Indian government asked for ​​"the UN Charter, international law, and respect for the sovereignty and territorial integrity of states." After abstaining from the vote, the government referenced the charter, stating, "all member states need to honor these principles in finding a constructive way forward."

The Indian government attempted to mount a defense to criticism over its neutral stance by citing the country's historical diplomatic differences with Ukraine: "You take a consistent anti-India position at the UN. You vote for UNSC sanctions against India after 1998 nuclear tests. You push for UN intervention on Kashmir after the abrogation of Article 370. You sell military equipment to Pakistan to use against India. Yet you want India's help," Kanchan Gupta, a senior adviser in the Ministry of Information and Broadcasting, tweeted after the vote.

In keeping with our findings of India-based accounts having a significant share in the conversation driving pro-Russian narratives, one of the central accounts originating from India in the CIB network has since been suspended from Twitter. Multiple accounts then shifted towards domestic Indian topics, with all accounts appearing to be pro-BJP.

It is not just India that has witnessed this activity. Marc Owen Jones reported other accounts – based in countries such as Kenya, South Africa, Nigeria, and the U.S. – spreading such narratives and using similar tropes. "One of the dominant themes of the hashtag appears to be polarization/adversarial: exploiting incidents of racism and western bias to try and undermine sympathy for Ukrainians and thus paint Putin as somehow standing up to the West," Jones posted.

"The use of trolls and copypasta CIB in the context of foreign relations is not new, but it also shows that leadership is likely to lean on this artificial opinion to justify actions," states Ishaana Aiyanna, A senior analyst at Logically. "It's part of a very niche aspect of using disinformation to astroturf consensus on an issue."

The unusual geopolitical situation India finds itself in creates numerous opportunities for bad-faith actors to manufacture that consensus on social media. Russia has clearly tried to use its troll farms to influence conversation, and it appears that domestic troll farms within India could dovetail with those narratives. This makes monitoring these trends even more important, but also more confusing – with larger geopolitical events like war, it’s entirely possible that foreign powers could amplify domestic influence campaigns, or vice versa. Logically will continue to monitor and unpick these trends as they emerge.