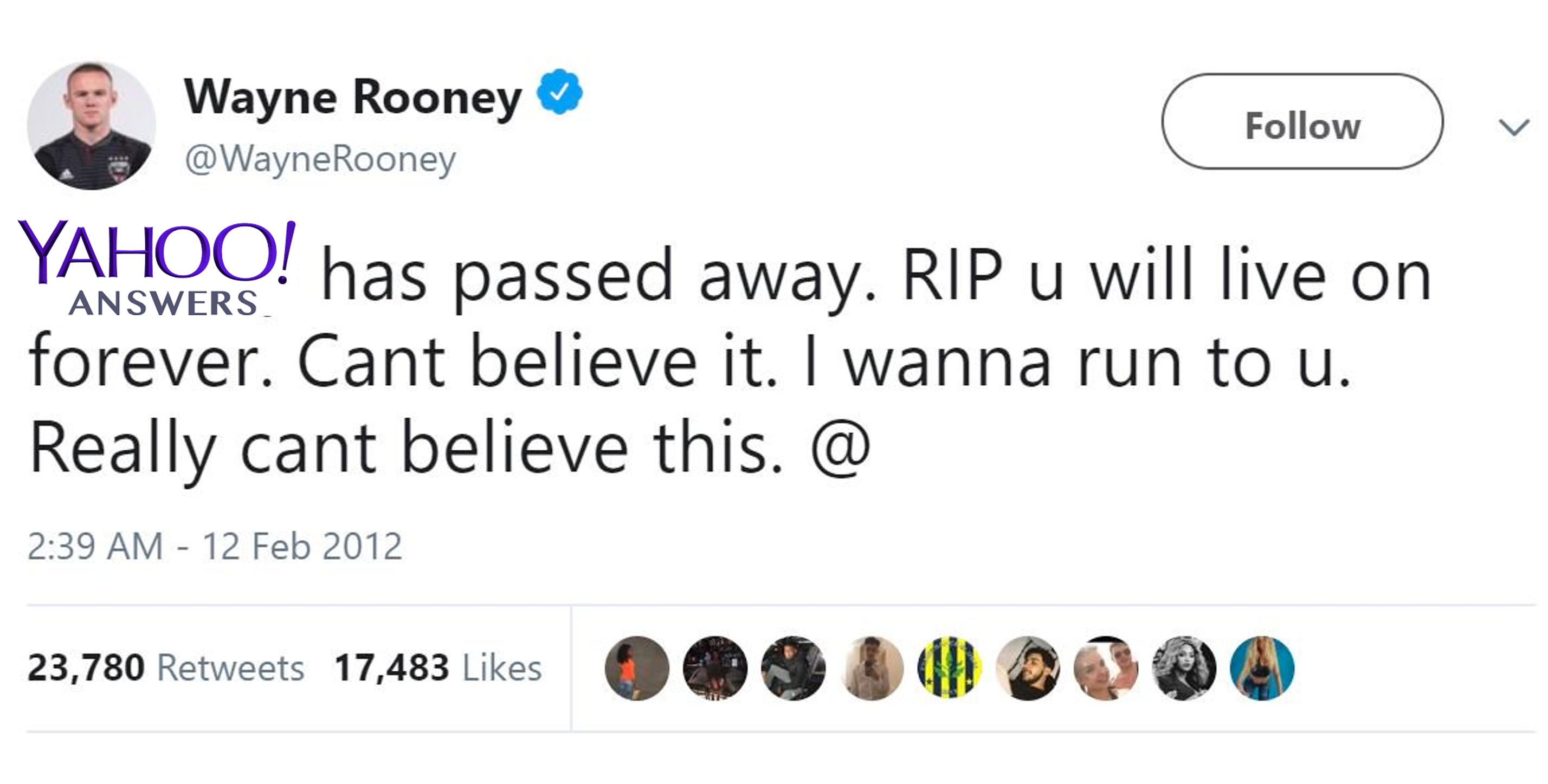 Yahoo Answers is shutting down. Once upon a time, it was a juggernaut that pulled 31 million visitors a month and easily swatted away competition from the likes of Google and Amazon, both of which launched (and later scrapped) their own Q&A services. Yahoo put out a statement saying that the site was no longer providing “premium trusted content” and would be powered down on May 4.

Though the reasons given are pretty vague, it’s not hard to guess what’s going on – server space is expensive, and the site’s had low usership for nearly a decade at this point. And managing user-generated content is notoriously risky. Verizon, Yahoo’s parent company, already pulled the plug on Yahoo Groups and Geocities years ago, obliterating more than a decade of internet history. They effectively killed Tumblr when they banned porn in anticipation of the FOSTA/SESTA act in 2018. Section 230, the U.S. law that protects social media platforms from liability for whatever their users post, may be up for review. So their perspective is at least understandable. Verizon looked at the graveyard of its Q&A platform said “nah.”

But it does mark another shift away from the internet of yore towards the internet of now. Yahoo Answers is a web 2.0 relic. It emerged onto the same playing field as Facebook, YouTube, and Wikipedia — the era when “app” entered our vocabularies, when we first saw an iPhone touchscreen for the first time and it felt like we’d actually made it to the future. The focus on user-generated content, a free exchange of knowledge between people all over the world, was a core goal of the early internet.

Y!A was a truly decentralized platform – there was almost no way of organizing the endless flood of questions and answers into some kind of hierarchy, other than a search function and few broad categories, which were clearly suggestions more than rules.

The mismatch between category and content here is a real treat. image: Yahoo Answers

In this morass, all questions were equal. Anyone could respond to anything. Which, of course, did not really lead to “premium trusted content.” But this was kinda the point.

When you think about it, it’s unhinged to ask a random anonymised sampling of humanity for actionable information. If you actually wanted to learn something, you’d go to some kind of authority. On Y!A there was absolutely no way of knowing whether you got an expert, an amateur, a child, a troll. The onlookers could vote for the best answers, but what good was that if everyone was as ignorant as you?

The mechanics of the site encouraged an unusual kind of misinformation: the kind that everyone knows is suspect. Users were incentivised to create unverifiable info as fast as possible. You earned two utterly meaningless points for every answer you posted, and you earned ten utterly meaningless points if your answer was voted to be the best. As you moved up the ranking system, you could attain the black belt of level seven – able to post hundreds of questions and thousands of answers per day. Leaderboards were in the sidebar, showing who was a “top answerer”. It’s worth noting that approximately zero people managed to parley their Yahoo Answers success into any kind of platform, or fame, or career. (Except perhaps the well-loved benign troll Ken M, but he was active on a dozen different platforms.) The highest-scoring user of all time was a grandma.

So it’s worth asking: what service was Yahoo Answers actually providing?

I asked Youtube creator JT Sexkik for his opinion. He discovered Y!A via the forum SomethingAwful when he stumbled upon a post compiling a bunch of Yahoo Answers screenshots, chief among which was the now-infamous how is babby formed.

“I'd just go digging around in there with a friend or my girlfriend, trying out different weird topics or misspellings and having a good laugh.”

The section on health and pregnancy had so many excellent misspellings that it gave Sexkik the idea to rejig the babby meme: how is prangent formed. The video was a smash hit, skyrocketing into the tens of millions of views, and producing possibly the most well-known piece of Yahoo Answers content of all time. (To this day, I cannot say “pregnant” normally.)

It is not trusted. It’s certainly not premium. I’d argue it’s barely even content

This is, I suspect, how a lot of people know and understand Yahoo Answers: a near-limitless repository of bizarre questions and even more bizarre answers. A meme factory. A way to harmlessly waste some time. Twitter users have been sharing their favourite oft-traded screenshots from Y!A in a live memorial, even though the site’s still got a few weeks yet on life support. Plenty have made tongue-in-cheek comparisons to the burning of the Library of Alexandria, but even Aristotle’s early writings on zoology didn’t face the hard questions about reptilian sexuality like Yahoo Answers.

Justin McElroy, one of the co-hosts of the advice podcast My Brother My Brother and Me, told the New York Times: “Yahoo Answers was a place for people to put questions they were too embarrassed to ask the people they knew in real life.” In other words, asking people that you didn’t know and weren’t sure would know the answer – that was the most important function of the site. You weren’t there to get “good” or “accurate” or maybe even “relevant” answers. You were either there because you had absolutely nowhere else to go – or you were there to take a voyage among the perpetually confused. The actual service of Y!A was the opportunity to rubberneck at the complete derangement of everyone else involved. It is not trusted. It’s certainly not premium. I’d argue it’s barely even content. It’s more about the unfiltered possibility of connecting to someone across time and space over whatever dumb thing that happened to be in your head at the moment.

If you believe you can do anything. image: Yahoo Answers

Nearly every service that Yahoo Answers nominally provided has been filled by some other thing. Reddit has a hundred different question forums, including r/Relationship_Advice (the advice is invariably “break up immediately”) Google Maps and Yelp tell you everything you’d need to know about local businesses. There’s plenty of online math software, or the STEM-savvy crew on Quora, that can walk you through each step of your calculus homework. WebMD has answers to your medical woes (the answer is always cancer). The algorithms that curate our personalised YouTube, TikTok and Facebook feeds are common knowledge. The premium content rises to the top, the cringe, for the most part, vanishes.

Yahoo Answers never pivoted to a premium experience. This choice was probably the nail in its coffin, abandoned by the majority of its users in the early 2010s for more interesting or useful places. But the same things that made it unviable as a platform also made it resistant to the forces which now shape our experience of the internet. Without any mechanics of virality, or sharing, or tagging, hateful or politically-motivated posts disappeared into the slag heap just as quickly as everything else did. Harassment is more challenging when there’s no way to comment on each other’s profiles, nor any way to coordinate a troll campaign. There was no clout to chase, no fame to be earned, no goals beyond ousting a sweet old granny from the top of the leaderboard.

By the end, Yahoo Answers was outclassed by other platforms. image: Twitter

Of course, you can still rubberneck at unpremium things in a few places. A common refrain on Twitter is “this website is free” when a public figure says something truly stupid, and it’s easy enough to find cringe compilations taken from TikTok or Twitch. But often those moments come from users who are aware of themselves as a performer – you’d have to be when you film yourself – and a post can always go viral, unless you’re choosing to limit your posts to a trusted circle. So we’re not often exposed to the unselfconscious rumblings from just anyone anywhere with any old problem. That was an early promise of the internet – to connect. And it’s harder and harder to find truly unmediated moments of connection like that, with no ulterior motive besides wanting an answer to whatever question you had.

JT was less nostalgic about it: “I mean... If you're asking Yahoo Answers for medical advice about pregnancy, you're already pretty lost. Maybe [shutting it down] is kind of doing those people a favor in that sense.” He might not be wrong. I pulled these screenshots from Y!A a couple of days ago:

If it feels like we’re losing a genuine chunk of internet history, it’s because we are. Goodnight, sweet prince.

Double Check: Who Is Colin The Caterpillar?

On Friday 16, April 2021, I asked a dozen American citizens about the caterpillar-shaped chocolate cake familiar to most, if not all, Britons. Surprisingly — or unsurprisingly, I can’t decide — most of my interviewees didn’t know what on earth I was...