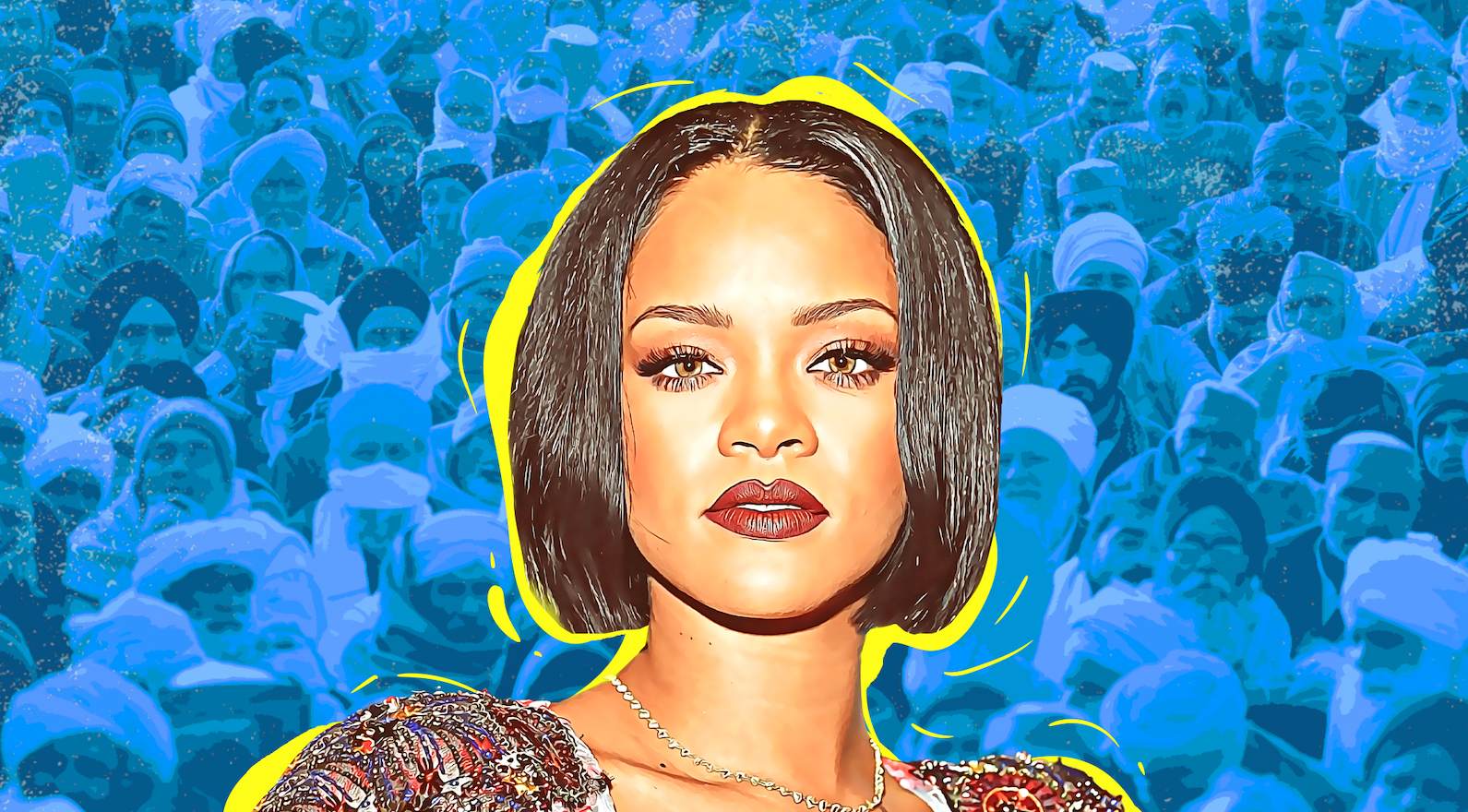 India’s nearly half-year long farmers agitation received international attention earlier this month when Rihanna tweeted about the protests. The 32-year-old Barbados-born singer’s tweet asked “[W]hy aren’t we talking about this?!” along with an article from CNN which reported that the Indian government was blocking internet access around various agitation sites in the wake of the clashes between protestors and Delhi Police which occurred on January 26, the country’s Republic Day. In 2020, the Indian parliament passed three controversial agricultural laws that led to thousands of farmers to take to the streets, mostly peacefully, in and around India’s national capital. Other international figures like a lawyer and niece of the Vice President of the United States, Meera Harris, Swedish climate activist Greta Thunberg, and Lebanese-American media personality and actor Mia Khalifa joined in and tweeted in support of the farmers.

Rihanna’s tweet was welcomed by some and condemned by others. Such was the traction her solidarity received that the Ministry of External Affairs was compelled to put out a statement calling these tweets “sensationalist social media hashtags and comments” that are “neither accurate nor responsible”. The tweet by Rihanna also unleashed a series of false claims about the singer, which were supported by morphed images and edited videos. Right-wing organizations tweeted burnt effigies of celebrities, including Rihanna, saying they would “not tolerate interference in internal affairs”. Trolling also took a misogynistic turn when people started “praising” Chris Brown, Rihanna’s ex-boyfriend, for physically abusing her in 2009. Some even claimed that Rihanna was working closely with Pakistan and was paid by ISI for tweeting against India, and hashtags like #RihannaSoldOut started trending on Twitter. But speculations that the Grammy-award winning singer was paid for the tweet did not stop there, and an article from ThePrint added fuel to the fire.

On February 4, ThePrint, an Indian media outlet that is generally considered reliable, published an article claiming that the Poetic Justice Foundation (PJF), a Canadian organization, played a crucial role in consolidating support to start a campaign to defame India. The claim was supported only by unnamed “sources” from the “security establishment”. The article further stated that a PR firm named Skyrocket paid Rihanna $2.5 million to tweet in support of the protest. This assertion was picked up by several organizations (see here, here, here, and here) to spread this claim further.

This claim was probably made on the basis of a “toolkit” which was shared by Thunberg, that was allegedly created by PJF. The Delhi police and the government are reportedly investigating the toolkit as evidence of an “international conspiracy”. An FIR was lodged against the “unknown makers” of this toolkit. But is it as sinister as it’s made out to be? The answer is no. A toolkit is primarily “a booklet or a document created to explain a cause or an issue”. It is basically used to garner support, educate people about an issue, and tell them how to spread the word responsibly. The toolkit shared by Thunberg gives a detailed explanation of what the protest is about and how one can help. A Twitter user, Ashmita Ghosh, emphasizes how “normal” it is for activists to use toolkits, stating: “Every organisation from UN bodies to campaigning platforms to national & international NGOs uses them”. Social media manager Christina McDermott told Logically: "A social media 'toolkit,' is essentially a bunch of graphics which can easily be posted to places like Twitter and Instagram containing links to resources where people can find out more about a certain topic (e.g. systematic racism, the Black Lives Matter movement, etc.)"

McDermott goes on: "Toolkits aren't bad things per se. In fact, for topics such as the farmers' protests in India, I'd say that they're a great way of providing context and educating a Western audience who may not be as aware of what's happening there, or in the Global South as a whole. However, they're extremely prone to bias - you're often guiding your audience towards news articles or resources which reflect one particular view on a situation which could lead to an oversimplified analysis of a complex political situation. Opinions on social media are very often black and white, unlike politics which is full of grey areas."

OpIndia, an Indian right-wing news organization, remained convinced the toolkit was evidence of an international conspiracy, going a step further and giving a “step-by-step breakdown” of the alleged campaign to defame India.

This is a snippet from Swarajya, but it’s important to note the Economic Times link actually takes you to a Times of India article

If ThePrint’s initial accusations were not enough, the site also published another article titled “Rihanna just got a crash course on Indian democracy,” again accusing Rihanna of taking money.

It’s generally expected that a credible organization would make such a serious accusation only after properly verifying its facts, but sadly this was not the case. On February 6, two days later, ThePrint published an article stating that PJF replied to their queries and said that the organization did not pay any celebrity, including Rihanna, to tweet, but it did encourage the entire world to share the issue and increase awareness. The organization posted similar statements on their social media accounts.

This entire episode has brought some glaring issues to the surface on the loose handed manner in which media organizations report on issues of national importance. That ThePrint claimed that Rihanna was paid to tweet, without any substantive evidence whatsoever, is not just harmful, but also sets a dangerous precedent. The article wherein the organization made this claim has not been updated or taken down since the organization learned that PJF did not pay Rihanna, leaving huge space for misinformation and disinformation to spread. This is also a double-edged sword: it doesn’t just hurt the credibility of the media organization but also hurts the legitimacy of those standing in support for the protestors. Misleading headlines and unverified information can lead to real-life harm, as we witnessed recently in the United States. It is the responsibility of journalists and media organizations to verify every piece of information, big or small, before it’s published. When information is picked up and regurgitated online, we cannot predict the reach of that information. So has ThePrint learned its lesson? It seems not: the outlet published another article stating the Indian government is looking into the “toolkit” episode, particularly organizations allegedly part of an international conspiracy to defame India. Again the only citations are from unnamed “sources” claiming extremist organizations are being paid by the ISI to create disturbance in the country. You’d think they provide some proof this time around, but alas that didn’t happen. These are serious claims, and evidencing them is paramount.

The Family Man 2’s Slick Portrayal of a Tech Dystopia

A week ago, Indian Twitter was buzzing with praise for the new season of espionage thriller The Family Man 2, from creators Raj Nidimoru and Krishna DK. However, beyond the laudatory reviews, the show created a stir among India’s Tamil community...