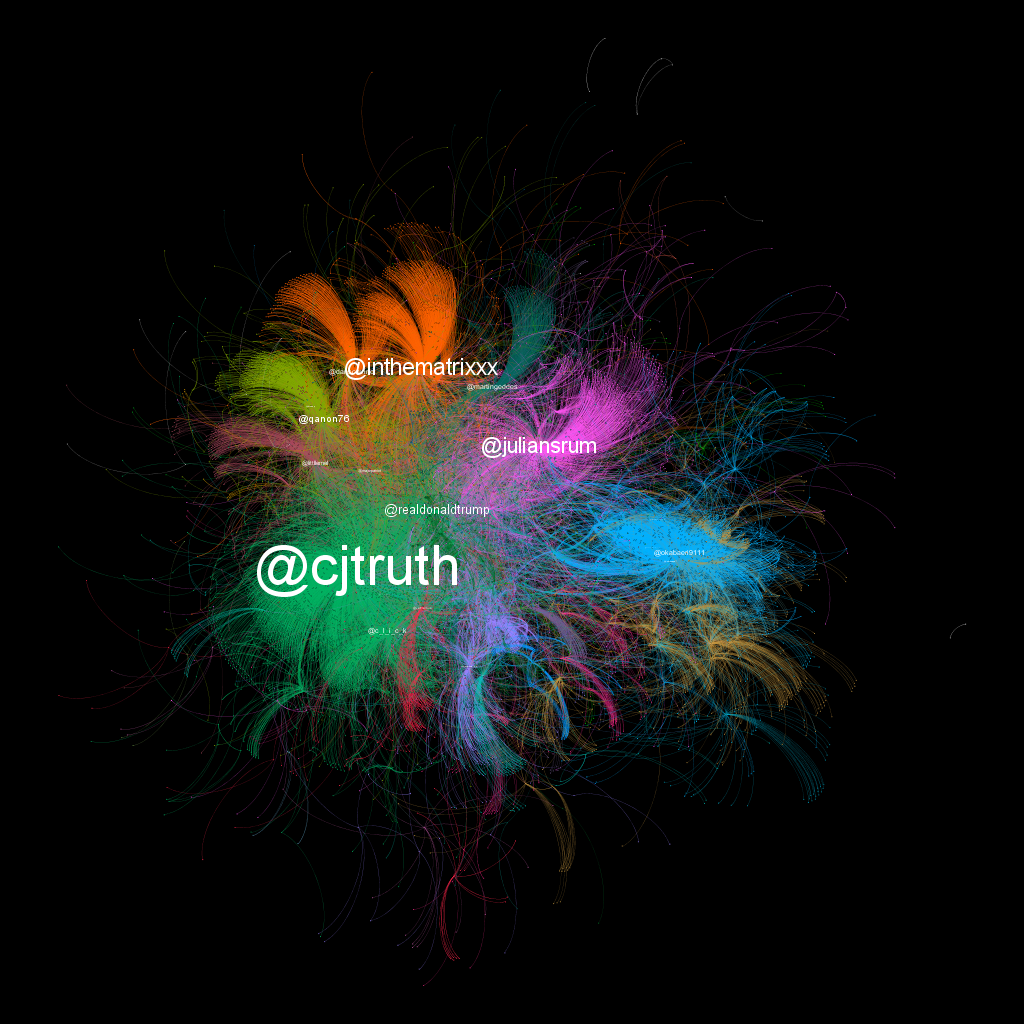 President Trump gave a press conference yesterday in which he appeared to give his tacit support to the QAnon movement: a growing, far-right political movement, existing largely online and grounded in the baseless conspiracy that Donald Trump is secretly fighting a cabal of satanic cannibal paedophiles.

When asked what he thought about the QAnon movement, Trump said, “I don’t know much about the movement other than I understand they like me very much, which I appreciate.” Despite repeatedly claiming not to know much about the movement, Trump also correctly identified the length of time QAnon has been active and appeared to show a deft understanding of QAnon talking points, describing QAnon followers as “people who love our country” opposed to a “radical left philosophy that will destroy this country.”

A Logically analysis of social media activity immediately following Trump’s statements reveals the remarkable extent to which his comments have emboldened the movement, which the FBI has described as a domestic terrorism threat.

Trump was previously asked about QAnon on August 14th, shortly after Marjorie Taylor Greene, a vocal QAnon supporter, won the Republican nomination for a house seat in Georgia. Greene eventually distanced herself from the movement, but not before receiving praise from Trump as a “rising star” of the Republican Party, which led to his being questioned about his views. Trump dodged the question, leading to increased speculation about the degree to which the Trump campaign would be openly courting QAnon supporters in the lead up to November.

Trump’s comments yesterday seemed to leave no further room for doubt however, and social media chatter around Trump’s tacit endorsement of QAnon spiked to over 120,000 mentions in just three hours. For comparison, Trump’s earlier dodging of the QAnon question on August 14th generated around 50,000 mentions over the course of a day. 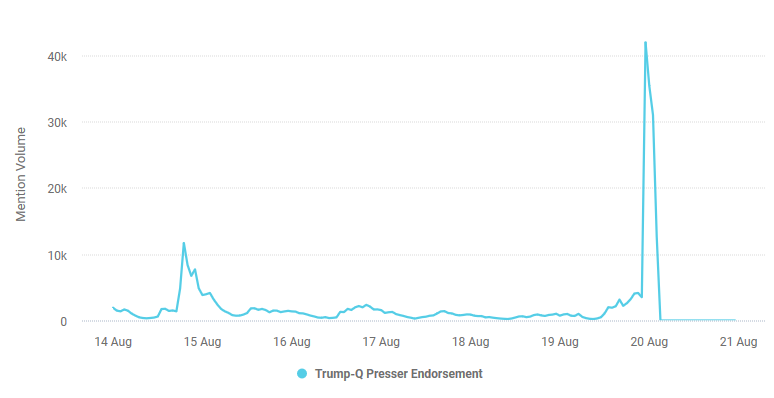 The disruptive political potential of QAnon, as expressed in social media activity, is further demonstrated by comparing the impact of Trump’s comments with mentions related to the third day of the Democratic Party’s nominating convention. Logically’s analysis shows that, although the DNC peaked higher on August 20th and received more coverage overall, Trump’s comments around QAnon outperformed the DNC on social media over those three key hours by 121,000 to 81,000. 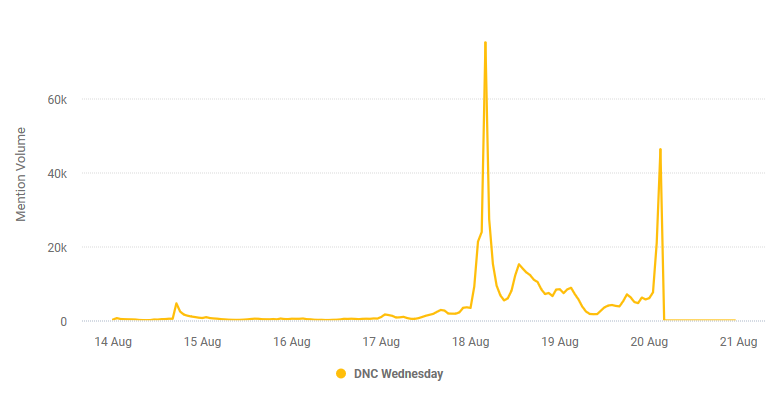 Further analysis of these networks reveals the shocking extent to which conversations about QAnon happened in two completely different spheres. The graph below shows conversations about Trump’s comments between different groups of verified journalist accounts on Twitter in green, blue and orange, and between QAnon supporters in pink. Each node represents a mention, and each line a link between a mention from one account and another. The visualization is a stark demonstration of the extent to which QAnon discourse occurs in two hermetically sealed echo-chambers: journalists and those interacting with them in one, and avowed QAnon supporters in the other. 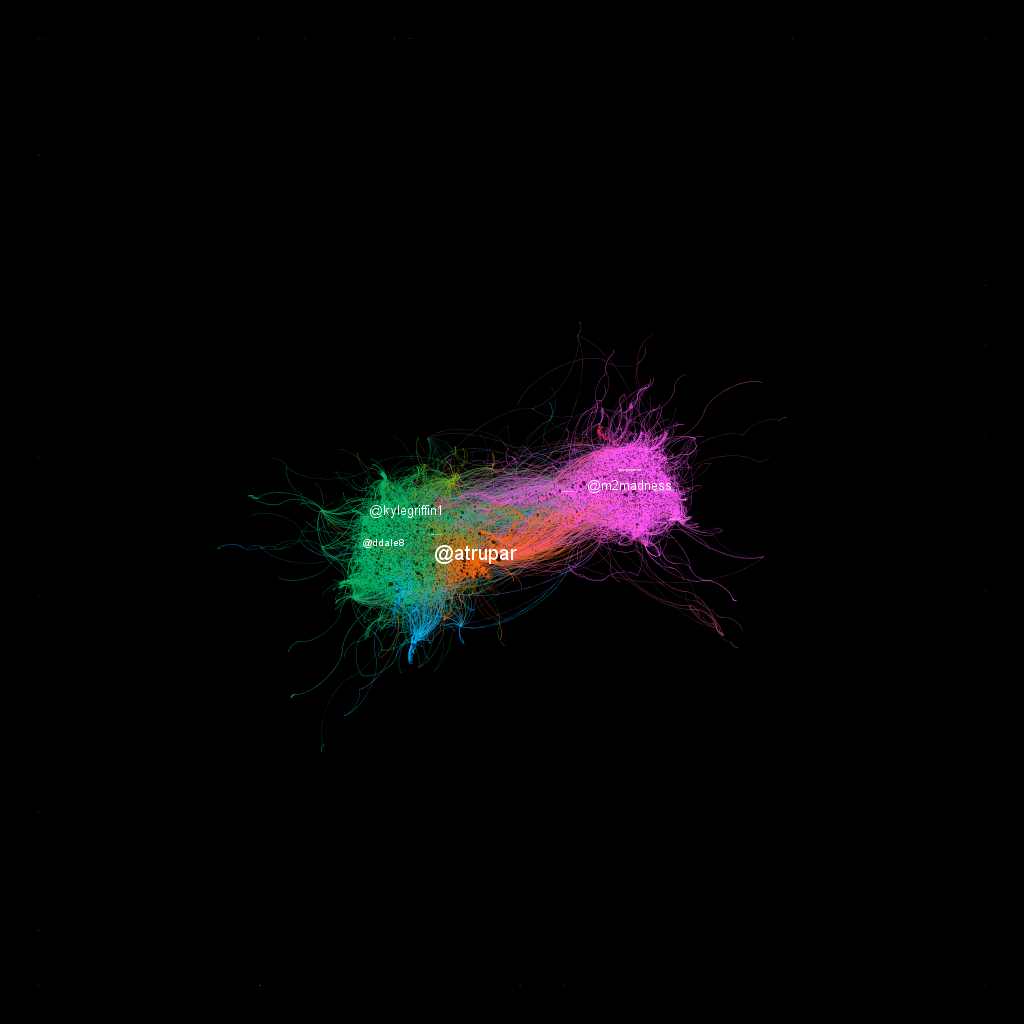 The tight-knit nature of QAnon supporters poses a number of challenges for those who wish to understand and ultimately combat the spread of misinformation, particularly in the run up to November’s election. As with any effective echo chamber, once a QAnon supporter moves into the silo of like-minded conspiracists it is extremely difficult to reach them, both in terms of presenting counter-disinformation in places where they will find it, and in terms of their receptivity to those arguments.

However, another less discussed problem which arises from the closeness and relative seclusion of QAnon friendly spaces on the internet is that long-standing and prominent accounts supporting QAnon are now so firmly embedded in the QAnon network that they are able to communicate with their followers without directly mentioning QAnon or any of the related terms which might cause a platform’s filters (or an investigator’s tools) to flag their accounts.

The above graph only displays accounts which directly mention QAnon or related terms and hashtags (most notably #wwg1wga, ‘where we go one, we go all’, QAnon’s political rallying cry of choice). The graph below displays additional activity from networks associated with identified QAnon supporting accounts which did not explicitly mention QAnon or related terms, but which nonetheless flared in the hours following Trump’s comments.

Below is an example of how these accounts push the QAnon agenda without making explicit reference to the conspiracy, or using hashtags or labels which might draw unwanted attention, saying only “Thank you Mr. President” and touting their availability for interviews along with a clip of Trump’s comments. 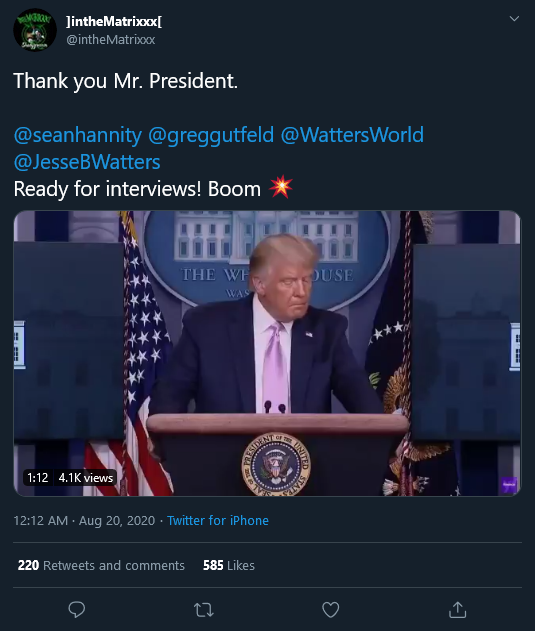 The story inside the Q-echo chamber

It is no exaggeration to say that the QAnon movement has been waiting for this day since its inception in 2017. The feeling across the movement is nothing short of jubilant, as exemplified by the following heavily shared tweets in which users celebrate what they see as a defining moment in the story of the QAnon movement. 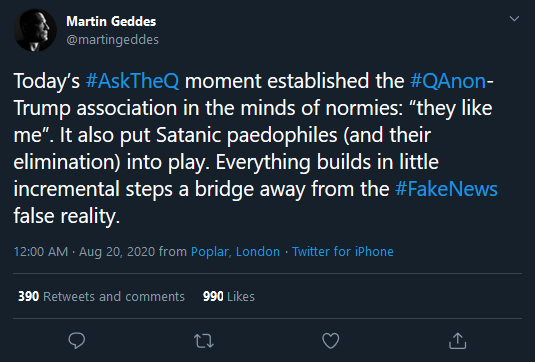 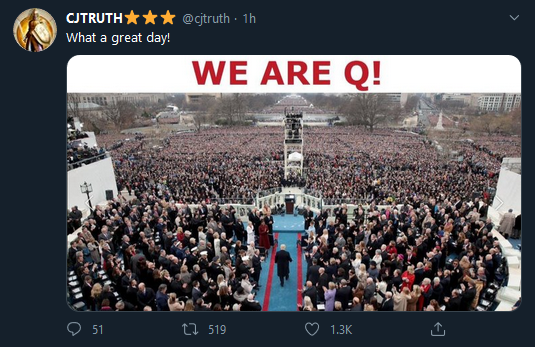 Many went further than just expressing joy at the idea of Trump’s approval, and sought to frame Trump’s comments as unsubtly coded messages of strong alignment and support from the President directly to the QAnon movement. Below is an example post from 4chan, a hub of pro-trump and pro-Q activity, in which the user explains how every line of Trump’s comments was carefully constructed to communicate his support of the movement, while also providing ‘plausible deniability’ for the media. 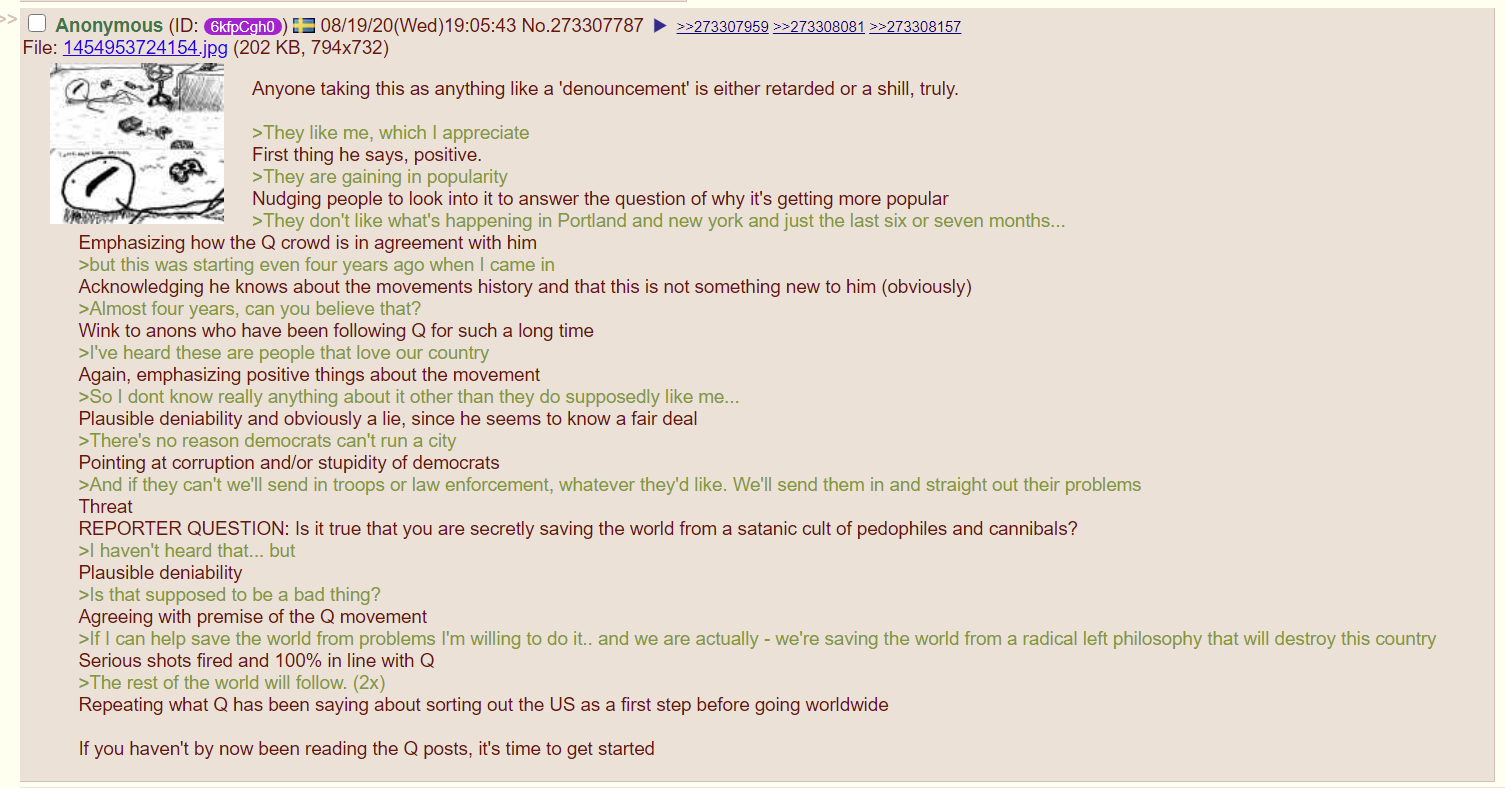 Trump was, indeed, very careful to allow himself room to distance himself from the QAnon movement in the future. This is not the last time Trump will be asked about QAnon before the election, and his future responses are likely to have an outsized impact on the effect of the movement as a political force leading into November. With the Republican convention coming up next week, QAnon supporters, as well as the Q-watchers here at Logically and elsewhere, will be carefully monitoring the comments of Republicans for signs of support or disdain for the QAnon movement (Jeb Bush is already leading the charge of Republicans openly disavowing QAnon and its supporters).

QAnon has grown beyond being a fringe conspiracy theory into a full-blown fringe political movement, with its own networks, tactics, and organising principles. Its ideology is confused and febrile, its core beliefs palpably not only false but absurd, but QAnon can no longer be considered a laughing matter. Key voices in the movement are already laying the groundwork to write off any QAnon-related violence as a ‘false flag’ attack to discredit the movement. QAnon and its parent conspiracy, ‘Pizzagate,’ have already resulted in real world violence and threats of violence (not to mention dozens of harrowing stories of people whose friends and families have been taken in by QAnon’s cult-like operation). 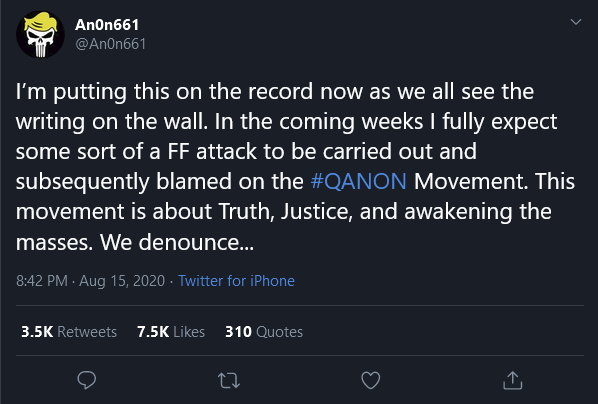 Of additional concern is the increased activity of Q themselves. Before Trump’s press conference, the community had been growing restless and concerned about a long period of silence in Q’s posting pattern, which had ended on July 31st begun again with a single post on August 17th. Last night, however, Q posted five times in quick succession. The first of which, posted during Obama’s speech at the DNC, leaves little in the way of ambiguity and should be of serious concern to those monitoring the movement. 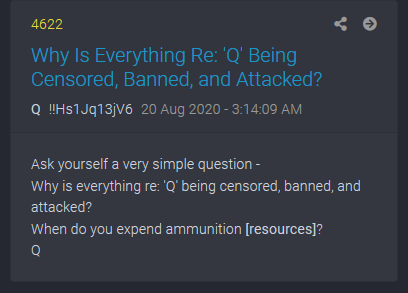 The QAnon movement is growing in strength, sophistication, and following Trump’s comments, in confidence. When Logically started following QAnon closely we wondered whether they would have a significant impact on the 2020 election. The only question now is how dangerous, how widespread, and how decisive that impact will be.

A common refrain of many QAnon believers is the claim that no one has ever been hurt as a result of their beliefs. They feel that following the conspiracy theory is simply a “hobby” akin to playing an augmented reality game, or that they are simply...