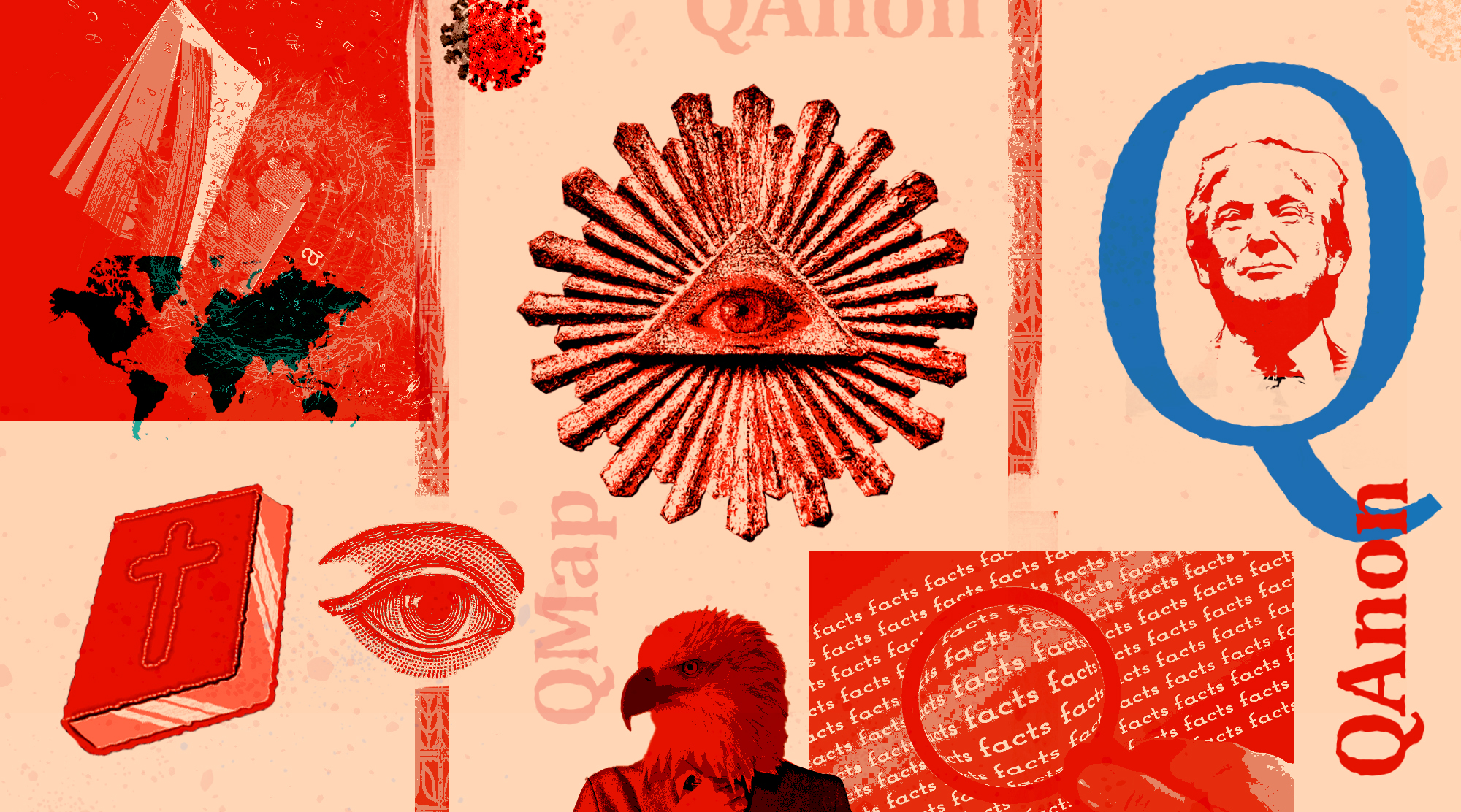 A Logically investigation identifies a key QAnon figure as New Jersey resident Jason Gelinas. The investigation ties QAnon properties to a company owned by Gelinas, an information technology specialist who has held prominent positions at both Credit Suisse and Citigroup.

Ever since the shadowy figure known as Q made his first appearance on the 4chan imageboard in October of 2017, the author’s identity has remained a mystery. Since then, Q has posted thousands of ‘drops,’ converting legions of followers to the belief that Donald Trump is leading a global fight against a satanic cabal of child trafficking elites, commonly referred to in the QAnon world as the ‘Deep State’.

Over the years, Q’s posts would move from the 4chan forum to 8chan, and finally to its later iteration, 8kun. But these forums weren’t where most of Q’s followers would go to access the drops: most would find them neatly compiled on a site called QMap, now the main platform on which Q’s drops are published. For years it was believed that QMap was an endeavour that was independent of both the chan forums and the person or people posting Q’s drops, but recent discoveries concerning an IP address behind QMap raised questions as to whether Jim Watkins, the owner of 8chan and 8kun, an elusive figure in his own right, could also be Q. As some QAnon researchers have pointed out, however, the story of Q’s operations does not end with Jim Watkins.

In the world of QAnon, the site qmap.pub is something of a sacred text. It’s a site designed to collect Q’s posts on other message boards and collate them in a searchable database; over the years, it has grown to include glossaries on themes, profiles on people named across the drops (handily sorted into ‘Evil’, ‘Traitor/Pawn’, and ‘Patriot’), and even a prayer wall.

Most followers of QAnon tend not to visit Q’s posts on 8kun and the ‘chan’ boards where they are initially posted (the vernacular used on those sites is deliberately exclusionary and newcomers are often put off). This makes qmap.pub a crucial port of call for all QAnon information and a major node in how the movement disseminates its lore. The site has been hitting over 10 million monthly users since April of this year.

The developer of QMap has been known only as ‘QAPPANON’ since the launch of the site in May of 2018. They have a successful Patreon where they regularly post and update their following on the running of the website. They pull in over 600 patrons and a $3,320 a month income - although there is a $4,000 a month target for ‘running costs’ of the website. In addition to the website, QMap also had an accompanying app on the Google Play Store (for $2.99) until it was removed in May this year as “harmful content”. The user QAPPANON is synonymous with qmap.pub, acting as its sole developer and mouthpiece.

The QAnon community recognizes the importance of QAPPANON and how central QMap is to how the movement functions. In a recent campaign to deplatform QAPPANON from Patreon, QAnon power-influencer Praying Medic leapt to their defence, calling on his nearly 400,000 Twitter followers to help (and funnelling them towards QAPPANON’s Patreon). In addition, Praying Medic linked to the Patreon on his podcast, describing it as the “Qmap Patreon”. 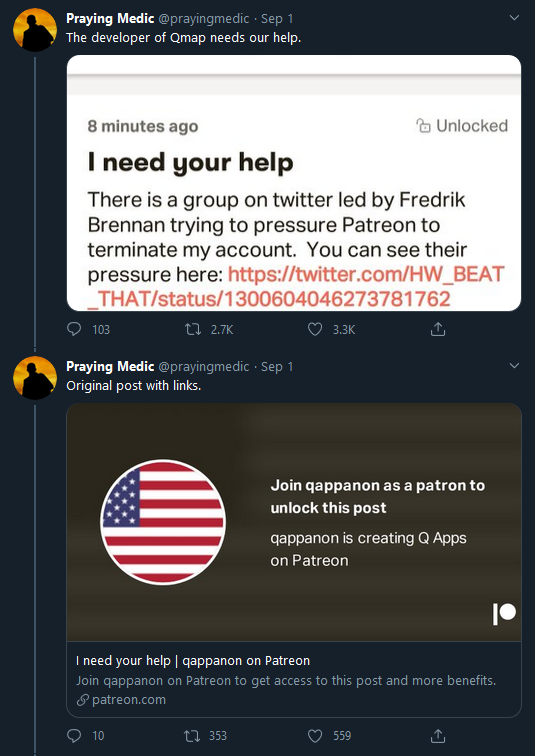 It has been suspected that the owner of 8kun, Jim Watkins, is Q and perhaps QAPPANON. A shared IP address for 8kun and qmap.pub was viewed as a significant link between Watkins and Q, placing him as a figure doing more than just hosting Q’s preferred method of communication. If Watkins was not in fact Q, his hosting of QMap suggested that at the very least, he could “become Q whenever he wanted”. When approached by Daily Dot, however, QAPPANON stated “they are ‘not associated with Watkins’ and that they moved to VanwaTech because “QMap suffers denial of service attacks regularly, hence the need for a content delivery network that could stop it.”

Our investigation can reveal that QAPPANON is not Watkins, but instead a New Jersey man in his forties with prominent roles in technical analysis and IT security for the banking sector.

QAPPANON’s email address was initially discovered during our investigation into QMap’s translation efforts and international reach. A now-deleted Facebook post allowed us to trace the email to a CNET download cache for the QMap app as well as a new app in development called Armor of God.

The email found here in the URL serves as a point of contact in a call for translators for qmap.pub. Importantly, the post here states that “Q is looking for someone” rather than “QMap is looking for someone.” As Watkins’s connection to QMap has resulted in speculation that he could be Q, the connection here should not be ignored. However, this may be the result of Shirley_is believing that Q speaks through qmap.pub. What this post does indicate is that QAPPANON is directly responsible for hiring translators for QMap, and therefore has employees.

An extraction of QAPPANON’s email address from the URL led to their developer profile and list of created apps on CNET. While the qmap app is well known at this point, Armor of God is relatively new, having been uploaded on the 18th June 2020. 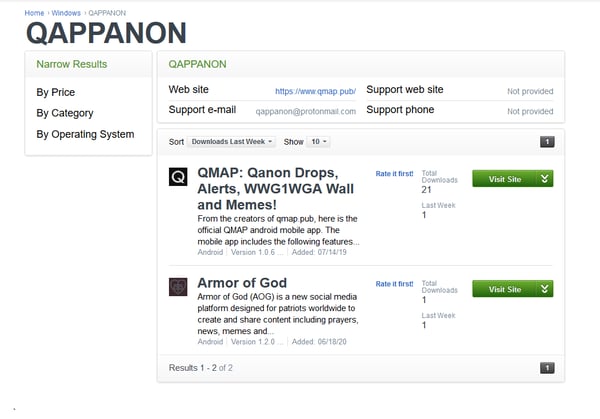 When investigating Armor of God, we were met with a bare sign-up screen. Attempts to register and investigate the platform both on desktop and mobile versions were met with login errors and no email to confirm registration or change passwords. This led us to believe that, while downloadable on app stores, the platform is not yet up and running.

Proof-of-concept videos on QAPPANON’s Youtube channel reveal what appears to be a hybrid platform functioning as a QAnon research hub, Facebook-like, and Twitter-like. Archived versions of the Armor of God about page, privacy policy and T&Cs from the Wayback Machine revealed more information. 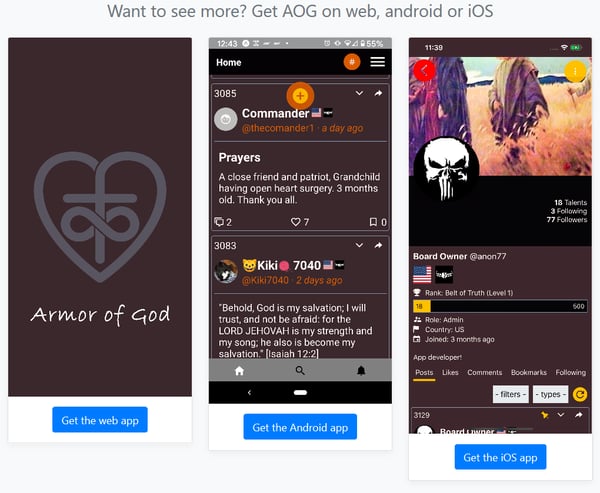 Following the “get the Android app” link led to the Google Play store. Here, we can see that QAPPANON is listed as the profile responsible for uploading the app. 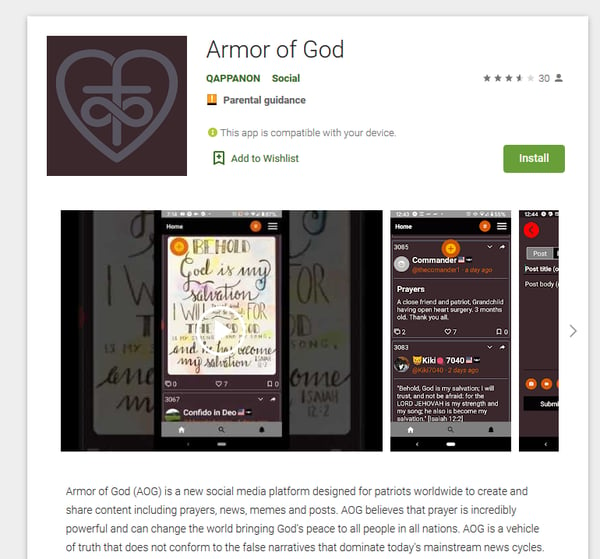 However, further down, we can see a different entity listed as the developer of Armor of God: Patriot Platforms. 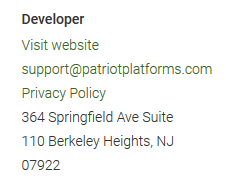 Therefore, far from being a rogue developer creating QMap, QAPPANON has a company—and a company must be filed for.

Visiting Patriot Platforms’ website reveals a plain splash page with a link to their support email.

We cross-referenced the listed premises of Patriot Platforms to a PO box at a New Jersey Post Office.

This was corroborated with a search for business details.

From here, we also found a name, Jason Gelinas, after which we were able to narrow this down to Jason J. Gelinas in New Jersey, whose listed phone number correlates with the one belonging to Patriot Platforms LLC.

Jason J. Gelinas, an information technology specialist from Berkeley Heights, New Jersey, whose CV lists prominent positions with both Credit Suisse and Citigroup, is the founder and sole employee of Patriot Platforms LLC, which is credited as the developer behind the QMap and Armor of God platforms. Gelinas’s home address is, in fact, a mere seven-minute drive from Patriot Platforms LLC’s listed P.O. box, also in Berkeley Heights; further investigation shows the connection between Gelinas’s personal WhatsApp and Patriot Platforms’ listed phone number. 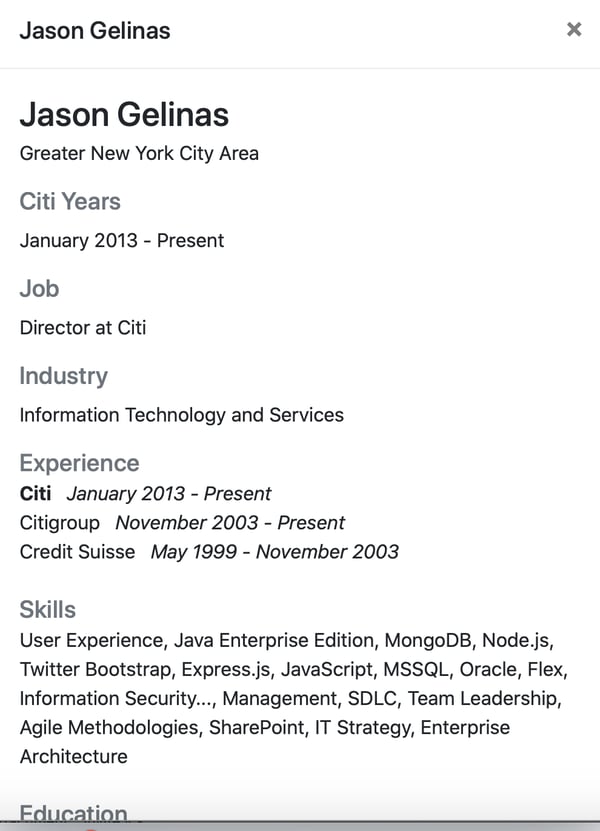 The distance between property owned by Jason J. Gelinas and Patriots Platforms’ postal address (P.O.Box) is only a 7 minute drive. 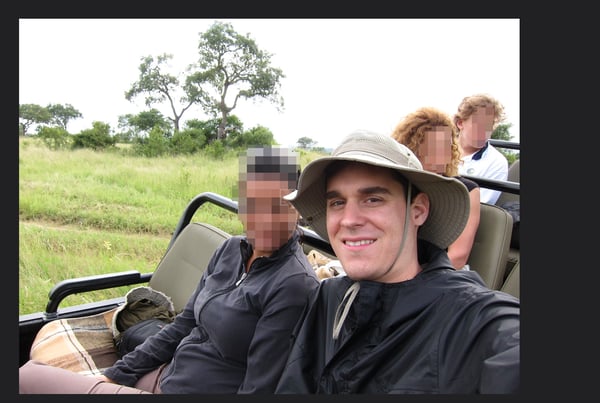 Crucially, echoes of Gelinas’ username “jjgelinas77” can be seen in the screenshots for Armor of God - “Board Owner @anon77” works as an app developer. 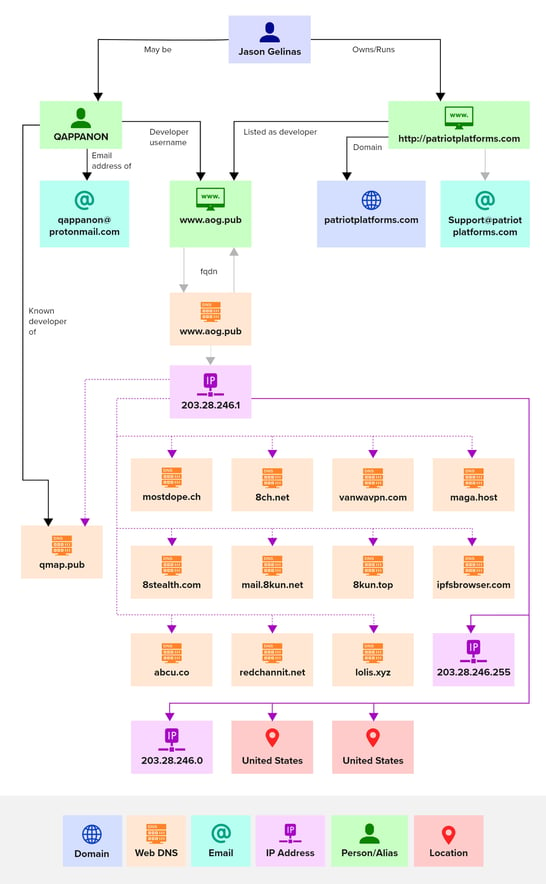 So does that mean Gelinas is Q? No. In fact, it’s quite unlikely that someone such as Gelinas would have been involved in the very early (i.e. 4chan) days of Q. It does suggest, however, that after the success of the QMap platform since it was launched in 2018, a direct line was opened between Watkins and Gelinas, as well as Q (if we are to believe that Q is actually an independent third party and whether the Q from the early days is the Q of today). Indeed, as creator and former owner of 8chan Fred Brennan told Logically, Watkins essentially operates Vanwatech, the company hosting both 8kun and QMap, meaning that he can offer Gelinas free or negligible running costs for QMap, which then reframes the monthly income from Patreon.

So how close is all this to Q? In a nutshell, it’s closer than we’ve ever been. In fact, recent Q drops discussing the ‘Armor of God’ prayer more and more frequently coincide almost perfectly with attempts to launch the ‘Armor of God’ platform, giving this the feel of a coordinated PR campaign. Of course, that could be down to the tendency among Q’s followers to use and re-use the same language, but given the established connection between Gelinas and Watkins, the fact that this timing suggests a level of coordination should not be dismissed.

Update: Citigroup responded to a request for comment from the journalist William Turton, and subsequently confirmed that Gelinas has been placed on paid leave pending an internal investigation. More here.

Are the Mass Christian Conversions in Punjab Fact or Fiction?

On January 17, weeks ahead of the state assembly elections scheduled in the northern state of Punjab, the hashtag #Christianization_of_Punjab started trending on Twitter. Users claimed that Punjab’s Hindu population was disproportionately converting...