Part I: Pride, Prejudice and Pink-washing in Kashmir 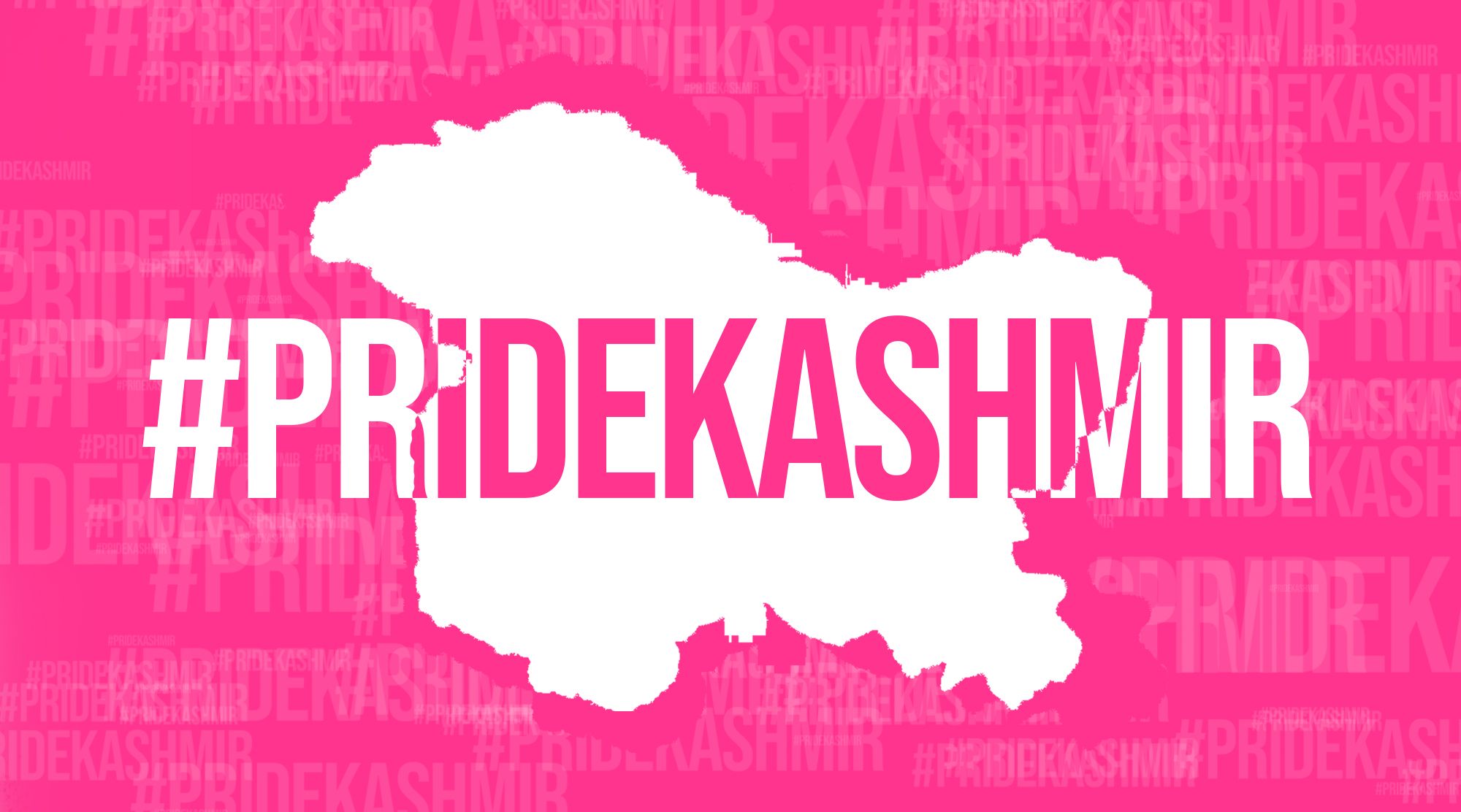 In October 2019, masked protestors disrupted an event organized by the School of Oriental and African studies at the London University featuring activist Kavitha Krishnan and queer activist Professor Dibyesh Anand as panelists. Kavitha Krishnan had just returned after a fact finding mission in Kashmir about the violations that had happened following the repeal of Kashmir’s ‘special status,’ an important shift in the region’s legal power to set its own constitution.

The protestors held up rainbow flags and chanted “Gay for J&K” (Jammu and Kashmir) and insisted that Article 370, which grants Kashmir the autonomy to determine its own laws, is homophobic; and that those who opposed the repeal of article 370 were in support of homophobia in Kashmir.

This relates to the 2018 Indian Supreme Court ruling, declaring that the application of section 377 of the Indian Penal Code (IPC) to consenting sex betwen homosexual adults was unconstitutional, effectively decriminalizing gay sex. After the Supreme Court ruling on section 377, Kashmir’s “special status,” determined by Article 370, meant that the new precedent on homosexuality did not necessarily apply, and the resulting legal uncertainty became a site of conflict. According to the protestors, the maintenance of Article 370 allows for defacto acceptance of homophobic legislation, by allowing Kashmir to opt out of progressive decisions applying to India at large.

The SOAS protesters believed that those who opposed the repeal of Article 370 were encouraging homophobia, as the Kashmiri Ranbir Penal Code was yet to decriminalize section 377. Protestors distributed leaflets that said “Regressive left please don’t betray us.” This was well after the abrogation of article 370 and it seemed that the protestors were acting deliberately to drown out discussion around the events in Kashmir post August 2019. This was the first occurrence of a practice labelled political “pink-washing” in the context of Kashmir.

In its Brand Israel campaign ten years ago, the state of Israel used the queer community as propaganda to win support for its treatment of the Palestinian people - arguing that where Israel is civilized and progressive and Palestinians are barbaric, homophobic radical Islamists. The aim was to paint Israel as the only queer-friendly country in an otherwise homophobic region. This overlooked the oppression of Israel’s LGBTQ+ community and, according to Jasbir Puar, writing in the Guardian, this amounted to recruiting, “often unwittingly, gays and lesbians of other countries into a collusion with Israeli violence towards Palestine.”

In a political context, pink-washing is the weaponization of the struggles of the queer community to drive a wedge between communities. Political pink-washing is the counter-part to the more commonly recognized corporate variety, whereby brands use Pride flags and gay icons to sell products, often at odds with their treatment of queer employees. It’s clear from the Israeli example, that pink-washing for political gains is not new but, in an eerily similar pattern, it has now arrived in Kashmir.

June is Pride month, but the COVID-19 pandemic has understandably led to this year’s global celebrations being put on hold. Despite this, towards the end of May, a mysterious Instagram account called Pride Kashmir announced plans to hold a Pride March at Lal Chowk in Srinagar. The page is run by an organization called the Kashmiri Youth Movement (KYM) run by Kashmiri Pandits who were born after the 1990 Kashmiri Pandit exodus.

The above post by “Pride Kashmir” was immediately met with suspicion and outrage. It offended the sensibilities of conservative Kashmiri society and suspicions arose around the legitimacy of this group. Internet users pointed out that this organization did not have any grassroot engagement with the LGBTQ+ community in Kashmir and simply stating that a Pride march was to happen during the pandemic made their motives even more suspect. It’s clear that there was never such an event as “Pride Kashmir,” nor was there one really planned. Instead, this was another attempt to inflame tensions between the Hindu and Muslim communities using a false flag campaign.

The movement for LGBTQ+ rights in India saw a decades-long struggle which led to the 2018 decriminalization of section 377 of the Indian Penal Code, applicable to the whole territory of India including Jammu and Kashmir. The Supreme Court of India ruled to decriminalize section 377 as it was found to violate fundamental rights and interfere with the rights of consenting adults. Media reports stating that the law would remain unchanged in Kashmir because of Article 370, which allowed for the state to decide its own laws, exacerbated the issue. This conflict between the ruling on section 377 and the application of Article 370 remained a legal gray area despite the use of precedent and clarification by legal experts. A year later, in August 2019, when the special status of Kashmir was revoked, the legal debate was put to rest, but the role of the queer community as potential wedge between Kashmiri Muslims and Hindus remains an issue, as was clear when the #pridekashmir hashtag began to circulate.

Why does Pink-washing add to Kashmir’s problems ?

Kashmir has always been a widely contested territory. India has had border disputes over Kashmir with both China and Pakistan. With its geographical location and political history there is always considerable debate surrounding the region. Pakistan has invited international intervention on the issue but India has always maintained that it is a bilateral issue.

Kashmir is the only muslim majority state in all of India and its political history allowed for it to retain autonomy under the Indian government with a ‘temporary’ special status under Article 370 which meant that the state could have its own constitution. Laws passed by the Indian government would not be applicable in the state unless the state government concurred with it. In 1954, a presidential order was passed wherein some parts of the Indian Constitution such as fundamental rights, the legislative, executive and judicial organs of the central government and their powers etc. would be applicable to the state.

In August 2019 the Indian government revoked Kashmir’s special status and the state of Jammu and Kashmir was divided into the Union territories of Jammu and Kashmir and Ladakh. When this amendment was made, the whole state went into a communication blackout and there was increased militarization in the region. Right-wing Hindu nationalist groups lauded the move as a victory by India’s ruling party. They called this a long pending “solution” for the problem of Kashmir and stressed that this move would usher in development and prosperity in Kashmir. A Bharatiya Janata Party (BJP) member even said that Kashmiri women and property were now available for the taking.

The greatest criticism for this move was from left wing and liberal activists from India. This is also the same group of people that has actively participated in the cause for LGBTQ+ rights in India. These activists are often taunted by right wing groups as “pseudoliberals” who listen to western narratives and accused of being paid by western masters.

Muhammed Tasim Zahid, a Kashmiri journalist says that, “Kashmiri society is as conservative as any other community in India when it comes to homosexuality. The natural reaction to a Pride march was [...] outrage.” This reaction was then weaponized to show Kashmiris as regressive barbarians, and later provided the opportunity for condemnation of the “liberal left’s” silence about the pride movement. Astroturfing of this movement by right wing fringe groups attempts to build on the narrative of the BJP as a liberator of Kashmir. Under the BJP, the pink-washers claim, “everyone would be free to love.”

Does co-opting pride help the cause of Kashmiri Pandits?

Using a Kashmiri Pandit organization to spread  #pridekashmir adds yet another layer of complexity to the issue. January 2020 marked thirty years since the mass exodus of Kashmiri Pandits or Hindus from the valley. The shootings of eminent Kashmiri Pandits along with threatening slogans on mosque loudspeakers and speeches proclaiming the supremacy of Islam over Hinduism served to escalate tensions between Kashmiri Muslims and Kashmiri Pandits. Kashmiri Pandit families left their homes overnight fearing for their lives, and many were indeed killed. The exact number of deaths and the cost of the destruction from this incident remains unknown, as there has been no formal investigation to date. Today, the Kashmiri Pandits exist as a community outside of their homeland and this makes cultural preservation very challenging. Over the years, there have been calls for justice and a possible return to their homeland but, without much government assistance and with heightened militancy and Islamic radicalism in the valley, this has become near impossible. Right wing groups have often weaponized the pain of the Pandits’ tragic history and used it to justify human rights atrocities in Kashmir. Absorption of this issue into the larger Hindutva narrative has only deepened animosity between the two communities.

The Kashmiri Youth Movement is predominantly engaged in cultural preservation and revival of the ancient sharada script, along with spreading awareness of the history of the Pandit people. By suddenly co-opting pride they have cast a shadow over their cause. They have vocally supported the abrogation of Article 370. We must bear in mind that the Article 35A which allowed for the Jammu and Kashmir state government to decide who its citizens were gave protection to all Kashmiris Hindu and Muslim alike. The abrogation of Article 370 was paired with the repeal of Article 35A as well.

A recent post by the Kashmiri Youth Movement on their Pride Kashmir page for international refugee day comparing the plight of Pandits to those of LGBTQ+ persons has shown a desperate attempt at connecting these two causes.

This also has the potential to damage the legitimate movement of the LGBTQ+ community in Kashmir by giving it a political and religious coloring. The #pridekashmir movement was a false flag, first used to drown out the dissent over the abrogation of article 370 and the manner in which it was carried out. It distracts from human rights issues in the Kashmir valley. Insistence by the Indian government that Kashmir is a bilateral issue and then allowing for western politicians and diplomats to visit the state has shown a need for western validation. The same can be said of attempts to pink-wash the Kashmir issue as well. Pink-washing has made the plight of the queer community in Kashmir a side-show to paint the right as progressive, within India, Kashmir, and on the world stage. We should see it for what it really is: simply another divisive ploy.

On January 3 this year, activist Rachna Dhingra highlighted in a Twitter thread that hundreds of survivors from one of the world’s worst industrial disasters — 1984’s Bhopal gas tragedy — were being targeted and unethically recruited to participate...

The HART Files: Inside the Group Trying to Smuggle Anti-Vaccine Myths into Westminster

Chat records and other documents obtained by Logically show that a U.K. group of lockdown-skeptic political activists and health professionals have been coordinating efforts to lobby MPs and gain...