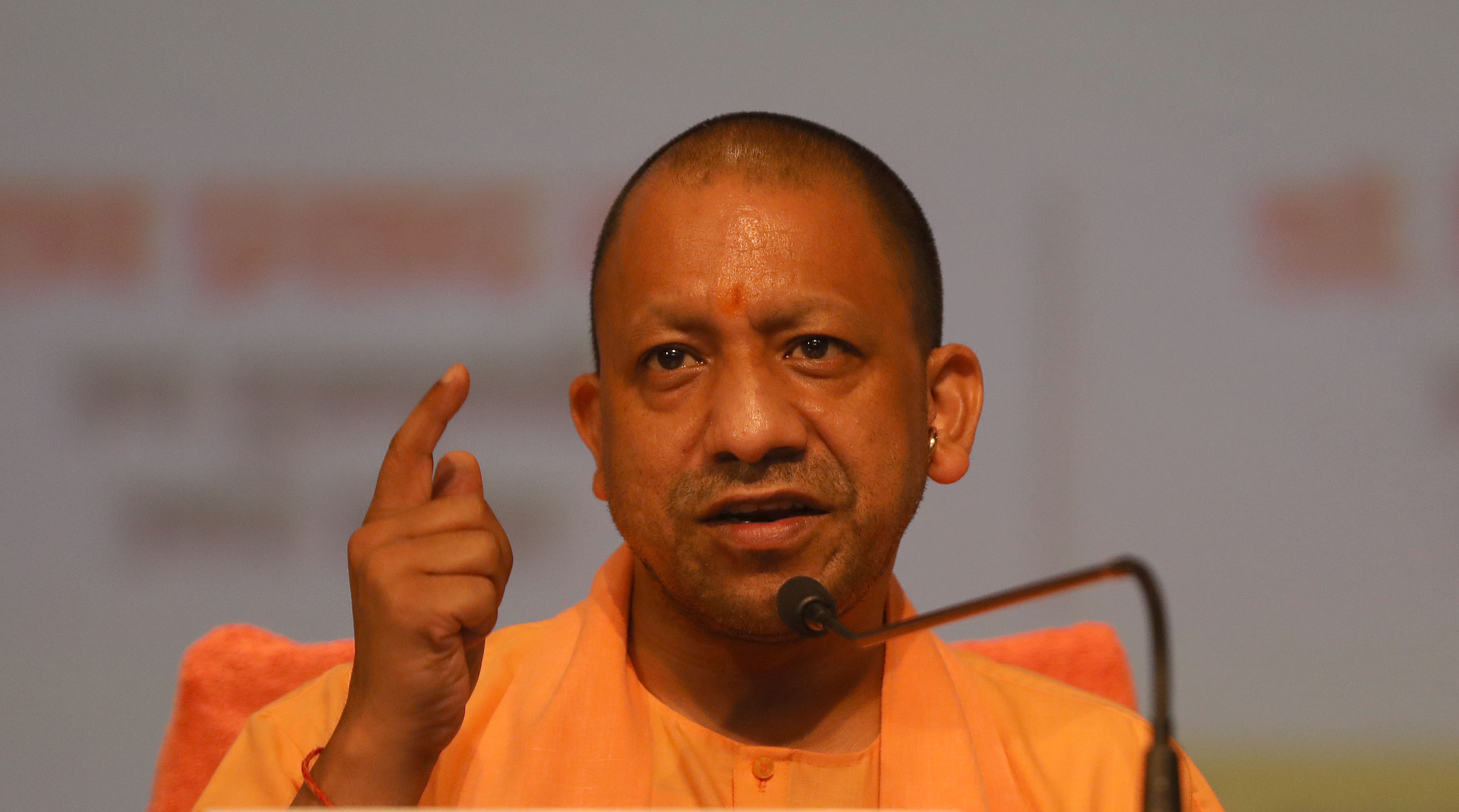 A recently proposed draft bill that aims to control population growth in India’s most populous state, Uttar Pradesh (U.P.), has raised alarm – with critics claiming the bill not only discriminates against women, but also promotes stereotypes against Muslims.

Unveiled earlier this month on World Population Day by Chief Minister Yogi Adityanath, the bill aims to decrease the birth rate to 2.1 per cent over the next 10 years, primarily by instating a two child norm. The bill is based on the notion of a population explosion or too many people and too few resources. "Increasing population is the root of major problems, including inequality, prevailing in society,” Adityanath said. “Population control is the primary condition for the establishment of an advanced society."

Women’s organizations claim the bill violates Article 14 of the constitution, which guarantees equal protection before the law. The draft bill includes incentives for public servants and the general public, ranging from salary increments to free health care facilities, to have fewer children. For instance, under the bill, couples living below the poverty line who have one child can choose to be sterilized, which makes them eligible to receive a sum of eighty thousand (if they have had a boy) and one lakh (if they have had a girl).

Although the draft bill does not specify curbing population growth of any particular religion or community, social media users have used the bill as a basis to attack Muslims. False narratives about Muslims being responsible for the population explosion have spread on Twitter since the announcement. Already a hotbed for violence, Uttar Pradesh has routinely reported the highest number of cases for communal violence, and the new policy has triggered yet another divide along religious lines.

This violence comes despite evidence that religion does not play a vital role in determining family size. In a 2021 report, the Population Foundation of India (PFI) claims that people from varied religious backgrounds want a fertility rate less than the planned 2.1 total fertility; more specifically 1.7 for Hindus and 2.0 for Muslims.

"The concern and alarm around 'population explosion' are not substantiated by national or global data, and there is no evidence that there is a population explosion in either India or Uttar Pradesh,” Poonam Muttreja, PFI Executive Director said in an interview with Outlook magazine.

Proponents of the bill claim that it has no discriminatory elements. “We don't want to give a message in U.P. that we are against any particular religion or anyone's human rights,” said U.P. Law Commission Chairman Justice AN Mittal. Mittal however was responsible for Uttar Pradesh’s enactment of the so-called Love Jihad law, that makes a marriage conducted for the sole purpose of conversion null and void, which came as a response to a popular conservative narrative that Muslim men are luring Hindu women into marriage in order to convert them.

International communities have accused the ruling Bharatiya Janata Party (BJP) regime of using communal rhetoric to instigate violence. Numerous incidents of violence have been reported, such as mob lynching for cow protection (which mostly targets Muslims) and the protests countering the Citizenship Amendment Act (CAA) and the National Register of Citizens, which critics claim will threaten the citizenship of Indian Muslims. Right-wing groups have labeled the Muslim population as anti-nationals, pro-Pakistan and Pakistani hooligans during the CAA protests. Right-wing extremists raised slogans such as “shoot the traitors,'' instigating violence and creating communal disharmony during the CAA protests.

Sanatani Thakur, who has 8531 Twitter followers, posts content that supports the right wing views. She went after the Muslims upon unveiling the Population Control Bill, claiming that they have a hidden agenda of population growth. 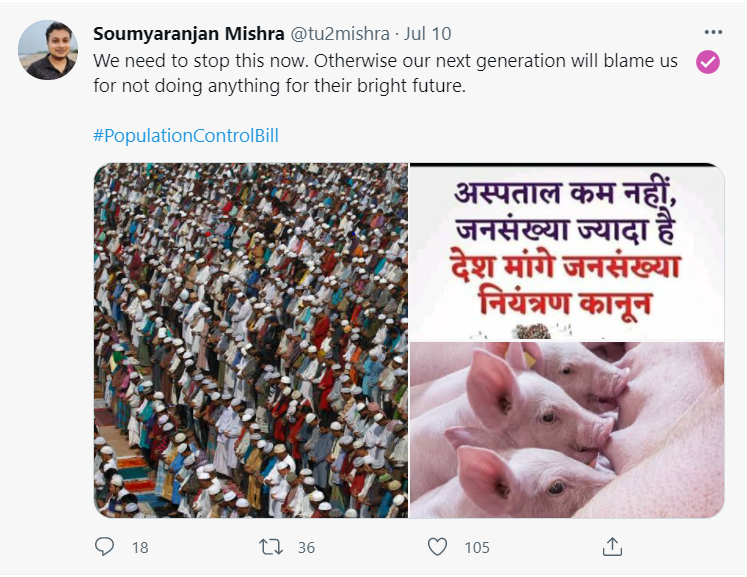 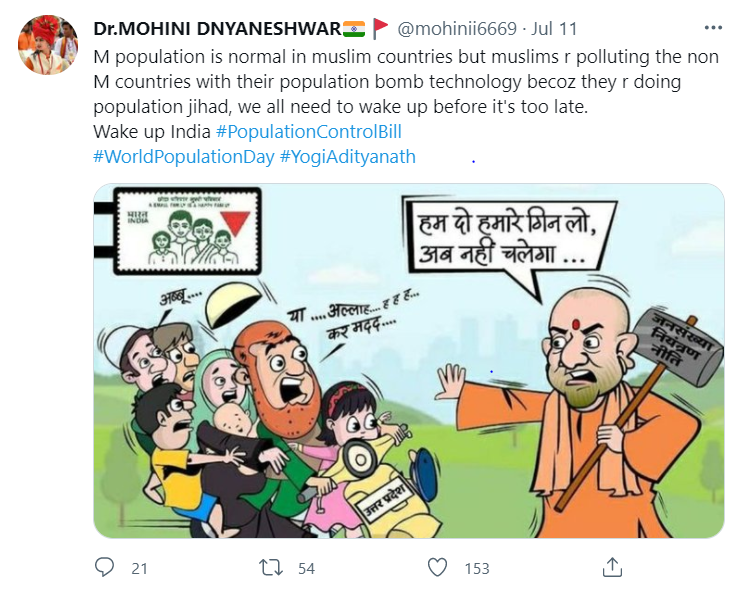 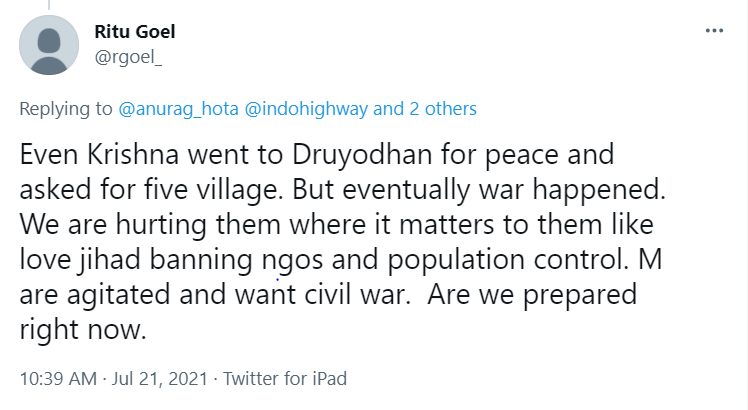 This tweet highlights a scene from the Mahabharata, the Indian epic poem. “Are we ready for a civil war?” the user asks the general public, referring to a war between Muslims and Hindus. 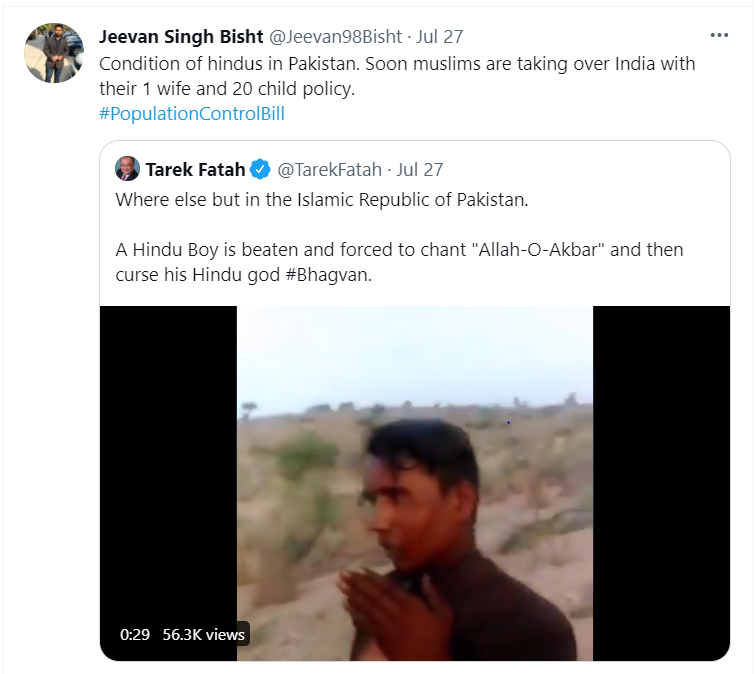 The above tweet, originally posted by Tarek Fatah, a verified profile, has been retweeted 2823 times. 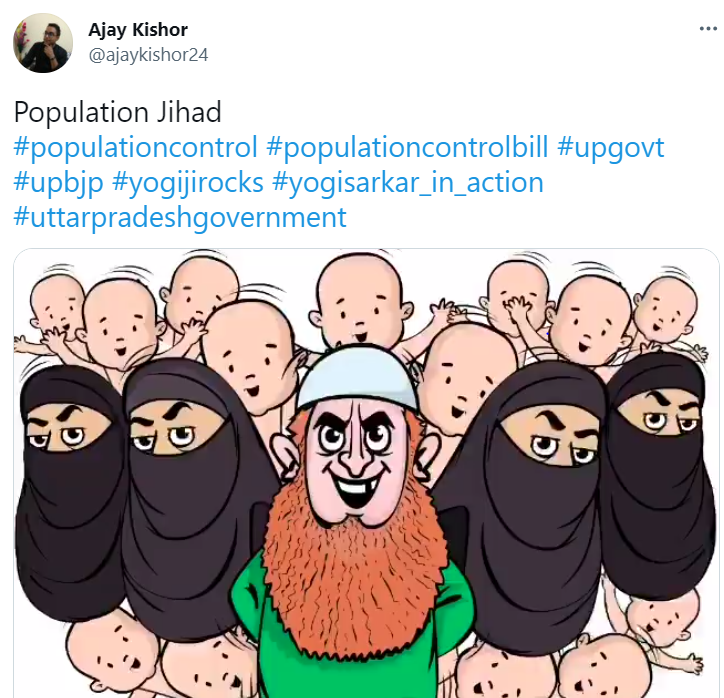 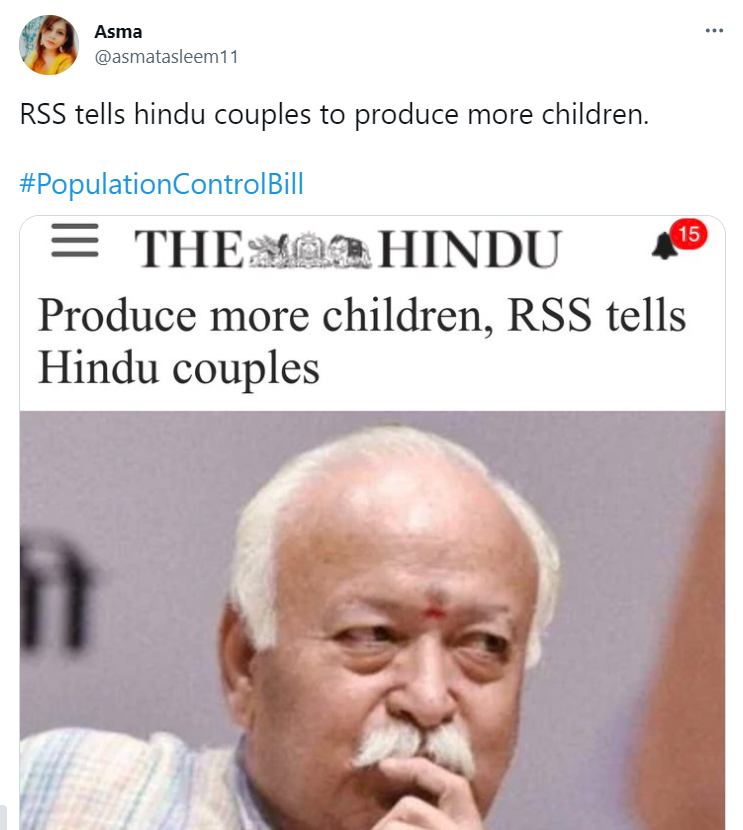 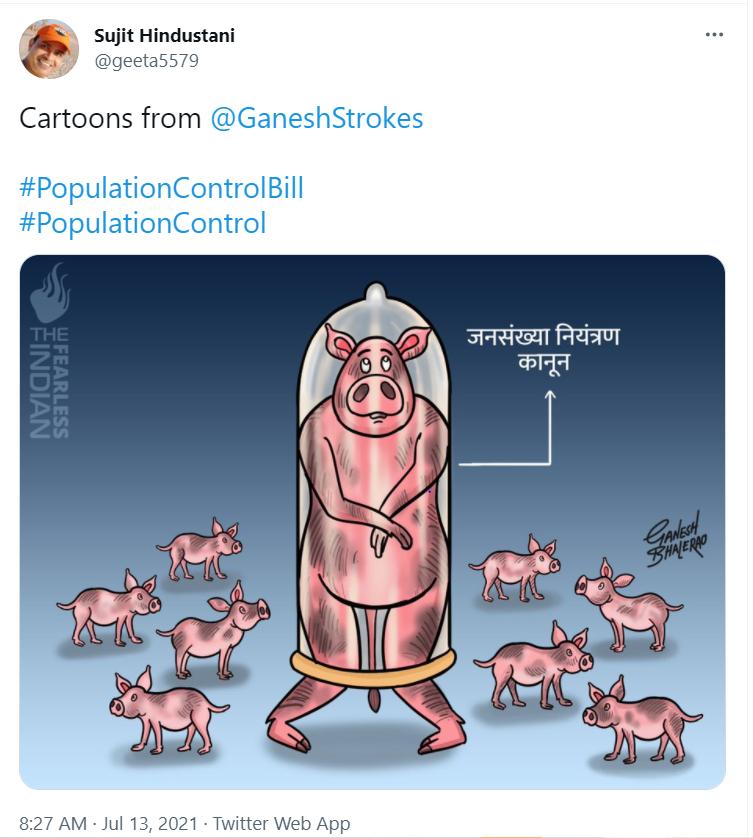 The above cartoon depicts Muslim men as pigs (alluding to pigs being impure according to the Quran) and male contraception as a means of population control. 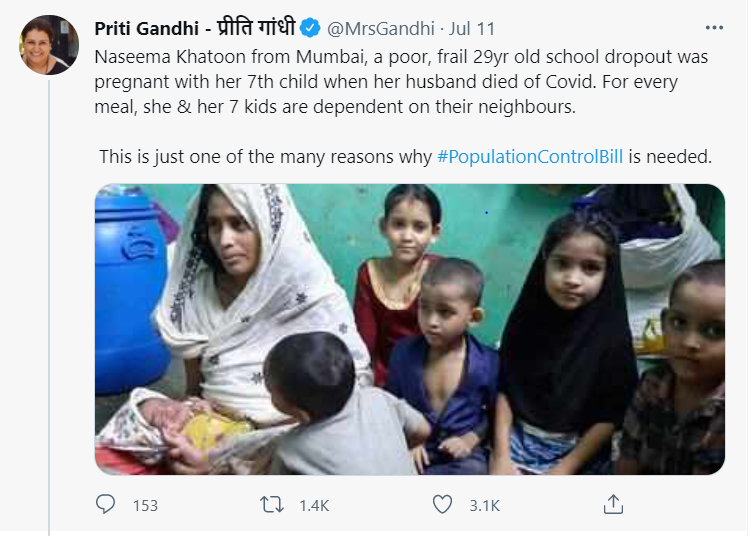 Another such instance is this tweet from BJP member Prithi Gandhi that has been retweeted 1375 times. The post expresses support for the newly announced Population Control Bill, on the basis that it would benefit widowed mothers. However, the decision to choose the story of a Muslim woman fuels the narrative that a specific community is significantly contributing to population growth.

Although population is one of India’s key issues, it is not limited to one community alone and has been a key concern for a very long time. Misinformation has historically followed on its heels. A national family planning programme in 1951 pioneered by the then Census Commissioner R A Gopalsamy which promoted sterilization paved the way for many false narratives. Misinformation (content note: the report linked here contains distressing images and descriptions of sterilization) such as the narratives that vasectomies are linked to disproportionate deaths on the operating table, that they cause men to lose weight, make them easily exhausted and lose their sex drive were common. The successive events during 1976 when nearly six million men were sterilized under Indian Prime Minister Indira Gandhi’s 22 month long Emergency period left a bitter taste.

Indira Gandhi’s son Sanjay Gandhi was handed the reins as millions were coerced into sterilization, while India received $66 million from the World Bank to curb population. Later, in 1994, on adopting the International Conference on Population and Development Programme of Action, the change in India’s stance was clear – the country was unequivocally against coercion in family planning.

The states, on the other hand, have shifted decades later. Adityanath’s new draft bill comes after the BJP-led Assam announced a Population Control Bill with Chief Minister Hemantha Biswa Sarma declaring the policy was in accordance with controlling the Muslim population. But is there evidence that U.P. needed to follow suit?

Uttar Pradesh was one of nine states not providing fertility data to the Indian National Family Health Survey, the country's National Commission. On the contrary, Dr. S.Y. Quraishi the 17th Chief Election Commissioner in his book The Population Myth features a polynomial development design that projected that Muslims wouldn’t ever surpass the Hindu population in India. 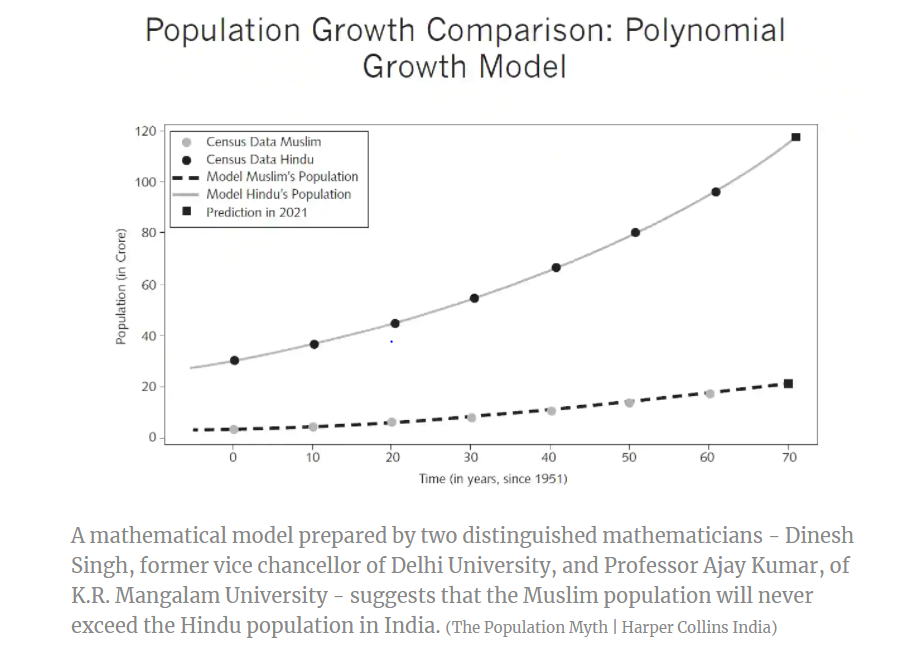 Looking at the worldwide experiences of Germany and China, the carrot and stick approach of incentives/disincentives to encourage or coerce people to have a specific number of children proved to be counterproductive. In particular, China’s issues stem largely from its ageing population, rather than a high birth rate. As a result China ended its one child policy in 2016 and has recently announced that citizens can have three children.These stringent policies can create demographic imbalances too, incentivizing sex selective abortions or female foeticide, and are likely to have disproportionate effects on the most vulnerable and marginalized groups.

More such misinformation and disinformation is likely to spike in the upcoming days from conservative groups targeting Muslims and minority groups. Logically will continue to monitor this issue as the bill makes its way through the legislature.