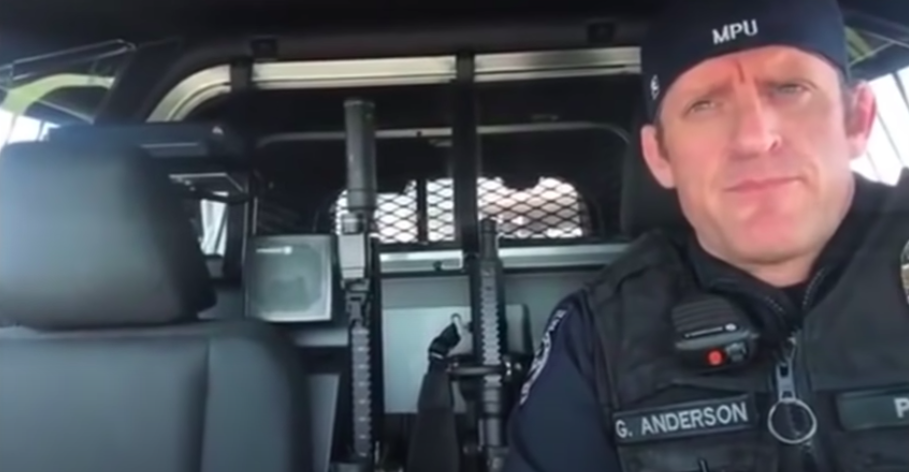 A video currently doing the rounds on social media features Officer Greg Anderson of the Port of Seattle Police’s Marine Patrol Unit giving his take on the enforcement of “tyrannical” measures during the coronavirus lockdown. In the eight-minute video, Anderson expresses his concerns that constitutional rights are being "violated” by both government and officers of the law, citing examples of citizens being ticketed for “going to church, travelling, opening their businesses, or going to the park with their families” before imploring fellow officers to “do what is right.” The video is spreading rapidly, but while many social media users are very quick to call Anderson a patriot, others may be noticing a familiar, more unsettling side to it.

Anderson, a special ops army veteran whose Instagram account features several photos of his children posing with guns (including a toddler with what seems to be an AR pistol), repeatedly compares the current handling of the coronavirus pandemic to “tyranny.” The psychological and economic impact of the lockdown certainly isn’t negligible, but this sort of hyperbole coming from a war veteran and law enforcement officer is inevitably being used to give weight to arguments pushed by America’s fringes. Anderson's video has quickly gained popularity among those promoting fringe conspiracy hashtags such as #QAnon and #WWG1WGA on social media, and there are reasons why his talking points are resonating so strongly with that exact audience.

Reading from the Declaration of Independence to support his point on the violation of first and fourth amendment rights, Anderson compares illegal traffic stops without probable cause to the "Gestapo" and "1930s Nazi Germany." But perhaps most problematic is Anderson’s comments on lockdown measures “widening the gap between public trust and law enforcement” and ultimately "putting his job and his safety at risk." “Look at what’s happened to law enforcement in the last ten years,” Anderson says. “Less and less public trust. And more often than not that is a result of isolated incidents that get blown out of proportion. They’re not isolated anymore. They’re happening every single day.” Though he doesn’t specify what he's referring to here, it’s hard to imagine that Anderson means anything other than incidents that inspired movements such as Black Lives Matter—in which case he seems to be dismissing decades of documented racial injustice and disproportionate numbers of traffic stops experienced by African Americans as merely “isolated incidents blown out of proportion.” Anderson’s comments also downplay law enforcement’s own responsibility for the lack of public trust and imply that such matters are only now cause for concern because of who is feeling the impact. These events were never isolated—they’ve been happening every single day for a long time, just not to the same people.

Anderson also warns that these lockdown measures may “wake up a sleeping giant” leading to “bloodshed in the streets.” “Regardless of where you stand on the coronavirus,” he says, “we don’t have the authority to do those things to people just because a mayor or governor tells you otherwise.” Assuming he means where one stands on how coronavirus is being dealt with and not the seriousness of the virus itself, it should be pointed out that stats have shown that Americans strongly support stay-at-home measures. Towards the end of his video, Anderson asks fellow officers again to “stand up for what’s right,” even if it means risking their jobs. “I need to keep this job more than anyone,” he says. “I have three young children. I have two houses. I have the same sob story that the rest of you guys have.”

Anderson concludes by saying that if “we all stand up together […] it’ll be a non-issue,” which suggests that he believes the lockdown measures are the problem—not the pandemic. According to a Facebook post last month, however, Anderson conceded the seriousness of the virus and the need for social distancing, but firmly opposed any enforcement measures, believing instead that social distancing should be purely voluntary. Even if we give Officer Anderson the benefit of the doubt and say that his video is merely suggesting that Americans don’t need lockdown measures, that people will practice social distancing simply to protect the elderly and vulnerable out of "respect" for them, the examples he cites only show that it is not exactly always the case; and his message, whether he likes it or not, provides ammo to a portion of the population actively looking to defy the shelter-in-place order. Ultimately, by invoking the constitution, Anderson is sending a message to the existing anti-lockdown movement, a group already concerned about "big government tyranny." The message is that sometimes even the people meant to protect the rule of law are on the side of those who want to break it.