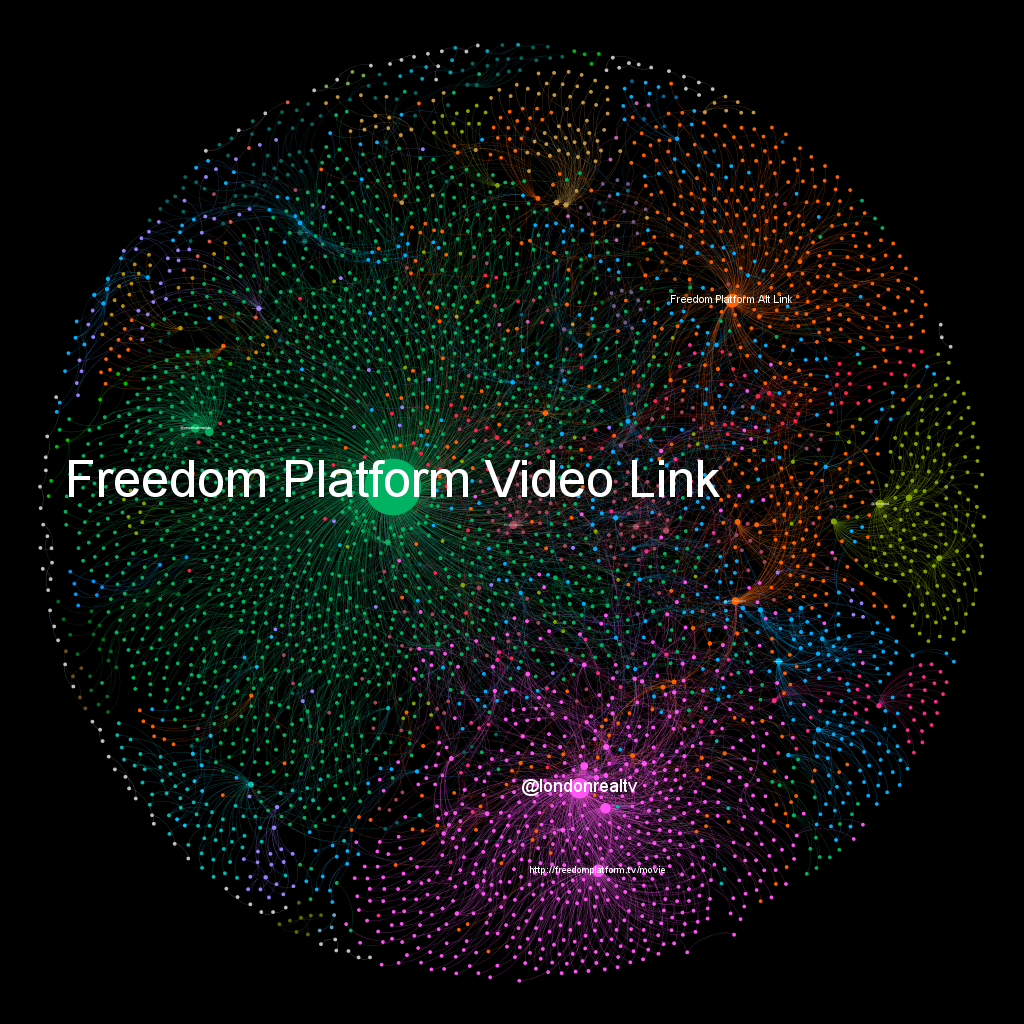 On May 4th 2020, the first Plandemic video appeared on various social media platforms, seemingly from nowhere, and introduced Dr. Judy Mikovits to the world. The 26 minute long video was perfectly designed to tap into doubt and uncertainty around the coronavirus pandemic while many countries were in the middle of lockdown measures. As we have written previously, the video stood out among viral conspiracy content with its slick production and the welcoming, reassuring tone with which it delivered its disinformation.

Mainstream platforms such as Facebook and YouTube were unprepared to deal with the video’s resonance. Views were already in the hundreds of thousands by the time the initial videos were taken down, which at that point was seen as a sign of a coordinated establishment cover-up, leading to re-uploads on less moderated video hosting sites where it still resides today. Plandemic’s influence on trust in public healthcare during the pandemic can’t be overstated - It isn’t a stretch to say that the current anti-mask movement owes much of its energy and popularity to Mikovits’ claims in the video.

Those with a keen eye, however, noticed that the video had a small “part one” under its title. Both keen fans of the first video and the disinformation research community have been waiting for the inevitable sequel.

The first murmurings of Part 2 came from an unexpected source; the Twitter, YouTube, and Facebook page of London Real and Brian Rose. Though Rose is no stranger to Mikovits, having interviewed her twice, his schtick of courting controversial voices such as her and David Icke and knowingly getting videos removed from mainstream platforms in order to cry foul to his supporters had long run out of steam by this month. Rose announced that his website would be streaming the premiere of the 90 minute feature Plandemic: Indoctornation (get it?), not only reinvigorating London Real’s presence in the fringe infospace, but funnelling thousands of emails to Rose’s mailing list for advertising (to view any videos, you need to submit a legitimate email address).

To Rose’s credit, unlike previous livestreams on the Digital Freedom Platform that were embedded 3rd party white label streams, analysis of the source-code on the host page revealed that the Freedom Platform is now hosting its own content. Unfortunately, that content may not have been as explosive as first thought. Plandemic Indoctornation has had a fraction of the first-day impact of its predecessor. Rose’s weekend promotion campaign alerted major platforms to the video and what links to block. Beyond that, as Jane Lytvynenko writes, when compared to Plandemic Pt.1, the video just isn’t very good.

However, the premiere of Plandemic Indoctornation revealed a new tactic in how sources of disinformation foster virality. Speaking directly to the audience, Rose urged viewers to screencap and share the video to as many sites as possible – drawing on the natural memetic and viral spread of the first video. 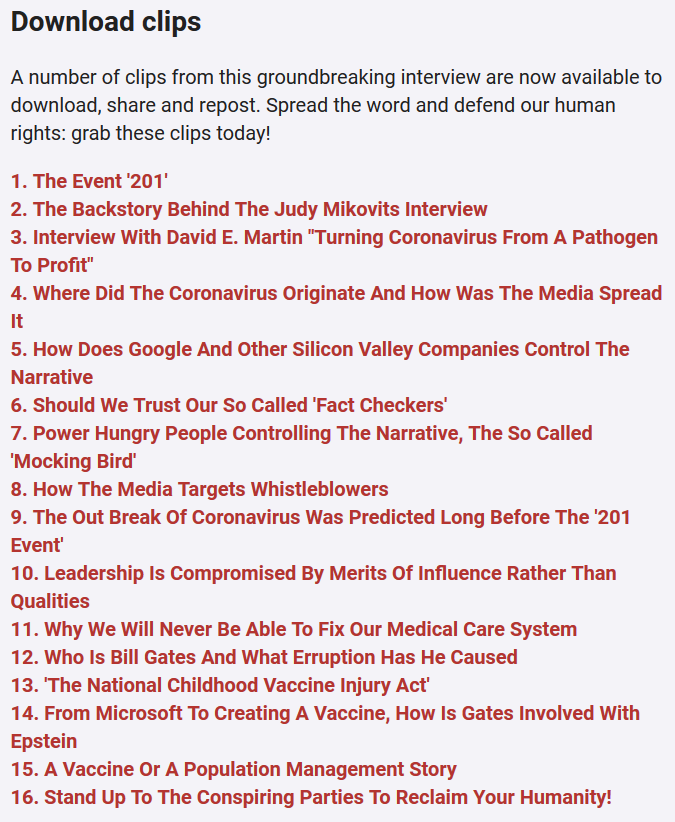 The first Plandemic video, despite only being 26 minutes long, was quickly chopped and edited by fans into quick clips for rapid consumption and uploaded to a wide array of platforms. Plandemic 2 has learned from the organic spread of its predecessor, and has come pre-chopped into easily uploadable and consumable clips. Once the live premier of Plandemic 2 had concluded, a host of links to download short clips from the film appeared in the video description. This engineered “swarm” technique for viral spread may prove to be an effective way to dodge censors. Each clip will have its own self-contained argument and agenda while also leading back to the full film.

Every clip has the potential to become its own piece of memetic content, evolving and developing its own paratextual content, hashtags, and keywords. This transforms Plandemic Indoctornation from a single feature-length disinformation film into a disinformation clip shotgun, with high spreadability and the potential to bombard major social media platforms with a raft of related-but-different content to overwhelm moderators or filters.

It is still early days to see whether Rose’s call to arms and adoption of this technique is successful. Most spread for the video so far is due to a direct link to the Freedom Platform, or a number of mirror sites hosting the full film. If successful, the ready-edited bite-sized clips may set a worrying new precedent for co-ordinated disinformation videos. However, given Plandemic Indoctornation’s less-than-stellar impact so far, the memetic campaign may already be faltering. This may be because of information exhaustion around coronavirus, successful anti-disinformation campaigns, or simply the conspiracy community recognising a poor sequel. 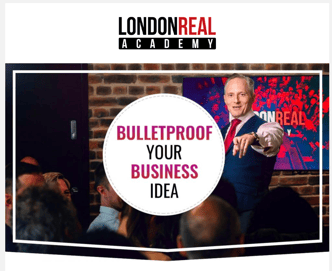 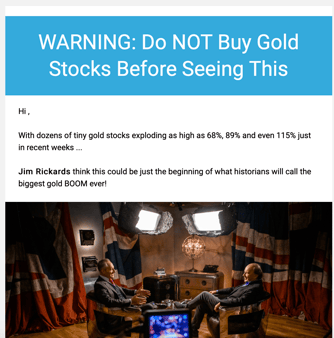 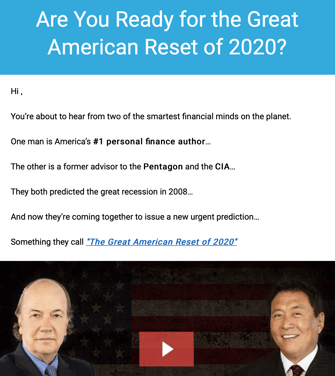 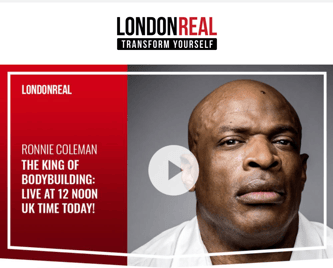 The Haunting of r/wallstreetbets

In January 2021, members of the /r/wallstreetbets subreddit made the stock price of GameStop ($GME) soar. As the saga drew international attention, media outlets tried to explain why an online community was now in an open conflict with Wall Street...