Down the Rabbit Food Hole: Pete Evans and the Danger of "Wellness" 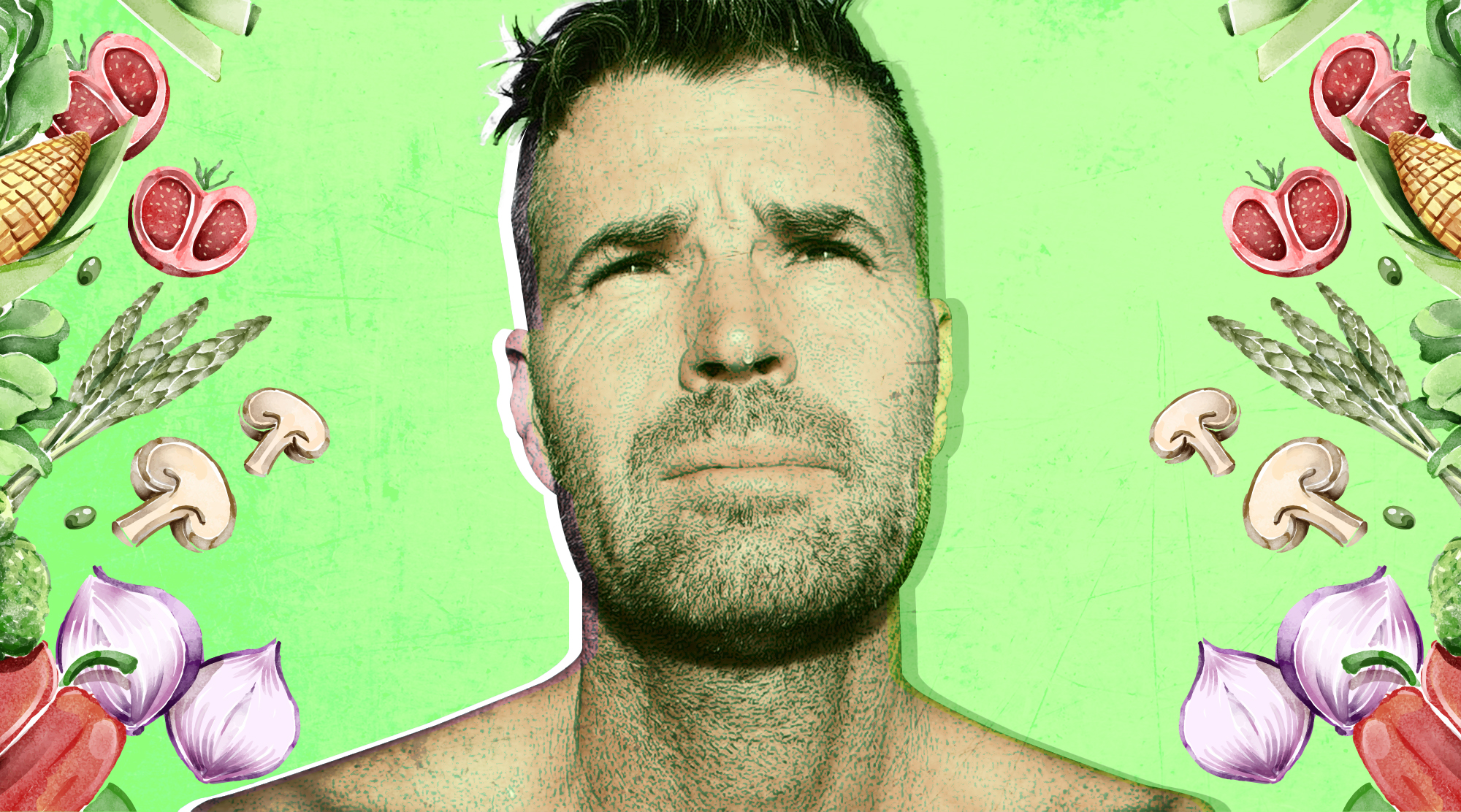 Outside of Australia, you would be forgiven for not knowing who on earth Pete Evans is. From the dizzying heights of judging My Kitchen Rules, a competitive cooking game show broadcast for 11 seasons in Australia, Evans (previously a popular Sydney restaurateur) became a regular celebrity chef, with a variety of monthly recipe columns in Australian magazines and a series of cookbooks for sale in major retailers. Somewhere along the way, Evans discovered the paleo diet and began making his opinions known on all kinds of nutritional issues, fluoride in tap water, treating coronavirus with "energies" and ultimately flirting with QAnon conspiracy theories and posting neo-Nazi symbolism on Facebook.

From wellness to "well, actually you might want to read about the real history of Germany," Pete Evans’ journey from primetime celebrity chef to full-blown conspiracy theorist is a perfect illustration of wellness culture’s distressingly common pathway towards dangerous engagement with fascist ideas. The route from engaging with health and wellness communities to promoting dangerous conspiracy theories is not inevitable, but nor is it uncommon.

Since posting a cartoon featuring the Black Sun or Sonnenrad (sun wheel) symbol, commonly used by white supremacist groups and in Nazi Germany, Evans has lost his affiliation with the publisher Pan Macmillan, and several major retailers have chosen to stop stocking his books (Kmart, Target, Big W and Dymocks, among others).

“To all the amazing fb community we have built over the years ... yes the 1.5 million of you,” Evans wrote before deactivating his Facebook page after facing enormous backlash. “For me, it is time to say goodbye to this platform and thank you all for sharing your stories of beautiful health transformations and for giving me a bloody good laugh and cry along the way.”

He returned to Facebook barely two days later to post an anti-mask meme, with Leonardo DiCaprio offering cheers to “My freedom loving, no mask wearing, vaccine rejecting, free thinking friends.” Evans has also announced his movement over to Parler, a social media platform preferred by many conservatives for its lax-to-non-existent moderation. These days, Evans is posting on his Facebook page as much as ever, particularly criticism of efforts to develop a vaccine against COVID-19.

The dangers of all this, though, go well beyond one man falling down the conspiracy rabbit hole and losing sponsorships.  Evans still holds a massive social media following and a high public profile, along with a mountain of support from fellow conspiracy theorist communities. Despite ultimately losing his television role and publishing contracts, Evans maintains a platform to promote his views. This is likely not the end of the Pete Evans story, but this is how we got here.

The First Step: Activating the Almonds

Outside of his television celebrity, Evans first really jettisoned himself into wider cultural relevance (and mockery) in 2012 with a small “My Day on a Plate” column in Sunday Life in Australia’s Herald Sun newspaper. In the food diary that dominated social media discourse for the day and made “activated almonds” Australia’s punchline of the week, Evans detailed his diet of alkalized water, cacao nibs, activated almonds, sprouted millet, and not a whole lot else.

Evans and his almonds became a running joke in Australian culture, but as little more than a harmless health nut with some strange ideas about superfoods and whether eating should be enjoyable.

Fast forward to 2014 and yes, he’s a fluoride guy. Evans travelled to meet with a group called “Fluoride Free WA”, a Perth lobby group pushing to remove fluoridation from drinking water. He has continued with this advocacy, posting in 2019 on his Facebook page that fluoride is a “major contributor for thyroid, brain and degenerative diseases. Please be aware that this has nothing to do with your teeth, it is a neurotoxin and It is a forced medication.” He then encouraged his followers to visit a paleo diet website for answers to their health issues.

In a Facebook Q&A in 2016, Evans told his million-plus followers that sunscreen is full of poisonous chemicals, saying that “We need to respect the sun but not hide from it either as it is so beneficial for us, but use common sense. The goal is always never to burn yourself." In 2018, Evans went on to post an image of himself on Instagram just staring directly at the sun for some reason, supposedly following a spiritual practice known as “sungazing”.

Everyday I love to immerse myself in an experience within the cleansing ocean water as well as a brief gaze into the radiant light of the early rising or late setting Sun. These simple, yet powerful practices have got to be two of the best forms of free medicine on the planet for body, mind and spirit. #sungazing

Putting Your Baby on a Paleo Diet

Here’s where things stop being funny. Evans’ first major period of embattlement came in 2015 with his involvement in a cookbook called Bubba Yum Yum: The Paleo Way for New Mums, Babies and Toddlers. The co-authored paleo cookbook featured a recipe from blogger Charlotte Carr for something called “Baby Building Broth”, recommending that infants under six months be fed a bone broth made from chicken feet, chicken bones and apple cider vinegar. As was pointed out by numerous health experts, the recipe would include dangerously high levels of vitamin A, which is toxic in high doses and quite potentially fatal to babies. Yes, fatal.

Evans faced huge backlash from the public and the Federal Health Department, and the book was scrapped by publisher Pan Macmillan but subsequently published online by Evans and his co-writers, with a rebranded “Happy Tummy Brew” that was no longer recommended as an infant’s primary source of nutrition and moved to the 6-12 Months section of the cookbook.

In 2017, Evans produced and narrated The Magic Pill, a Netflix film promoting the high-fat, low-carb ketogenic diet as, essentially, a magic pill for all manner of minor and more serious health problems.

The Magic Pill, removed from Netflix after an end of contract in July this year, exemplifies what is often the problem with wellness culture and why it tends to correlate with belief in wider conspiracy theories. It introduces several “truths” in an authoritative way—studies on the efficacy of the ketogenic diet as a treatment for epilepsy, for instance—and throws them in the ring with all kinds of unsubstantiated claims about the diet treating everything from autism to cancer. Much of this is supported only by anecdotal evidence.

The difficulty with all this, of course, is that not all the claims made in something like Evan’s Magic Pill documentary are completely divorced from reality. There is an abundance of evidence to support the importance of good fats in our diet, as well as things like reducing sugar and processed carbohydrate intake. The issue with something like The Magic Pill is it takes advice supported by peer-reviewed studies and accepted by the wider nutritional community, and intersperses them with anecdotal and unexamined claims about the “healing power” of food and the rejection of scientific consensus. Without the time and resources for the average person to conduct, say, intensive academic research into these claims, it is easy – and perhaps this is calculated – to be unsure in a 90 minute film when fact becomes unconfirmed theory. And with a massive audience like Evans has, this is incredibly dangerous.

Treating the Coronavirus With Energies and $15,000

Earlier this year, Evans was slapped with a $25,000 AUD fine by Australia’s Therapeutic Goods Administration over unsubstantiated claims he made over a product he promoted called the BioCharger. The BioCharger is described on Evans’ website as “A hybrid subtle energy revitalisation platform… The BioCharger NG is completely non-invasive, and has proven to restore strength, stamina, coordination and mental clarity.” In an Instagram live video, Evans claimed that the device could be used in relation to the “Wuhan coronavirus”.

None of these claims is accompanied by supporting studies or evidence of the product’s efficiency, although its website features a testimony from Tim Brown, a chiropractor and “Co-Medical Director for World Surf League”. Brown claims to have “experienced great synergy between the BioCharger and my work. The reason is simple...It doesn't treat disease, instead it enhances the body's innate ability to heal with its subtle resonating energy field using evidence based scientific principles. It's fascinating stuff and I've seen it do some incredible things for the elite athletes I work with.”

The BioCharger website features a link to "The Science of BC NG". That link is broken.

His website, still promoting the BioCharger at a special discounted rate of just $14,490 USD for Pete Evans followers, now features the disclaimer “The BioCharger NG is not a medical device, is not intended for use in the diagnosis of disease or other conditions, or in the cure, mitigation, treatment, or prevention of disease, in man or other animals.”

2020 also sent Evans further over the conspiracy cliff, flooding his Instagram and Facebook pages with everything from anti-vaccine content, posts encouraging his followers to ignore advice around wearing masks to combat coronavirus, to Evans himself wearing MAGA hats and sharing cryptic content related to QAnon conspiracy theories.

All of this brings us to the perhaps natural conclusion of a building crescendo of doubt directed at nutritionists, scientists, the government, and our inherent instinct to avoid staring directly at a damaging light source. Evans posted a cartoon on his social media featuring neo-Nazi imagery, with a caterpillar in a MAGA hat telling a butterfly coded with the white supremacist Black Sun image “You’ve changed”. The butterfly says “We’re supposed to”. Many commenters pointed out that the symbol was associated with Nazi Germany, but not to worry—Evans responded to a commenter encouraging them to “have another look about the true history of Nazi Germany.”

“Sincere apologies to anyone who misinterpreted a previous post of a caterpillar and a butterfly having a chat over a drink and perceived that I was promoting hatred. I look forward to studying all of the symbols that have ever existed and research them thoroughly before posting,” Evans later posted after the public backlash.

Evans lost publishers and retailers, but only with flagrant white supremacy as the seemingly final straw. Throughout all of this, Australian TV’s Channel 7 had continued to renew his hefty My Kitchen Rules contract, only ending it earlier this year citing falling ratings. In June, Channel 9’s 60 Minutes aired a full-length interview on national television with Evans where he railed against social distancing measures, linked Bill Gates to the coronavirus, and aired concerns for his safety. “If I disappear in a weird freakin’ accident, it wasn’t an accident, OK?,” he says.

The Australian media landscape, which has frequently faced criticism for lending a platform to racism and other harmful ideas, has a lot to answer for. And for now, Evans’s profile remains on social media with his 1.5 million following intact, and a fanbase empowered by the idea that pulling funding and canceling contracts is censorship. In fact, Pete Evans hasn’t disappeared at all, and that certainly isn’t an accident.

There is a common misconception that until recently, people thought the world was flat. This is not the case. The Greek mathematician Pythagoras considered the idea of a round earth in 500 BCE, and Plato described the Earth as the center of a series...