Panics About Contaminated Food Aren’t New, but Why Have Cops Joined In? 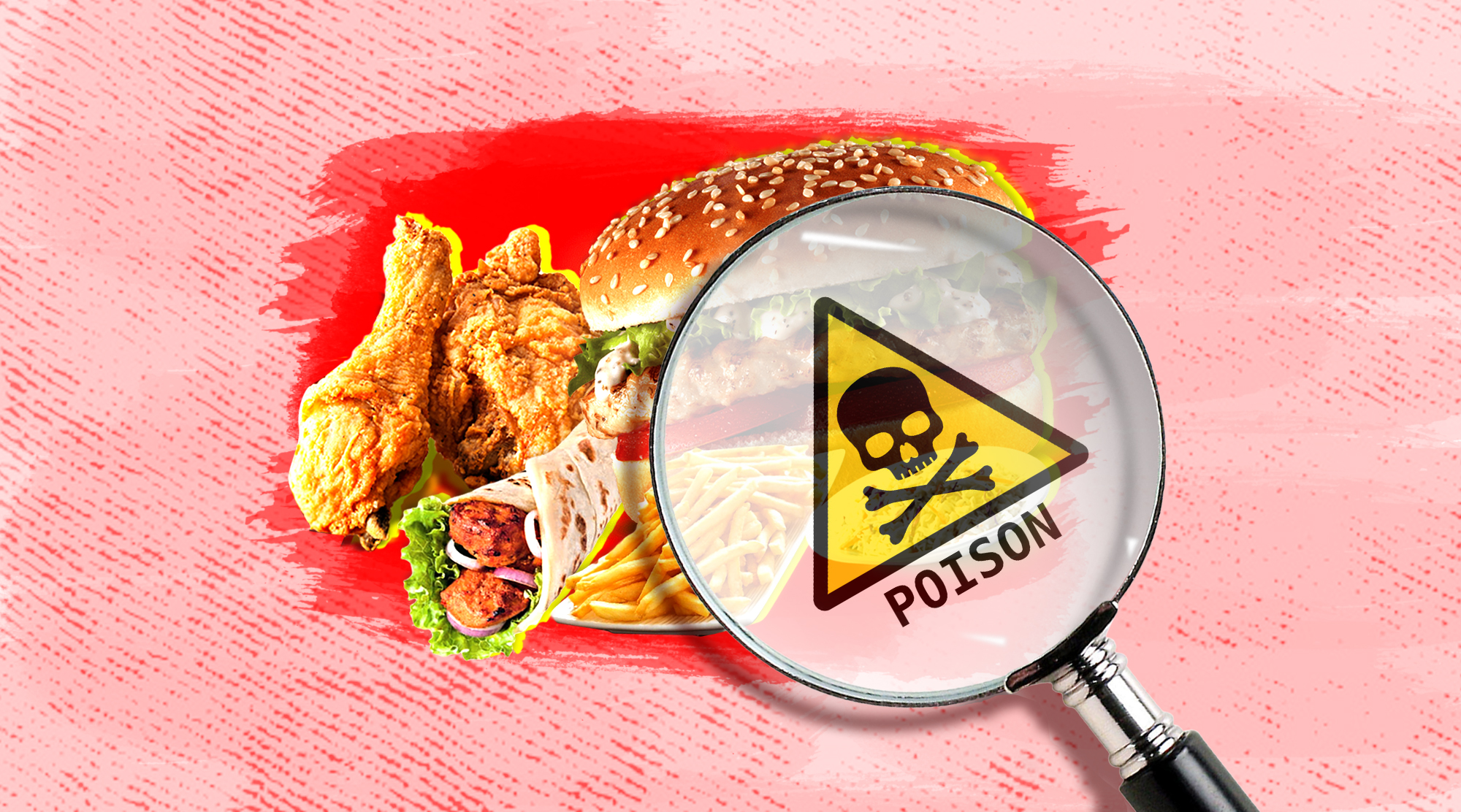 In 2005, a woman named Anna Ayala was dining in a Wendy’s in San Jose, when she claimed to have found a finger in her chilli. The resulting hysteria caused the restaurant chain to lose an estimated $21 million in business. The finger was taken away for testing by the Santa Clara County coroner’s office, where officials concluded that the digit “was not consistent with an object that had been cooked in chilli at 170 degrees for three hours," as it would have been if it had been cooked and served in the dish. Ayala and her husband Jamie Placencia eventually confessed to planting the finger in order to sue the chain for a hefty sum, and were subsequently sentenced to 21 years in prison between them, for their part in the fraud. The finger turned out to have belonged to a colleague of Placencia’s, who had lost it in an industrial accident. Ayala later admitted to having cooked the finger at home, in an effort to fool the authorities.

While the hoax didn’t come off for Ayala and Placencia, it’s easy to see why they thought it might have been the gateway to a windfall, and just as easy to trace where the idea came from. American folklore is littered with urban legends about grisly or alarming food-based discoveries, from razor blades in apples and poisoned Halloween candy to a breaded, fried rat supposedly served at a KFC in California. In 2020, the classic American food scare story has added another character to its cast: the figure of the hard-done-by cop, unfairly made the target of food based harassment by SJW service workers, riled by the Black Lives Matter movement to the point of deliberately poisoning an officer’s milkshake or hiding a tampon in his Frappuccino. The cultural obsession with horrific instances of unwitting consumption is older than the poisoned Halloween candy myth though: some reports suggest that the Roman Emperor Claudius was killed by poisoned mushrooms. In the Shakespeare play Titus Andronicus, Tamora, Queen of the Goths is tricked into eating a pie containing the remains of her two sons as part of an elaborate revenge plot. In Medieval Europe, there are accounts of Jews burned at the stake as retaliation for rumoured well poisonings, which their persecutors assumed to be the cause of the Black Death.

Accounts of the poisoning obsession in ancient times point to a paranoia around assassination: that a specific person might be targeted with a specific poison, as part of a plot to remove them from power. The Ancient Greek King Mithridates VI was obsessed with discovering antidotes to different poisons in order to pre-emptively foil a possible assassination attempt. The modern poisoning myths are more diffuse: they focus heavily on accidental or deliberate contamination of food that has a wider distribution circle than just one person. The updated poisoning myths are more focused on the potential sadism of those around us than on the possibility of specific targets. In this sense, the panic has spread outwards to the general population, you don’t have to be a King or an Emperor to be scared of being poisoned, it could happen (the stories suggest) to anyone.

The sociologist Joel Best has written extensively about urban legends surrounding poisoned Halloween candy, which he and other sociologists term “Halloween sadism.” Though many such stories exist, on closer inspection, the cultural fear of children being poisoned while out trick or treating is closer to an unfounded moral panic than a genuine threat. A surge in reported incidents in the news (10 in 1970 and 14 in 1971) left the possibility present in the minds of many Americans throughout the 1970s. Best identifies some examples of deaths that were popularly attributed to Halloween poisoning, but which were in fact totally unrelated. In 1978, two-year-old Patrick Wiederhold died in Flint, Michigan after eating Halloween candy. Tests failed to find any evidence of poisoning, however, and the official conclusion was that Patrick died of natural causes. In 1990, seven-year-old Ariel Katz collapsed while trick-or-treating in Santa Monica, California, and later died. Press reports of the incident ignored Ariel’s history of heart problems and focused on the Halloween connection, while the coroner ultimately recorded Ariel’s death as resulting from an enlarged heart.

Particularly disturbing is the story of Timothy O’Bryan, an eight-year-old from Pasadena, Texas. Timothy died in 1974 after eating Halloween candy that had been laced with cyanide, and the subsequent investigation uncovered that Timothy’s father Ronald was responsible for the poisoning. Ronald O’Bryan had taken out an insurance policy on his son, and distributed poisoned candy to his daughter and three other children to deflect attention away from his actions. Clearly O’Bryan’s crime was a copy-cat one; the hysteria around Halloween poisonings over the preceding years seems to have convinced O’Bryan that the circumstances would be plausible enough for the insurance company to pay out against the policy, and thus solve his money troubles. In this way, the sad case of Timothy O’Bryan has echoes of the finger in the Wendy’s chilli, another example of a perpetrator being inspired by existing myths, and hoping to leverage them to their advantage.

As the traditional American economic model of the 20th century declined, the country shifted towards a service economy. Until the pandemic hit, most of the US workforce fell into the service sector (around 107.8 million people as of 2019), but service workers have traditionally been low paid, often immigrant workers, and broadly less likely to join unions than those in other sectors. This has contributed to an impression of service workers as a combination of aggrieved and incompetent, in other words, exactly the kind of people who might – accidentally or otherwise – deposit a toxic substance or piece of human flesh into your meal. In this way, the threat of food contamination in American popular culture hasn’t gone away, but shifted from one that runs parallel to the stranger danger panics of the late 20th century, to one built for modern America, its disenfranchised food service workers and its litigious society hungry for payouts. These scares happen when people feel alienated from each other, whether it’s a King trying to cling to power, scared citizens surrounding Jewish ghettos during the Black Death, or modern-day Americans who interact every single day with service workers whose labour they depend on but to whose lives they cannot begin to relate.

Fast forward to the chaotic ghost-train ride that is 2020, with not only a pandemic to heighten existing cultural tensions, but furious protests in many major cities, going on for weeks now. American society has perhaps never been so divided, along cultural, racial and economic fault lines. The problem of social alienation is on the rise once again. It’s no surprise then that the overactive American imagination has been quick to update the urban legend to meet the requirements of the cultural moment, with a new victim: the police. In June of this year, a news story about three NYPD officers allegedly becoming victims of a poisoning incident at a branch of Shake Shack went viral. NYC’s largest police union, the Police Benevolent Association of the City of New York, alleged that the three officers had been hospitalized as a result of a toxic substance thought to be bleach having been added to their drinks. Further investigation found that the officers had experienced no symptoms or ill effects of the “poisoning” whatsoever, in fact they had simply reported an odd taste in their shakes, but the Shake Shack was quickly designated a crime scene and a full investigation carried out. It was concluded that the substance in the shakes was cleaning fluid from the machine used to prepare the drinks, which had been insufficiently flushed before use.

A week later, across the country in LA, an officer was drinking a Frappuccino in a branch of Starbucks, when he found an item in his drink that he believed to be a tampon. Once again, the local police union was quick to ramp up the tension, with the LA Police Protective League commenting: “This disgusting assault on a police officer was carried out by someone with hatred in their heart and who lacks human decency. We hope they are publicly exposed, fired, arrested, and prosecuted for their cowardly and repugnant actions." The item was eventually determined to be a cleaning cloth, accidentally blended into the drink. The same week, another officer went viral after posting a tearful video, after a delay in her McDonald’s order had caused her to become suspicious. The officer insinuated that she suspected employees would tamper with her food because of her job, saying “Right now, I'm too nervous to take a meal from McDonald's because I can't see it being made." Once again there was no evidence whatsoever of any tampering having taken place.

This new development in the history of food scares takes elements from both its forerunners, the panics around Halloween candy and around service workers contaminating food. In the first instance, it aims to make the police officers involved appear vulnerable, innocent and defenceless like costumed children on doorsteps with baskets raised for treats. It assumes, too, that service workers’ main animating instinct is grievance with their lot, and that rather than simply wanting better pay and working conditions, they are bent on recrimination.

Breaking bread with others is a sign of trust, and of kinship. After all, Thanksgiving, one of the foundational stories of modern America, is based on the pilgrims sharing food with Native Americans. The reality of course is different, outward symbols of good faith gave way to deception and genocide on the part of the settlers, there’s even some evidence that they gave Native Americans blankets contaminated with smallpox; biological warfare disguised as a gift. The truth is, that like all good scare stories, food based panics depend on elements of truth to lend them credibility. Food scares aren’t going away anytime soon; as long as there are rifts in American society that prevent people from trusting and understanding one another, and a steady stream of milkshakes to be eyed with suspicion.

Machines aren't born biased, they are taught it.

NB: This article's header image is by Stephen Lilley from Flickr