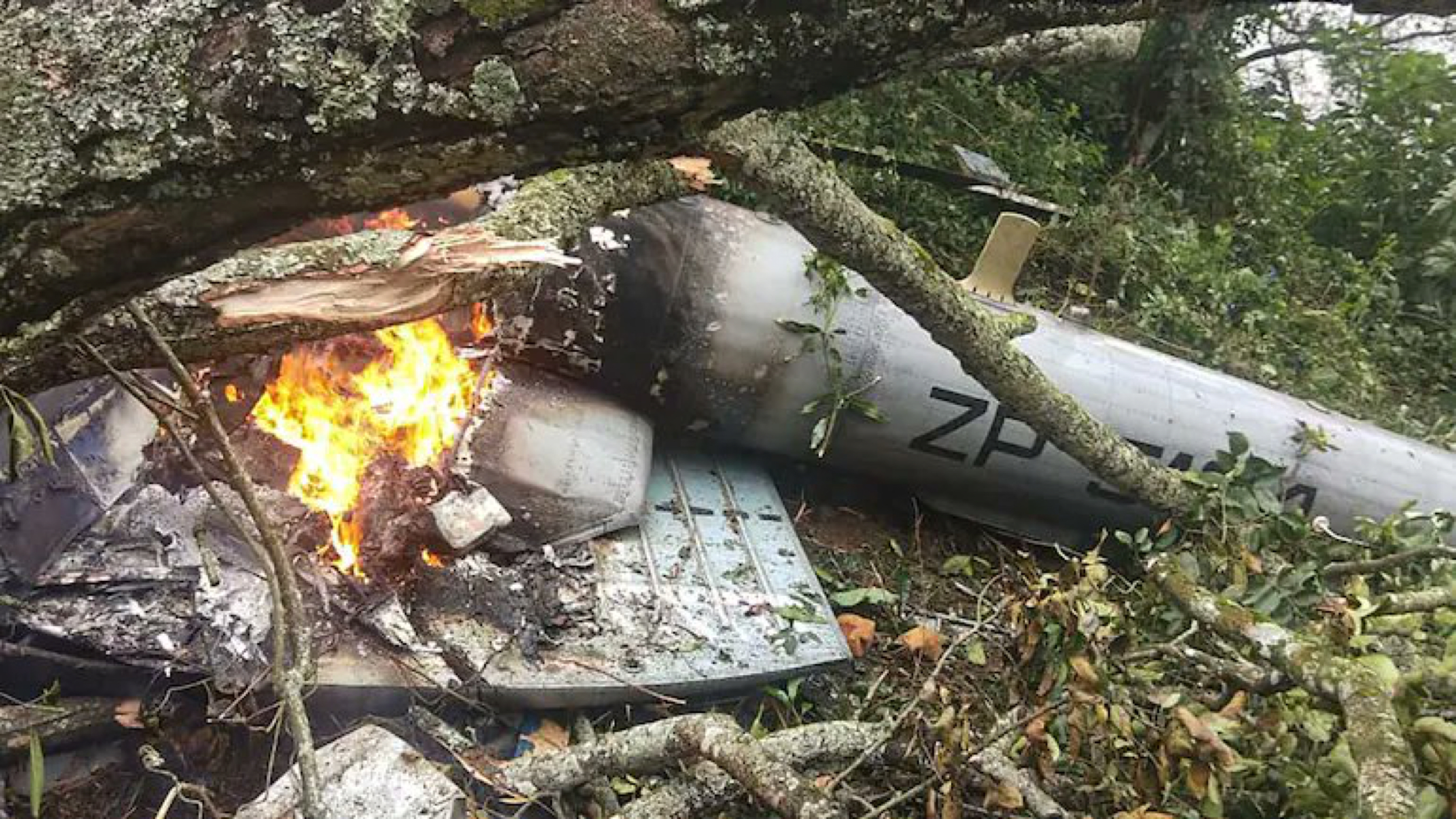 
The helicopter crash on December 8, 2021 that killed Chief of Defence Staff General Bipin Rawat, his wife, and 12 other military personnel near Coonoor, Tamil Nadu, shocked the nation.  Within hours of the crash confirmation by official sources, conspiracy theories and narratives started gaining traction online, claiming that this crash was not an accident and that there was a plot to kill India’s top-ranking military official.

On December 9, Defence Minister Rajnath Singh announced that a tri-service enquiry had been ordered by the Indian Air Force (IAF) to investigate the cause of the helicopter crash.The Indian Air Force on its Twitter handle stated that it would be investigating the accident and requested the public avoid speculating about the incident.

Logically’s investigation shows that several Twitter accounts apparently from Pakistan have amplified versions of these conspiracy theories. Among the most popular are claims that the chopper was shot down by “Tamil Rebels,” a term used to refer to the Liberation Tigers of Tamil Eelam or the LTTE, an insurgent group from Sri Lanka that has been inactive since its defeat in 2009 by the Sri Lankan army. The narrative has been driven primarily by Pakistan-based accounts, apparently to take advantage of the existence of pro-Tamil Eelam sympathisers in the state of Tamil Nadu. 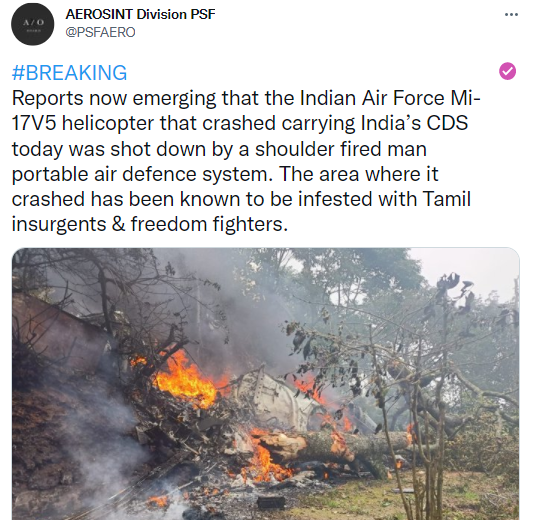 One account with the handle @PSFAERO posted a thread starting with the above tweet, after which the narrative was quickly reiterated by other Pakistani accounts.

Among these were the Pakistan Strategic Forum, a blog that claims to be a think tank, stating the chopper crash was caused by Tamil rebels. The post was later removed, and a case was filed against this Twitter handle by The Tamil Nadu Crime Branch Central Investigation Department. The self-proclaimed think-tank has even put out a 7 minute video on December 14, with yet another conspiracy theory that this crash was a result of an inside job.

Hamza Azhar Salam, founder and editor of The Pakistan Daily, claimed that Tamil rebels were responsible for the helicopter crash. He also alleged that the administration of Indian Prime Minister Narendra Modi could have orchestrated it. Both conspiracy theories, one being an inside job and the other being about the crash. 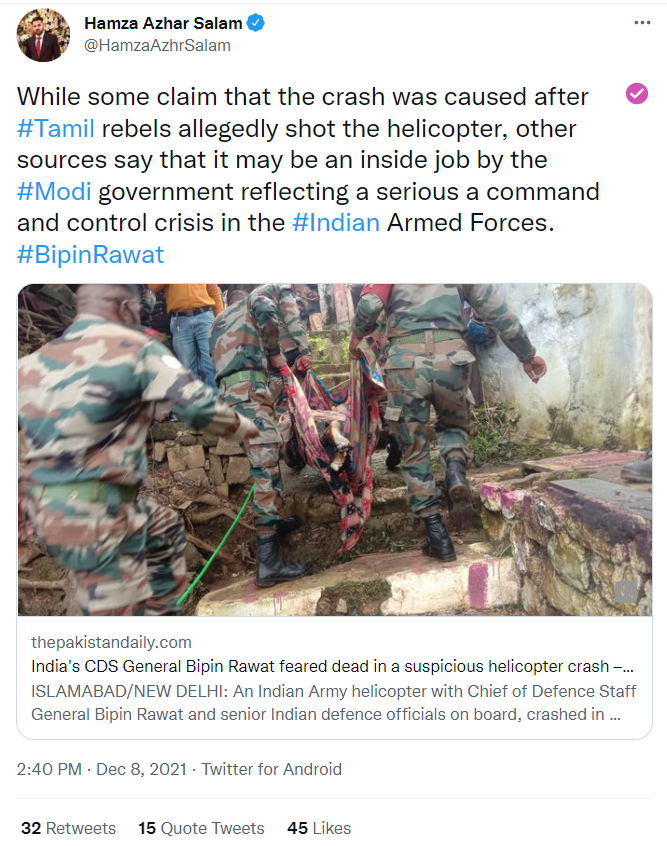 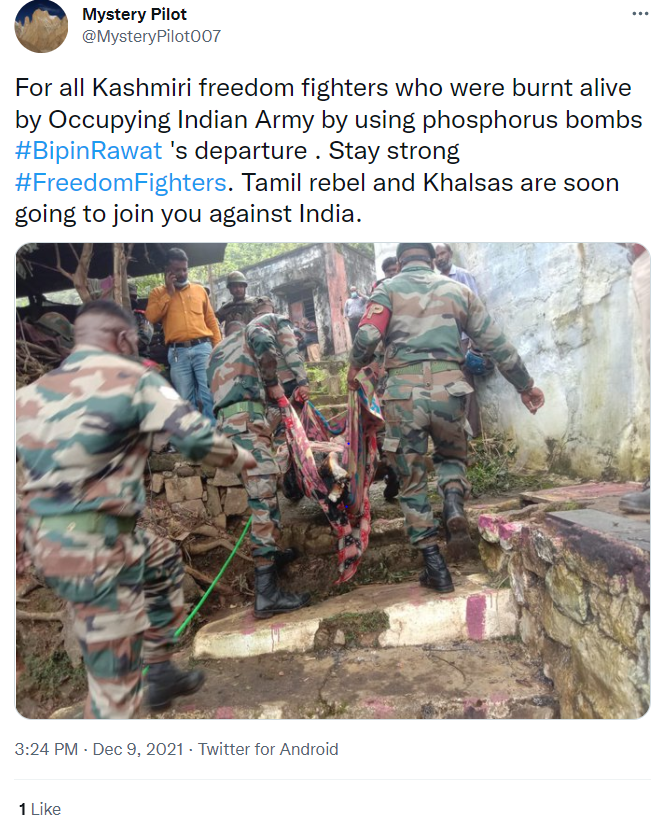 This tweet expresses sympathy for Kashmiri freedom fighters and celebrates the death of CDS Bipin Rawat. It further states that in the near future, Tamil rebels and Khalistan soldiers will attack the Indian army. Image source : Twitter via Naveen Thillai Sankar 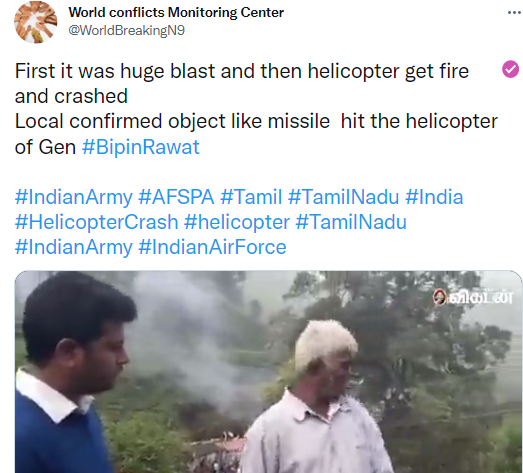 The above screenshot is one such tweet made by the account WorldBreaking. The account is a repeat offender and has spread disinformation in the past - in September 2021, the account tweeted a video falsely claiming it to be of two individuals, who were killed after an eviction order at Assam’s Darrang district. The video was of another police firing incident that happened in Forbesganj, Bihar on June 3, 2011. 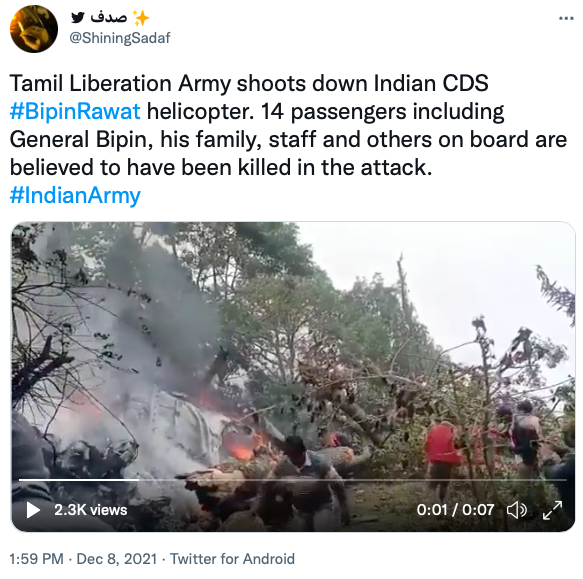 An example of an account blaming the crash on the Tamil Liberation Army. Image source:Twitter via  Ravie Lakshmanan 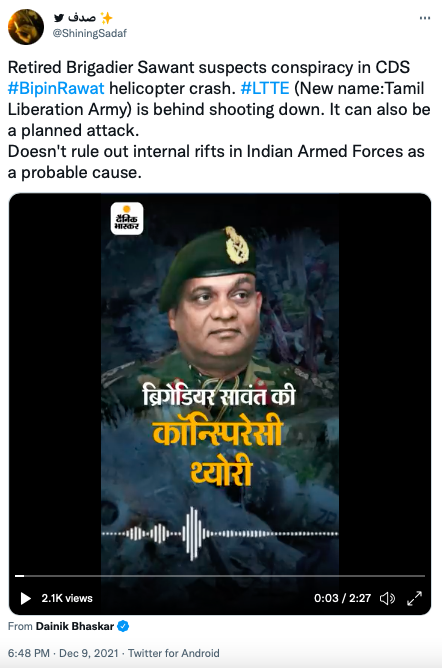 The same account, in a second tweet the next day, also claimed it could be a planned attack, and that a rift within the Indian Armed Forces could have played a role in the crash. Image source: Twitter via Ravie Lakshmanan 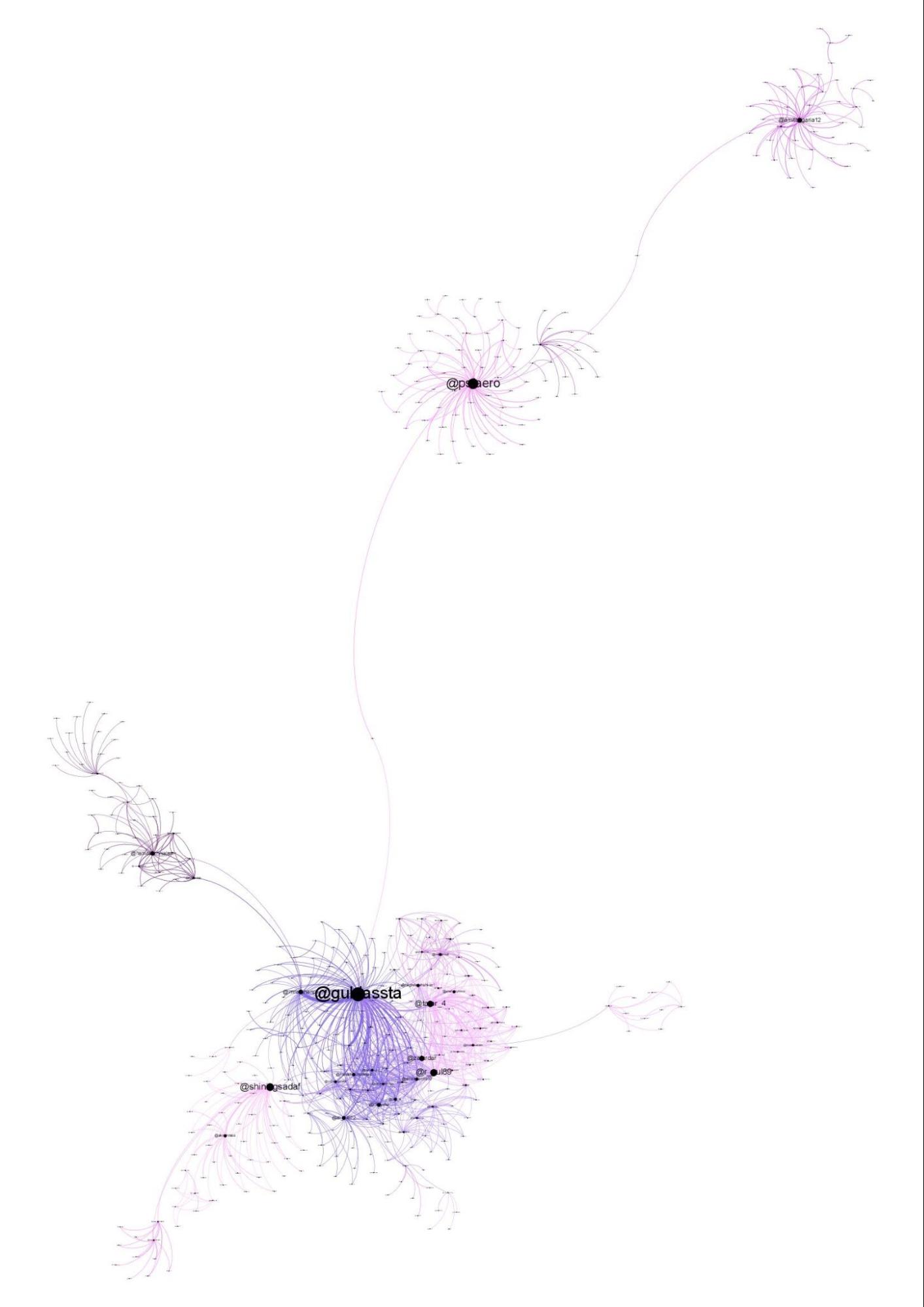 A Gephi network analysis in the above graph shows a bot network of more than 480 accounts attempting to amplify narratives about Tamil Rebels being responsible for the crash. We analysed the top retweeters and found that these accounts were all from Pakistan.

One of the main retweeters, an account called @guldassta, is known to tweet at least 244 times in a day at almost the same times each day, which is indicative of automated activity. 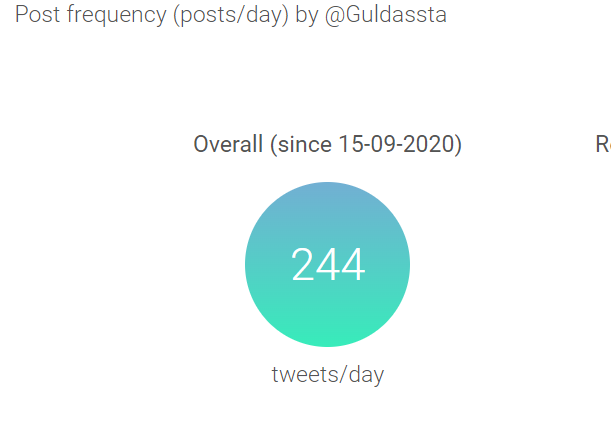 The trend of accounts affiliated to Pakistan pushing disinformation as a result of domestic incidents in India is becoming increasingly common. A few months ago violent clashes erupted in the two northeastern states of Assam and Mizoram over a long standing border dispute.  Logically uncovered a Pakistan-based disinformation network that had been perpetrating polarising narratives about the clashes with the potential to catalyse religious and communal tension. As in that instance, disinformation accounts insinuated that the helicopter crash could have been plotted by domestic groups. While some were intent on conveying the impression that a Sri Lankan Tamil separatist group was behind the incident, other versions of the theory of the crash being a planned attempt to kill General Rawat keenly pointed fingers at insurgents in Nagaland and even China.

A report from Pakistani YouTube channel Alpha News claimed that Nagaland Maoist insurgents were behind the incident, and that Indian Prime Minister Narendra Modi had travelled to Ladakh in the same helicopter a few months ago. “The weather was clear at the time, so there was no chance of an accident due to bad weather. In view of all this, questions are being raised that General Bipin Rawat's helicopter did not crash but was shot down,” the report read. 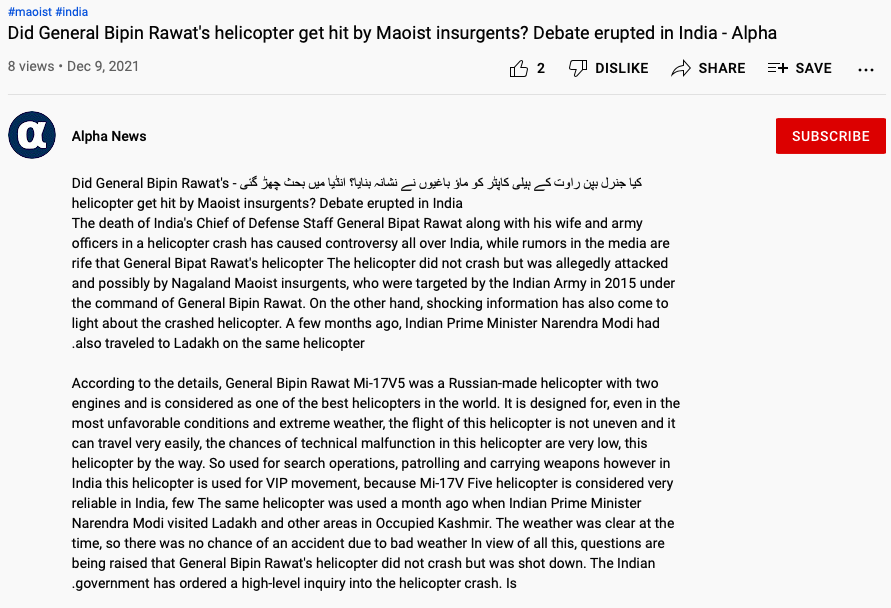 After geostrategist Brahma Chellaney tweeted that “Gen. Rawat's death has an eerie parallel with the helicopter crash in early 2020 that killed Taiwan's chief of general staff, Gen. Shen Yi-ming, and seven others, including two major generals,” Chinese state media such as Global Times claimed that the crash was due to “old and outdated” military equipment and “the biggest enemy of India is not China, but its own backwardness.” 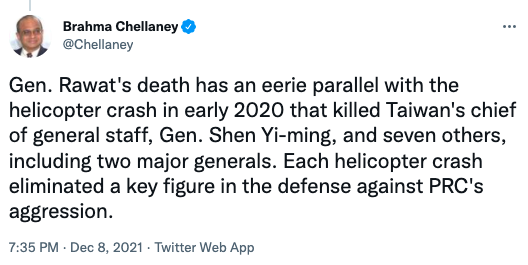 The longstanding Kashmir conflict was also drawn into the disinformation chatter around the general’s death. Amidst tweets putting the onus on a non-existent Tamil outfit for bringing the helicopter down, Pakistan-affiliated accounts also drew comparisons with the state of Kashmir. Pakistani or Pakistan-affiliated accounts are increasingly using disinformation around domestic incidents in India trying to extrapolate their narrative around Kashmir to other states in India and to attempt to demonstrate broad support for separatist movements across the board.

A map from the Strategic Research Institute, which claims to be a “non-partisan, non-political and non-governmental research organization” from Islamabad, is being circulated by many accounts displaying political intent and coordination. 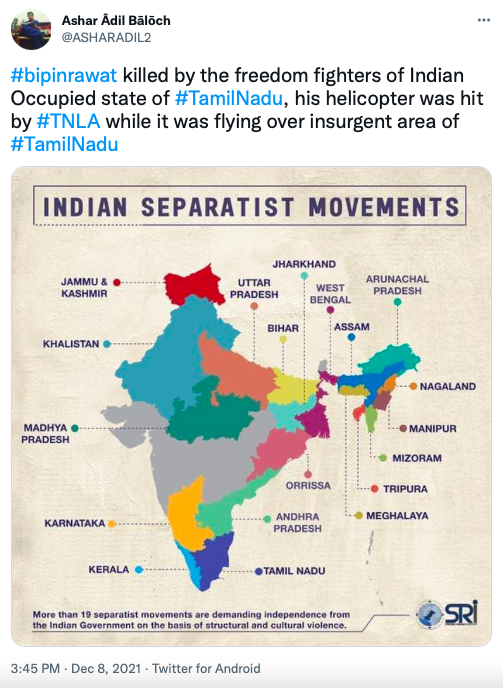 The same tweet is seen in other users with the handle @MultanRock, and @UsmanHaidry5, which indicates copy pasta and coordination. 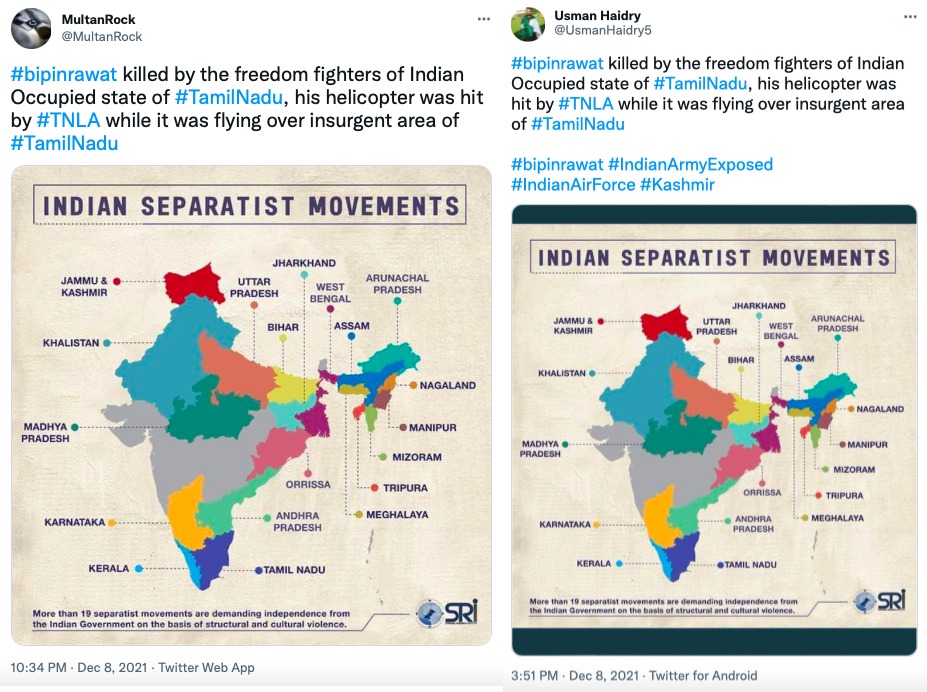 Interestingly, Pakistani media personalities and former government members also are reiterating these theories, which suggests that there is a coordinated and conscious effort to create this narrative of India being an occupier state that suffers from considerable civil unrest. 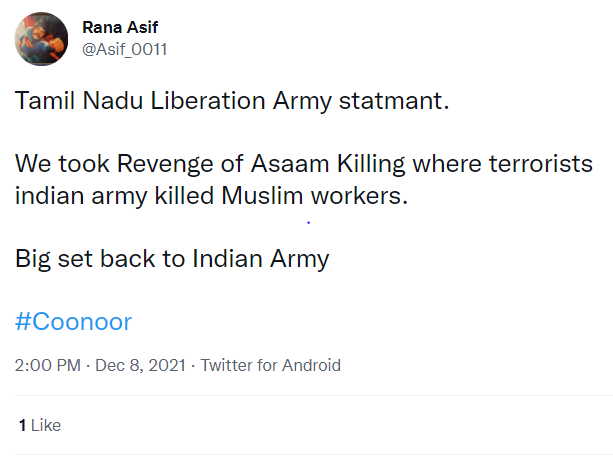 According to Rana Asif's tweet, Tamil rebels have exacted vengeance for the Indian army's recent deaths in Assam. 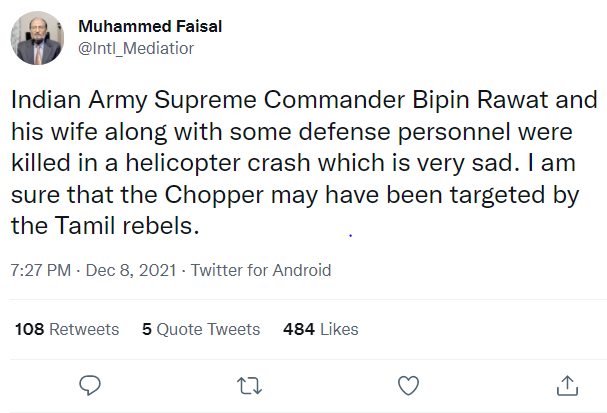 Mr. Faisal Muhammad (former Secretary General of the Pakistan Muslim League and EU-based Diplomatic Mediator) asserted unequivocally that the chopper carrying CDS Bipin Rawat and 13 others was shot down by Tamil rebels. 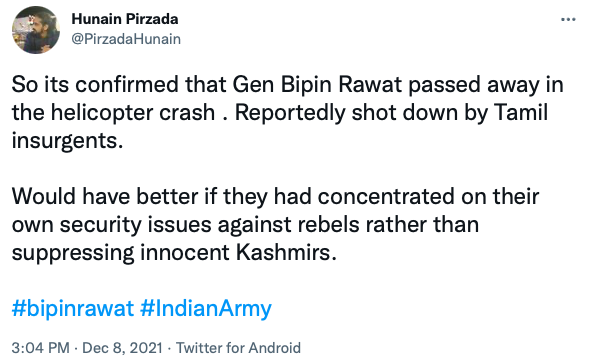 An Islamabad-based Twitter account “بُت شکن” (@QAD_North) tweeted that this was vengeance for General Rawat’s statements on Kashmir.

Pakistan has been known to be using social media to target its adversaries and advance its political agendas. In Sept 2020, Facebook reportedly removed more than 700 Facebook accounts, groups, pages and Instagram accounts that were part of a Pakistani network of “coordinated inauthentic behaviour.” According to a Graphika report, the network consisted of 40 Facebook profiles, 25 pages, 6 groups and 28 Instagram accounts, many of which used fake personas or posed as independent media outlets to post about news and current events with a clear political agenda. “Key narratives advanced by the network included: praise for Pakistan and its armed forces; efforts to denigrate India and highlight attacks by Hindu nationalists targeting religious minorities; support for Pakistani Prime Minister Imran Khan; and promotion of the government-backed China Pakistan Economic Corridor (CPEC) investment project,” it stated.