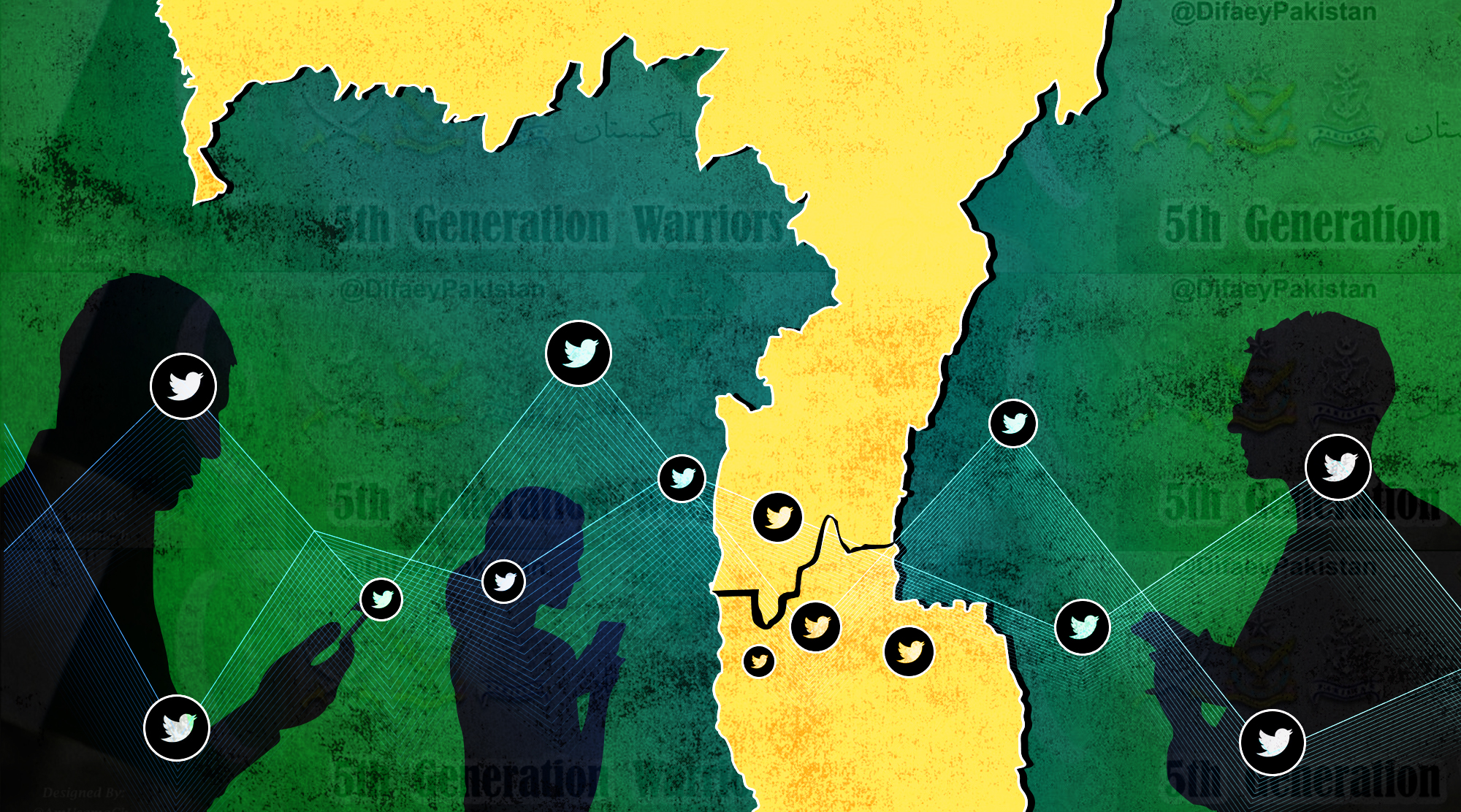 Logically has uncovered a disinformation network based in Pakistan spreading polarizing narratives about the Mizoram-Assam border clashes.

A small cluster of Twitter accounts, using similar images and hashtags, have been openly coordinating their activity to stoke religious and political tensions between the two Indian states. While the accounts appear to be affiliated with Pakistan, it is not clear that this is a disinformation operation directed by the Pakistani state.

In July 2021, violent clashes erupted in the two northeastern states of Assam and Mizoram, over a 150-year-old border dispute. The state of Mizoram (first a union territory in 1972) was carved out of Assam. The states of Meghalaya and Nagaland were previously a part of Assam and then made into states.

The recent clashes between the two have arisen from both the states accusing each other of territorial transgressions from the controversial colonial-era state demarcation lines from 1933. The recent violence in the border town of Vairengte between the Assam police and Mizoram police led to the deaths of six Assam police officers and the injury of at least 60 people from Assam.

The narrative online seemed to be very different from the events unfolding on the ground. Tweets originating from Pakistani users, identified by their profile bios, stated that there was a civil war in India and that separatist movements within the country were gaining momentum.

We were able to identify a coordinated influence operation originating out of Pakistan that was seeding the narrative that there was civil strife in the northeastern states of India and that people from these states were not only at war against the central government but were also at war with each other.

The accounts amplifying this messaging – Mustnowit (now suspended), Usama, and Sharazi – have actively been using the hashtag #FreeAssam along with other hashtags such as #FreeMizoram, #FreeNagaland, #FreeTamilnadu. The accounts have been actively spreading disinformation about India and the Bharatiya Janata Party (BJP), and have tried to capitalize on incidents of religious violence taking place in the country.

The campaign is largely being carried out by IT professionals based out of Pakistan. The account behind these operations seems to be @AmUsamaCh a user who claims in his bio to be a digital media freelance journalist, I.T specialist, graphic designer, and video editor.

We could trace the account leading the operation by looking at the cover pictures of the @DifaeyPakistan, @HfzUsama, and @Sharazi007 accounts. 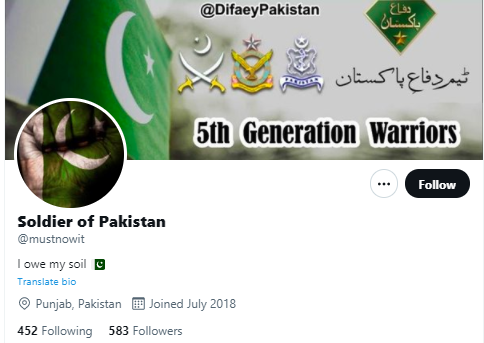 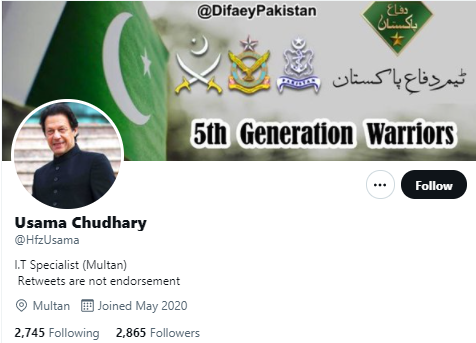 Screenshots of the above-mentioned accounts. Source: Twitter via Dhriti Kamdar

There is reasonable evidence that the account @AmUsamaCh is leading these influence operations along with other self-proclaimed IT specialists. In the cover picture depicted below are the words “Designed by @AmUsamaCh.” The presence of similar cover images is indicative of coordinated inauthentic behavior.

The accounts and the tweets mention – or are associated with – an account called @DifaeyPakistan. This account, which identifies itself as “Team Defense Pakistan,” has a bio that reads “official team account.” In its cover image, transposed against the Pakistani flag and military insignia, are the words “5th generation warriors,” which alludes to 5th generation warfare. 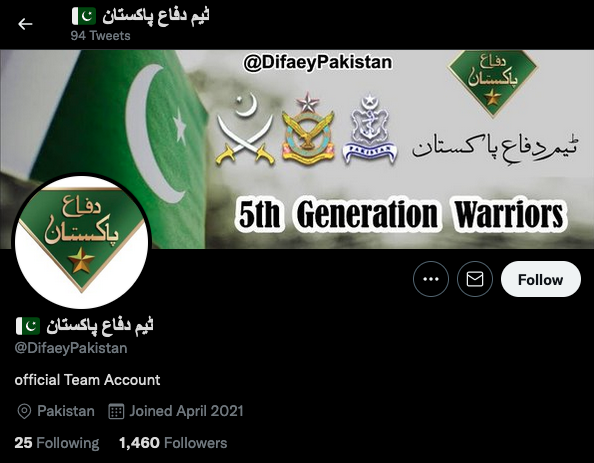 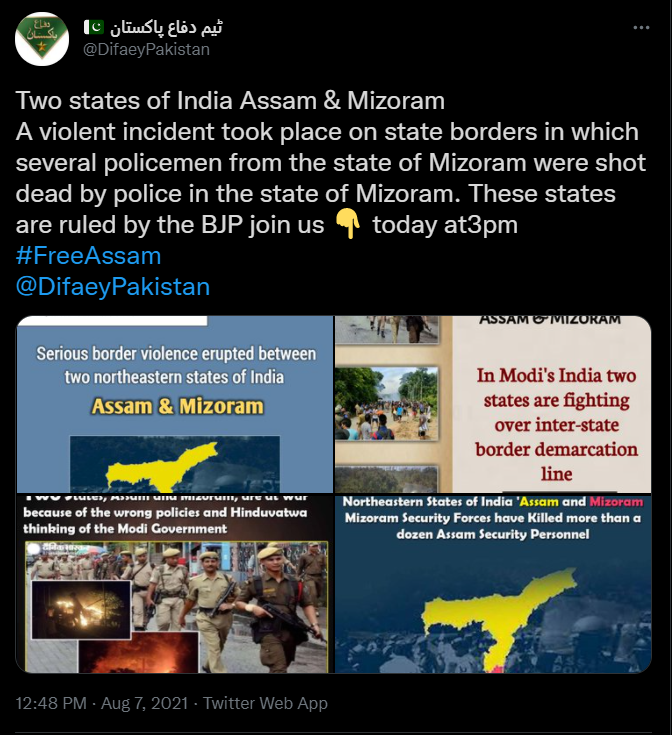 The hashtags used by these accounts to spread disinformation are #FreeAssam and #IndiaFailedPropaganda. The majority of posts with these hashtags originate from Pakistan.

An example of a tweet about the Assam-Mizoram border clashes with the hashtag #FreeAssam.

An example of a tweet on the Assam-Mizoram border clashes with the hashtag #IndiaFailedPropaganda.

Identifying the network promoting the campaign

The following screenshots clarify how we could ascertain that this is a coordinated disinformation propaganda campaign. 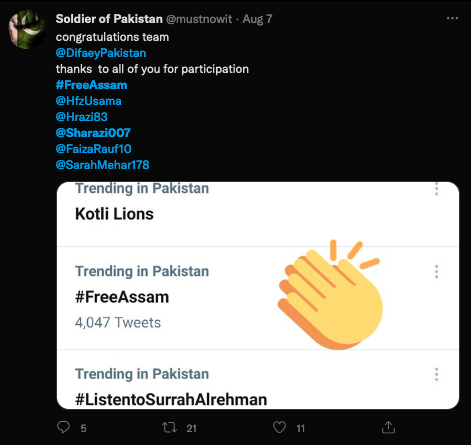 The account Soldier of Pakistan is congratulating the primary amplifiers of the network.

@HfzUsama’s account is one of the prominent accounts in this influence operations circuit as the following tweet exemplifies. 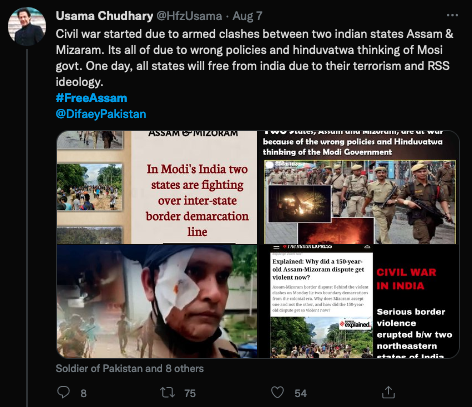 The tactic used by these operators is to ridicule India’s diversity, allude to a division of the union of India, and promote divisive ideas such as those of secessionist groups within the country. An example of this is demonstrated below.

An analysis of the activity from @HfzUsama shows troll farm-like activities: on average 312 tweets per day are posted from the account.

The accounts associated with the #FreeAssam hashtag are as follows:

Below is a Gephi network analysis of the actors involved in this disinformation campaign, showing systematic interaction. The number of retweets from these accounts typically ranges between seven and 21. We noticed that the following accounts were always mentioned in the retweets, possibly for the purpose of amplifying the disinformation.

As depicted in the above analysis, we identified that these accounts are these narratives’ primary influencers, whose content is subsequently re-shared by other smaller accounts to create momentum.

Apart from these networks, we have identified a few other networks and their official handles originating from Pakistan that exist to solely game the Twitter algorithms. One account calls itself Team Pakistan Power and another Strategic Defense Volunteers. These two accounts are also leveraging a network, to discredit India and conduct disinformation operations against India with respect to cricket and politics.

The disinformation campaign is interestingly visible and their network is easily identifiable as being closely associated with one and another using similar images and account mentions. The use of the Pakistani military insignia and flag shows that this is a concentrated effort by foreign actors to take advantage of and spin the narratives around domestic issues within an adversary nation.

In this case, owing to some of the historical issues in the North East of India and the state of Bangladesh (once East Pakistan) being in close proximity to the disputed area, such narratives can be easily subverted. Similarly, the recent evictions of illegal immigrants in India, have allowed for such elements to create narratives around religious friction within the country. The clash between the two states of Assam and Mizoram was itself not widely covered by domestic news media and a lack of awareness of the facts surrounding the issue can lead to such appropriation by foreign bad actors. The volume of this particular campaign was at around 4k tweets and may not have been very impactful however, the motivations and the tactics used by the operators to subvert a domestic clash must be noted.