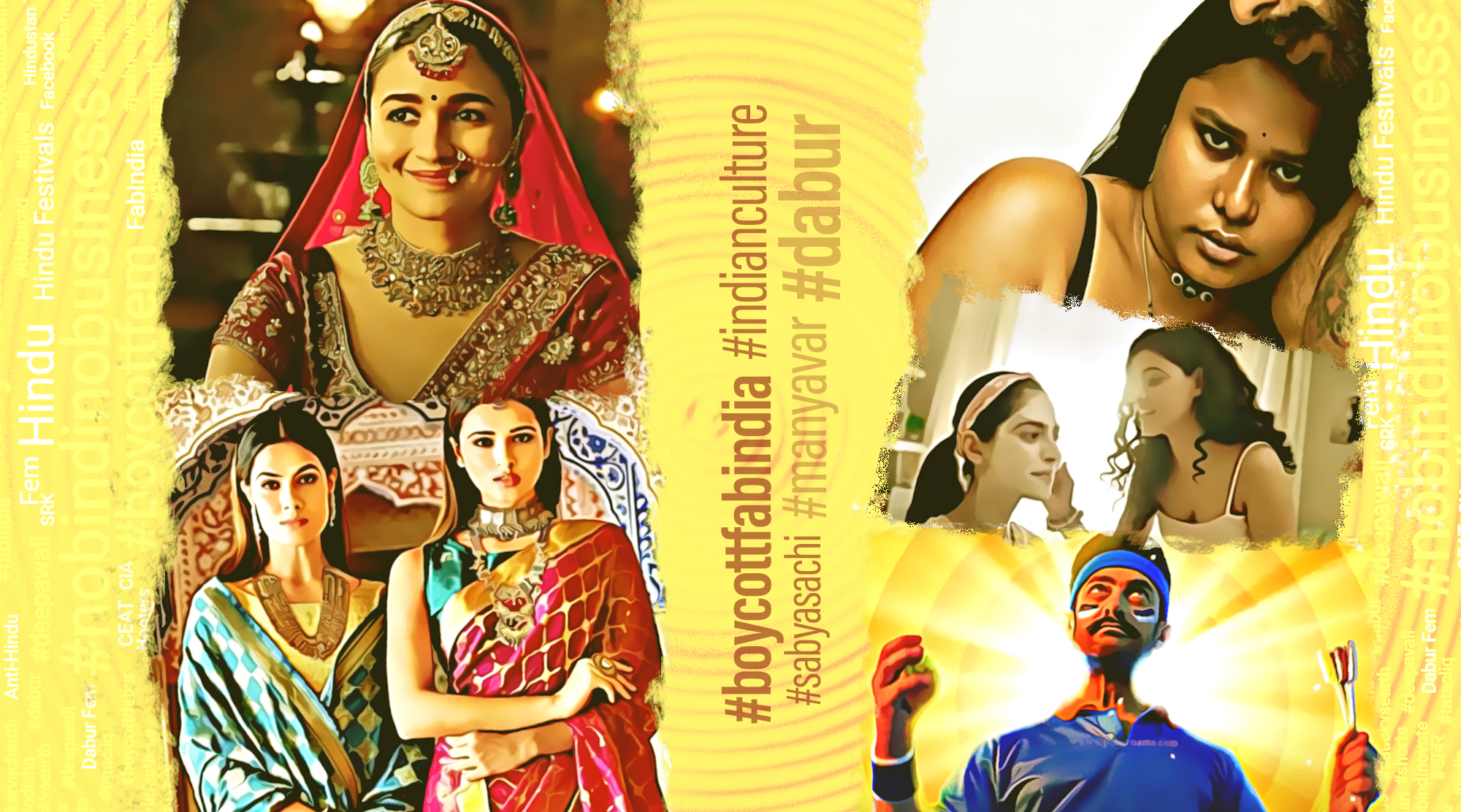 On November 26, Indian designer Sabyasachi Mukherjee launched his Autumn-Winter Collection 2021, posting images on his official account featuring women wearing sarees in hues of beige and heavy necklaces with minimal make-up. But the women had no bindis – the red sticker or mark traditionally worn by married Hindu women on their foreheads. It sparked an outrage. Sabyasachi is famous for his bridal collections, and has styled many A-list celebrities from the Hindi film industry. So to target his enterprise, the #nobindinobusiness hashtag, that has been used to target various brand campaigns, was revived.

This was the second time the designer was at the epicenter of a Twitter troll campaign, having been subject to the first just over a month ago.

On October 31, Sabyasachi withdrew a promotional campaign for his collection showcasing mangalsutras, a traditional necklace worn by married Hindu women. The campaign included intimate portraits of women and men – featuring a dusky, voluptuous woman dressed in black with one such necklace nestled in her cleavage. Usually placed in traditional settings, the image differed from conventional advertisements, since the creative showed the woman’s head resting against a bare-chested man. The withdrawal came after Madhya Pradesh Home Minister Narottam Mishra issued a 24-hour ultimatum to withdraw the advertisement before facing statutory action.

Claiming such “painful incidents” only take place against Hindu symbols, Mishra said, “If Mukherjee has courage, he should do it with some other religion, then we will understand that he is a real brave man.”

Shortly after the brand released images of the collection on its official Instagram page, #BoycottSabyasachi started trending on Twitter on the grounds that the advertisement “hurt Hindu sentiments and ‘insulted Hindu culture.”

The attack on the campaign came soon after another major Indian retailer was forced to withdraw its Diwali advertisement. Popular ethnic wear brand FabIndia was forced to pull down its promotional campaign for the festive season over outrage that the brand demeaned Diwali by naming its collection jashn-e-riwaaz, an Urdu term.

#BoycottFabindia was the top trending hashtag in India on October 18. As of November 26, the total estimated mentions have exceeded 90,000.

The Bharatiya Janata Party’s (BJP) youth wing president Tejasvi Surya catalyzed the action when he tweeted: “Deepavali is not Jashn-e-Riwaaz. This deliberate attempt of abrahamization of Hindu festivals, depicting models without traditional Hindu attires, must be called out. And brands like @FabindiaNews must face economic costs for such deliberate misadventures.” Abrahamization is a term commonly used by India’s rightwing to propagate that tenets of Hinduism are being modified or diluted to have features of monotheistic religions like Islam or Christianity.

Prior to FabIndia and Sabyasachi, calls were made to boycott wedding wear brand Manyavar after an ad featuring actor Alia Bhatt questioned the kanyadaan - an integral Hindu wedding ritual in which the bride’s father “gives her away to the groom”. The #boycottmanyavar tag has an estimated 4,000 total mentions.

The outrage against FabIndia was leveraged to attack other brand campaigns. On October 20, author and rightwing commentator Shefali Vaidya tweeted, “Speaking for myself. Not buying anything for #Deepawali from ANY brand that shows models without a bindi. #NoBindiNoBusiness.”

Referring to FabIndia’s ill-fated Jashn-e-riwaaz collection, her tweet set in motion a troll campaign wherein brands whose ads featured models without bindis were ambushed with calls for a boycott. Vaidya posted a series of tweets elaborating how campaigns that showed models without bindis should be banned for not complying with Hindu culture, and that if they wanted “Hindu money” they should learn to respect “Hindu symbols and sentiments.”

The barrage included tweets where she questioned multiple brands like PNG Jewellers, Tanishq, Tata Cliq, PC Chandra Jewellers, Swarovski, and Reliance Trends for the lack of bindis adorned by models. She also criticized their somber expressions claiming they aren’t befitting of a festival campaign.

As of November 29, 2021, the #nobindinobusiness hashtag has more than 159,000 mentions and Vaidya has also added the hashtag in her Twitter bio. After Vaidya’s first tweet under #NoBindiNoBusiness, the narrative snowballed into numerous brands receiving backlassh for their Diwali campaigns.

This incident is part of an increasingly common organized trolling and outrage at creative processes such as advertising and filmmaking. While attacking brand ads is not a quintessential disinformation campaign, the exercise was effective, since many retailers had to retract their advertisements and issue apologies.

What makes this manufactured outrage unique is that the troll army chose an innocuous element in the content to pummel. Those involved have to merely criticize or point towards a campaign that is unsavory to populist ideologies and ideologues to trigger a reaction. In comparison, political/religious issues need certain narrative-building. Leveraging political issues for disinformation campaigns requires more effort -- not only to construct a narrative, but also to draft counterarguments.

I’m not sure if the rightwing attack on some of the ads could be termed either misinformation or disinformation. They are different perspectives, based on which they collectively force brands to comply.

“I’m not sure if the rightwing attack on some of the ads could be termed either misinformation or disinformation. They are different perspectives, based on which they collectively force brands to comply. In my view, neither the ads nor the rightwing reactions are saying something illegal or incorrect,” says Karthik Srinivasan, communications strategy consultant and former national lead of Social@Ogilvy, Ogilvy and Mather says. “The only illegal act here is when the online anger moves offline, the way it happened with the Tanishq Ekatvam ad last year.”

Srinivasan was referring to the withdrawal of a television advertisement by jewelry brand Tanishq that showed a Muslim family preparing a traditional Hindu baby shower for their pregnant Hindu daughter-in-law. While some praised it for its depiction of religious harmony, #BoycottTanishq started trending on Twitter. The brand was accused of promoting love jihad, a conspiracy theory wherein Muslim men entrap and marry Hindu women solely to convert them to Islam.

Tanishq eventually withdrew the advertisement after employees of a showroom in Gujarat’s Gandhidham town received threatening calls and were visited by a group of men who coerced the staff to put an apology note outside the store.

A Manyavar store in Navi Mumbai also found itself in a similar situation recently when a pro-Hindu outfit staged a protest outside the showroom for its ad featuring Bhatt that “misrepresented” the kanyadaan.

“There are no documented examples of brands facing anything more than online outrage. Tanishq announced great results last year despite having two heavily-outraged campaigns,” says Srinivasan on whether brands face monetary impact. “To some extent, the real-world impact of cancel culture depends on multiple factors, including the need of the product and availability of equivalent options. It may affect products that have a much shorter consumption period, like movies, more than physical products that may outlast an outrage period.”

If the financial repercussions may not have crossed to dangerous territory, the backlash culture is bound to foster an environment where a sense of caution dominates the campaign inception process. Srinivasan says, “The simple logic could be, ‘Why unnecessarily make the product unlikeable? Let’s just submit to all the implied rules being discussed during the outrage and make everyone happy’. But everyone cannot be made happy - anything can be showcased in a manner to create outrage. For example, Fabindia incident started with the name of the range, moved to the lack of bindi on some models, and eventually moved to the color of the clothing being green. It’s a bottomless pit.”

The #nobindinobusiness campaign conveniently ignores the importance of choice.

The bindi flare-up highlights how a cultural element can be distorted to create a misleading narrative as part of a larger exercise at controlling perceptions. The #nobindinobusiness campaign conveniently ignores the importance of choice - it is up to women to decide if they want their foreheads to be adorned with bindis or if they prefer the bindi-free look.

Seema Gupta, a marketing consultant and ex-professor at the Indian Institute of Management in Bengaluru, says the approach adopted by brands will depend on the brand personality. “Usually big brands are trolled. So brands that are traditional will align with the current narratives whereas counter-culture brands may leverage this to build their image,” she says.

The way forward for brands

A report published by The Economic Times last year revealed that the Tanishq Ekatvam episode was pushing many brands to lay down strict internal guidelines for avoiding social media backlash. Topics such as caste, religion, and political commentary were off-limits. A large, fast-moving consumer goods brand that sells dishwashing soap in Bihar and Uttar Pradesh had decided not to show women “in an authoritative fashion,” the report stated. It revealed that brands currently channelize more money for troll management on social media. Digital tools from analytics companies like Unmetric and Brandwatch are being increasingly used to track online sentiment, and digital conversation specialists are also being hired to preempt trolling.

“There is more risk with social media spreading these campaigns much faster, making it harder to mitigate. Where there is audience attention, fake news and false narratives tend to flourish easily,” says Nikhil Dey, executive director at AdFactors PR.

For brands, decoding the right way to engage with consumers in the event of a social media furor is of paramount importance. “As long as the counterpoints are presented respectfully, brands should engage meaningfully,” according to Srinivasan, who says engagement should not stop at merely broadcasting the advertisement. “Standing up is the only way to disarm bullies.”

Politicians with formidable grassroots following, often linked with Tamil cinema, have led most major electoral exercises in the state of Tamil Nadu for decades since the times one of it’s most successful actors and politicians Maruthur Gopalan...