"No Kink at Pride" Fuels Antigay Agenda on Telegram 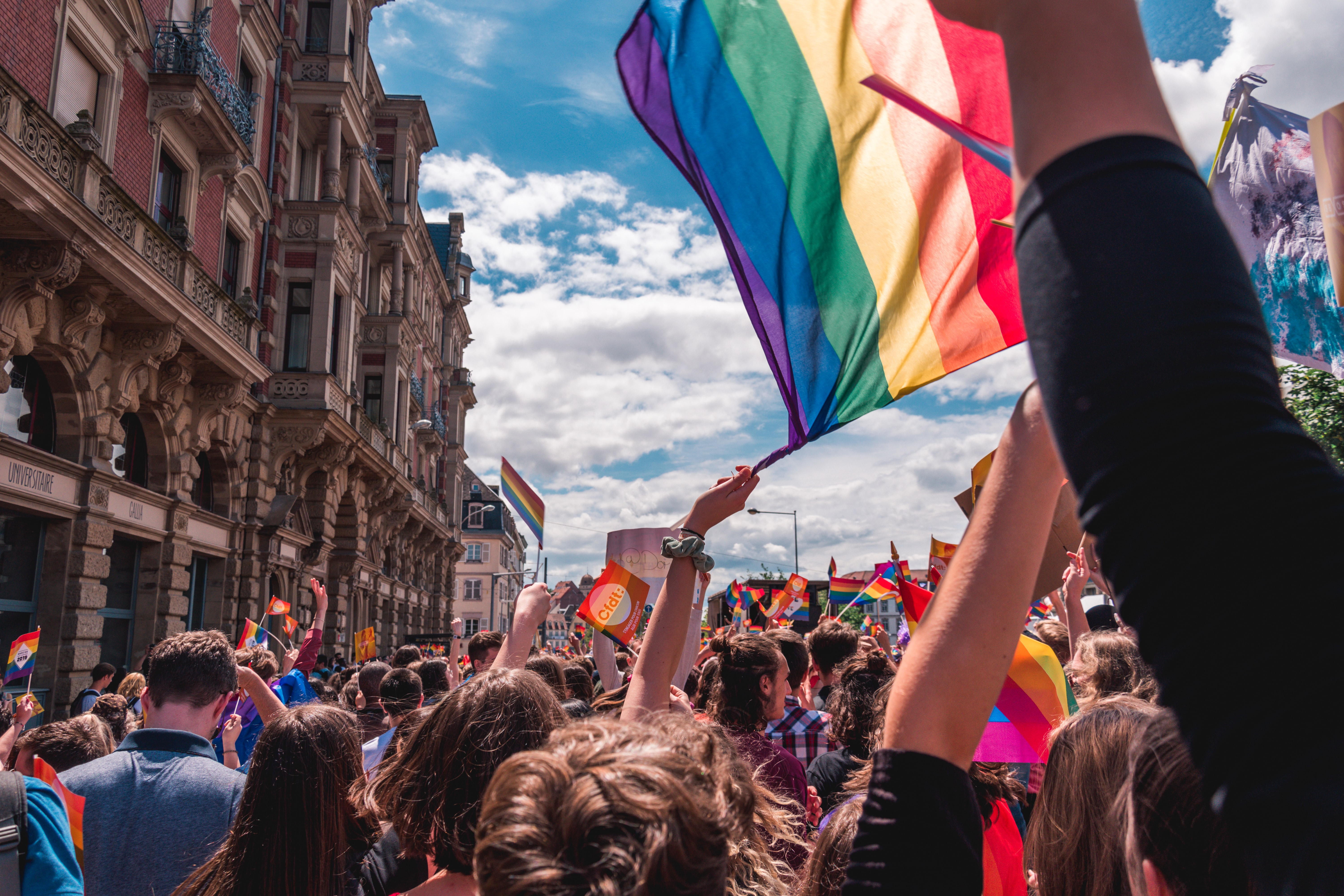 Happy Pride Month everyone! Extremist right-wing Telegram channels are using the "no kink at pride" discourse to push a number of antigay, transphobic, and even antisemitic narratives.

“No kink at pride” is a discourse that recurs every June, and has done so for decades. Although “kink” is simply a kind of fun sex, in the context of this discourse it usually refers to leather gear or fetish wear. The question is whether LGBT people should tone down the visible sexuality at Pride celebrations, in order to make the event more family-friendly. Children can’t consent to see sexy things, and plenty of people simply don’t want to. On the other hand, queer sexuality is often seen as inherently transgressive, and pride is a time of year when those relationships can be celebrated after many years of social and legal repression. And since our glorious leaders haven’t made participation in pride parades mandatory yet, if you’re truly offended, you could just stay home. Thus goes the debate.

There had been some speculation on Twitter that the ‘no kink at pride’ discourse could easily be used as a wedge issue. We are extremely unhappy to confirm these suspicions.

Our investigation focused on three pieces of content shared between six loosely connected Telegram channels. The smallest had 5k followers, the largest 100k, with the average being somewhere around 30k. It is likely that they drew users from the same pool of users, as posts were often forwarded from one channel to another. Four of the channels were U.K.-based, and two were U.S.-based.

The first piece of content was a series of photos of distressed children near-naked people, or people in fetish gear, simply labeled “PRIDE [rainbow flag emoji]”, sometimes with additional text in the image about how miserable the child was. It’s not clear that all of these pictures were actually taken at Pride celebrations. 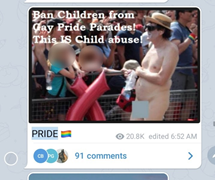 As of the morning of June 3, each of the memes had more than 20k views on the largest channel alone, and 60-90 comments each. These memes falsely conflate nudity, pedophilia, kink, and queer sexual expression. These harmful stereotypes have been used for generations to oppress queer people. The comments were, without exception, really horrible to read.

The next was a repurposed video from the LGBTQ site PinkNews, which portrayed queer kids with their supportive parents. The video showed several of the kids participating in Pride celebrations.

This same video was shared again on two linked channels a few hours later, but with a new caption: “WTF this is Child Abuse?” Again, as all of these channels frequently cross-post content, it is likely that the admin of the smaller channels picked up the video from the larger.

The comments were, without exception, really horrible to read.

Next up is a meme from three channels, each with 10k-30k subscribers, which shared the same piece of content simultaneously, suggesting they have the same admin. It does not explicitly make the argument that ‘kink at pride’ harms the children, but it does implicitly, as it conflates visible queer sexuality with child abuse.

Besides the usual barrage of homophobic commentary, some commenters also expressed the extremely antisemitic idea that the presence of visible queer sexuality, or even just the existence of trans people, was the work of a global Jewish conspiracy.

A long post from the admin of the largest channel had this explanation, which lays out pretty clearly the thrust of the argument. In this channel, “kink at pride” is child abuse. It broadcasts the lie that pride celebrations are full of pedophiles, thus inculcating in its audience a prejudice against visibly queer people.

This message from the channel’s admin clearly equates a visible display of kinky queer sexuality with child abuse. (Notably, and somewhat ironically, he opens this screed by saying that he “doesn’t care” about any of this.)

It ends with a call to action: “it’s time to make a stand in the most public way possible.”

Many of these channels have the stated purpose of being anti-mask, anti-lockdown or anti-vaccine. These channels are also filled with forwarded messages from other, more extremist channels, making it easy for a casual user to be exposed to and drawn into QAnon narratives or outright nazi propaganda. These channels are only a single click away.

“No kink at pride” is an extremely online™ way of phrasing this point. There’s no evidence to suggest that the same people who push the “no kink at pride” discourse on platforms like Twitter, Youtube, and Facebook are at all the same people who lurk in these Telegram chats, nor does it seem likely that they overlap. But the narrative is the same, and it conceals rightwing cultural goals, i.e. erasing queer people from public discourse and visibility. Twitter user @SzMarsupial noted in several threads that they had experienced days of online harassment for wading into the "kink at pride" discourse, some of which explicitly employed the homophobic slurs used on these channels.

There’s no good way of measuring the direct impact of this hateful propaganda, but it is finding new, massive audiences that might not otherwise hear it. This is especially dangerous, as Logically’s own Joe Ondrak reported last December, as it creates a radicalization pipeline.

Although not all kinksters are queer, and not all queer people are kinksters, there is a longstanding connection between kink and queer communities., and that’s due to their transgressive nature. Jamie Lawson in her ethnology Rainbow Revolutions, explains:

In a recent VICE article, Daisy Jones argues that the “kink at pride” discourse needs to be retired, because intentionally or not, it serves as a covert attack on gay rights, and gay rights are already under assault nearly everywhere. In the U.K., there are no trans MPs and few trans judges, and the legal rights of trans people are in question. Just recently, plans to reform the GRA to include self-ID were scrapped. The Times publishes nearly one article a day about trans people but has no trans contributors. In the U.S., a wave of transphobic legislation is sweeping across the country, including some total bans on trans healthcare for children.

The gay rights organization GLAAD, in a May report, found that social media platforms were “categorically unsafe, across the board” for LGBTQ people. Although all of the platforms brand themselves as celebrating gay rights, LGBTQ people faced extraordinary harassment and abuse on all of these platforms. President and CEO Sarah Kate Ellis made it clear that it wasn’t just harassment though — those narratives were used to organize opposition to gay rights online.

Ellis told Axios: “There are real-world consequences to what happens online. There are direct lines you can draw between the over 100 anti-trans bills that are now circulating at the state [level] and what's being produced and pushed out within the social media world.”

As @SzMarsupial writes, the language is beginning to cross the “blood-brain barrier” of online/offline spaces.