As we already know, conspiracy theories can come in various forms and degrees of maliciousness, ranging from the innocuous to the politically motivated and outright dangerous. Some of them may even contain a kernel of truth.  In other cases, conspiracy theories can be used as an effective recruitment tool in a wider grift, where the main purpose of the disinformation being pushed will be to convert people’s beliefs into financial profit. Predictably, in times of economic uncertainty, demand for a sense of hope—even the false kind—soars; add a pandemic and a lockdown to the mix and it can quickly create a ripe terrain for financial scams looking to exploit people’s need for that hope by promising get-rich-quick schemes and sky-high returns on investment. The possible repercussions are frightening to even think about.

Over these past few months, conspiracies about an imminent global economic reset, a mysterious act named NESARA, and a new era of gold-backed cryptocurrency to be ushered in by Donald Trump have been seeing a surge in popularity on social media. If any of this  sounds  remotely familiar to some of you, it may be because NESARA has been around for decades, fooling thousands (and counting) since first making an appearance in the late 1990s.

What is the National Economic Security and Recovery Act (NESARA)?

In the 1990s, Harvey Francis Barnard proposed a set of economic reforms centered around ideas such as debt forgiveness and an overhaul of the monetary system, mainly conducted as an academic exercise towards his doctoral degree. Barnard, who believed that debt was the largest inhibitor to U.S. economic growth, drafted these proposals in his self-published book Draining the Swamp: Monetary and Fiscal Policy Reform in 1996, sending copies to every member of Congress. These were, however, largely ignored and never actually introduced before Congress, so Barnard published them online under a new title Draining the Swamp: The NESARA Story – Monetary and Fiscal Policy Reform.

What was possibly meant as a post-mortem publication of the NESARA story ended up mutating into a piece of conspiratorial mythology that would go on to have a life of its own, far removed from Barnard’s original concepts or intentions. A ‘cybercult queen’ by the name of Shaini Candace Goodwin, a.k.a. "Dove of Oneness,” became one of NESARA’s most vocal champions, but it was her seeding of the conspiratorial element that would in the end reel in and swindle thousands: according to Goodwin, a law implementing NESARA had by then already covertly been passed, by President Bill Clinton, and was to be implemented on the morning of September 11, 2001, but ultimately sabotaged by the 9/11 attacks on the World Trade Center, which she claimed were orchestrated by then-president George W. Bush. In other words, debt forgiveness had been approved, it was coming, but the evil powers-that-be were doing the unthinkable to make sure it never reached you.

In a 2004 piece for the News Tribune, Sean Robinson, who reported extensively on Goodwin and NESARA at the time, noted that on September 11, 2001, mere hours after the World Trade Center and Pentagon attacks, Dove “posted the message that made her a star”: "The three targets today were ALL connected to NESARA and the banking changes. I just learned that at 9:00 a.m. in New York this morning, there was an IMPORTANT banking activity set to be activated in the IMF international banking computer center in the World Trade Center! This was obviously WHY the World Trade Center was attacked TODAY at just before and after 9:00 a.m.! ... The orders for these plane attacks came from U.S. citizens who are trying to stop our deliveries/funding and NESARA."

As Robinson noted, Goodwin’s legion of followers bought into her story en masse. Prompted by Goodwin, they would go on to “send letters, postcards and e-mails to the U.S. Supreme Court, the Pentagon, Congress and the halls of international justice (…) wave banners, pass out fliers and hold demonstrations on three continents, demanding announcement of a secret law that doesn't exist, anticipating the delivery of easy fortunes that never come.” Goodwin, who had already by then already “declared bankruptcy at least once,” owed the IRS $12,000, and lived in her mother's mobile home, claimed to have connections with “highly placed sources among leaders of government and high finance” and “knowledge of a war between the forces of good and evil over the secret NESARA law.”

Barnard promptly distanced himself from Goodwin by publishing a note on the NESARA website. "If you believe any of that,” he wrote, “you might also want to start looking for oceanfront property in Nebraska.” But to Goodwin, as well as to her followers, Barnard’s approval—or lackthereof—mattered very little at that point. Goodwin had an explanation: "WHY would the people at the NESARA website commit 'TREASON punishable by DEATH' by telling anyone who writes them that NESARA secretly passed in March, 2000?" And so NESARA lived on in its mutated conspiratorial form despite Barnard’s attempts to squash it.

It’s unclear just how much money Goodwin managed to swindle out of her followers, but it would appear that her involvement in another infamous scam just a few years earlier served as a blueprint for some aspects of what Goodwin did—or at least intended to do—with NESARA. In some of her early writings, Goodwin referred to herself as an “Omega investor” who waited for her "prosperity deliveries just like everyone else” and discussed communications with Omega founder, Clyde Hood.

Started in 1994 by 66-year-old retired electrician Clyde D. Hood, the “sham investment fund” Omega Trust and Trading ended up defrauding over 10,000 followers of a total of over  $12.5 million. Hood had targeted a predominantly devout Christian audience using a similar strategy used later by Goodwin and countless others—claiming secret insider knowledge—in his case a “vision from God to help the little guy,” as well as making up Fortune 500 connections and promising “50-to-1” returns on investments. For years, Hood talked of a payoff that was “just around the corner,” blaming any delay that would arise on “bankers or the government.” Hood was eventually prosecuted and found guilty of fraud, in court admitting that Omega was a straight-up scam and that the connections were fabricated. But when attorneys tried to reach Omega’s investors, they quickly realized that many of them, urged by Dove and others to stay silent, had no interest in cooperating with the police or government, still believing that a payoff was coming.

Every few years, NESARA rears its ugly head, often coinciding with times of economic hardship, and often accompanied by its global counterpart: GESARA (Global Economic Security and Recovery Act). In 2020, NESARA has managed to merge with other current conspiracy theories that revolve around the baseless and pro-Trump QAnon, where supporters have co-opted the global reset narrative to announce that a new era of debt forgiveness and monetary reform—where cash would be replaced with a gold-backed cryptocurrency—would imminently be ushered in by none other than Trump. The fact that Barnard's book has the same name as Trump's 2016 election mantra, Drain the Swamp, may be a coincidence—but to QAnon supporters it reads like evidence.

Our analysis reveals the impact that the COVID-19 lockdowns have had on the popularity of NESARA/GESARA beliefs, though this may also be indicative of the explosion in conspiracy beliefs more generally.

An analysis of NESARA and GESARA posts on Facebook over the past 12 months shows a significant jump in their number and interactions with them, peaking at 85.2k interactions at the end of May this year. The graph also shows a general increase in posts around the theory since the time lockdowns and furlough schemes were implemented around the world.

Early posts were from a curious mix of New Age mysticism, pro-Trump, NESARA groups, and UFOlogy pages - groups that are now finding unlikely common ground under the QAnon banner. Posts listed as having the most interactions from the past few months show just that: QAnon groups, right-wing Christian ministries talking about Trump decreeing a move to gold-backed currency, and a general air of QAnon theories permeating the aforementioned groups. What is astonishing is the global reach of this theory. Posts in English, Italian, Polish, Spanish, Greek, and Malay are all present in the top 50 most influential Facebook posts on the topic. Many of these posts had been shared thousands of times.

Analysis on Twitter told a similar story. From mid June this year, NESARA and GESARA was the topic of 334,912 tweets coming from a pick 'n' mix of 'Starseeds', Cryptocurrency gurus, and a smorgasbord of QAnon accounts at various levels of dedication all tweeting with excitement about the inevitable "Global Reset" in a variety of languages. The standard QAnon fare of reading into anything from the background of Trump's press appearances is used as proof that debt forgiveness is on its way. 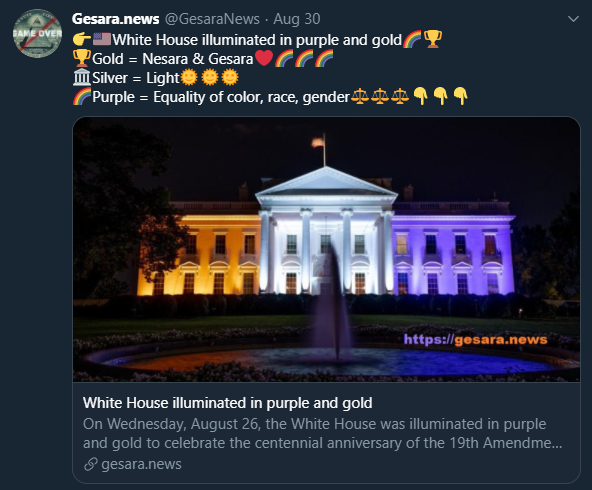 A fascinating development is the phenomenon of users offering up proof of their debt being wiped and that NESARA/GESARA is actually upon us. Though nobody appears to have an answer for why the global reset is apparently an uneven and dripfed process. 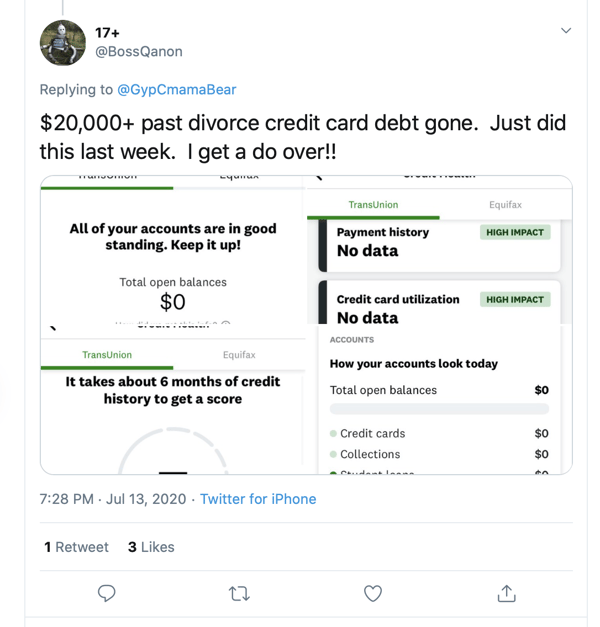 On Instagram, the story is the same. Posts under #NESARA and #GESARA catch every conspircy going, from the recently debunked Wayfair scandal, to aliens living among us and the illuminati. Again, as with all other platforms, interest has spiked in the months after lockdowns. 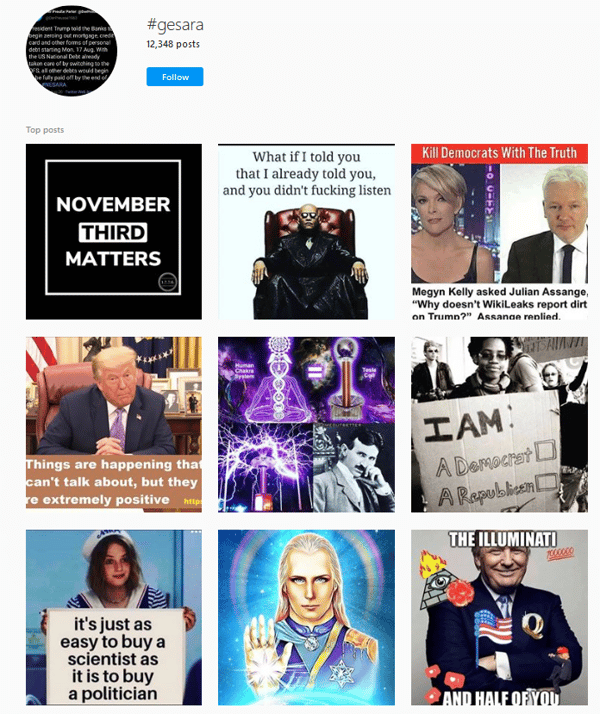 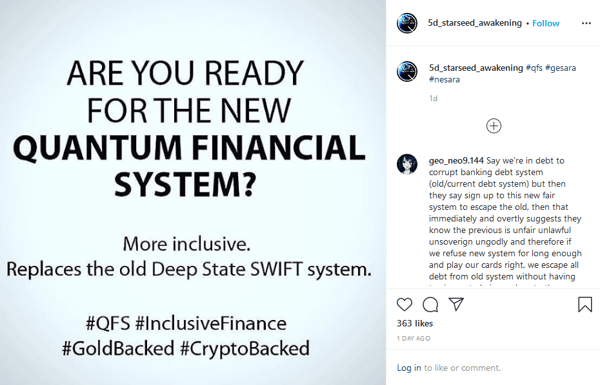 When we look into many of the individual accounts displaying signs of NESARA/GESARA fever, we can notice just how steadfast believers are about this imminent global reset that promises to wipe out all their debt—and that's where things could get dangerous. Needless to say,  the allure of fast money and the promise of disappearing credit card debt could prove to be catastrophic for obvious reasons. After all, what’s a few extra grand on a credit card when you're persuaded a clean slate is coming.

Since the start of the coronavirus pandemic, we've seen a multitude of cures and treatments promoted in the news and on social media, despite there being very little evidence to back any of them up. Most famously, during a press briefing on March...

Over the last month, we reported how US president Donald Trump began to promote the drug hydroxychloroquine as a miracle coronavirus cure after seeing a segment on Fox News; we also reported how Trump has politicized the drug since then, using it to