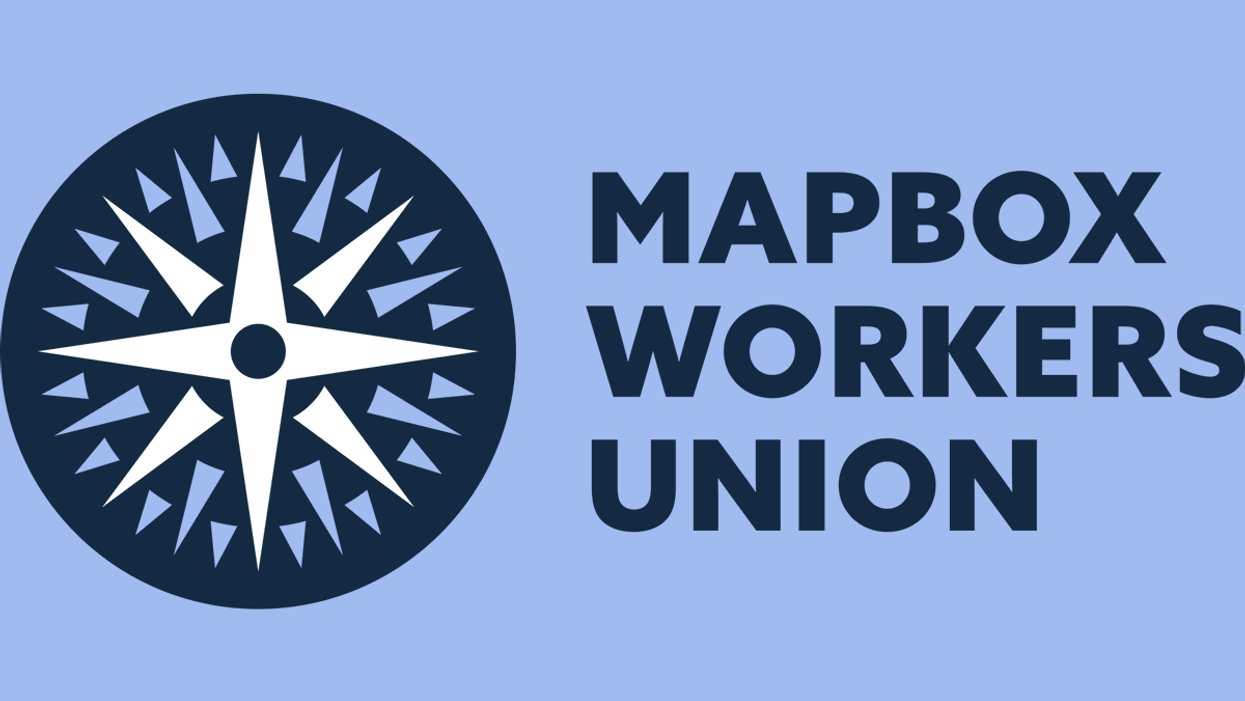 A supermajority of Mapbox’s U.S. employees — 147 out of 222 — announced their intention to form a union, filing with the Communications Workers of America last Tuesday. The membership cuts across all roles and departments throughout the country. Under U.S. labor law, an employer can either voluntarily recognize the union or ask the National Labor Relations Board to oversee a vote of all eligible employees in 45 days. Management has yet to respond and Mapbox has not responded to a request for comment from Logically.

Mapbox is the largest company you’ve never heard of. “If you’ve interacted with a digital map, it’s probably a Mapbox map,” said Josh Erb, speaking on behalf of the union.

Flight paths on Skyscanner, data visualization on the New York Times, the green blobby animations of precipitation on your Accuweather  — all of these are Mapbox products.

Rather than making the maps themselves, Mapbox supplies data and tools so that its clients can build a map most suited to their own purposes. This makes its product endlessly customizable in function, size, and style. Flight paths on Skyscanner, data visualization on the New York Times, the green blobby animations of precipitation on your Accuweather App, streets on Facebook, your delivery on Instacart, places to go on Lonely Planet — all of these are Mapbox products. More than 45,000 apps use Mapbox, and their monthly user base is estimated at more than 600 million people.

But unlike other tech giants, Mapbox has fewer than a thousand employees. And though it has main offices in San Francisco, Washington D.C., and Minsk, most workers are remote.

“Mapbox is full of creative and supportive people, and the union is first and foremost a desire to preserve that,” Erb said. “We don’t know what the future holds – having the solid support and foundation of this union, and standing together as a supermajority, is a great way to make sure we’re ready for whatever comes.”

In addition to typical collective demands for fairer wages and job security, the Mapbox Workers Union (MWU) is advocating for more say in how its products are used. Some of the union's demands are to have a say in what contracts the company chooses to accept. Theoretically, anyone from the Proud Boys to ISIS (well, probably not ISIS) could use Mapbox products to, say, harass undocumented immigrants while trying to cross the border, or track protesters as they try to fortify themselves against attacks from a militarized police.

We build beautiful maps and tooling only to find out they are being used for politically dubious or nefarious purposes.

“More and more often, we build beautiful maps and tooling only to find out they are being used for politically dubious or nefarious purposes,” the FAQ section on their website reads. “We are seeking complete transparency into how customers use our services. Additionally, we will reserve the individual right to refuse to work on any projects that conflict with a worker’s ethics and to do so without fear of reprisal; as well as the ability to deny service to any customer completely if put to a majority vote by the workers.”

Bhavika Tekwani, a software engineer, put it plainly: “Because our industry is playing a growing role in advancing fascism, wealth inequality, and white supremacy, unions are the only way tech workers all over can stand together against the unethical use of their labor towards these ends and reckon with the impact we're having on the world.”

Unions in the software development world are rare, but there has been a rash of them in the past six months. Glitch Union, home to Trello and Stack Overflow, was the first to successfully bargain with their employer, which happened in February of this year. The process, according to a joint press release from the Glitch Union and the Communications Workers of America, was unusually smooth: “Glitch’s management, which voluntarily recognized the union after it was announced, is an exception and should serve as a model for executives at other tech companies.” Tech workers at NPR and the New York Times have also formed unions, and writers at the videogame company Voltage went on a successful 21-day strike for a wage increase.

“The best way for leadership to meet us and make sure that Mapbox continues to be a great place and have a mutually constructive relationship would be to voluntarily recognize [the union]. But at this point we’re still waiting,” Erb said.

Mapbox’s parent company SoftBank hired former Amazon executive Peter Sirota on March 1 as the new CEO for the technology company. And since as of April, Softbank was reportedly in talks to make an IPO, it’s possible the change in leadership was directly related.

Trevor Specht, an IT developer, hinted at such a change in his profile on the union’s page. “I want Mapbox to once again be the place I joined that inspired me, gave me hope, excitement, and opportunities for learning and growth; a place I knew cared about people, not just profits,” he said.

Although Erb said he couldn’t point to any specific changes that Sirota had made yet, he emphasized that in case there were big shakeups, the union members would be “proud and excited to support each other and have a seat at the table as decisions were made.”

Sirota’s former employer Amazon has gone to extreme lengths to bust unions. During the union drive in Alabama two months ago, Amazon pressured the U.S. Postal Service to install a post box in front of the warehouse, despite a ruling from a federal judge which barred them from doing so. An Amazon worker testified to the NLRB that he saw Amazon employees open and search the ballot box. They also pressured the city of Bessemer to change the timings on the traffic lights so that organizers wouldn’t have the opportunity to approach workers who were stopped at the intersection. This traffic light change was potentially even the cause of road accidents.

“The union is already formed,” Erb said. “The voluntary recognition would be the way to start this relationship out on the right foot."

However, after days of silence, the only communication between the two seems to be the Mapbox official Twitter is congratulating the New York Times for creating Pulitzer-winning maps with its product, and the MWU’s account quote-tweeting it to credit the workers at the New York Times unions, including their newly-formed Tech Guild.

It’s the crossover event you didn’t know you needed: an interview with an mRNA vaccine scientist who is also a furry. Chise has developed a following on Twitter for posting very informative threads about vaccine development and the subsequent...