Make QAnon a Trump Cult Again: Save Our Children Marches Lead to a Split Qmmunity 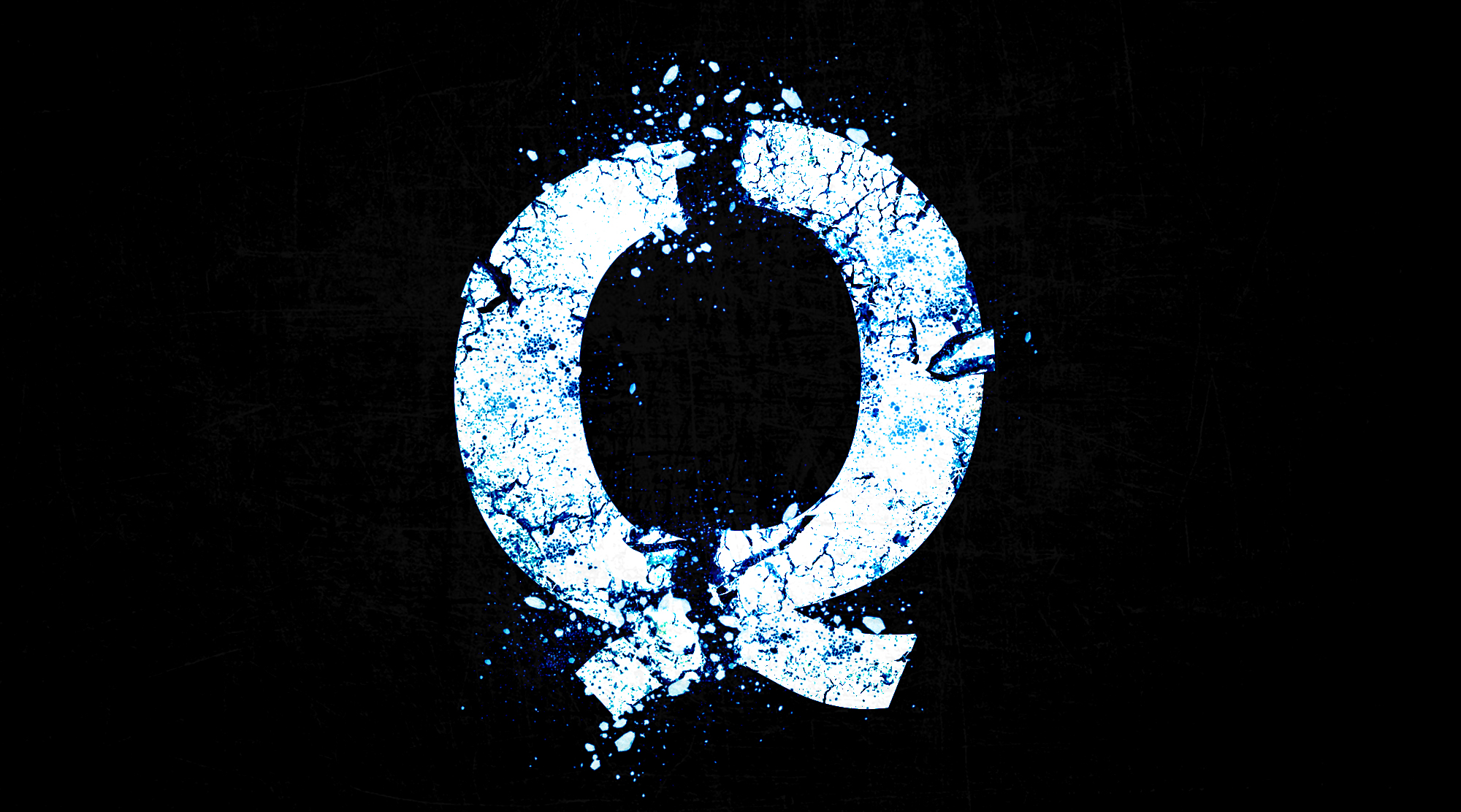 On August 22st we saw marches predominantly organized by U.S.-based Freedom For the Children happen worldwide under the “Save Our Children” banner. Though these protests may have at first glance appeared to be in support of a righteous cause—and though for many of those who were marching they actually were—the cause itself had been overshadowed by conspiratorial beliefs espoused by the events' organizers and administrators long before the marches even took place.

As we have noted through our previous investigations, these rallies represented the culmination in the evolution of QAnon’s online presence to both swell ranks and disguise the movement from more stringent crackdowns by major platforms. The organizing hashtags—#SaveTheChildren and subsequently #SaveOurChildren—served as both a dogwhistle call to arms for Q followers, who believe that children need to be saved from a cannibalistic Satan-worshipping paedophile elite rather than the genuine child sex trade, and a way to find a whole new audience in concerned parents on Facebook, where QAnon theories and hashtags tend to spread through wellness groups with impunity.

Despite efforts from anti-disinformation investigators (both our and NBC’s reports were published prior to events), reports on the worldwide marches were generally positive, with many news outlets ignoring the QAnon roots of the march and instead predominantly reporting on a collective coming together against child sex trafficking. In Utah, however, the attorney general cancelled the march after our report was published.

Our own intrepid Edie Miller attended the Newcastle march organized by Freedom For the Children. What she found was a crowd that could predominantly be described as ‘concerned working-class parents’ who genuinely thought they were marching for a good cause. When asked about the event, police said “we estimate about a 100 to a 150 people are present, it’s all been very peaceful, there were some quite emotive speeches but no trouble.” However, the pervasiveness of QAnon can be seen in the pictures she took of the event: 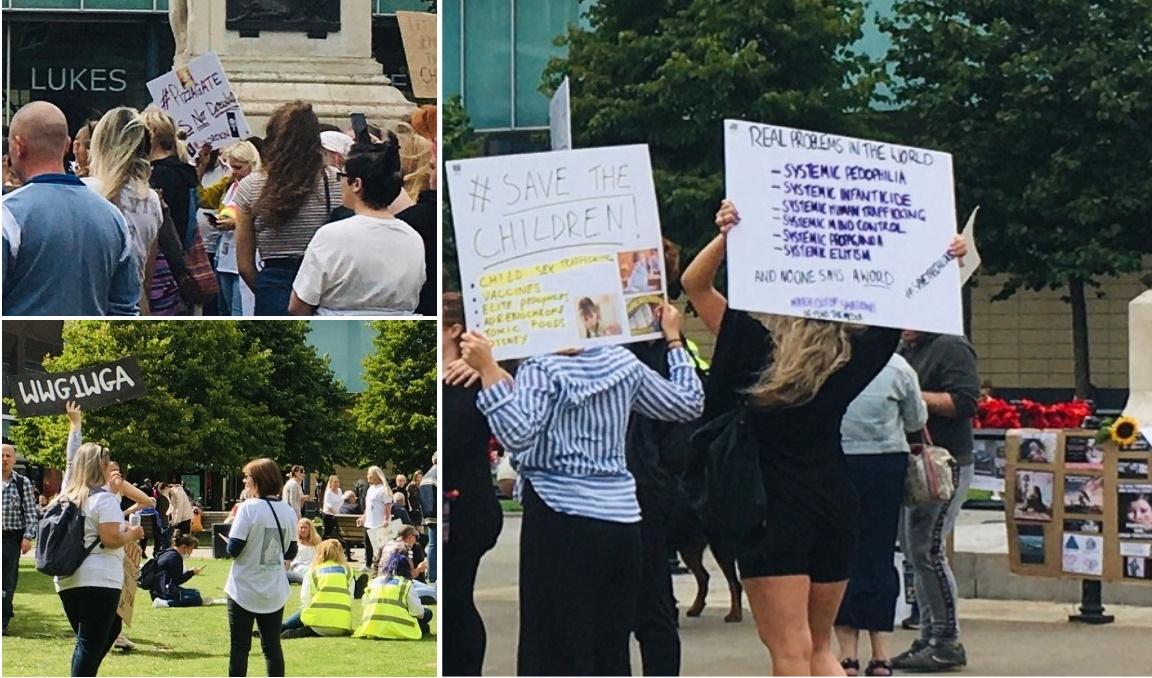 Other marches in the U.K. were not so civil. A march in London ended with droves of people chanting “paedo” at the gates of Buckingham Palace (the lead photo in the article linked clearly shows a poster with #pizzagate and #adrenochrome on it). In Nottingham, a parallel march unaffiliated with Freedom For the Children, drew crowds of army veterans and faces from the UK Far-Right in a confused message that nevertheless leaned heavily on QAnon talking points. The scenes in Portland were more dramatic still, where Black Lives Matter and Antifa protestors staged a counter-march to a Save the Children event attended by an amalgam of Proud Boys and Far-Right groups. Even here, QAnon phrases were clear and present in the crowd.

However, what should have been hailed as the beginning of ‘The Great Awakening’ (the time when Trump’s master plan to beat the satanic cabal is revealed and those who don’t follow Q finally wake up), especially in the wake of Trump’s perceived endorsement of the movement, has instead caused a rift in the QAnon Qmmunity (sorry).

The leadup to the split into QAnon and qAnon

The reason for this schism is because of the groups organizing and attending these marches, but the tension has been building since countries began implementing lockdowns, leading more people to go online to find explanations to 2020’s bizarre plotline and intensifying the bond users have to their online communities. This led to a glut of conspiracies to explain the pandemic, from bioweapons to 5G to Big Pharma cover-up, and inevitably, in 2020, all conspiracies lead to Q.

As Ben Collins of NBC reports, QAnon’s ranks swelled during the first half of the year, and its new members weren’t your typical Chan-frequenting, Trump-loving, Democrat-hating patriots. Instead, these were often mothers, concerned parents, and average frequenters of “wellness communities, religious groups and new-age groups on Facebook, Twitter and Instagram.”

As we have previously explained, groups focussing on ‘alternative’ forms of knowledge often act as gateways to more extreme fringe beliefs. With non-Q disinformation events such as the Plandemic viral video and the Wayfair child trafficking conspiracy also inhabiting alternative medicine, anti-vaxx, and new-age groups, and QAnon often folding these events into its narrative in a retrospective way, it is no surprise that Q found eager new followers. We are dubbing these new followers qAnon, or ‘Lowercase q’ to distinguish them from pre-COVID followers (QAnon, or ‘Uppercase Q’).

QAnon videos and ideas making their way into new venues (predominantly Facebook and Twitter) is only half the story, though. This move was also accompanied by a pseudo-sanitation of QAnon’s rabidly pro-Trump stance. Some of the more salient aspects of QAnon lore began to gain traction, such as the ‘Deep State’ or the global elite paedophile ring harvesting kids for adrenochrome, began to gain traction in the aforementioned groups without the caveat that Donald Trump would be saving the world – while also offering explanations to events such as Jeffrey Epstein’s suicide (and involvement with elites). The name QAnon and hashtags such as #WWG1WGA were present and widely used in these groups – thus acting as the bridge to genuine QAnon groups and exposing users to the full QAnon narrative and community.

The key event leading to the marches on the August 22nd is Facebook and Twitter implementing filters and bans on QAnon associated hashtags. In response, QAnon groups began to rally around #SaveTheChildren as a reference to Trump’s mission against the cabal. From here, the merging of genuine anti-child trafficking groups and qAnon adherents was all but guaranteed.

One would think that a groundswell of new members, active and eager to bring QAnon’s message to the world through demonstrations would be a welcome development. Earlier real-world Q activism has largely consisted of gun violence or kidnapping, so a more PR friendly and accessible movement to ‘wake up the world’ and bring them on side should be fantastic, right?

Apparently not. The Q narrative’s malleability with other groups means the labyrinthine-yet-controlled narrative constructed on 8kun and by ‘bakers’ (Q post interpreters) has fragmented into a complex and sometimes contradictory mess of paranoia. After Trump’s endorsement, some QAnon members warned of expected ‘false flag’ events to discredit QAnon (though the aforementioned events were arguably just fine).

The clashes in Portland were, arguably, all the proof needed that the ‘Deep State’ were out to discredit the movement: 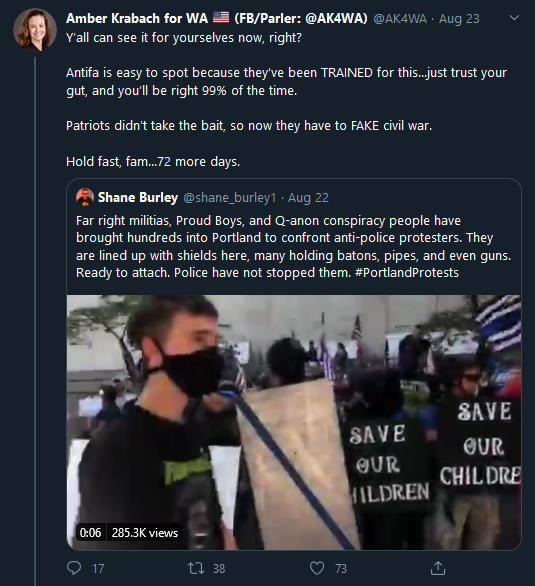 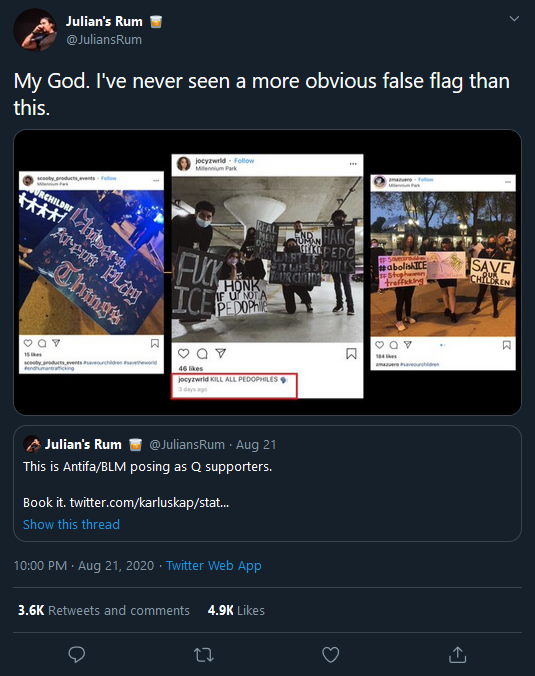 The first three of these points indicate that QAnon has lost control of the narrative. While wearing black at a march is nothing new, since Q believes that AntiFa is a ‘Deep State asset’, wearing similar clothes to them would be a no-go. The second point illustrates how genuine child trafficking concerns meld with the Q worldview as the qAnon community embraces the narrative. ICE has infamously lost track of a significant number of immigrant children, yet QAnon in its pro-Trump form views the DHS and ICE as Trump-controlled outfits. The abolishment of ICE, then, is proof of a false flag. 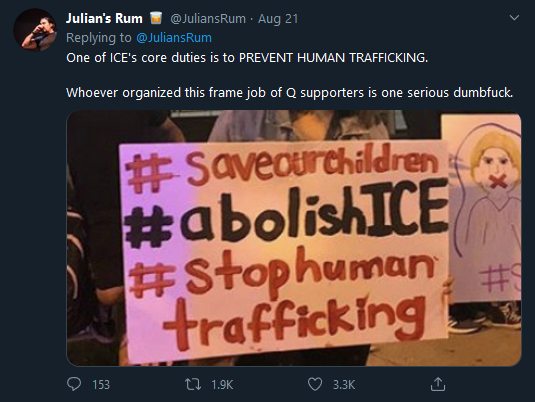 Finally, the lack of MAGA or pro-Trump headwear and paraphernalia is indicative of how, through Facebook and Instagram, the initial pro-Trump sentiment of Q has been diluted while the narrative around The Cabal and the Deep State emphasized. Though the followers of qAnon certainly look favourably on Trump (“God Bless Donald Trump” banners were present in Nottingham), displaying his merch is no longer part of the uniform. 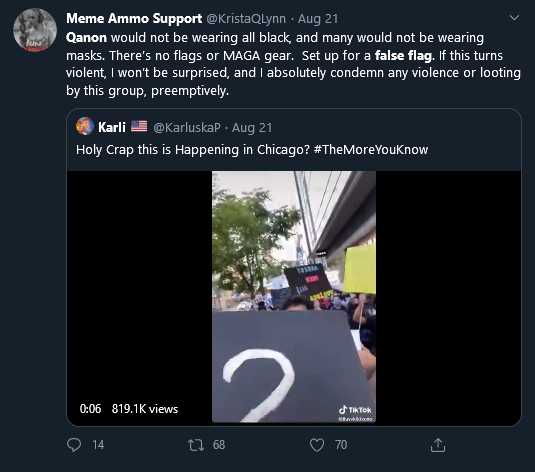 Finally, the ‘O’ on the shield in Portland. According to QAnon, a spiral is indicative of paedophile codes (a hangover from proto-Q Pizzagate discourse). With QAnon’s mantra that “symbolism will be their downfall” (they being the Deep State and Cabal), a spiral in the ‘O’ can only mean that the Deep State is openly mocking the movement. 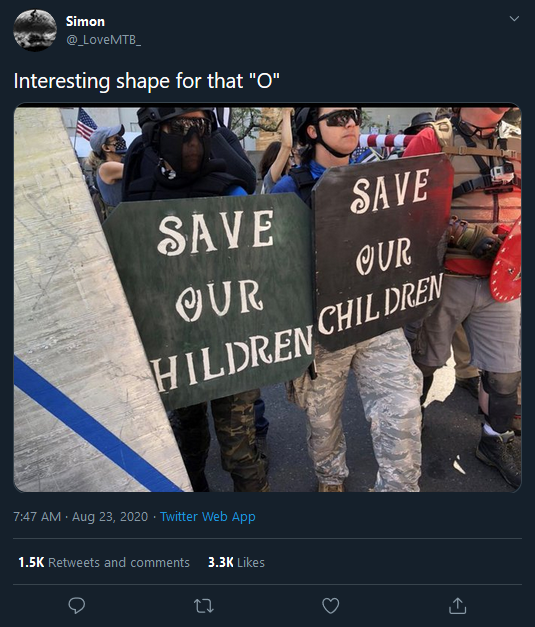 QAnon’s paranoia that their new fellow followers in qAnon are Deep State agents is further bolstered by an old post by Q himself, in which he states there should be “no outside communications”. Far from meaning that whoever posted as Q wanted discussion to remain on the 8kun messageboards, Q interpreters have decided this also means no literal outside communications, meaning that Q wouldn’t march or campaign in off the Internet. Of course, the aforementioned kidnappings, gun violence, and the abundance of ‘Q’ symbols at Trump rallies are entirely separate. 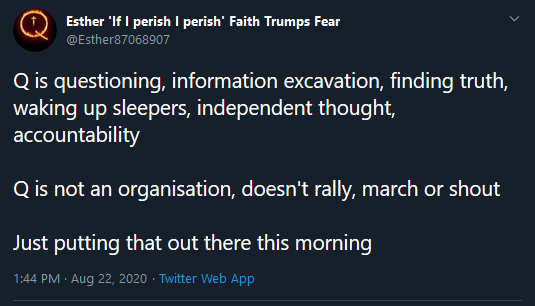 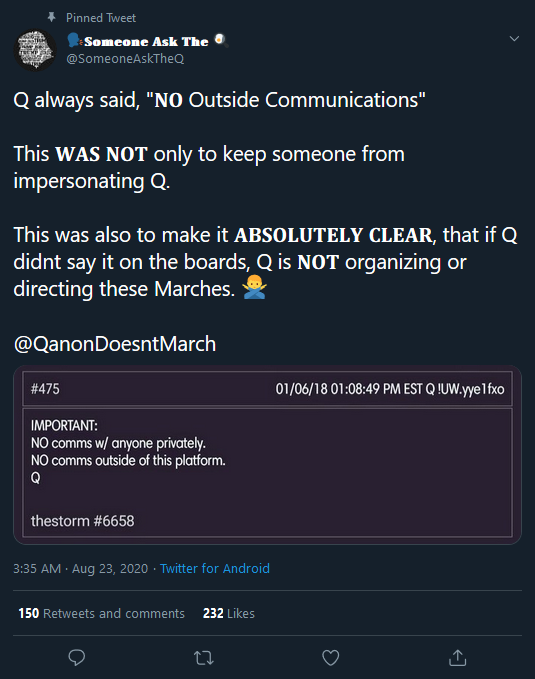 Of course, this may also be down to QAnon followers no longer having full control of the narrative. Pre-COVID QAnon was structured in such a way that Q’s deliberately cryptic posts were deciphered by ‘researchers’ who would post videos and disseminate their information to the wider community, who would then read it into a whole host of real-world events. The Patreons of some of these researchers are remarkably lucrative, as were accompanying merchandizing efforts.

With qAnon concerned less with Q’s posts themselves and instead the issues (or plot points) the narrative says are the cause of society’s ills, these figures are losing a new audience. In a remarkably popular Twitter thread, QAnon follower Jordan Sather states quite clearly that there should be more “Q swag” – the new qAnon blood are more focussed on tackling the problems that QAnon points to than declaring their fandom. 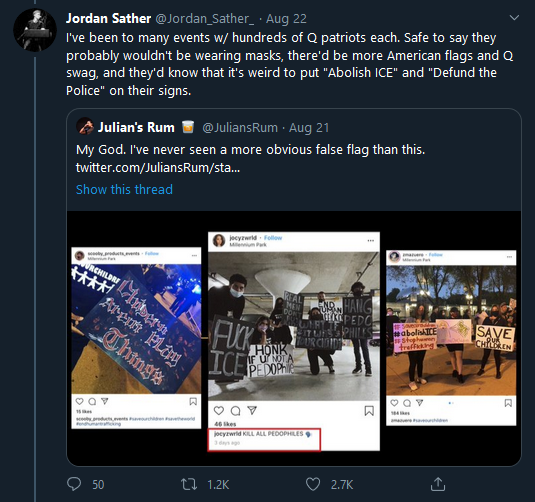 What happens next remains to be seen. However, it is fair to speculate that the Uppercase Q community will continue to distance themselves from the Lowercase q community’s efforts at marching as real-world clashes become an inevitability, calling them false flags and discrediting efforts. Despite calling for a storm and a great awakening, the older QAnon supporters seem far more content as Internet sleuths and video editors. The new post-COVID qAnon group, however, may cause even more of a concern for anti-disinformation efforts as their less-rigid adherence to Q lore means a more adaptable, visible, and worryingly, recruitable form of conspiracy participation.

Snacking on public transport could be banned

Snacking on public transport could be banned in an attempt to reduce childhood obesity.