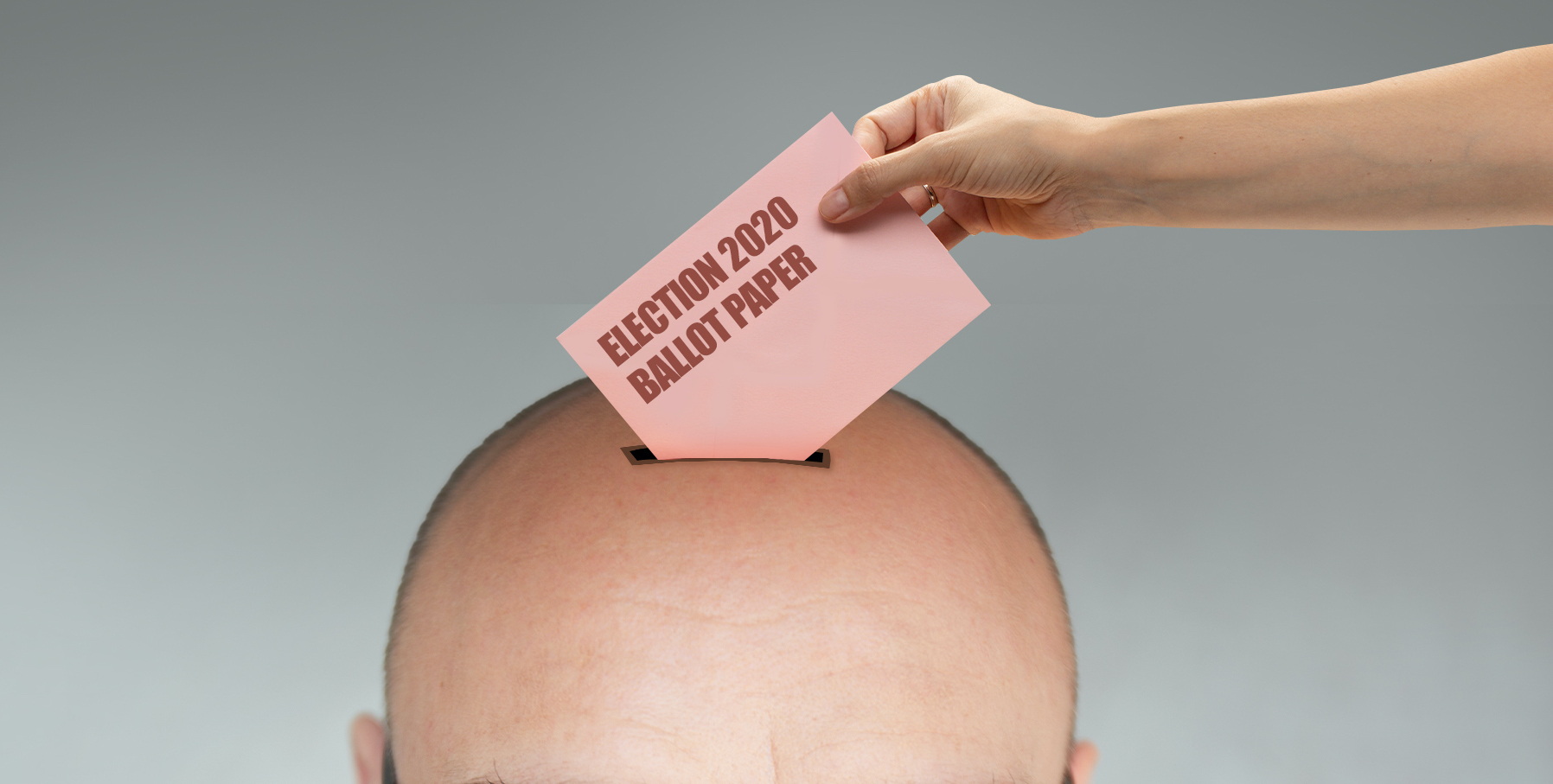 Trump’s existence as a political phenomenon began with him descending a golden escalator in a tower named after himself. It ended—at least for now—with one of the stars of "Borat Subsequent Moviefilm" holding a press conference in a garden center parking lot next to an adult bookstore.

This election was far from the comprehensive defeat of far-right populism many were hoping for and, in many ways, it has given Trump a handy platform from which to run for re-election in 2024. But it did at least provide us with one of the funniest things that has ever happened in human history. After a week spent in sleep-deprived limbo, the Four Seasons Total Landscaping incident unfolded like a fever dream: Trump’s defeat was announced while his entourage occupied some zone of pure perfect reality where history aligns with metaphor and everything else breaks down. I can only imagine that being there was like being Philip K. Dick in "VALIS", you probably could have seen time melt away and were able to bear witness to the crucifixion of Christ.

Who knows, at this point, why Biden won. Right now, it feels like no one really knows anything. What analysis I have seen is mostly just people grasping at any explanation that fits their pre-existing ideas about how the world is, or how they’d like it to be—same as it ever was, I suppose. Even Biden himself seems to be doing this (or at any rate, his minders are): incorporating anti-Trump Republicans like Cindy McCain into his transition team, despite evidence that their contribution to his victory was marginal at best (a higher percentage of Republican-identified voters plumped for Trump this time than they did in 2016). A face-off with "The Squad" awaits.

But then the circumstances under which it might make sense to form considered ideas about something as huge and chaotic as a United States Presidential Election do not yet really exist. Our experience of the election is filtered through the reporting and analysis of journalists shunted like candidates from "The Apprentice", filming each task back-to-back on three hours sleep, from one urgent new half-development to the next. From Tuesday to Friday, as events ground slowly through the turgid muds of limbo, it became increasingly obvious that the anchors on CNN and MSNBC may in fact never sleep, that they might genuinely be capable of giving subtly different variations of the same information, indefinitely, until Steve Kornacki finally ended up dying, like Branwell Brontë, standing up.

Everyone is tired, and no one is afforded the sort of space and distance from events in which real thought might occur. But this is no time to let oneself drift off. The settlement must be claimed, the narrative must be sculpted: now is the time to set everything in stone. This was the election where moderation won, or it wasn’t; this was an election that was stolen from Trump, or it wasn’t. This was a testament to the resilience of American democracy, or this was the global hegemon’s last chance to not condemn the world to a rapidly accelerating doom. Last time around, we got ‘post-truth’ and Russiagate. After Obama’s first win, we got the Tea Party. Who knows what everyone in America will end up fixated on for the next four years this time around?

If anything seems clear, it is this: we need to change how we experience electoral politics – urgently. My own abiding memory of the election results, Four Seasons Total Landscaping aside, is this: waking up at two a.m., desperate for more sleep, but feeling compelled to check my phone to see if Florida had been called yet. This turned out to be a terrible mistake. Nothing significant had yet been reported—but already on Twitter, a great nebulous chorus of doom was ringing out: Biden was doing badly. It seemed 2016 was in the process of repeating itself. I spent the rest of the night trying and failing to sleep, mentally charting various Trump or Biden "paths" to victory as if I was playing the worst and most stressful computer game ever written, forced by some flaw deep within me to check my imaginings against the curiously addictive graphics of the New York Times website every ten or twenty minutes. I found myself longing, if you can imagine such a thing, for the good old British model, where all the results are dumped at once at ten p.m with the exit poll and the only real uncertainty surrounds which way ten or twenty-odd marginal seats will swing. More than anything else, I wanted it to stop: I wanted someone to hit me over the head, to wake me up when a result was certain. I spent the whole of Wednesday too tired to do anything more substantial than checking social media desperate for news. By Thursday, I had spiraled into a profound depression.

Perhaps there is nothing even remotely universal about this. Perhaps this is only proof that I am suffering from some sort of deep personality defect that leaves me unable to feel relaxed about which of the two most likely terrible candidates for the highest office in a country I neither live in, nor am from, ends up winning. But from what I’ve seen, I doubt I am in any way unique. Indeed, one major social media trend was a wave of Americans tweeting their frustration that people from other countries cared so much about their election—as if being really into American politics is an affectation analogous to being really into American sports. Obviously I’m sure for some people it is also that. "The West Wing" has done the world a great deal of psychological damage. But just speaking from my own perspective, it should be unsurprising that I care, since thanks to social media I have so many American friends; since thanks to the work I do have direct material and professional interests bound up in the country’s future. This is just what globalization means when you’re the global hegemon, lads.

At any rate though, the point I’m trying to make here extends beyond anything specific about the U.S. Should the democratic process really always hit us like Brenda in Bristol as voxpopped in 2017 by the BBC, howling: “You’re joking! Not another one!?" Should witnessing democracy in action always feel like watching a car crash in slow motion? Ideally, electoral democracy should be something informed citizens can participate in. But nowadays, at least, it only really feels like a sort of horrible imposition. The presence of the election disrupts and dominates, everything else around it—it becomes impossible to proceed as normal.

Much has been said over the past four years about democracy being undermined by conspiratorialism —but what about the possibility of anti-democratic attitudes being fostered by exhaustion? “If Hillary had won, we’d be at brunch by now” is the anti-politics slogan of the so-called "Resistance" that is rapidly becoming: “Well, Biden won, so everything’s fine now.”

So what might be the solution? I don’t know. I don’t know. Clearly, this is a problem that was created by 24-hour news and social media, in much the same way as those forces created the character of "Donald Trump" in the first place. But we can’t simply eliminate those things, and by their very nature, when there is information, it will in some sense filter out on them.

In my dreams, experiencing an election might become like applying for a job, where you don’t hear anything until you’ve got the interview or not. You have an idea that maybe the process has reached some sort of conclusion, but don’t know when exactly you’ll be hearing until the news just suddenly appears in your email inbox one day (or, you know, it doesn’t, and then I suppose you just eventually conclude there won’t be any good news at all). But this too is a deeply anti-democratic attitude: resignation to the notion that participating in the process in any way could only be painful and bad.

As I say, I’m not sure, but maybe that’s OK for now. Some problems can only be solved tomorrow morning. It’s time to go to bed.

Tom Whyman is a philosopher and writer. He has a fortnightly column addressing the news, and how to live with it.