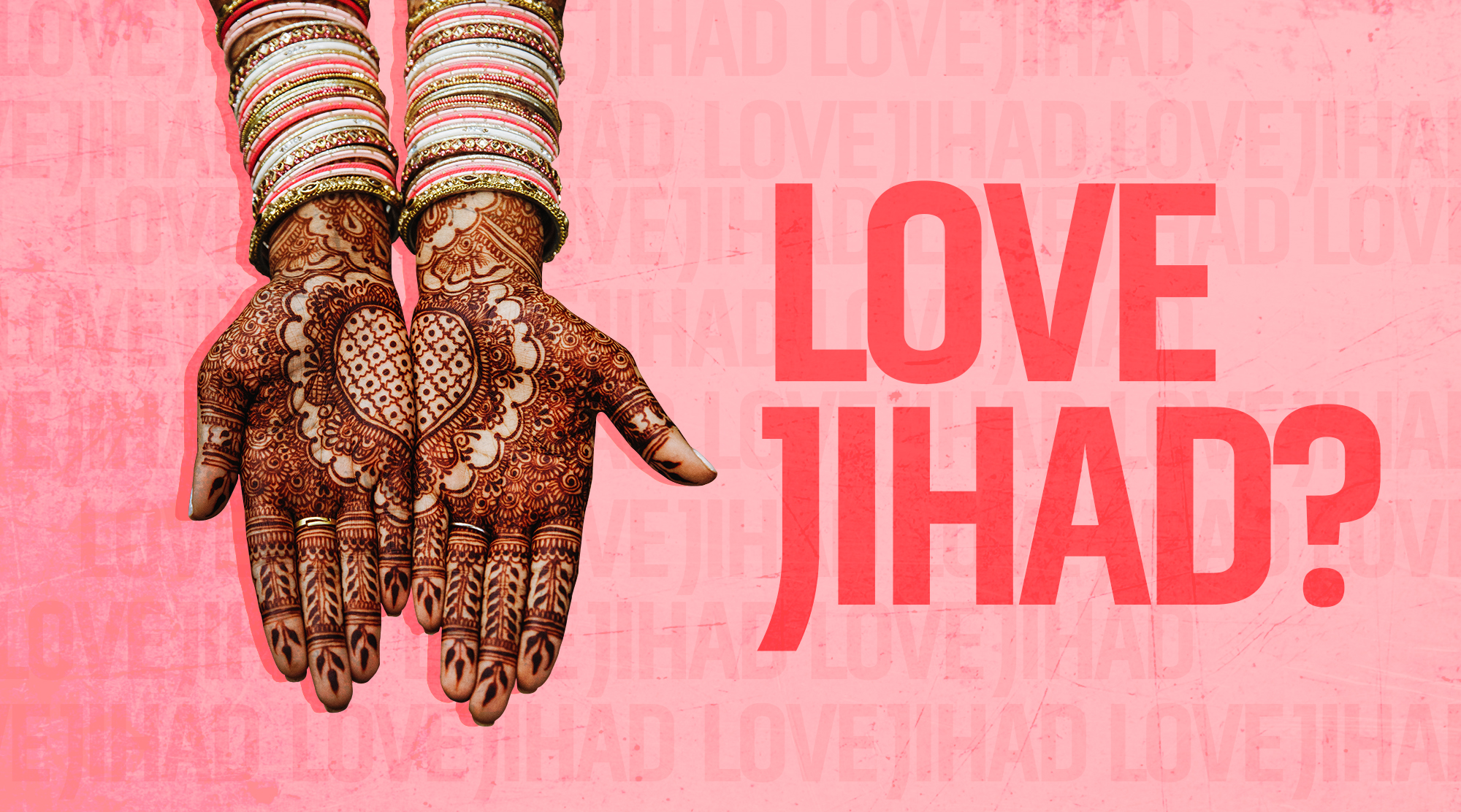 Conspiracy theorists love a catchy and emotive catch phrase, and “love jihad” is no exception. For the uninitiated, love jihad is a far-right conspiracy theory that was first floated by Hindutva groups in the south Indian states of Kerala and Karnataka. The theory is based on the idea that Muslim men intend to entrap Hindu women by feigning love and then forcing them into marriage, solely to convert them to Islam. Though the term love jihad itself is recent, the idea can be traced back to the 1920s. According to historian Charu Gupta, the Arya Samaj printed pamphlets full of propaganda about the Hindu woman as a victim and a Muslim man as a perpetrator.

The Hindu Janajagruti (an organization for the establishment of the Hindu Rashtra) even details the plot with a step-by-step image chart on its website. Their “signature campaign” is the need for the union government to pass a law against love jihad.

Fact checkers have repeatedly debunked a photoshopped flyer, or “the love jihad rate card”, that has been making the rounds on social media. The flyer warns of this modus operandi. This pamphlet has been the discussion on prime time news on more than one occasion. 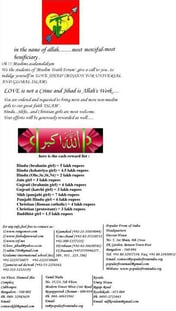 In the recent past, incidents such as the 2016 Hadiya case have drawn national attention and fueled speculation. The Hadiya case concerned a 24-year-old Kerala woman, whose marriage to a Muslim man and conversion to Islam was called into question by her parents. Hadiya’s parents alleged that she was brainwashed into conversion, and that her husband had links with extremist groups. The Kerala High Court judgment stated that “a girl aged 24 years is weak and vulnerable, capable of being exploited in many ways”. The High Court gave Hadiya's parents custody of their adult daughter. In 2018, the Supreme Court of India found that the allegations made by her parents were false and reversed the court decision that had annulled her marriage.

More recently, the shooting of a college student Nikita Tomar at point-blank range in Haryana has added to the speculation that love jihad is a rampant and growing problem. Tomar was murdered by Tauseef Ahmed, a 21-year-old Muslim man, after he had apparently proposed marriage to her on several occasions and she had refused. Tauseef’s uncle, an MLA  denied the charge of love jihad, and states that the guilty must be punished.

Despite this, in places like Western Uttar Pradesh, love jihad scaremongering has led to police investigations. Uttar Pradesh and other BJP led states such as Madhya Pradesh and Haryana have promised to enact laws to counter love jihad. On November 25, Uttar Pradesh Cabinet cleared an ordinance that makes a marriage conducted for the sole purpose of conversion null and void; those found guilty may face up to 10 years imprisonment. Government spokesperson and cabinet minister Siddharth Nath Singh stated that the decision was necessary for maintaining law and order in the state, and to ensure justice for women from scheduled castes and tribes.

A more objective look at both the Hadiya and Nikita incidents shows that Hadiya was a woman exercising her freedom as enshrined in the Indian Constitution, and Nikita was a victim of gendered and patriarchal violence. The conspiracy theorists, however, believe that those who willingly convert are brainwashed or blackmailed with sexually explicit videos and images, and those who resist conversion are raped and brutalized. Some variants of the conspiracy theory even state that women are first raped and then forced to convert. Others say that, since the Islamic State cannot defeat India, they are using love jihad as a means to make India an Islamic state.

According to The Hindu, a special investigation in Kanpur, which concluded just days after the UP government introduced the ordinance, found that 11 out of 14 instances were criminal in nature but that there was no evidence of foreign funding or organized conspiracy. The three remaining cases were of consenting adult women who married Muslims of their free will. These investigations were conducted at the behest of far-right Hindutva organizations such as the Vishva Hindu Parishad.

Why is conversion contentious?

Under the Muslim Personal Law (Shariat) Application Act 1937—a law that is derived from Sharia practices—a marriage between a Muslim and a non-Muslim is considered void ab initio or void at inception.  This is why conversion of either individual is a must under Islamic law. In comparison, to solemnize a marriage under the Hindu Marriage Act, it is sufficient for one of the parties to be Hindu.

However, the Special Marriage Act 1954 enables marriages between people of different faiths. But the procedure to solemnize this kind of marriage is complex, and requires both parties to state an intent of marriage, their parents’ addresses, phone numbers, and other personal details. This lets third parties raise objections to the marriage and gives the marriage officer the power to investigate. These procedural requirements are currently being examined by the Supreme Court of India for violating the Indian Constitutional right to privacy and freedom of marriage.

Logically spoke to Priyama Chakravarty, a Hindu woman who is dating a Muslim man, to ask her why she thinks conversion is given so much importance. “Conversion becomes important if you want acceptance from the family,” she says. “Unless the couple is really independent and doesn’t care about family approval, conversion becomes crucial. A friend’s dad converted to Christianity to marry an Anglo-Indian woman.”

The term love jihad has also been used as a slur for couples exercising their choice, Chakravarty explains. “‘Love jihad’ does infringe on personal liberty, as there is no way of establishing coercion by a Muslim boy. Any and every baseless allegation will be blown out of proportion. I think in educated families, the question of conversion does not even arise, as religion is seen as a personal choice, not as a societal expectation. And conversions happen if you are living with strict in-laws who don't have any way of coexisting as a joint family otherwise.” She adds that these challenges are not limited only to interfaith marriages: “If you take the religious aspect away, many Hindu girls marrying into the same community and faith have had to quit their jobs, transform their identities and in many cases change their name as well. That is an equal infringement of personal liberty.”

Abrahamic religions have a clearly defined procedure for conversion, but Hinduism differs as being without such process. Though there have been numerous organized sects, Hinduism has always been devoid of dogma. This is not to say that there have been no attempts to treat it like an organized religion. With the rise of right-wing ideology, these efforts have been more pronounced.

In the 1920s, the Arya Samaj believed in the “Shuddikaran” or purification ceremony to convert Christians and Muslims back to Hinduism: a term that they refer to as “Ghar Wapasi” or a return to roots. In 2014, Dharma Jagran Samanvay Vibhag and the Bajrang Dal—right-wing groups affiliated to the Rashtriya Swayamsevak Sangh (RSS), the spiritual progenitor of the BJP in Agra—fraudulently conducted a re-conversion exercise of poor Muslims by offering financial incentives.

Why does the conspiracy stick?

The love jihad conspiracy theory paints women as gullible, innocent, and incapable of exercising their free will. It also adds to paranoia that there will be a population explosion of Muslims, that there will be no country for Hindus: an idea that is very similar to the far-right conspiracy theory the Great Replacement, which purports that white Europeans will be replaced by non-European immigrants. This idea has been expressed by many white supremacist and ethno-nationalist groups, so they can justify their racial violence and hatred. The latest Indian census of 2011 states that Muslims constitute 14.2 percent of the total population. But, that was almost ten years ago, and even the smallest rise in this number will give impetus to more such disinformation.

These narratives stick thanks to aggressive online campaigns through social media, WhatsApp forwards, and political attention that aims to appease voters and secure votes. Popular culture and mass media representations of interfaith couples have drawn flak as being promoters of love jihad. A Tanishq advertisement had to be taken down and a complaint had been registered against Mira Nair’s “A Suitable boy”.

Making laws that criminalize an imaginary threat like love jihad, a conspiracy that has repeatedly been debunked, infringes on personal liberties of citizens by giving executive overreach to the state in personal matters such as marriage. According to the National Crime Records Bureau data from 2019, India records a crime rate of 62 percent against women. Many incidents of violence go unreported for various reasons such as fear of social stigma.

These disinformation campaigns paint patriarchal crimes with religious overtones, making one perpetrator of the same crime seem more heinous than the other. While there is no denying that there are religiously-motivated crimes of sexual violence or coerced conversion, a full-scale moral panic and suspicions over every marriage will be doubtless detrimental to personal liberties.

Male contraceptive pill: yes or no?

A male contraceptive pill has been in the works for almost half a century.