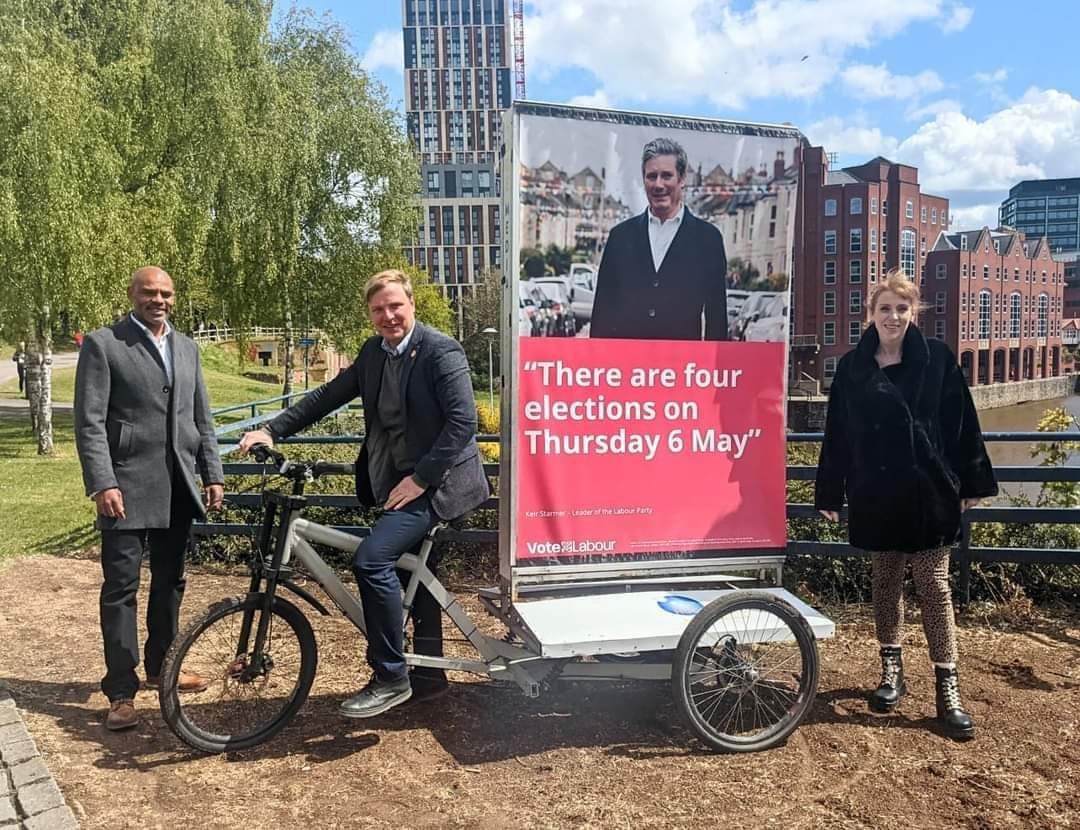 Last Thursday, when a number of elections were running simultaneously in the U.K. (there was Americanized talk of a “Super Thursday”), a picture of a poster did the rounds on social media: a group of people, one of whom was the Labour Deputy Leader Angela Rayner, latterly unpersoned, stood around a man on a bike, on the back of which was hung a poster, depicting Labour leader Keir Starmer, below whose face was what looked like a quote: “There are four elections on Thursday 6 May.” Alex Nunns, a former speechwriter for and biographer of Jeremy Corbyn, sardonically dubbed it Starmer’s most iconic line yet.

On the surface, there are two key reasons why this poster is so funny. Firstly, there is the slogan itself, which is dull almost to the point of being redundantly truistic. It reminds you, as is often the case with Starmer, of that bit in The Simpsons where Martin buys the talking Al Gore doll. “You are hearing me talk.” Starmer is now a man who stands for so little that he has been forced to go into the business of simply stating facts. And not even interesting facts, like “If Canute the Great’s sons hadn’t all died young, it is likely England would have been drawn permanently into some form of union with Denmark instead of coming under the influence of the Normans” or: “In Iceland, the gene pool is so small that dating apps routinely filter matches to assure users that they’re not accidentally hooking up with their cousins.” Boring ones. Pretty soon, you start to wonder if Starmer is going to take the stand at Prime Minister’s Questions and start reading out the instructions that came with his washing machine.

Secondly, there is the fact that someone decided to put this impossibly dull slogan in quotation marks, as if it really was something Starmer was proclaiming – perhaps indeed that he was the one responsible for making it happen, just by saying it.

I may not agree with what you have to say, but I will fight to the death for your right to say it — Voltaire.

A house divided against itself cannot stand. — Abraham Lincoln.

There are four elections on Thursday 6 May — Keir Starmer.

Here there were also echoes of the scene from The Office where Michael has the Wayne Gretzky quote written on the board behind him.

You miss 100 percent of the shots you don’t take. — Wayne Gretzky — Michael Scott.

There are four elections on Thursday 6 May — The Electoral Commission — Keir Starmer.

Who the hell decided to put it in quotation marks? Once again: graphic design is someone at the Labour party’s passion.

So it’s a dumb poster. But at least, you might think, it’s true. Surely, if Keir Starmer has printed a poster of him saying there are four elections on Thursday 6 May, there must actually have been four elections on Thursday 6 May. This, for what it’s worth, would chime with the image of Starmer that seems to have built up during the past year in the minds of voters: that he is a basically very boring man, who nevertheless has, at least, the facts right. Where Boris Johnson is always happy to spin his base a convenient fantasy, Starmer is determined to bring everything down to the grey level of mere, factual reality. Forensic opposition, and so forth.

But is it true? There were lots of elections on Thursday 6 May – so let’s count them. Elections for local councilors in England. That’s one. Elections to the Scottish parliament. Two. Elections to the Welsh parliament. Three. The much-heralded Hartlepool by-election. OK, that’s four. But then there were also thirteen mayoral elections, including in London and Greater Manchester, thirty-nine elections for police and crime commissioners, and elections to the London assembly. So, depending on whether you count “mayoral elections” and “PCC elections” as a class of election, or as whatever number of distinct electoral contests, by my count, there were somewhere between seven and fifty-nine elections in Britain on Thursday 6 May – which no matter how you spin it, is considerably more than four.

At this point, no doubt, Starmer’s allies will jump to his defense. The image was taken (as I think is clear from what’s in the background) in Bristol. And in Bristol, as it happens, there were indeed four elections on Thursday 6 May: local council elections, a police and crime commissioner election, and both city and metro area mayoral contests. So with this knowledge, I guess, we can bring Starmer’s statement back to the level of grey, truistic reality: there are four elections on Thursday 6 May, in Bristol (unless you count the ward elections as separate from the council one). You are hearing him talk.

But I think this is too easy – and really, I think, it is a move that it is only possible to make if we have forgotten what a fact actually is. Perhaps the easiest way to express this is by citing Wittgenstein. In the Tractatus Logico-Philosophicus, the sparse, gnomic early work in which he at one point believed himself to have solved all the problems of philosophy, Wittgenstein defines “the world” as “all that is the case.”

“The world,” he says, “is the totality of facts, not of things. The world is determined by the facts… The world divides into facts.” And a fact, he tells us, is a “state of affairs.” “What is the case – a fact – is the existence of a state of affairs.”

“A state of affairs (a state of things) is a combination of objects (things).” Objects, as “substance” exist “independently of what is the case.” To get to the level of facts, we need to “configure” this substance somehow: to give them form. In real terms, what this means is that there are no blank facts: there is nothing that is incontrovertibly, unquestionably true. If something is true, then it could always possibly be false. Some things look like they might be incontrovertibly true, for instance, a statement like “all bachelors are unmarried.” But for Wittgenstein, this sort of statement isn’t actually true – it’s just truistic. Facts say something about how things are in the world, where truisms only say something about themselves: little metaphysical Pokémon, endlessly chanting their own name. In this sense then, all facts involve an element of contextual judgment. As Wittgenstein writes later on in the Tractatus: “A picture is a fact… A picture depicts reality by representing a possibility of existence and non-existence of states of affairs.” If something is the case, it also might not be so.

“There are four elections on Thursday 6 May” is a fact in exactly this way. If we restrict its scope to Bristol (and possibly certain other areas of the country), then the statement pictures something true. But of course: there is nothing inherent to the statement which delineates that its boundaries stop where Bristol’s do. The poster, which does not mention Bristol at all, simply depicts the leader of the U.K. Labour Party, Keir Starmer, apparently telling everyone that there are four elections on Thursday 6 May. As soon as you display the poster in any other context (for instance: by sharing it online), it ceases to be factually true. Keir Starmer was lying to you.

And this goes to the heart, I think, of a certain delusion held by the sort of “sensible” centrism that Starmer and his sort represent. The sensible centrist is someone who wants truth as the unfussily hungry person might want a burger: as easily, and as immediately, as possible. They see reality in restricted, often quite simplistic terms, and smugly believe that if other people were simply exposed to it, then they would obviously agree with them about how things are (this is why the problem is always Russian meddling or hard-left trolls, or something like this: the only real reason anyone might disagree with them is for maliciously ideological reasons, or if they have been somehow deceived).

In the wake of the “Super Thursday” results (which were largely devastating for Labour) this BBC News clip of a reporter interviewing some “traditional Labour voters” in Hartlepool was widely shared, in large part for the reason that the people in it blamed Labour for things like cuts to the local hospital, as the reporter nodded silently along (the clip follows a pretty established formula for how the BBC tend to cover embarrassing heartlands defeats for Labour). The cuts the men in the clip are talking about happened under the Conservative-led coalition government, as a result of austerity measures imposed by the Conservative Chancellor George Osborne. So a lot of people responded to seeing the clip by assuming that what the men were saying must just be blankly wrong, accusing them of being stupid. But just as with the Starmer election quote poster, local context matters here. On one level, the men are complaining about the fact that while their town has habitually voted Labour (tending to return Labour-led councils, and electing a Labour MP in every contest – until last Thursday – since 1964), the party has not really seemed to care about them, failing to make it seem as if their elected representatives are really on their side (the Tories might have imposed the cuts, but the Labour council acquiesced in them). And on another level, the men are clearly specifically complaining about Dr. Paul Williams, Labour’s defeated candidate in the by-election, who was himself directly involved in imposing the cuts to Hartlepool’s hospital, as reported by the Hartlepool Mail. If just anyone blamed Labour rather than the Tories for the cuts to their hospital, this might well be nonsense – but in this case, it seems at any rate like it’s up for debate.

Truth is not something immediate and obvious that can be held incontrovertibly. It is an achievement, which is sustained within a social and historical context in which things can always change. In a much later work, On Certainty, Wittgenstein gives us the image of a river with its running water, which flows over – is contained by – the hard rock of the riverbed. The water runs fast, and as it does so, very gradually, over time, it causes the bedrock to erode and shift. Some facts are like the water, the implication is – empirically fluid, and easy to revise. Others are harder, like the bedrock: a lot rides on them, and they would take a long time to shift. But in principle, anything might be revised.

The lesson of Keir Starmer’s four elections poster, I think, is this: there is nothing dull enough to be so uncontroversial that one might found a "sensible" politics on it. In merely stating the facts, one always inevitably offers something more: a view of the world, no matter how small and restricted this view might be. The performatively "sensible" politician is just someone who has failed to realize that people are in general much more likely to vote for them if this worldview happens to be in any way inspiring.