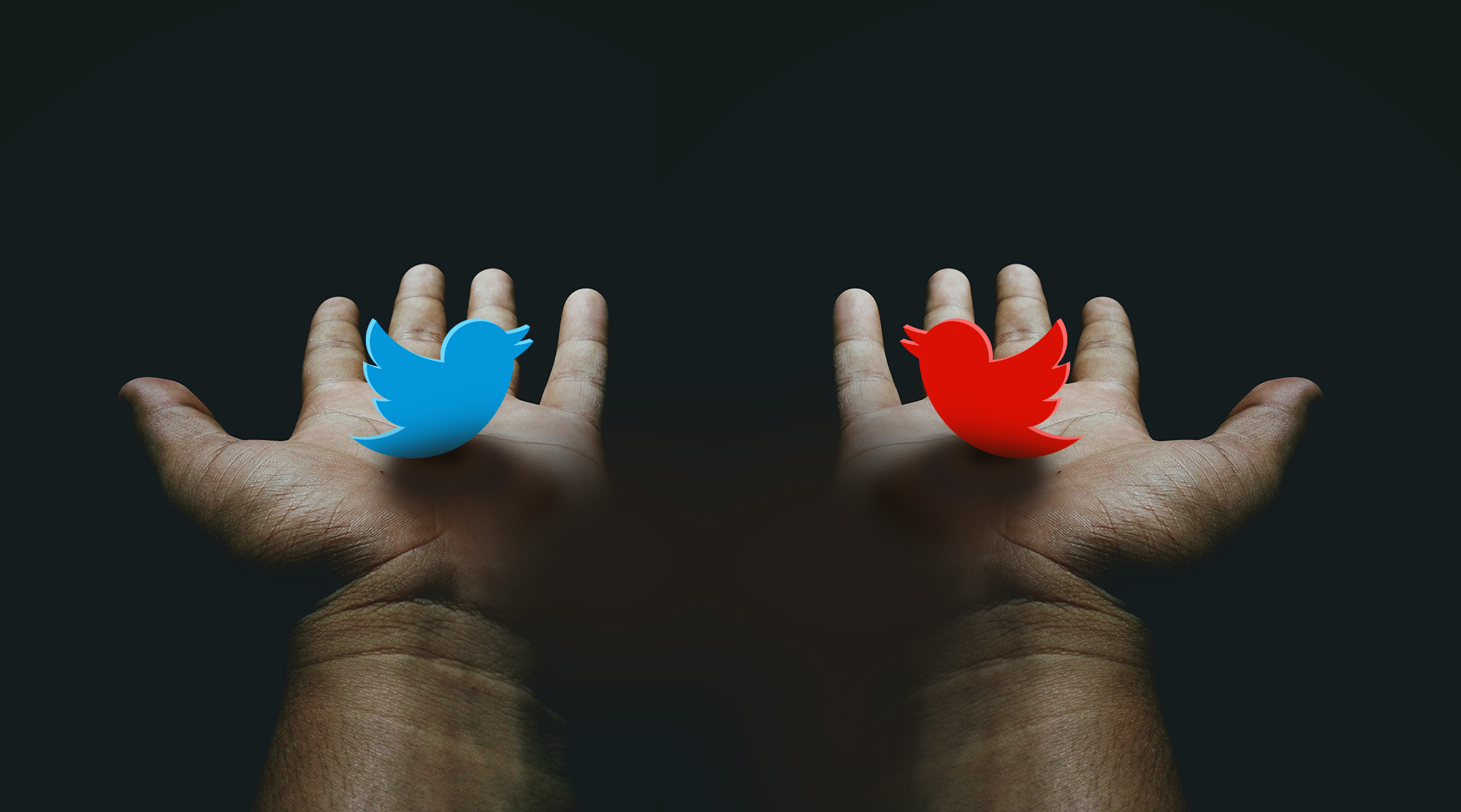 Is Twitter real life? This has become one of the perennial questions of social media. Indeed, it often seems as if prominent Twitter users enjoy nothing more than reminding the people they spend their lives, both professional and personal, interacting with that this is all just a stupid game, that in fact nothing they think could ever possibly matter – because they are saying it on Twitter, and everyone else, in the “real” world, sees everything completely differently.

And on a certain level, you know what: they have a point. From Trump to Brexit to the big Conservative landslide in the last U.K. general election – whenever anything happens in politics in the developed world, it seems to go the opposite way to how you would assume, based on how a simple majority would seem to want it to go, on Twitter.

The other day, I came across a version of this argument (naturally, on the social networking platform Twitter). A blue-checked user named Justin Taylor had produced a graph based on statistics shared by another blue-checked user named Sam Amico which purported to demonstrate the minuscule percentage of Americans – 3.36 percent, apparently – who are actually active on Twitter. The rationale behind the graph was that only 7 percent of Americans have a Twitter account – and of them, 52 percent never tweet. This leaves just under 3.5 percent of Americans using Twitter. Ergo, Twitter is “not real life.” QED.

But let’s dig a little deeper. The study Amico got the 7 percent and 52 percent from 2010 data – meaning that the figures are over a decade out of date! The 52 percent stat is also slightly wrong because the figure given in the study is 53 percent – and the study also clarifies that even if this 53 percent of users aren’t actually tweeting, many are still given to lurk. You may as well try to prove that no one uses trains based on statistics from the 1810s.

Confusingly, Amico also linked a more recent study, in which his 7 percent stat is directly contradicted. Usage data from a January 2021 study by the digital marketing agency Omnicore suggests that 22 percent of U.S. adults have a Twitter account, with 42 percent of those users engaging with the platform daily.

At any rate, the number of Americans using Twitter does appear to be much higher than 3.5 percent. That said, the community of Twitter users may well be unrepresentative in other ways: according to the 2021 stats, 80 percent of Twitter users are “affluent millennials” (I don’t know exactly what this means, but it’s what the study claims). And 77 percent of Americans who earn more than $75,000 a year use Twitter.

Who knows how reliable any of this data actually is. But these stats do at least appear to tally, in some way, with what I assume is the direct experience most people have of Twitter. Twitter is a platform in which younger, more educated, and often more affluent voices generally dominate, with discourse driven by a small core of especially prominent users, the bulk of whom work in the media. This helps skew the range of views that are represented on the platform – as does the way that the dynamics of the site work, where more extreme views are quoted by other users who disagree with them to “dunk” on.

People gawped with queasy fascination at the idea that someone might fall in love over the internet with another person they had never even seen; they huffed skeptically at the idea that anyone might prefer to shop online.

These dynamics at once incentivize the expression of extreme views, and help to police them: some people are more likely to say provocative things because they know it will generate engagement (probably the most successful user at doing this was Donald Trump); perhaps more demur from doing so because they’re worried about getting “piled on.” If you use Twitter a lot, you start to become very aware of lots of little problems with how you use language, in ways various groups of people might object to. But you also become aware of some extraordinarily wild things that other people believe (and indeed: appear to have been led to believe by engaging too much with the internet): from everyone under 5’7” is minor coded and thus being attracted to them is a form of pedophilia to I’m happy a toddler was eaten by an alligator because I’m sick of white men and their blasé attitude towards signs.

There is a serious philosophical issue here. We are used to assuming a hard distinction between “online” and “IRL.” In many ways, this distinction has its folk origins in the early days of the internet, when usage was much less widespread: “cyberspace” was represented in a lot of media as being somehow unfathomably Other, with “logging on” a break with the ordinary, physical, and everyday. This way of representing the internet reached its artistic height in the classic anime Serial Experiments Lain, where the internet – there called “the Wired” – is depicted as an utterly transcendent space able to exercise a transformative effect on human nature, bringing the species somehow closer to God. Once upon a time, people gawped with queasy fascination at the idea that someone might fall in love over the internet with another person they had never even seen; they huffed skeptically at the idea that anyone might prefer to shop online.

But nowadays, any hard distinction between ordinary and online space is mostly unsustainable. People – or at any rate, people in the developed world – do not exist distinct from the internet at any point: our IRL lives are irreducibly intertwined with it. Smartphones are a pretty much essential piece of infrastructure: people rely on them not only to remain in contact with other people but to navigate their way around the world outside their homes – whether by checking their maps app or by scanning a QR code to check in to a COVID-restricted bar. The internet is always with us – and of course that means that social media as well. One might typically interact with different people online than one does IRL, but that does not mean those relationships are diminished in quality of importance (quite the opposite, indeed). And of course, many of our relationships are conducted across both spaces. In short: there is no hard-and-fast distinction between the internet and IRL. You may as well decide that there is some sort of unbridgeable divide between life when you’re reading books and life when you’re not, or when you’re driving or not driving a car.

All of this means that the people on Twitter are not just a bunch of extremely online freaks whose dopamine signals have been re-wired to only get pleasure from retweets. They are also real people – their online existence intersects with their offline one, and the two exercise at least some sort of causal effect on one another. A good example of this would be the way in which left-wing internet users inspired by Bernie Sanders in the U.S. — or Jeremy Corbyn in the U.K — used the platform to help organize canvassing or voter registration efforts that took place on the doorstep or on the streets One could also cite what is often thought of as the original example of a ‘digital revolution’ – the Arab Spring.

What people say on Twitter also drives our politics in other ways. Big Twitter controversies generate news articles, which may in turn produce opinion pieces – both of which might also be consumed by people who barely engage with the platform themselves (arguably a similar dynamic was at work between 8Chan, which Q drops, and the Q aggregators that allowed people to engage with Q conspiracies without being swamped by everything else on 8Chan – most obviously child porn). Call this “passive social media consumption” – just as passive smoke can give you lung cancer, so passive social media consumption can give you online brain poisoning.

Twitter, in particular, is often discussed in the media as a sort of threat: the woke hate mobs on Twitter who are driving a cancel culture which will soon see you arrested just for saying that you’re English in your own home. There is a hauntological element to all this: a specter is haunting people in the home counties who only use Facebook, the specter of Twitter users. This ghost has typically been witnessed by prominent people such as newspaper columnists who do spend all their time on Twitter being dunked on: when they write about social media, the threat is extended to the silent majority of people who don’t use it. And this ghost has real effects on the level of policy: the U.K. government has recently been said to be waging a war on woke, informing for instance the controversial police reform bill.

There is no hard-and-fast distinction between the internet and IRL. People who post on Twitter (or any social media platform, really) represent a specific, restricted, by nevertheless real section of the general population. Views expressed on Twitter thus diverge from those held by the public as a whole – which is a big part of why it can be useful for people in power (who rely on different constituencies) to talk about social media as if it is not quite real, in order to other those views, to give them a kind of diminished reality. Social media is a part of real life. And you should be suspicious of anyone who wants to pretend otherwise.

When it comes to coronavirus, there are two big conspiracy theories. The first – which is beginning to cross over from the realms of conspiracy to become official US policy, endorsed by Donald Trump and Mike Pompeo – is that COVID-19 originated...

On December 13, 2019, the Dravida Munnetra Kazhagam (DMK) and the Bharatiya Janata Party (BJP) argued in Lok Sabha about the origins of the Tamil and Sanskrit languages. While moving the Central Sanskrit Universities Bill 2019 for passage,...