Into the Crucible of Anger: The QAnon Mindset, Facebook “Paedo-Hunters”, and the UK Far-Right 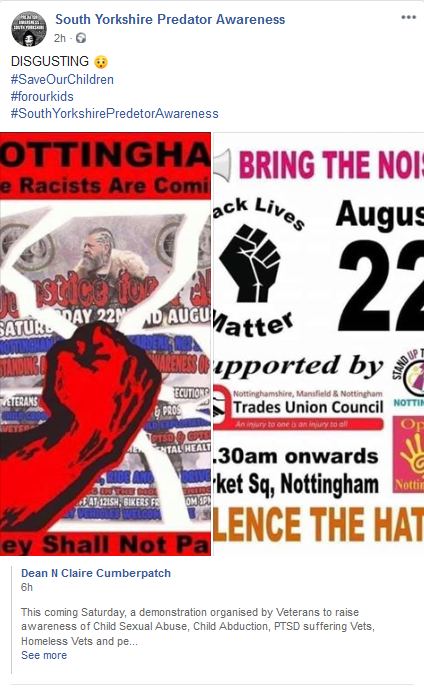 Logically can reveal that a planned march taking place in Nottingham, UK shows how the QAnon worldview has been adopted by vigilante paedophile hunter groups and prominent figures in far right organisations outside of the USA, and how the QAnon conspiracy threatens to cross international boundaries in the near future.

Following the wide implementation of lockdown measures to control the spread of COVID-19, inevitably leading more people online, QAnon emerged as a unifying conspiracy theory of everything. QAnon’s theory of ‘The Cabal’ – the group of elites controlling the world who also happen to be satanic paedophiles – has reached the level of received wisdom among that community. Now, as the movement is spilling out of its social media silos into mainstream thought, its worldview is being accepted and adopted by those who want to make a difference to save the children they think are under threat from cannibalistic elites.

The explosion of hashtags across such as #savethechildren across social media platforms are driven by the QAnon community under the belief that ‘The Cabal’ needs media attention to expose it. We have previously reported on how QAnon has affiliated itself with US-based activist groups and marches under the banner of “Freedom for the Children” and ending child sex trafficking, with QAnon theories being espoused freely in those groups.

Vigilante paedophile hunter groups have been around in the UK for decades. In recent years, they have formed a strong network of private groups on Facebook. Though there is debate around the effectiveness of these groups in bringing sex offenders to justice, they have developed a reluctant symbiotic relationship with UK police.

Given their first-hand experience of the behaviour of paedophiles and reality of child sexual exploitation, one would expect that a far-fetched theory about ritual child sacrifice by nearly every celebrity in Hollywood would be laughed out of these groups. Instead, accepting QAnon as a matter-of-fact truth is uniting these groups with the aforementioned “Save the Children” marches. 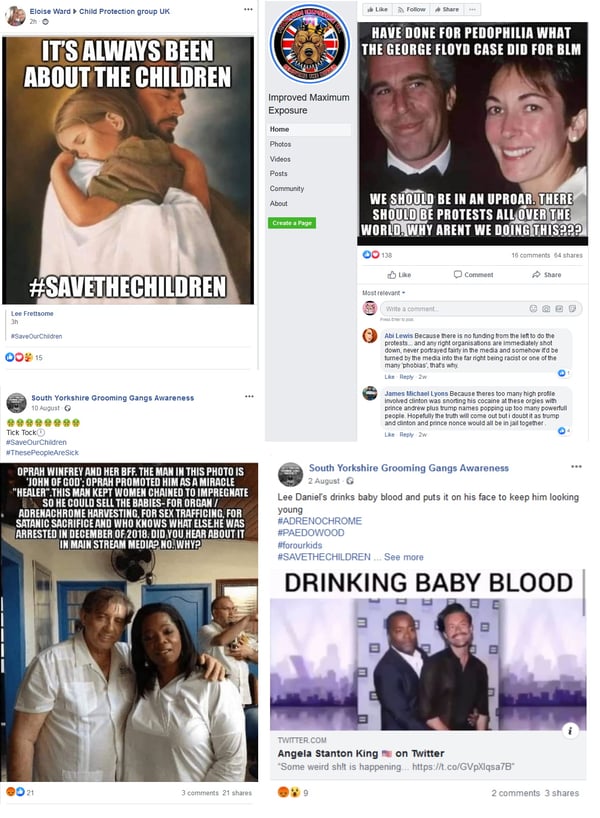 This alone is an alarming development in the disinformation ecosystem due to vigilante groups’ existing to organize online and then spill out into real life. However, we also noticed posters for a march planned in Nottingham being shared across these groups. Unlike other “Save the Children” marches on the same day, the poster declared a whole mix of issues being marched for, and it had a distinctly nationalistic feel to it. 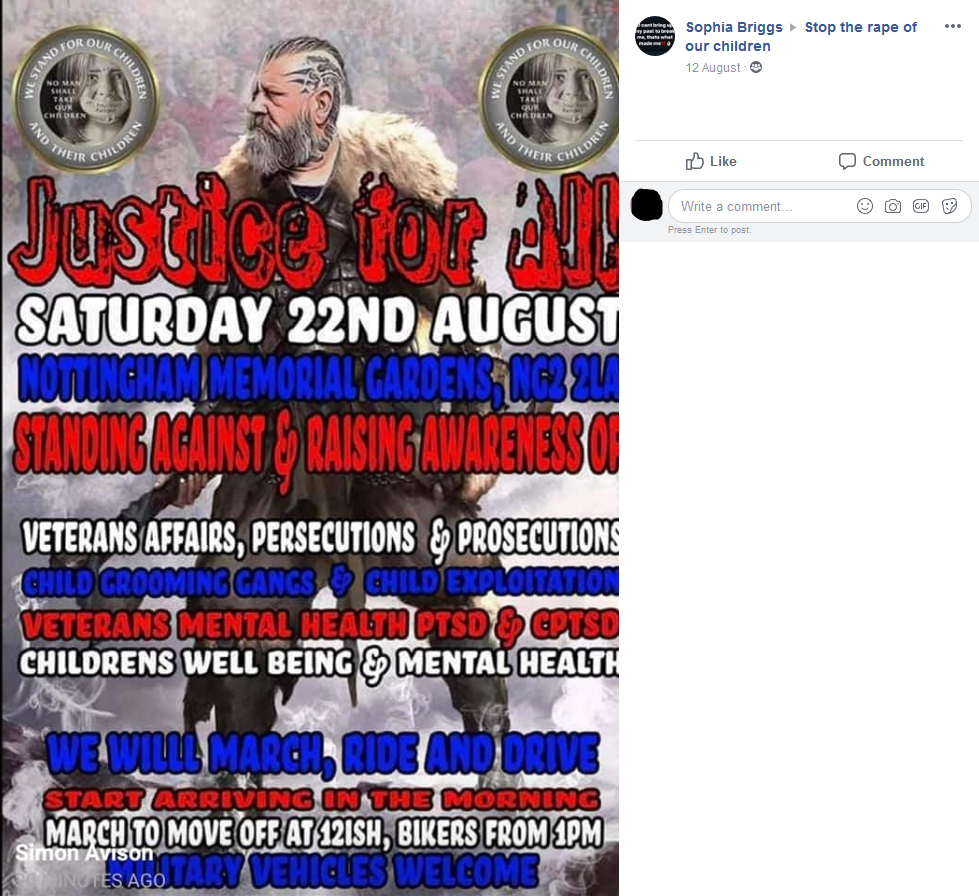 More concerning, the account that shared this poster had a Marie Le Pen quote as their Facebook banner.

Investigating further, we were able to find that this march was organised by Dean Cumberpatch and Simon Bean (aka ‘The Mad Viking’ and ‘Maverick Veteran’ respectively) – two campaigners for veteran rights. Dean is the founder of Never Surrender, a veteran support group organised into chapters. The group also marches for a variety of causes – most recently against Black Lives Matter to supposedly guard statues and war memorials in London.

Though both Dean and Simon vehemently deny any connection to racism, the Far-Right connection and endorsement by their fans cannot be ignored. A recent promotional video for the march made by a fan focussed predominantly on refugees, borrowing talking points from the BNP (British National Party) and UKIP (UK Independence Party). 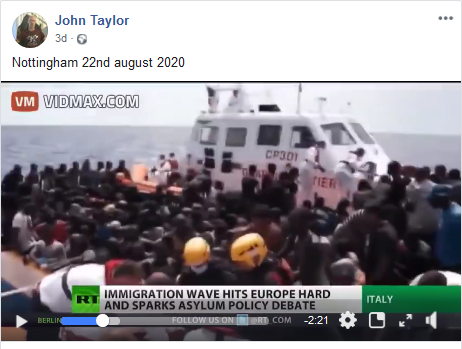 Crucially for the connection of this march to the previously reported “Save the Children” marches, we also discovered that Dean and Simon both openly endorse, and perhaps even believe, in the QAnon conspiracy. Simon titled another promotional video for the march with “The Great Awakening” – the transcendental moment of change in QAnon lore. When asked explicitly, Dean confirms that he believes in the QAnon conspiracy. 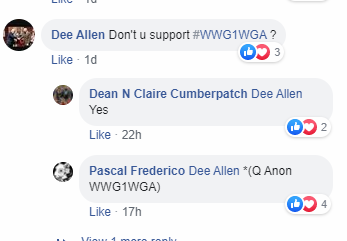 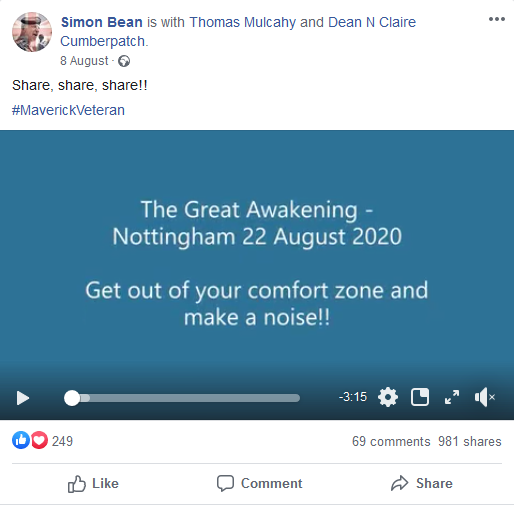 Whether this belief is sincere or not remains to be seen. In a recent video delivering information about the march, Dean makes reference to Q, but in broad and sweeping terms. Like other fringe groups, courting QAnon may be a way to swell ranks. Given the muddled nature of what the march actually stands for, this may be a likely explanation.

However, mixing a fervent online conspiracy with groups more adept at offline action is a worrying development. Responses to arranged counter-protests from Black Lives Matter, trade union, and anti-racism groups (who appear to be characterising this march as a typical far-right event), reference QAnon sentiment – accusing Nottingham activists of being paid for by George Soros. 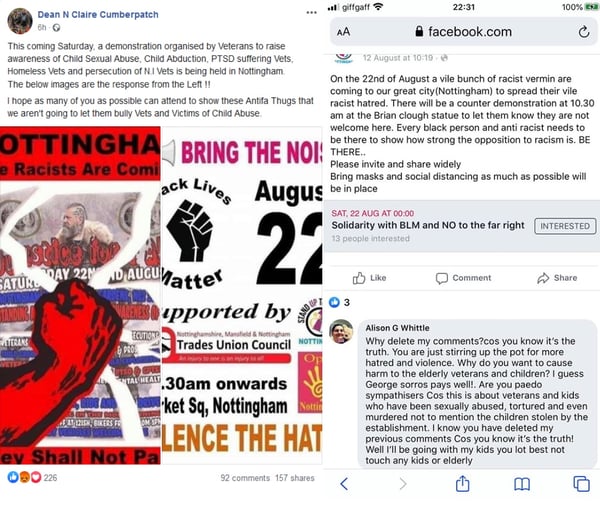 As QAnon becomes mainstream, it loses focus at the edges. Its inclusion in UK paedophile hunting groups and in Dean and Simon’s march is fragmented (stripped of pro-Trump sentiment), the lore of the movement included as the wider, unavoidable background to the action they take offline. This fuzzier, less devout version of QAnon is, arguably, more insidious. It points to QAnon’s lore now being interwoven with the worldview of people who would not normally come into contact with the conspiracy. When those are people who are already angry at the world and feel the need to take action, the likelihood of misdirected or confused violence increases. Just how many QAnon signs and chants are in Nottingham this weekend remains to be seen, but with the city centre becoming a crucible for a variety of groups, some of whom are eager to mete out justice on who they think are part of the deep state, the march paints a worrying picture of future UK Right Wing protests.