Double Check: Is India’s Hunger Problem Being Blown Out of Context? 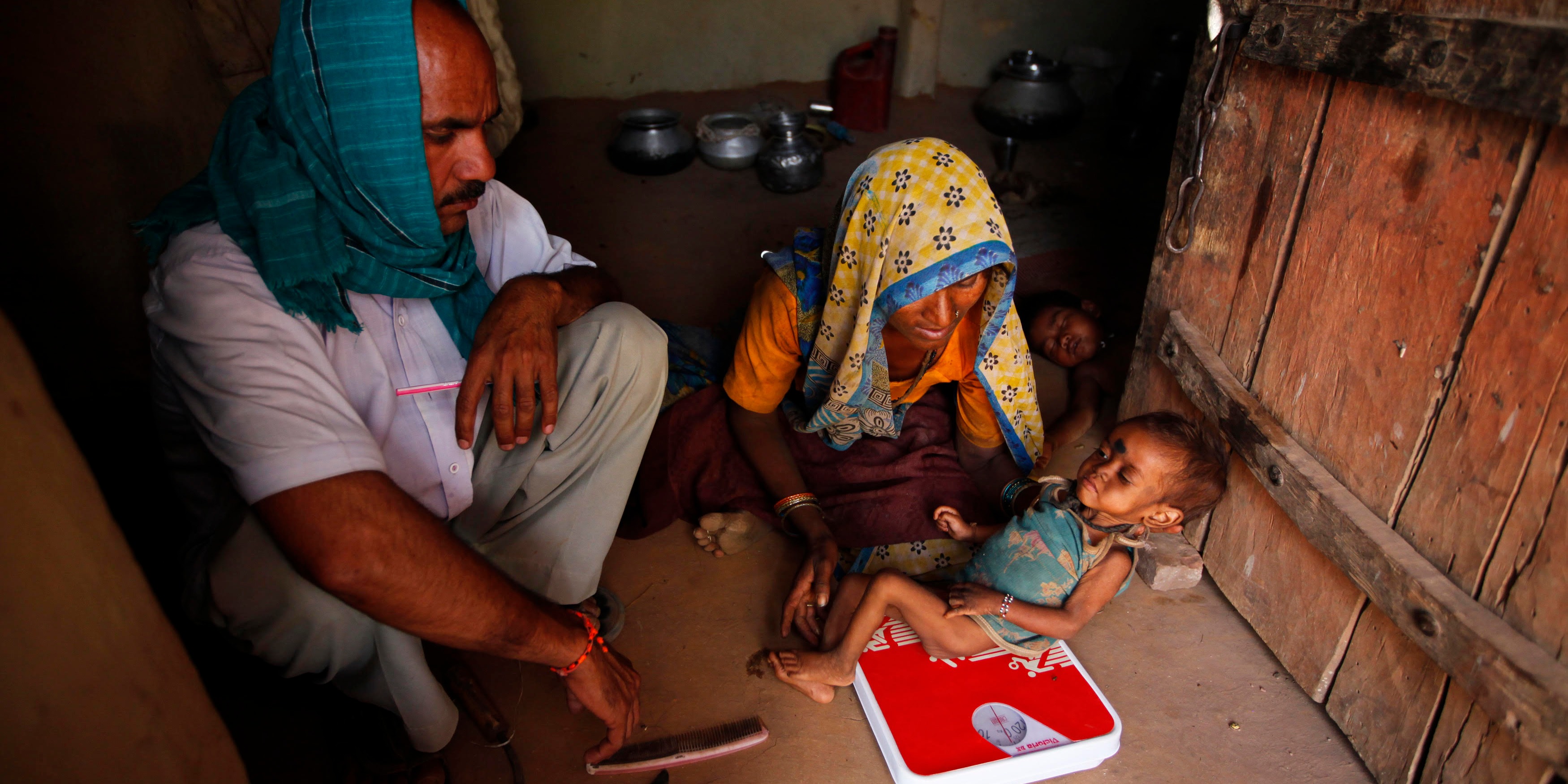 In response to India being ranked 107 from 121 countries in the 2022 edition of the Global Hunger Index (GHI), the central government responded alleging it was yet another attempt to “taint India’s image”. This was the second year that the central government responded negatively to India's poor scoring on the index. “Misinformation seems to be the hallmark of the annually released Global Hunger Index,” the Indian government said on October 15.

With a hunger level rated “serious” under the index, India ranked lower than neighbouring countries like Pakistan, Sri Lanka, Bangladesh and Nepal. The GHI “measures hunger and undernutrition at global, regional, and national levels,” and the only South Asian country to fare worse than India was Afghanistan.

Does India have valid objections to GHI’s methodology?

The GHI score is calculated based on a formula that combines four indicators namely (a) prevalence of undernourishment (PoU) that tracks population with inadequate access to calories; (b) child stunting in children under the age of five; (c) child wasting or children who have low weight for their height; and (d) child mortality.

Weightages of one-sixth each are given to child stunting and child wasting in the formula, while PoU and child mortality get a one-third weightage each.

One of India’s key criticisms of the index is that three out of the four indicators  relate to children, as a result of which they argue that the data cannot be representative of the entire population. But experts disagree.

“Child nutrition (child stunting and child wasting) is a standard, relevant and widely used metric of well-being. The Indian government has often criticized the focus on children's outcomes, which is not a valid criticism of GHI, " Reetika Khera, an economics professor at Delhi’s Indian Institute of Technology told Logically.

“Measuring hunger and malnutrition levels using data on the health of children is an age-old globally accepted practice,” according to Ambedkar University economics professor Dipa Sinha. “For a moment even if we believe that this method only reflects the health of children, doesn’t that still mean that Indian children’s health is extremely worrisome?”

The GHI website explains that most of the four indicators are related primarily to children because children are particularly vulnerable to nutritional deficiencies. “Child stunting has shown to be associated with impaired early motor and cognitive development. Child wasting is the most immediate, visible and life-threatening form of malnutrition. Child mortality reflects that death is the most serious consequence of hunger, and children are the most vulnerable,” the website reads.

India has also raised objections to the way in which prevalence of undernourishment (PoU) is assessed. The government claims that this “most important indicator was based on an opinion poll conducted on a very small sample size of 3,000”.

The government discredits the estimates by claiming that the GHI calculates PoU based on the Food Insecurity Experience Scale (FIES) survey module conducted through Gallup World Poll, described as an “opinion poll” based on eight questions with limited respondents. “The data collected from a miniscule sample for a country of India’s size is not only wrong & unethical, it also reeks of obvious bias.” However, India’s criticism of the PoU calculation and FIES seems misplaced.

According to the GHI website, “the prevalence of undernourishment indicator is assessed by the United Nations Food and Agriculture Organization (FAO),” not just the FIES survey. German non-profit Welthungerlife, which jointly publishes the GHI with Irish aid agency Concern Worldwide, had also made this clarification to The Hindu in 2021. The FAO data is based primarily on numbers reported by the member countries including India.

“The methodology used for the FIES survey is the same for every country and not just India, so we can’t complain of bias,” Sinha, who is associated with the Right to Food campaign, said. The FAO explains that the sample size on average is around 1,000 individuals, with larger sample sizes for India (3,000), China (3,500) and Russia (2,000).

Sinha also emphasized that the FIES survey would not have to be used in the first place if India had published official data on consumption from the National Statistical Office (NSO), the last of which was published for 2011 to 2012. When it was meant to be released five years later the central government withheld it citing “data quality issues” but leaks of the draft report to the media revealed that consumer spending in India had fallen for the first time in more than four decades in that time period.

Business Standard reported that the survey’s findings showed a dip in food consumption for the first time in decades, which, according to experts, signalled worsening malnutrition in the country.

While the Indian government has been rejecting GHI’s findings for the last two years, its ministers have previously used the index in parliament to claim the country’s performance on hunger had improved. In response to a question in the 2021 monsoon session, Minister of State for Consumer Affairs, Food and Public Distribution Sadhvi Nayan Jyoti had informed the Lok Sabha that, “As per GHI Reports, the composite GHI scores of India have improved from 38.9 in 2000 to 27.2 in 2020. Thus, the country has shown consistent improvement over the years.” This reply was tabled two months before the GHI’s 2021 rankings which the Bharatiya Janata Party-led government rejected.

What are the legitimate grounds for concern?

Experts say the inclusion of calorie availability (for making estimates regarding PoU), based on FAO data is not a very useful indicator.  “As economist Jean Drèze put it, you have to make ‘heroic assumptions’ about the distribution of the available supply of calories, in conjunction with the distribution of needs,” Khera told Logically.

India’s PoU increased slightly by over two percent between 2018-2020 and 2019-2021. Sinha says GHI estimates of hunger aren’t completely accurate as different methodologies could even point to “even more severe levels of hunger”.

The Indian Council of Medical Research (ICMR), in a detailed paper, has argued that “indicators of undernourishment, stunting, wasting and child mortality do not measure hunger per se”. The ICMR, like the Indian government, accuses GHI for giving “excessive weightage to under-five children”.

“Maybe the GHI could better be called the Global Nutrition Index to avoid any confusion. But that does not mean that it does not measure food insufficiency and that we should go all guns blazing against the report itself and release statement after statement to reject it," Dr. Vandana Prasad, a pediatrician who has served as a member of the National Commission for Protection of Child Rights, told Logically.

Regardless of the GHI rankings, the Indian government’s own data shows that India has a serious hunger problem, at least when it comes to children.

According to the fifth National Family Health Survey (NFHS-V) for 2019-21, the percentage of children wasted under five years was 19.3 percent. Child stunting in the same age bracket was at 35.5 percent. These figures are used for India’s assessment in the GHI, with it faring the highest in child wasting.

While there was slight improvement by under three percentage points on both these indicators compared to 2015 to 2016, the data included concerning findings on ‘severe’ malnutrition among children. Analysis of district-level NFHS data reveals that almost half of Indian districts recorded an increase in severe wasting or severe acute malnutrition between 2015-2016 and 2019-2021. Additionally, data shows anaemia levels among children increased by almost ten percent in the same time period.

“We do not need the GHI to know that India has a serious problem of undernutrition. The levels of stunting are high and are not declining fast enough. One reason for the slow progress on this is our unwillingness to acknowledge the seriousness of this issue," Khera said.

The government’s response to the GHI can be seen as an indication of dismissing the issue. The central government argues that it is undertaking extensive programmes to ensure food security such as distribution of additional foodgrains to 80 crore beneficiaries from March 2020. But activists and experts allege that this doesn’t solve the problem of poor nutrition.

Nearly 71 percent Indians cannot afford a healthy diet, even with public programmes factored in,  Centre for Science and Environment (CSE) and Down To Earth reported in June this year.

“Close to a 100 million people stand excluded out of India's public distribution system since the government is still using the 2001 population data from the Census rather than updated estimates for 2022,” said Biraj Patnaik, former Principal Adviser to the Commissioners of the Supreme Court in the Right to Food case. “Rather than quibbling over global rankings, as a country we must address the underlying causes of malnutrition which go beyond food and cover other social determinants” Patnaik said.

“Of course India has the largest food security programme, but the evidence is suggesting it's not enough. Moreover, after more than 75 years of Independence, our aspiration cannot just be improving cereal consumption; we need to work on providing decent quality of food to our people," Prasad said.

Double Check: Is It Illegal To Offer Namaz in Public in India?

By Priyanka Ishwari and Ilma Hasan