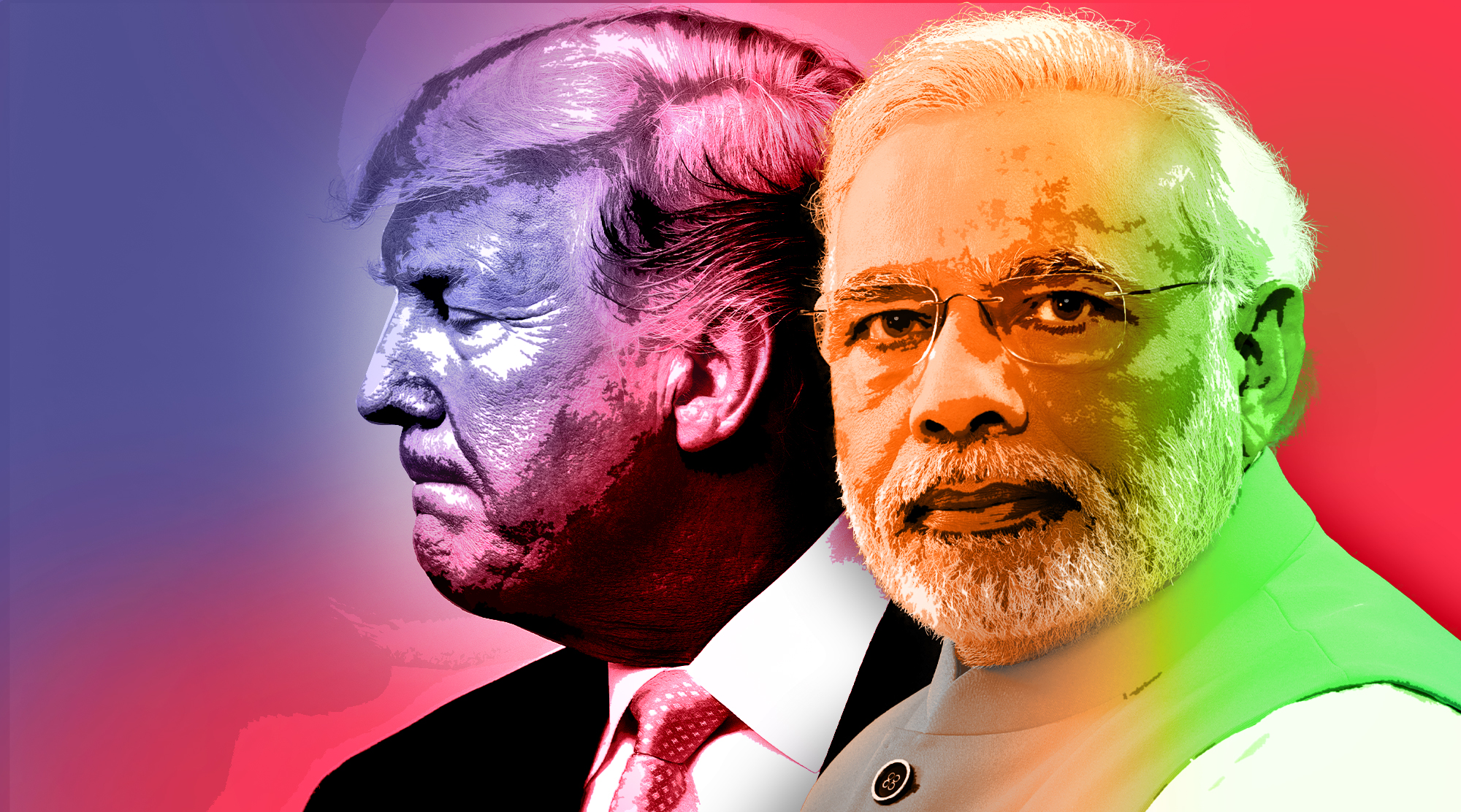 When the Democratic Party’s Presidential Nominee Joe Biden picked Kamala Harris as his running mate, she ticked three key demographic boxes—a woman, with Black and Asian parentage. In her DNC acceptance speech when she spoke of her Tamil mother and her family values, Indians both at home and abroad celebrated her with pride. But this enthusiasm was not shared by all Indians alike, especially not the majority of Hindu Nationalists who have pledged their support for President Trump. To them, Democratic Senator Harris is a leftist who is overly sympathetic to Muslims, undocumented immigrants and above all, a Christian who is trying to leverage her hindu connections for political reasons only.

In 2016, part of President Trump’s campaign used a slogan specifically designed to appeal to pro-Modi Indian Americans, “Ab ki baar Trump Sarkar” (This time a Trump government). The slogan was a direct reference to Modi's own slogan from 2 years earlier in 2014: “Ab ki baar Modi Sarkar”. In an attempt to emulate the success of  Trump’s 2016 slogan with the Indian-American community, Biden’s 2020 campaign has slogans in 14  Indian languages.

A recent study shows that, like African-Americans and Latinos, Asian-American voters are more likely to turn out for a party if there is a “co-ethnic” candidate on the ballot, that is someone of the same ethnic background as them. Harris’ presence on the ballot, therefore, represents a significant electoral boon to Democrats in those key states with large Indian-American electorates, and also partly explains why Harris has come under a particular kind of attack. Ever since Harris’ nomination, conspiracy theories and false claims floated by pro-Trump groups have spread across the internet targeting Harris’ identity, and particularly her Indian bona fides. A new strand of “birtherism” (last seen used against former President Obama) was rolled back out for Harris as a means to question her eligibility for high office.

Prominent western figures on the Indian right such as Pro-Trump Hindu Nationalist Renee Lynn have warned Indian-Americans that Kamala Harris is not Hindu, that Indian-American voters should not be ‘misled’ by her Hindu name, and describing her as “Hindu-hating”. Harris herself identifies as Christian, though she maintains that she was brought up with Hindu and Christian values.

In a tweet where Harris is shown pictured with Alexander Soros, the son of George Soros, Renee Lynn alleges that Soros spearheads a movement she calls “anti-India” and “anti-Hindu”. George Soros is well-established as a hate-figure for the American right, which accuses him of funding various groups or movements with which they take issue. Hence, the image showing Harris together with a member of Soros’ family has been used to further allegations that Soros has an outsized influence on the global order and that Harris was his choice. Lynn, a white woman who tweets under the name “Voice for India,” regularly posts inflammatory content clearly intended to sow division within Asian-American constituencies; particularly between Hindus and Muslims. In her tweets she has time and again called for Indian-Americans to vote for Trump, praising him as pro-Hindu, and denouncing Biden and Harris as anti-Hindu (and, by implication, pro-muslim). With over a hundred thousand followers, Lynn’s content has been widely shared on Twitter and duplicated on WhatsApp to reach Indian groups in both the U.S. and India.

“Birtherism” and religious identity may be relatively novel political issues in the west. In India though, identity, caste and birth have long played a crucial role in political rhetoric. Mud-slinging Indian politicians often focus on sensitive differentiating factors such as their opponents’ caste and religious background, before addressing their suitability for the role. Among the favourite targets for these smears are the Indian National Congress’ (INC) Gandhi family. Time and again Congress leader Sonia Gandhi’s Italian ethnic origins and her religious beliefs have been questioned; there have even been allegations that she has a “ Nazi-Italian” background. These questions around politicians’ ethnic and religious identities are not only distasteful, but also effective at damaging political credibility in a country and culture where these things carry a significant weight in the minds of the public.

The adulation for President Trump from the Indian right stems largely from his friendship with Prime Minister Modi, a posturing manoeuvre which works in the interest of both India and the U.S. geo-politically, particularly in relation to both nations’ diplomatic disputes with China. Trump has also leveraged Hindu nationalists’ fondness for anti-Muslim narratives, and drew particular approval from far right Indians after his infamous ‘Muslim Ban’. A virtual rally “Hindus4Trump” organised on 19th July 2020 by the Overseas Friends of the BJP included groups such as the Americans4hindus, a PAC. The topics of discussion ranged from a concern of Democratic support for Leftists and Islamists, a need for an merit-based immigration policy, a need for Trump’s support for the alleged plight of Hindus in Bangladesh, Pakistan and Afghanistan (an explicit call for endorsement of the controversial Citizenship Amendment Act in India), and the need for Trump to appoint a Hindu leader to the US Commision on International Religious Freedom.

Historically, Indian-American migrants took to political activism as a response to the social, cultural and economic marginalisation they experienced in the U.S. Today they are a sizable demographic with considerable influence both financially and culturally. In the 2020 Presidential election, appeals from the right to the Indian-American voter have very little to do with American politics. Instead, they rehash the issues of religious identity and nationalism peculiar to domestic Indian politics. Fortunately for Trump, there is already a thriving ecosystem of disinformation narratives ready to seamlessly translate between conservative Hindu Nationalists and the American right.

Russian Disinformation on Students Filters Through to Indian Media

This article was corrected to reflect the fact that the refusal of Indian and other students of color at the Ukrainian border was explicitly racist. It also added further context to the scatter graph of Twitter users.