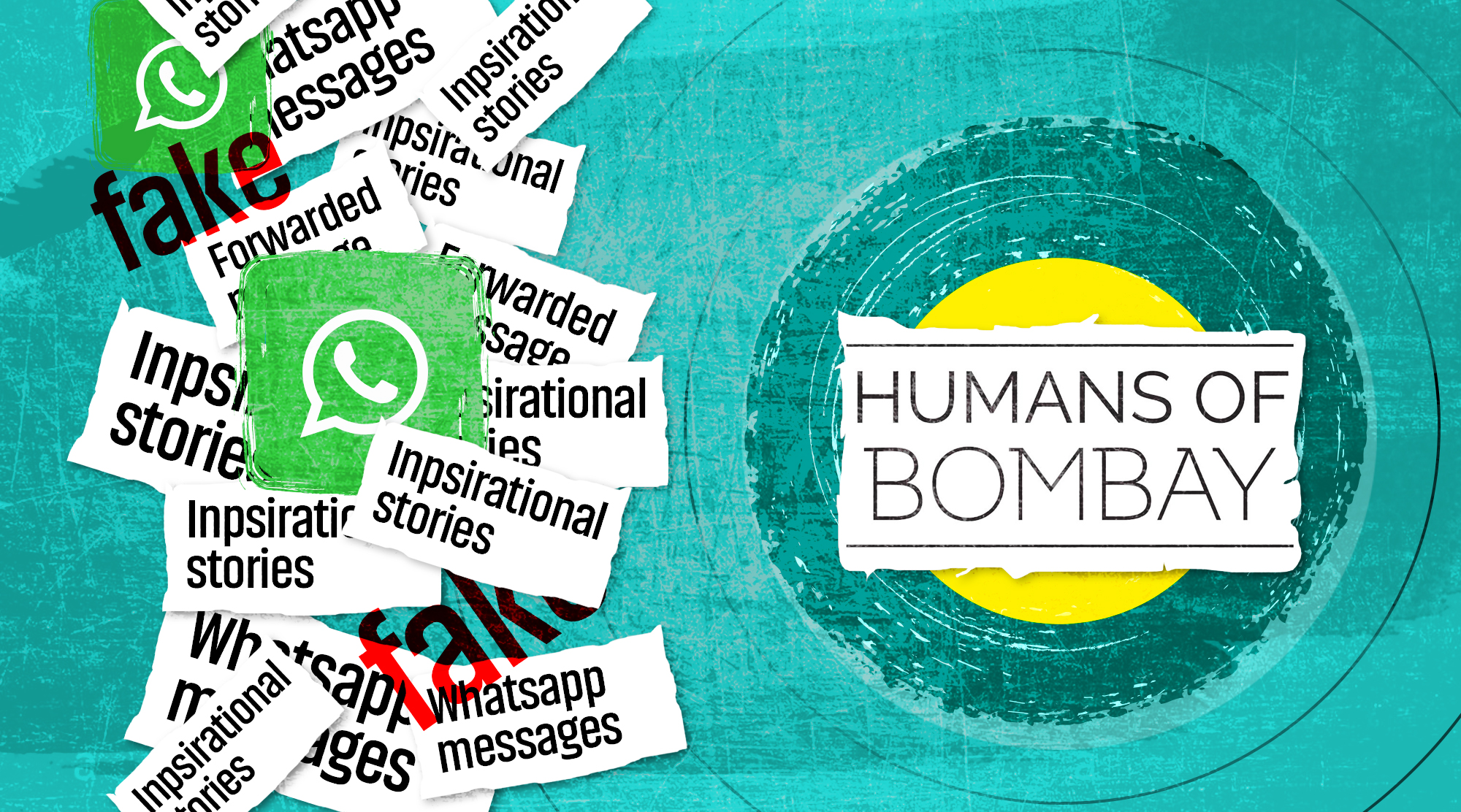 Founded in 2014, Humans of Bombay (HOB) - the Indian equivalent of Brandon Stanton’s wildly popular photoblog Humans of New York – has evolved into a major storytelling platform. What started as an attempt to chronicle the sufferings endured by ordinary people living in the mammoth city of Mumbai has emerged as an influential social media page for building corporate and political brand identities.

Most of the stories are centered around human suffering - ranging from poverty, death of a loved one, terminal illness, disability, sexual assault, body image issues, and gender discrimination. Sometimes the narratives veer to other brighter sides of human experiences, including posts of love stories, childbirth, pet adoptions and the like.

Whatever hardships the subject faces, the end of each story is invariably painted with ‘good vibes’ brush strokes. Struggles are romanticized and the subjects usually sign off by saying they have managed to triumph over their difficulties. In those rare instances when the silver lining is missing, the dialogue shifts to emphasizing how the protagonist made peace with whatever problems they were facing and how they developed an indestructible spirit of resilience.

In less than 7 years, Humans of Bombay has built an online community of more than 1.2 million people - making it one of the largest blogs in India. According to the statistics published on its official website, each Humans of Bombay post gets an average of 61,000 likes, 5,600 shares, and 1,200 comments and has a reach of 7 million users. The flurry of positive comments on each post indicates that the ‘feel-good’ quotient is a hit, striking a chord with most readers.

The success of the platform has attracted the attention of leading brands in the country and marketers have made a beeline to promote products through this storytelling model. The page has collaborated with the likes of Maybelline Cosmetics, Amazon Prime Video, Hindustan Unilever, Seniority Ltd, Metro Shoes, and Tinder India to name a few.

However, as the page became more populated with branded content, readers have begun to cast doubts over the authenticity of the stories. Ironically, the feel-good nature of the stories which had catapulted the platform to success, was what was fuelling a wave of cynicism among followers. The stories felt too good to be true.

In January 2019, less than three months before the country was to vote in the Lok Sabha elections, Humans of Bombay published a five-part interview of Prime Minister Narendra Modi. He was photographed against a serene, picturesque background. He talked at length about his childhood, narrated how he would help around his father’s tea stall and reminisced about attending his first RSS meeting at the age of eight. He left for the Himalayas at the age of 17 and spent time at the Ramkrishna Mission, he said. The monologue also mentioned how his mother made him promise that he would not accept bribes when he was appointed as the Chief Minister of Gujarat.

The post went viral but many users criticised the page calling it a propaganda machine. On May 30, 2019, Narendra Modi was sworn in as the Prime Minister of the country for a second term.

In a recent incident, a Facebook user named Saddam Maniyar called out HOB for allegedly publishing a fake story on July 14, 2020, on its Facebook and Instagram channels. The story was about a Mumbai-based barber’s hardships during the lockdown imposed by the government this year to contain the spread of coronavirus.

The narrative ended with a reference to how Gilette helped the barber procure protection kits, masks, razors, and cutting supplies when he reopened his shop after the lockdown was lifted. He was also quoted as saying that the company even gave him a health insurance policy of Rs 1 lakh. The post ended with the hashtag #GiletteBarberSuraksha. At 11.53 pm on July 14, Maniyar posted a video where the barber in question can be seen denying that he has a flat in Mumbai, as claimed by HOB and denying, too, that he had given permission to the page to publish his story. In the video, which went viral, Maniyar mentions that the barber is a resident of Pune. Maniyar stated, “They (Humans of Bombay) started continuously editing the story once I confronted them & also deleted my comments on their Instagram page.” The HOB post's edit history shows the changed version of the story which went live at 12 pm on July 15. The Gilette hashtag was removed.

On the night of July 15, HOB issued a clarification on their Facebook page along with a 4-minute audio recording. It stated that the recording is “of Mr. Imran (the barber) confirming the clarified narrative, wherein our writer has read out the translated storyline by line to him and he has confirmed the same.” Throughout the recording, Imran does not speak a single full sentence but can only be heard saying ‘yes’ to a female interviewer who frames details about his life in the form of questions followed by a ‘barabaar hai?’ (Is this right?) The audio clip also confirms that the barber was a resident of Pune while the original post had stated he lived in Mumbai. Followers also raised questions about HOB only releasing the template of the consent form in its clarification, citing privacy concerns, and not the one signed by the barber.

On July 17, 202, Karishma Mehta, the founder of Humans of Bombay tweeted that she had filed an FIR against cyber-harassment and defamation. Neither Mehta nor Maniyar could be reached for comment.

Maniyar posted an update on the evening of August 11, saying he has been informed by Humans of Bombay that the barber's story was given to them by Gilette. He said, “After we pointed out the contradictions in it, HOB has reverified and edited their original post with the correct locations of his native place, house and shops.” Maniyar also appended a disclaimer adding that he wasn’t doing anything for monetary gain. Interestingly, HOB’s clarification had no such mention of the story being given by Gilette. A report published by The Quint on the matter was also taken down within a few days of the incident.

Humans of Bombay’s popularity is symptomatic of the larger trend of Indians’ fascination with stories that are quintessential ‘inspiration porn’. There have been instances on Quora as well where Indian users have been regaled by motivational answers posted from fake accounts. Be it WhatsApp family groups sharing an inspirational quote falsely attributed to industrialist Ratan Tata or the recycling of false claims about UNESCO declaring that India has the best national anthem, the best prime minister and even the best currency in the world – laudatory social media claims and human interest stories with an inspirational spark or those that evoke a sense of pride rarely induce doubts about the credibility among readers.

Dr. Era Dutta, a consultant neuropsychiatrist at the mind wellness clinic in Kolkata says, “With social media, it is so much easier to share captivating stories and not care about authenticity. Inspirational stories about individuals that you meet down the street are highly relatable. Each one of us always aspires to be ‘more positive’ in life and external sources like the positive quotes, rags-to-riches stories, or anecdotes about famous individuals tend to catch our attention. It also has to do with the Pollyanna principle, which is the tendency of individuals to focus on the positive and use more positive words. Our brain tends to want to focus on the positive and not really care about “source” or the “authenticity” of the content.”

Dutta explains people are more gullible when it comes to positivity inducing fake anecdotes. She says, “People are constantly looking for the proverbial rays of hope. Add to it the long hours spent on devices and social media, and one is bound to stumble across these fake but feel-good stories. The need for a boost for positivity from an external source is dependency forming since it boosts our dopamine and leaves us craving for more and these can become addictive.”

Noreen Masud, an Early Career Fellow at the University of Durham explains, “Fake feel-good stories become viral because they're so brief and contained: easy to share, quick to read, suitable for grabbing the attention of someone idly scrolling. On another level, telling and passing on anecdotes is a way of bonding with each other, strengthening the ties within a community. This is true of positive stories as well as things like gossip. We're often trained to distrust the anecdotal: to call something 'anecdotal evidence' is a way of dismissing its validity. Yet the stories of individuals continue to be compelling: they can be more relatable than figures and data, they offer hope, and crucially we continue to think that one person's story maps easily on to bigger patterns, that it can tell us something broader about how the universe works or what we might hope for ourselves.”

Attributing false inspirational stories to well-known figures amplifies people’s willingness to believe them, says Masud. “Without an authoritative or famous name, a quotation is just someone's passing thought - we've got no reason to pay attention to it! I see this a lot with fake Oscar Wilde and Shakespeare quotations: anything faintly witty or wise or 'old' sounding gets legitimated with a famous name, and circulated as a meme. We think we're objective: that we judge what we see and hear on its own terms. But really our judgements are deeply filtered by our beliefs about the person 'saying' the quotation. If it's someone society thinks is credible or wise, we're far more likely to trust, believe and pass on the inspirational quotation,” she says.

Such stories also wield a powerful impact in brand campaigns, Masud says, “Advertising and marketing fundamentally depend on inspirational stories. The same basic pattern is repeated everywhere: our shampoo made this person's hair silky and glossy - it can transform yours, too!” The fact is, feel good stories sell products, so it shouldn’t be that surprising that a feel good factory like Humans of Bombay has attracted corporate sponsorship. Unfortunately, it seems that in these trying times, there weren’t enough feel-good stories to go around, so in order to keep those big contracts, HOB isn't too shy about twisting the truth to fit the narrative they want.