How White Supremacists Organize on Telegram 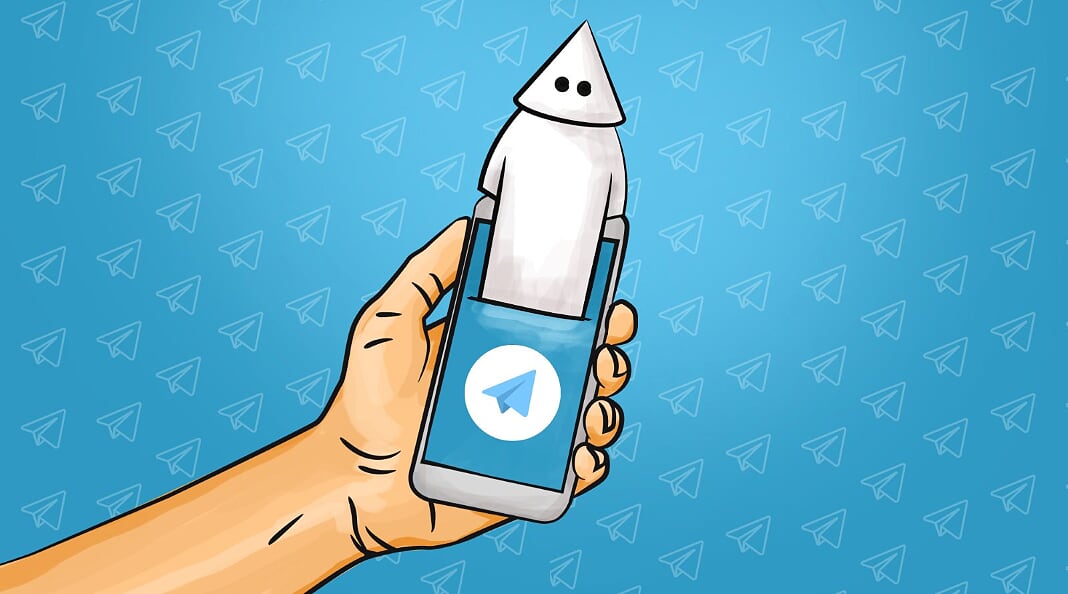 Logically has gained access to and investigated a network of nine white supremacist channels on the messaging platform Telegram. The channels share illegal and extremely disturbing content, and have adopted organized disinformation tactics with the ultimate goal of provoking racial conflict. As well as finding coordinated disinformation tactics designed to fuel racial tensions online and encourage them to spill over into real-world violence, we learned about the advanced security measures the network uses to protect its content and members on Telegram.

Telegram is an end-to-end encrypted instant messaging service similar to WhatsApp. One of the things which makes Telegram different, however, is that it allows for users to deploy code, bots and other scripts in their channels. Conversations are also cloud-based, unlike WhatsApp, so content is not stored on users' phones. Conversations are structured into "secret chats" or "channels" that act as rooms for unlimited users, with the channel creator acting as an administrator.

The network we investigated consists of nine Telegram channels, the largest of which has a daily reach of 27,000 people. All nine channels openly spread white supremacist, anti-Semitic and anti-police ideas, and openly advocate for a race war. The typical content of the network is extremely disturbing. There are numerous videos and images demonstrating violence, dead bodies and supposed homicide. Besides visual content, the network shares right wing literature, quotes, music and news relevant to the group. With the beginning of the Black Lives Matter protests the network also adopted co-ordinated online disinformation tactics.

The core aim of the group’s disinformation tactics is for users to effectively fuel racial tensions without leaving their homes. Administrators advise users to stay at home based on the suspicion that police are tracking white supremacist activists, and that their involvement in protests within the community could potentially discredit the movement. There is also a tendency within these groups to view the current Black Lives Matter protests as strategically helpful to white supremacist movements, as their enemies (i.e. police and people of color, particularly African Americans), are already physically confronting each other in the streets. However, they see themselves as playing a valuable role in using their online presence to influence the popular perception of the Black Lives Matter protests in ways which play into their political ambitions.

We identified two principal tactics these groups use with the aim of fostering racial tensions online. The first is an organized campaign of trolling on a specified, high profile comment thread. The target thread, channel and event is identified by the channel moderators and a link posted for the groups to use. For example, there was an open call to “redpill” the comments section of the Black Lives Matter protests Youtube live stream from Mineappolis. Redpilling, in this context, is the act of pushing softer white supremacist talking points as a way of convincing those from outside the community to accept the arguments and ideology of those within, essentially ‘recruiting’ others to the white supremacist cause. 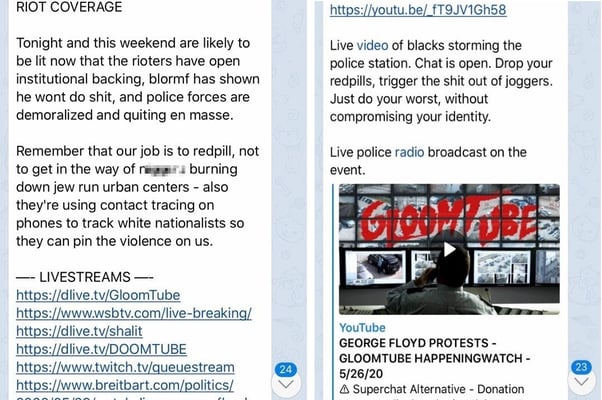 The groups also aim to spread civil unrest by spreading information and disinformation likely to cause panic. For example, one of the messages shared between the channels advised spreading all available information about disruption caused by the Black Lives Matter protests, aiming to cause another wave of “panic shopping” and accelerate civil unrest. Other messages, shared on all nine channels, called to "spread police disinformation" with the aim of both discrediting the police, and of provoking physical attacks on police by anti-police demonstrators. 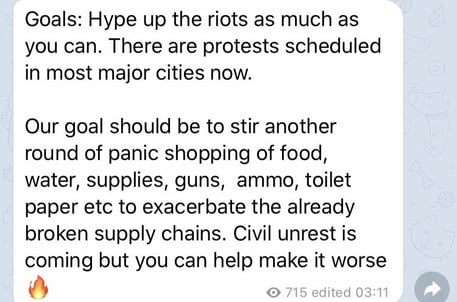 Special attention is paid to memes and Twitter trends. For example, a meme depicting police as an angler fish using the Black Lives Matter movement as a lure to distract "the angry white" was collectively pushed on social media by the network. The meme operation was judged successful after the meme was tweeted by Nick Griffin, an infamous British far-right politician, who has 37,600 Twitter followers. Another example is the sharing of a photo supposedly showing Derek Chauvin, the police officer who killed George Floyd, wearing a cap saying  "Make Whites Great Again''. The photo turned out to be fake, but in this case the goal was to keep "Make Whites Great Again" trending on Twitter. 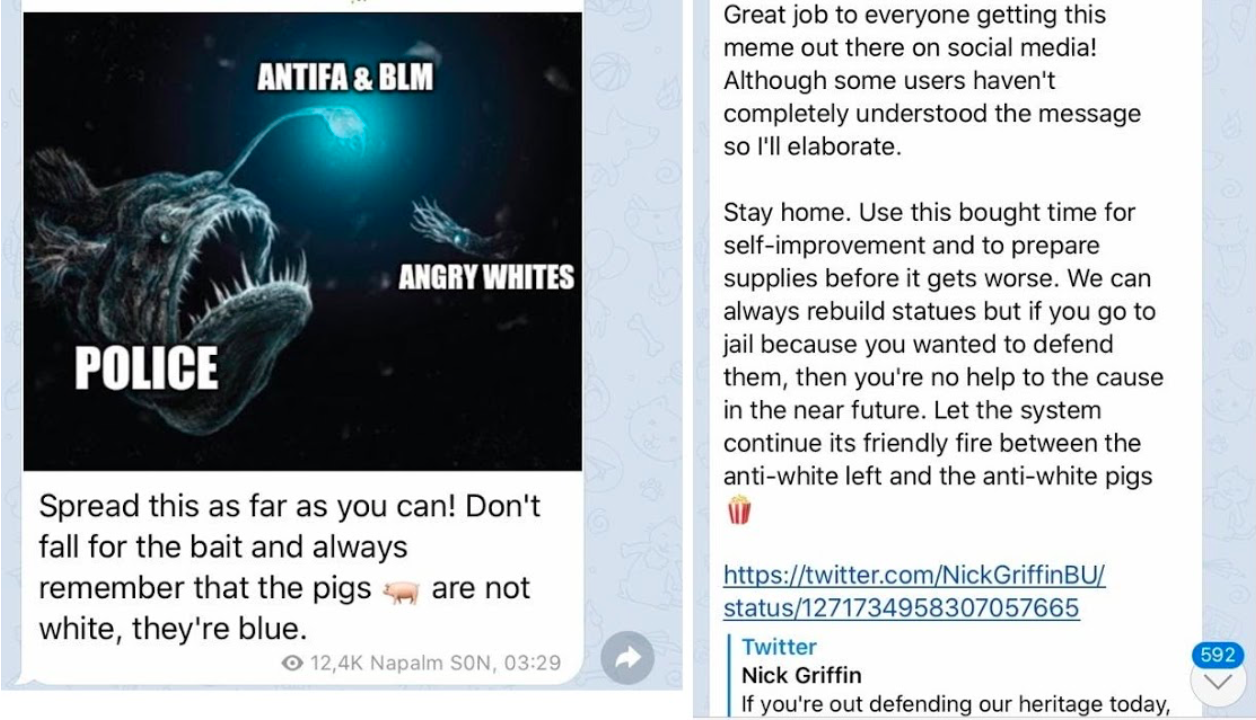 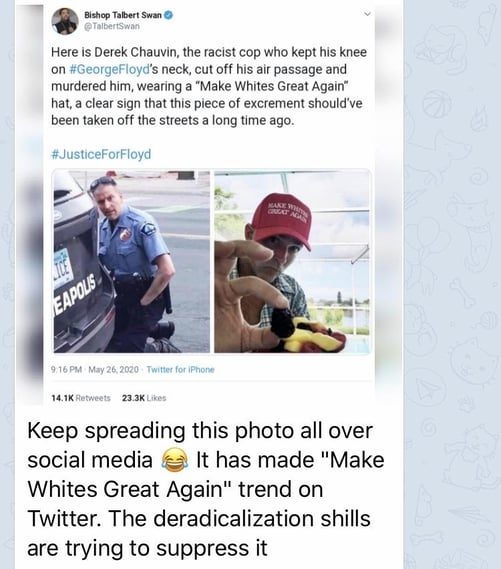 These groups are also responsible for helping to circulate manipulated images on social media. For example, one image shows two police officers holding a poster that reads "George Floyd deserved to die." This is an edited image, with the original poster reading "END Police Brutality." Interestingly, despite sharing a disdain for the police and eagerness to incite further violence, the members of these Telegram networks viewed the much more covered Boogaloo Boys as irresponsible and foolish for taking their activism offline and involving themselves in what they considered a conflict between two enemy camps. 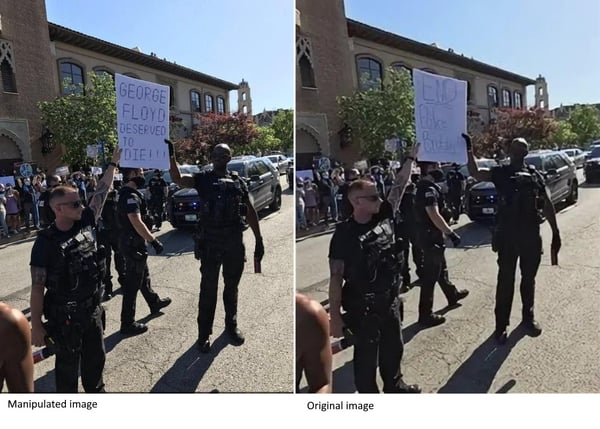 One particularly disturbing technique used by the network is the political manipulation of videos depicting animal cruelty. The network posts a number of videos of people of color being violent towards animals. These videos are explicitly targeted at white women, with the aim being to normalise white supremacist attitudes among that group.

Telegram was not chosen at random as a platform for white supremacist organizing. This messaging app is heavily encrypted and allows users to remain entirely anonymous. Recently, several organizing channels known for containing white supremacist material were blocked by the platform. As a result, the network we investigated introduced extra security measures to protect its content and members. For example, all nine channels “cross-post” content; a strategy adopted to circumvent top-down platform moderation, helping to keep content accessible despite attempts to ban it. Even if one channel is banned and no longer available on the platform, the cross-posted message can be easily accessed on other channels.

The group moderators advise users to be very careful, to not post provocative or illegal content on personal social media feeds and monitor contacts to guard against infiltration. As an additional security measure, moderators revealed another tool that enables them to delete the whole chat history near instantaneously, which is deployed if users are concerned that a suspicious person has joined the channel. The evolution of operational-security measures and track-covering in online white supremacist groups is of great concern, as it indicates an awareness of monitoring and shows an adept grasp of countermeasures. As seen in the screenshots below, moderators call for users to practice using the chat-scrubbing tool to prepare them for a scenario where it might be necessary. Equally, the platform’s cloud-based data holding is helpful for ensuring users keep illegal material out of their possession, potentially protecting them from legal consequences. This function is in contrast with apps like Whatsapp, which downloads material directly onto users' devices, increasing possible user liability for illegal content posted to groups they are members of. 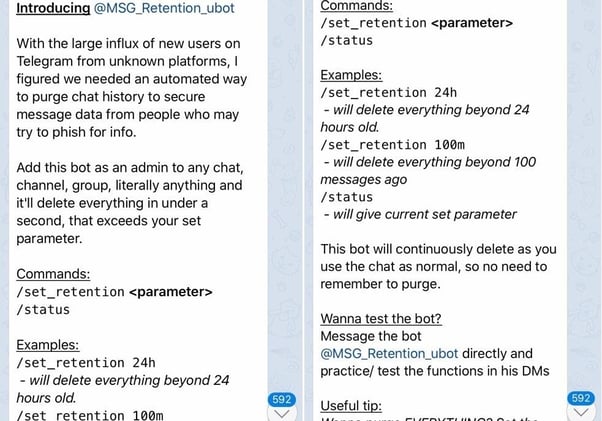 Our investigation shows that these groups are implicated in a structured disinformation campaign with real world goals and impact. Some tactics are reminiscent of those seen on other platforms, as we have previously reported on 4chan, and aiming to exacerbate tensions between racial groups. The choice of Telegram as a platform and the elaborate methods of enforcing security that it allows for however, speaks of a group with established goals and discipline, not just ideologically, but operationally. The call to stay at home in particular is an acknowledgement that whatever battles take place in the streets, the information war will be won and lost online.

The rise of the 24-hour news cycle in the US is largely credited to the grim spectacle of the OJ Simpson murder case in 1994. Since then, cable news, then online news, and then social media platforms have all scrambled mercilessly for our attention.