How TikTok Evolved to Be Audibly Confusing 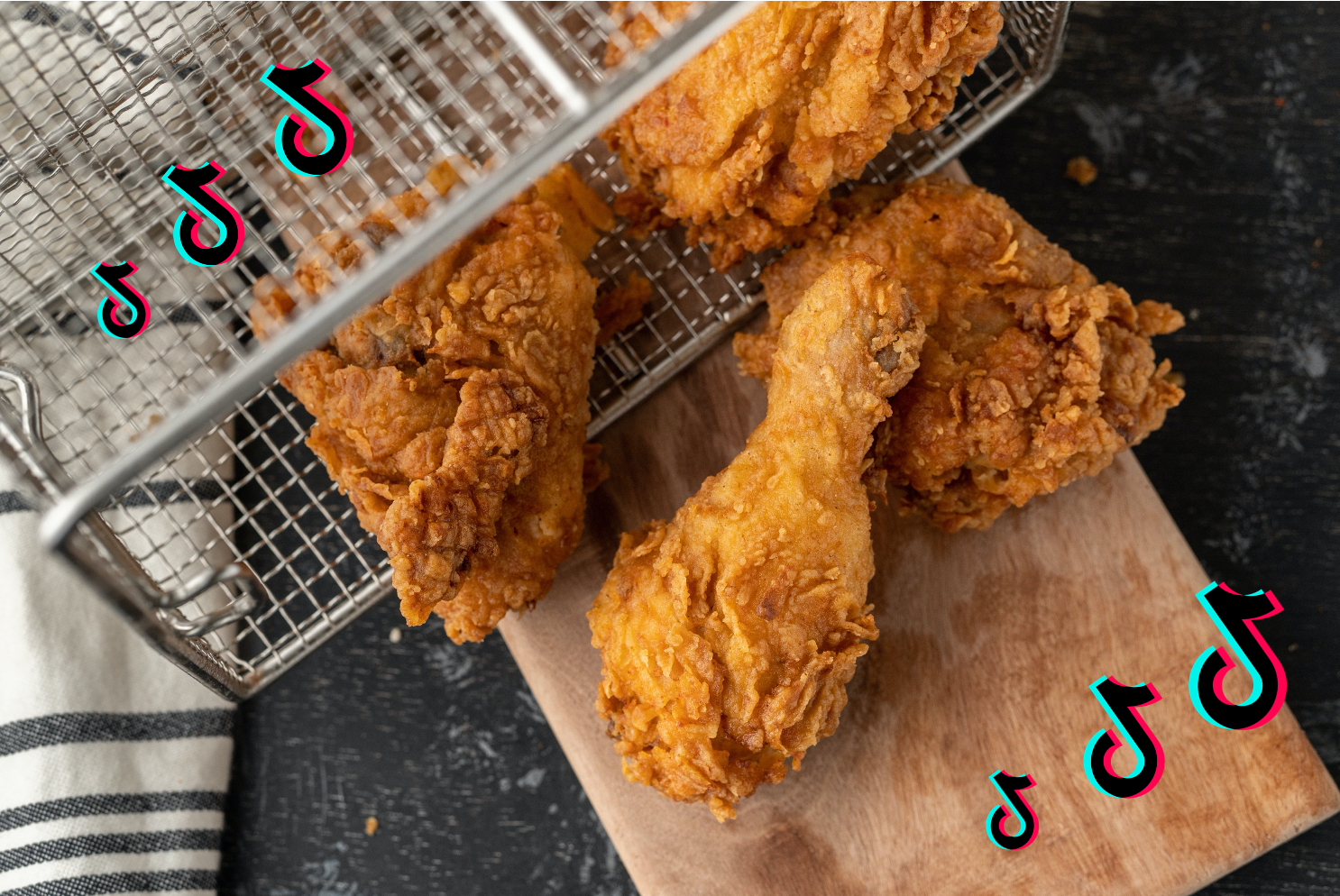 The video is simple: a pair of disembodied hands brush a delicious-looking sauce over fried chicken. But rather than a recipe demo or a mukbang, this is a call to action.

“This simple phrase could save a Black woman’s life,” the voiceover says. “Doctors are to Black women as police are to Black men!” The voice goes on to describe how doctors routinely dismiss Black women’s symptoms or self-reported experiences of pain, while the images show the brining, breading, and frying of a chicken breast. The caption reads: “A lot of my virality came from the usage of this audio to spread the message on #medicalracism. So I thought I’d bring it back! #misogynoir”

The user, @jordanramsy, had shared the same video a month earlier, but with a completely different voiceover – her own, in which she described the actual process of how to cook her Nashville Hot Tenders recipe shown in the clip.

These kinds of clips where the audio and video have seemingly nothing to do for each other are extremely common on TikTok. Indeed, they exploit the core features of the platform. Because one of the original draws of the TikTok was dancing and/or lip-syncing content, the audio is often the base that creators film themselves riffing on. It’s a way of putting a soundtrack to moments of your life. Whole conversations emerge spontaneously around the same audio clip. It’s how things are organized. Same song, different dance.

Entire memes crop up around certain songs or clips, and some songs have their own format entirely. For instance, The Magic Bomb by Hoàng Read (or what I fondly think of as the bonk-bonk song) is well known on the platform as “questions I get asked.” The song has a hand-jive dance paired with it, which is a sort of blase FAQ – answering common but tone-deaf comments. Rebecca Black of Friday fame has a good one.

But what is going on here? Why are these two things smashed together, and how do the demands of the platform make that somehow more viral than just...a chicken recipe, or a post about medical racism?

The practice of pairing makeup videos with social justice messages goes back to a December 2019 video from user Miss Aziz, which starts as a makeup tutorial, but then quickly pivots into a message about the ongoing genocide against Uyghur people in Xinjiang, China.

It was a clever way of drawing in a captive audience for makeup and getting them to care about a social issue. But also it was a way of avoiding TikTok’s moderation – as it’s a Chinese company, users anticipated that extra sensitivity might be applied to content relating to the Uyghur, and there’s nothing in the hashtags or captions to suggest that’s where it was going.

“I know the era and style of video,” said Rachel, who makes surrealist gothic art videos at @gothorella on both Instagram and TikTok. “It’s the one where people take social justice audios they appreciate… There's a strong belief on the platform among creators that if you don't do the things that straight TikTok likes, like the dancing or the trends or transition videos or outfit reveals, then they won't let your thing through the algorithm.”

After the spread of Black Lives Matter last year, the practice became a way of hooking people into listening to social justice messages they might otherwise ignore. The original audio for the chicken clip, for instance, came from creator Kiki (@thetalkofshame) and was posted on July 15, 2020 as a straightforward POV message to the camera. The audio continues to be paired with makeup tutorials, recipe videos, drawing, making ceramics, and closeup blackhead smushing/pimple popping. Another very similar clip from Lex Scott (@lethallex) has been paired with unboxing videos, a Roblox level, and “just making my morning coffee.”

Makeup TikTok proved to be a great place to do this. Because TikTok allows you to stitch audio from other videos, you don’t even have to record your own content – you can simply take a social justice message that’s already proven to be viral, and overlay it on your own purely visual makeup content. It effectively allows creators to double their potential viewership, bringing in both a social justice audience and a makeup audience.

I actually hate cooking, but I might as well commodify my whole life.

It’s not always social justice content – sometimes, the makeup artist will just tell an unrelated story. The account TMDmakeup, for instance, pairs day-in-the-life storytelling with abstract or surreal makeup tutorials. You stick around both to hear the end of the story and see the finished product.

“I actually hate cooking”, TikTok creator Katie Tucci told me. She has ADHD, and filming herself making a recipe is a way of tricking herself into actually making something. “I might as well commodify my whole life.”

Although she’s a law student in the uncommodified side of her life, on TikTok she runs a channel (@kaytuc) where she raises the profile of her side hustle: interior design and the sale of cool vintage stuff. Her channel often features her in a domestic setting – doing her hair and makeup, or perhaps baking banana bread – while pairing it with voiceover stories.

Watching the process begin creates the expectation of a finished product, and you stick around to watch the result.

For instance, there are entire TikTok channels devoted to cleaning. Videos that show the transformation of filthy garages and grubby kitchens into sparkling, functional rooms rack up millions of views. The most popular of these show the absolute grossest possible beginnings – like this video with more than 40 million views of creator Biggie Clean steaming 20 years worth of cigarette smoke stains off the yellow walls.

A few months ago, one (incredibly dangerous) viral trend showed a dirty sink or bathtub artistically drizzled and dusted with every single cleaning product from the cabinet, until it’s wiped down to a dazzling shine. (Presumably, the users in question later fell unconscious from chlorine gas poisoning.) Cleaning content has a pre-TikTok pedigree going back to Reddit's r/oddlysatisfying, or r/powerwashingporn – where users shared gifs of outdoor objects being washed back into pristine states.

For Katie, she doesn’t even bother to share the recipes sometimes. One video where she makes banana bread and explains the recipe – more of a recipe blog video than anything else – got only a few hundred views. But the same video overlaid with a voiceover story about growing up in rural Maine has several hundred thousand views.

Katie herself does not think too hard about what sorts of images she pairs with her stories, and makes no intentional connection. She told me that she just rambles into the microphone, and either pairs the story with some process, or deletes it and moves on forever.

The process helps create a feeling of completion – just as we get to the end of the story, the cake has been baked, or the room is spic-and-span.

Rachel confirmed this: the videos with voiceovers have much greater engagement. She told me that she’ll periodically resurrect old videos of the same silent art process and slap a voiceover on top of them, and get three times the engagement she did the first time around.

TikTok content is becoming increasingly frenetic and more choppy. Memes are becoming more and more absurd. Vox’s Rebecca Jennings and Taylor Lorenz at the New York Times both wrote about the evolution in the past week – Lorenz explaining how text-heavy memes have taken over Instagram, and Jennings wrote about “chaos edits”: intense and surreal combinations of video games, old music videos, and robotic voice-overs to make, of all things, ads for Amazon (even as an error).

Creators also debate and call each other out on whether they’re raising awareness or just getting clicks. Rachel noted the potential contradictions in audio and visual content:  “It's starting to feel a little disrespectful of people being like, look, I'm pounding chicken and throwing it against eggs while we're talking about like a brutal murder that was perpetrated by the state.” More wholesome combinations might come along the lines of a Canadian-Ghanaian woman reclaiming the health of her culture’s cuisine, or a hugely popular series of videos from the Korean Vegan that pairs recipes with tips about how to deal with toxic parents or a bad ex.

It’s incredible that TikTok’s aesthetic demands and preferences are changing so quickly that I felt the need to write an explainer of what they are. But the truth is I’m already at least six months behind this trend. There are a dozen different ways of combining audio/visual tracks and captions, and creators already have developed a sophisticated vocabulary of editing techniques. Between an algorithm that nobody quite understands and the constant innovation of the platform’s creators, maybe geriatric Millenials like myself will always be doomed to fall behind and remain confused by fried chicken.

Should Wales ban the use of wild animals in circuses?

The use of wild animals in circuses in Wales cannot be banned on welfare grounds “because the evidence isn’t there”.