Join the Q: How the Wayfair Conspiracy Got Absorbed by QAnon 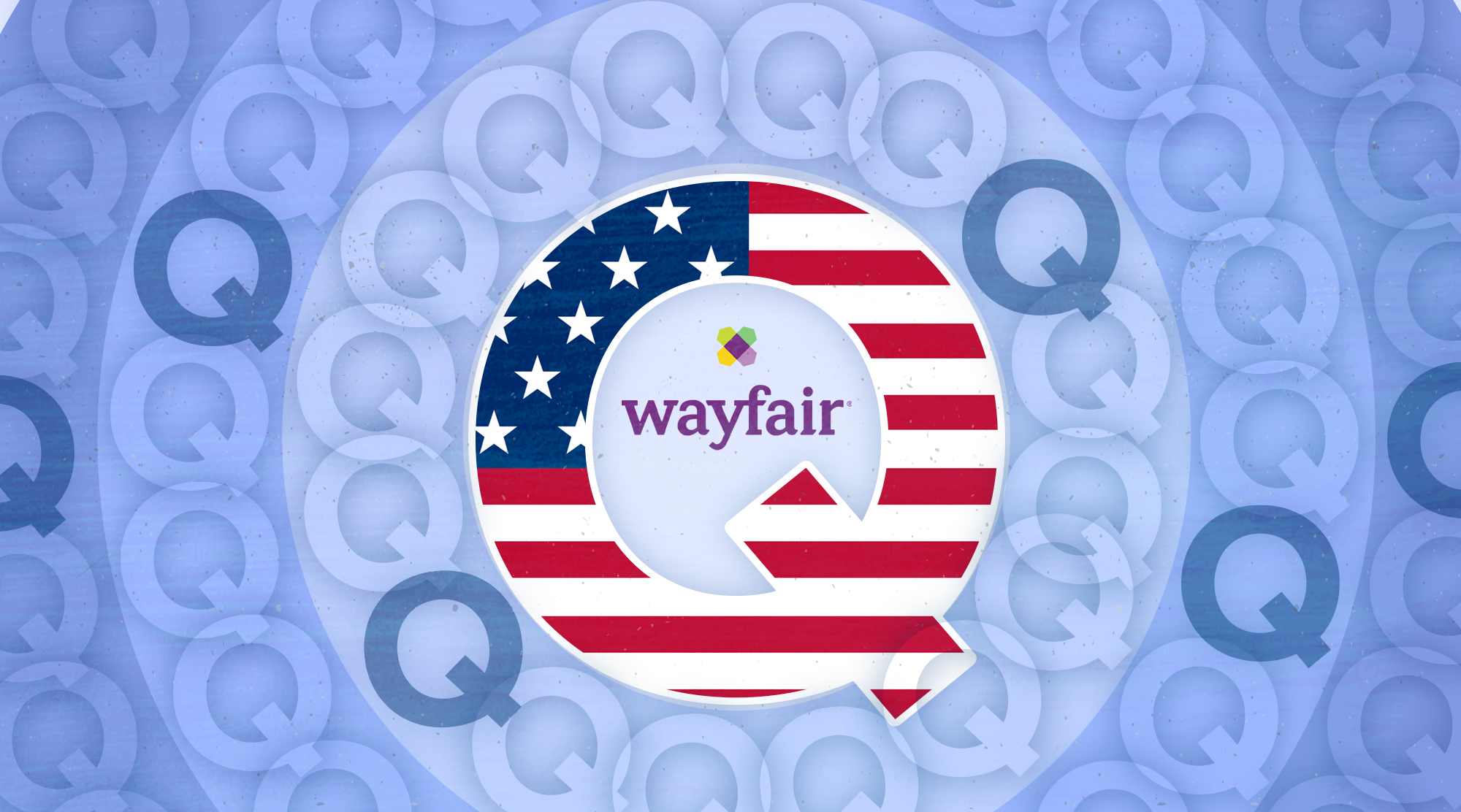 A story claiming that popular e-commerce site, Wayfair, was using ‘overpriced’ cabinets recently set the Internet alight. The theory originated from a post by PrincessPeach1987 on Reddit’s conspiracy subreddit. 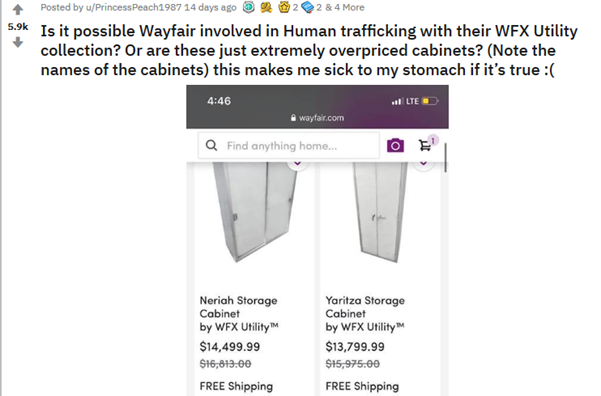 After nearly 6000 upvotes, 2.7k comments, and crossposts to other subreddits including pedogate, the post erupted across all social media platforms as users began conducting their own research (which mostly amounted to searching products priced high>low, finding items that didn’t appear to fit, and seeing if they shared a name with any entry on missing children databases), really hitting its stride the weekend after PrincessPeach1987’s initial post. As seen in the incredibly popular tweet below, the conspiracy found almost instant international appeal once spreading out of Reddit. 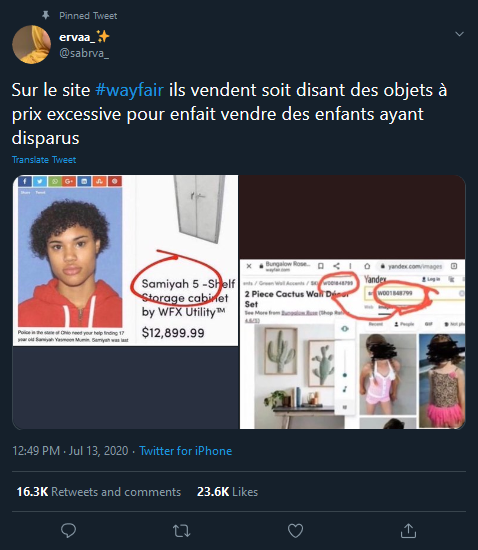 Much has been made of the fallout from the rapid viral spread of the conspiracy, from its huge popularity on TikTok to numerous fact-checks on the claim, but little seemed to stem the tide of videos being uploaded by an ever-growing community of amateur investigators. Even a supposed victim of this scheme appearing on Facebook live to let everyone know she was not, in fact, traded in plain sight as a piece of furniture or Wayfair themselves, providing a statement explaining the price discrepancies, could not slow down the conspiracy trending.

As journalists and netizens attempted to address the spurious nature of the evidence provided, more threads were then added to the conspiracy. One suggested that the girl in the video was forced to post her rebuttal.

Another prominent theory suggested to followers that going to Yandex (Russia’s major search engine) and searching the SKU for the cabinets provided proof of the trafficking ring, as pictures of children in revealing outfits were returned in image searches. Instead, since Wayfair’s SKUs included the letters ‘SRC’ and Yandex prioritizes Russian websites, users were unwittingly getting results from imgsrc.ru – a known hub of paedophile activity.

The staying-power of the Wayfair child trafficking conspiracy can be attributed to a number of factors. It found purchase on TikTok just as Pizzagate began to thrive on the platform, and the background radiation of Jeffrey Epstein and Ghislaine Maxwell cannot be avoided. However, this is eclipsed by the influence of the Internet’s conspiracy par excellence: QAnon.

At Logically, we monitored the conspiracy’s spread across Twitter from Monday 13th to Wednesday 22nd July which revealed an eye-opening evolution of how conspiracies rapidly spread through online subcultures and geographical locations. Importantly, it showed how QAnon moved in to fold the conspiracy into their sprawling narrative.

At this point, it must be noted that PrincessPeach1987 is not affiliated with QAnon, and beyond her post on conspiracy, appears to be your average Redditor, posting about tea from Trader Joe's and popular Netflix series.

The first thing we conducted was a hashtag co-occurrence map to see what was being mentioned alongside ‘#wayfair’ in tweets on Monday 13th. 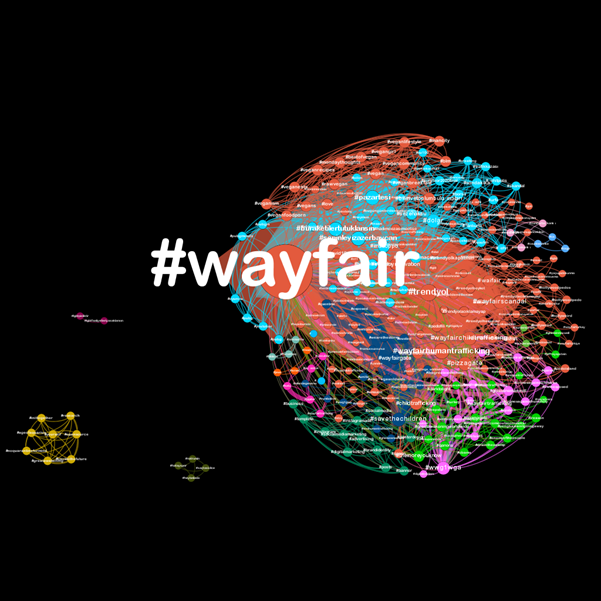 What we found almost immediately was a significant conversation happening in Turkish. It appears that after the initial Reddit post and a couple of incredibly viral Twitter posts on the same day, the ‘method’ of ‘child trafficking’ had also been spotted on Turkey’s own e-commerce site, Trendyol. Half of the orange section here and the entire blue cluster represents this purely in hashtags. 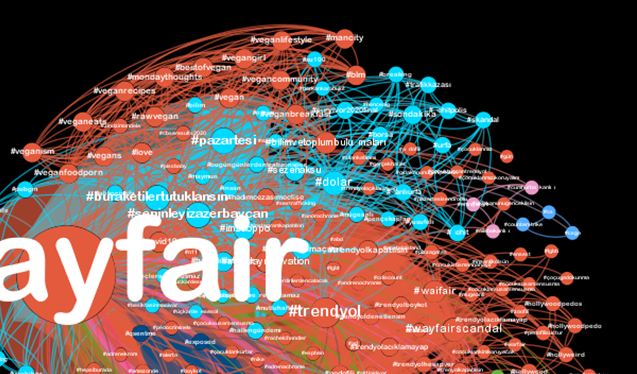 When doing further analysis of the full Twitter network, the sheer scale of the conversation becomes apparent. 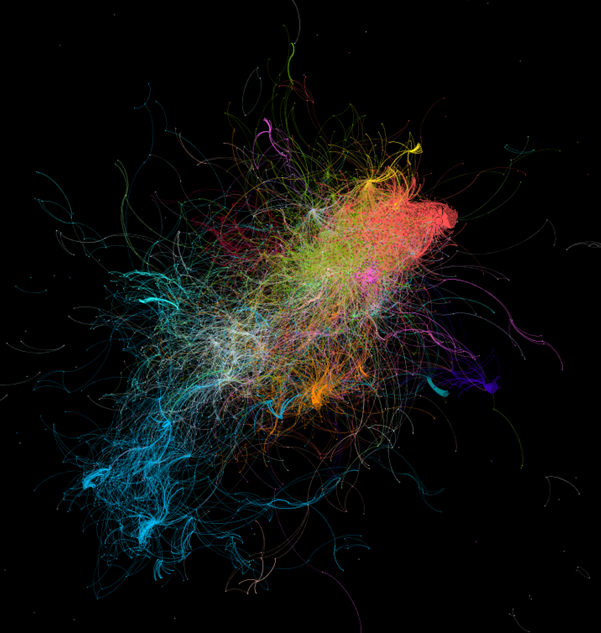 Everything past the blue clusters represents the Turkish spread of Wayfair conspiracies as of Monday 13th. We can see, when zoomed in, that this is dominated by tweets in the orange portion of the network, but the hashtag #trendyol marks a cutoff point far lower. 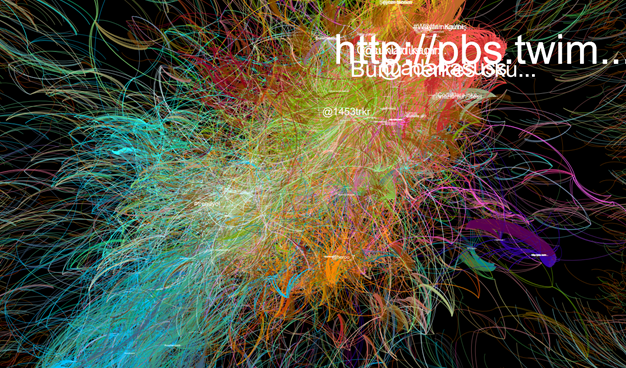 The larger links lead to a Turkish Instagram account that traded in health misinformation and existing conspiracies, picking up on Trendyol as the latest series of images.

Other accounts with low follower counts acted as clearing houses and aggregators for tweets about the conspiracy as it moved across Turkish Twitter.

This Turkish conversation serves as a useful metric to see how QAnon comes to dominate the conversation around Wayfair over the coming weeks. As we can see in the initial hashtag pull, on Monday 13th, QAnon’s presence is confined to a small portion of the network near the bottom. 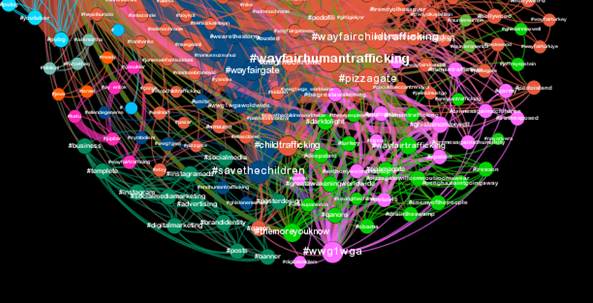 The dark green cluster represents spambots. QAnon is shown through the pink and light green nodes – their rallying cry of #wwg1wga forming a large node, as #savethechildren and #pizzagate act as bridges into the wider conversation. 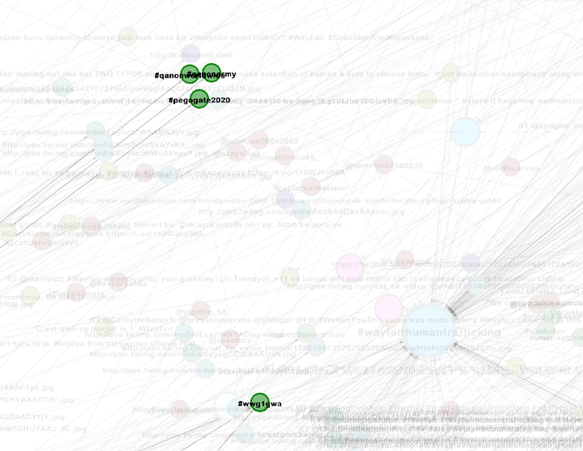 In the full network graph from July 13th, QAnon barely even features – drowned out within the wider western conversation in blue. The nodes have been made visible in our mapping software here:

On July 14th, the story is largely the same. Here is the full network map. 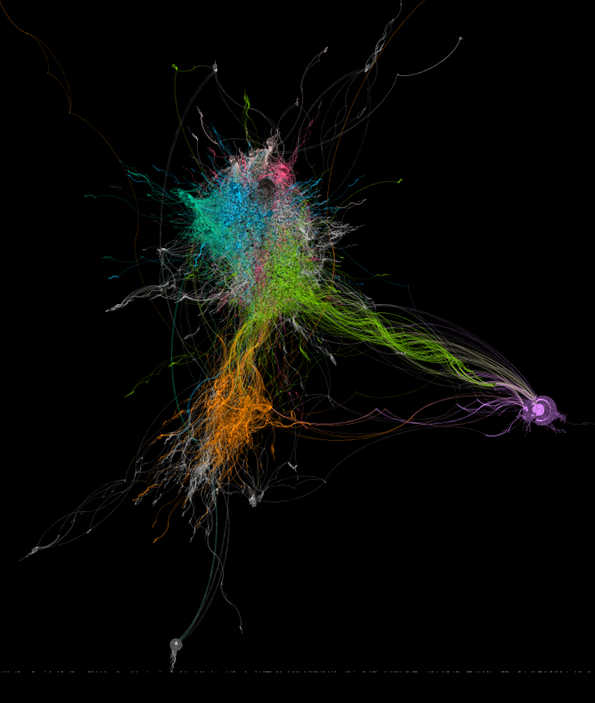 The Turkish conversation is, at this point moving to the fringes of the network – most notably in the purple cluster of wildly popular tweets. QAnon here appears to now have its shoes on when compared to the day before, represented by some of the pink nodes in the heart of the main cluster. The nodes have been made visible here: 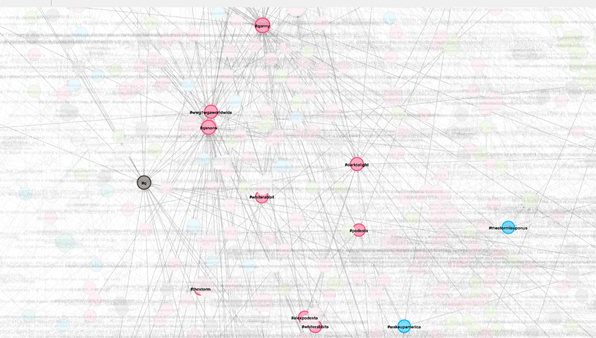 Importantly, the community begins to construct a campaign to use the Wayfair conspiracy to recruit – or ‘redpill’ – more people. QAnon power-user Tommy G posts an extremely viral video illustrating the conspiracy while maintaining a level of distance from direct accusation. 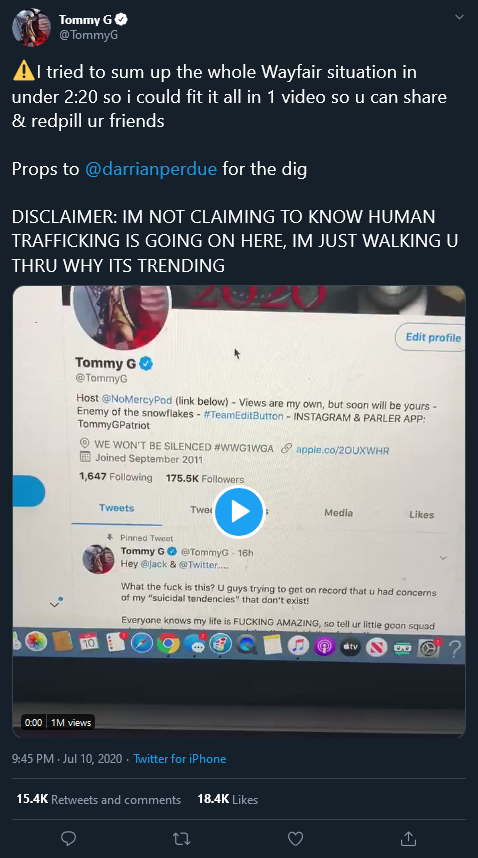 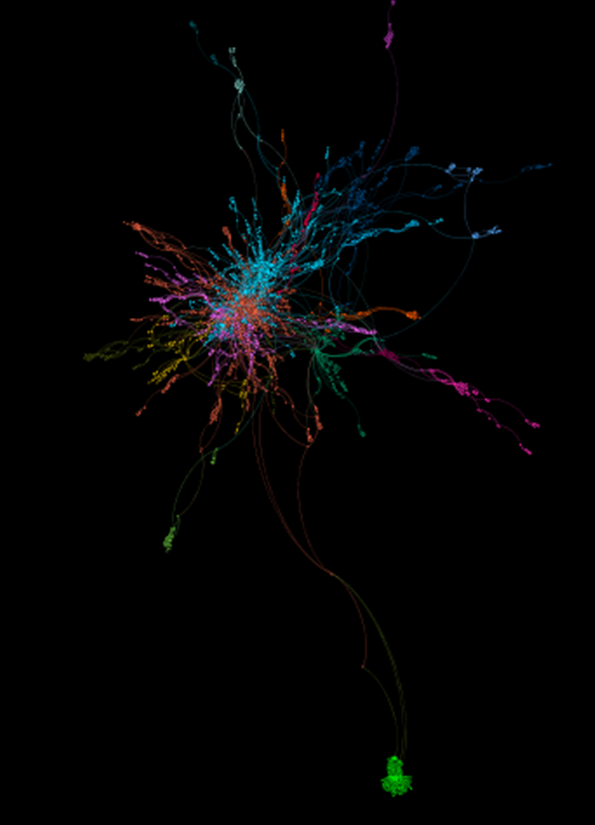 By the 15th of July, QAnon’s presence becomes far more noticeable. The blue section now represents the presence of the QAnon community in the Wayfair conversation as QArmy, wwg1wga, and other Q-associated catchphrases become more commonplace.

July 15th also seems to indicate when most of ‘normie’ Twitter begins to lose interest in the event, perhaps because fact checking and media coverage has, at this point, sucked any gravity out of the situation. The green cluster at the bottom of the graph represents the most viral tweet of that day which is, inevitably, a meme joking about the event. 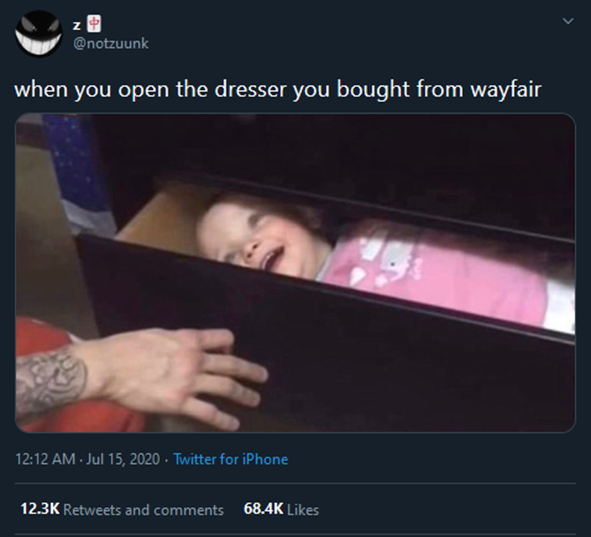 By now, QAnon’s dominance of the conversation is firmly established. 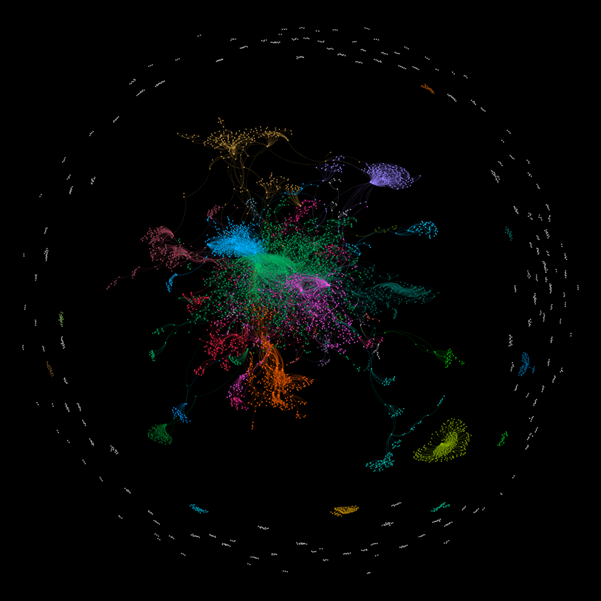 The green, pink, and blue sections are all chock-full of QAnon hashtags and accounts, as evidenced in the labelled graph. #wayfairgate absolutely dominates the twitter landscape. Turkish and other international conversations are pushed to the fringes of the map.

Fast forward six days, and the QAnon assimilation of the Wayfair conspiracy into their conversation is complete. 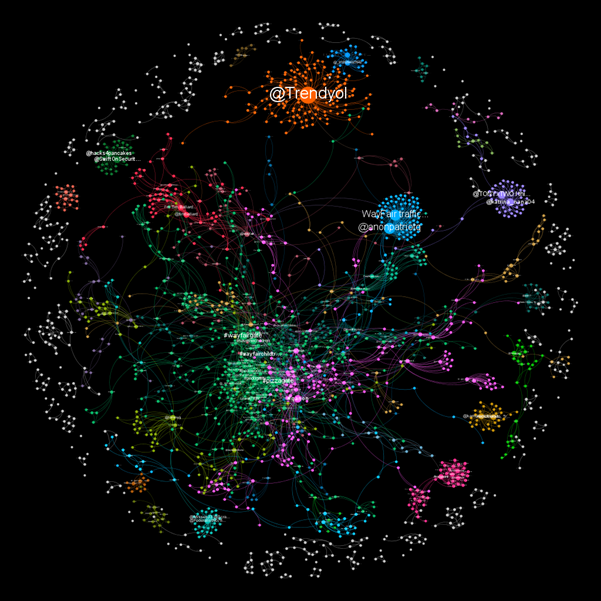 Turkey and the Trendyol scandal is relegated to a distinct orange cluster at the top of the graph. Many of the tweets giving this node its prominence are messages to Trendyol’s official Twitter account regarding customer service issues, too.

The rest of the conversation is pure QAnon. Zooming in, we see a litany of QAnon talking points, and #wayfairgate is now sat comfortably alongside #pedogate, #pizzagate, and #wwg1wga. 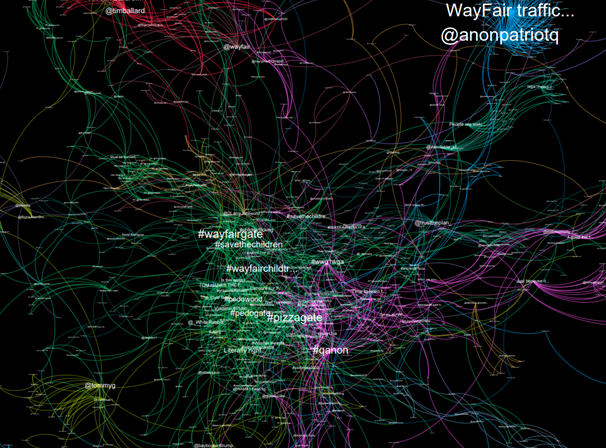 QAnon’s control of the conversation now affords them the position to gently nudge and steer users discovering the conspiracy to their partisan and politically driven beliefs, using the salacious and alarming accusation of child trafficking to then ‘redpill’ the rightly concerned or just curious into accepting the movement’s more radical ideas.

The War on Trust

It is hard to capture exactly, twenty years later, how abruptly the long 1990s collapsed into the War on Terror in September 2001. Public opinion polls capture it a little. In the face of abrupt tragedy, symbolically seen as an assault on the nation...