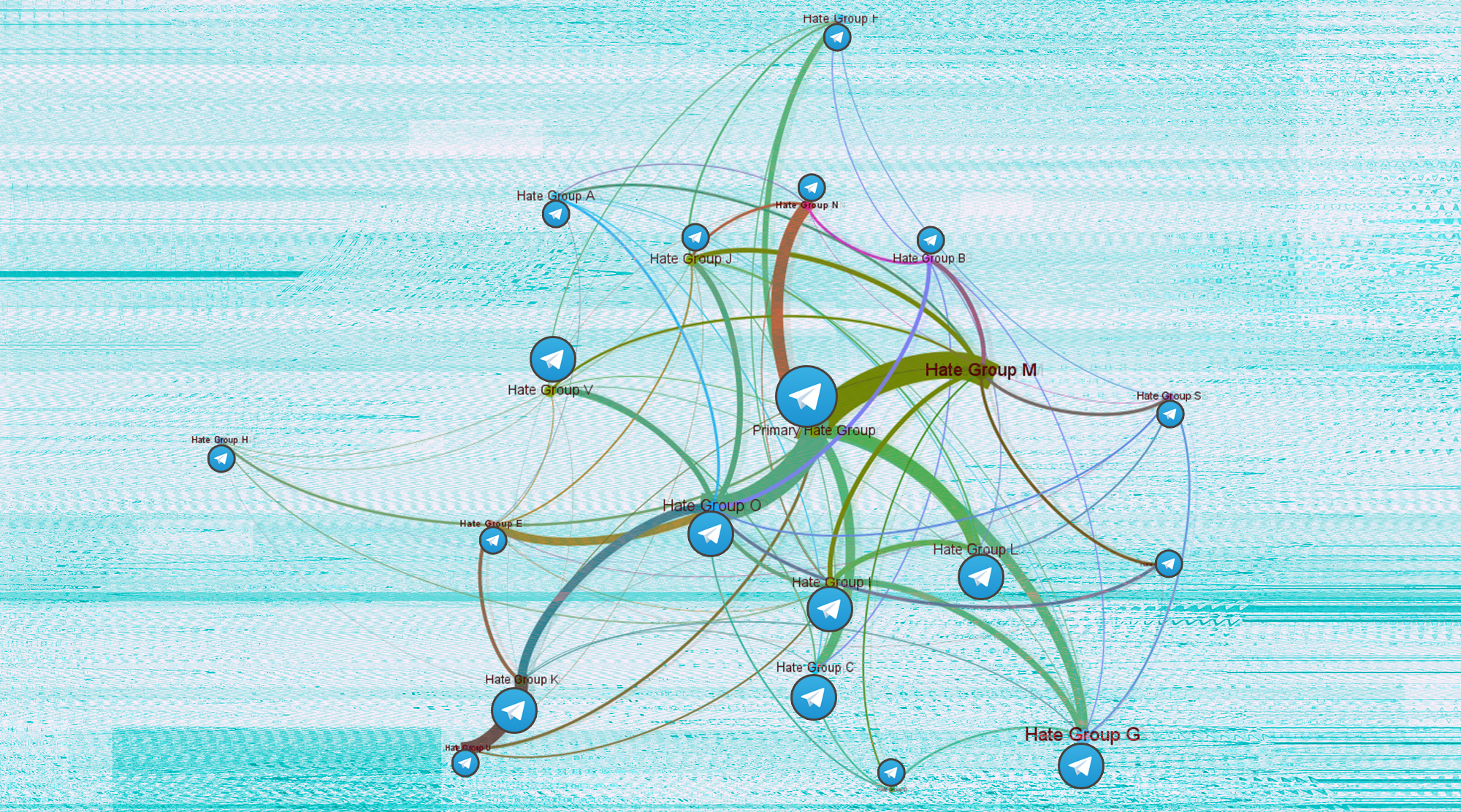 A cluster of Telegram channels is coordinating disinformation targeting India’s Muslim population with each channel amplifying a specific conspiracy theory, a Logically investigation has found. These channels are named after the Islamophobic narrative they focus on, creating a repository for false and majoritarian disinformation.

Over the course of the investigation, we discovered 19 such channels, two of which were suspended. The subscribers ranged from 1,000 to just four. The description of each channel also includes multiple links to other channels belonging to the cluster that is spreading rhetoric.

This investigation is a case study providing an outline of developing extremist architecture on Telegram that is coordinating efforts to push specific narratives. Although it has a relatively small user base, it has the potential to grow  exponentially.

The channel names have been anonymized and subdivided into two categories to avoid amplification of extremist rhetoric: a Primary Hate Group with 1,024 subscribers that posts the bulk of such content and multiple Hate Groups on which such content is consequently forwarded and shared. The identified cluster serves as an example of how extremist groups workshop narratives, seeding content and then forwarding with the ultimate aim of some narratives going viral and others being allowed to recede with time. 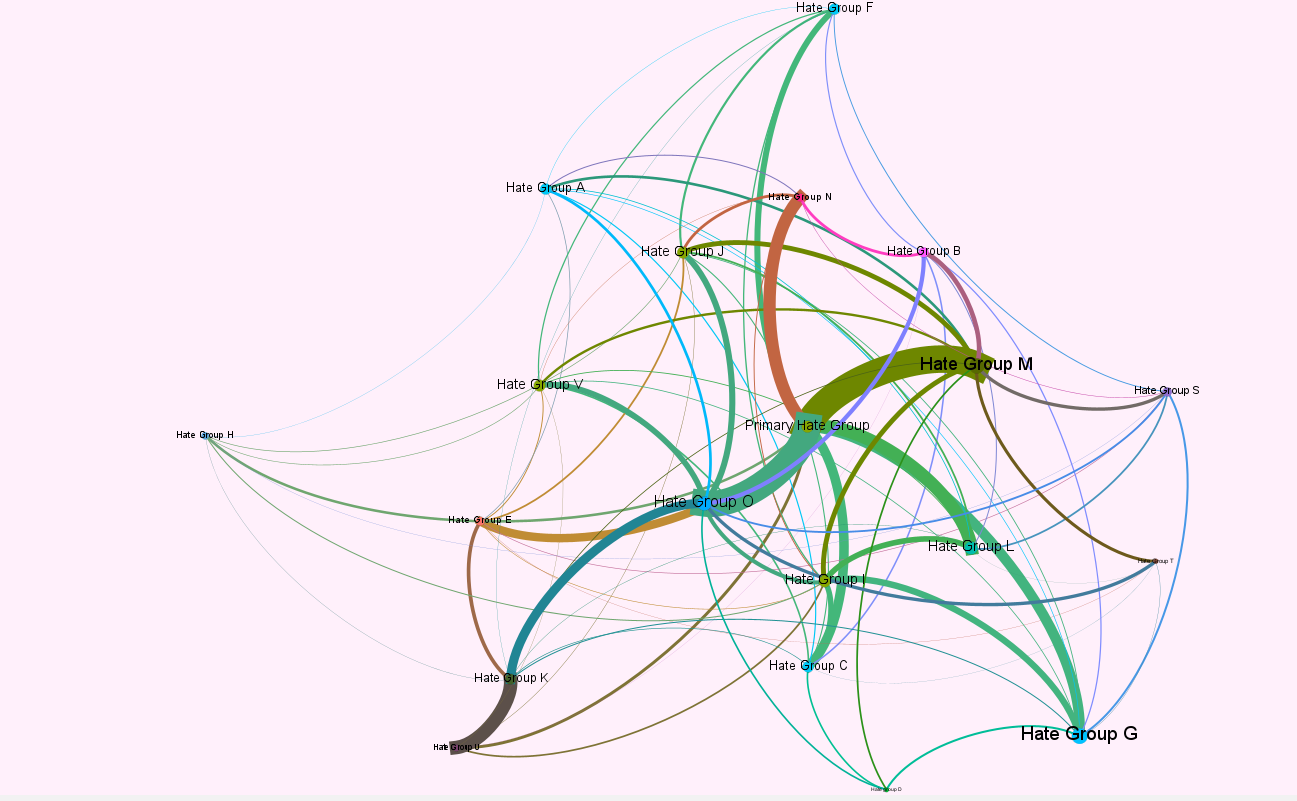 Gephi network map illustrating the extent of interaction across the 22 channels based on cross- posting and forwarding of content.  The thicker lines between each group show more coordination. (Source: Gephi via Joe Ondrak)

Data from timestamp analysis and Gephi network analysis revealed that there is a coordinated behavior in amplifying the content posted across the cluster. Screenshots from the identified channels demonstrate that the content originating from a channel is posted across the whole cluster at the same time.  The Gephi graph's border lines illustrate the amount of interaction between the channels, which supports the coordinated activity operating within the cluster. Although we cannot determine whether the accounts are operated by a single person or a group of people working together, the identified channels boost each other and heavily share posts to other channels. As these channels form a network, with messages being forwarded between them, there is likely an overlap of members of some channels.

One channel at the center 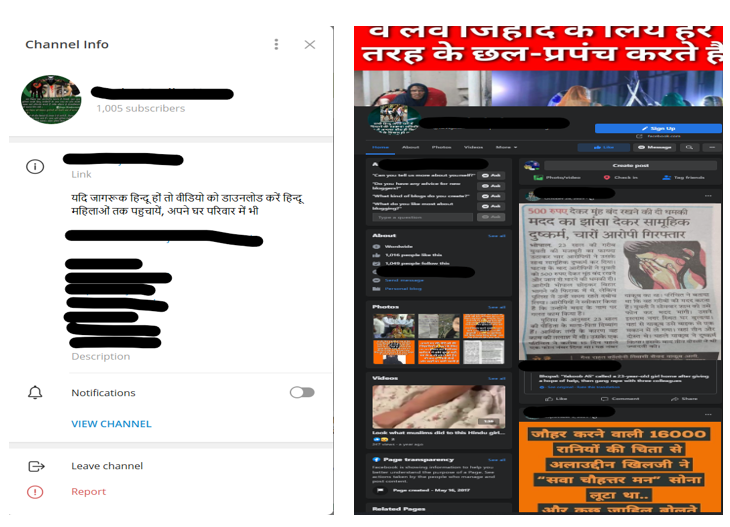 Telegram bio of the Primary Hate Group, as well as the associated Facebook page. Text in Telegram description: If you are awakened Hindu, download this video, share it with your family. 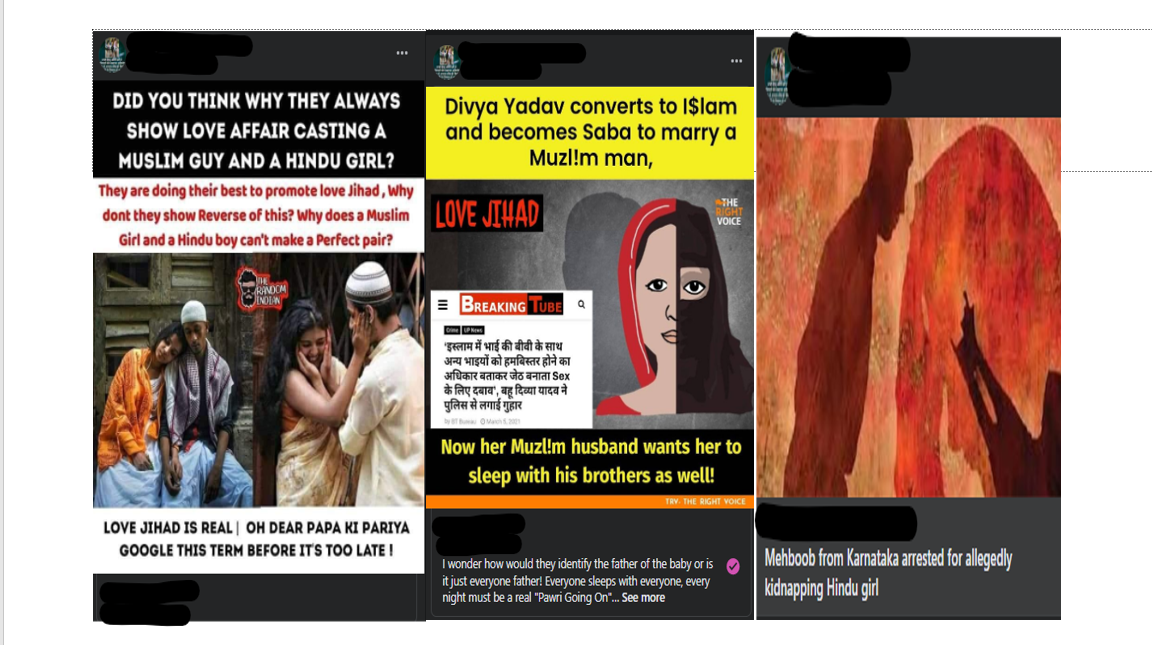 Anti-Muslim propaganda in the form of images and videos with descriptions of love jihad has been circulated in both Hindi and English since the group’s inception. An example of such content includes pointers detailing how Muslim men “lure” Hindu women, encouraging it to be shared with all non-Muslim parents.

The 16 points detailing the sequence of events begin with claims that boys take teenage girls on bike rides, following which they are “trained to make girls sexually aware,”and these private moments are videotaped without consent. It ends with the narrative that girls are threatened to continue the relationship and their resistance is met with being “jailed inside the house without a mobile.”

In addition, the channel's content includes links to OpIndia and Sudharshan TV, which are known for spreading fake news aligned with Hindutva ideology. Between September 3, 2021, and March 11, 2022, the channel amplified links from the aforementioned outlets 62 times, re-iterating the role played by right-wing outlets in providing extremist content a veneer of legitimacy.

Examples of links to OpIndia and Sudarshan Tv have been published in Primary Hate Group (Source: Telegram)

By delving deeper into the archived data and comparing the number of messages forwarded from one channel to the number of forwards received by another, we discovered that the channel “Primary Hate Group'' stood out.

The total number of forwards from this channel was 2,755, indicating that it is responsible for the bulk of content cross-posted across the identified cluster. To investigate further to see any activity of coordinated inauthentic behavior that may exist within the cluster, the content that was shared across the channels was subjected to timestamp analysis. 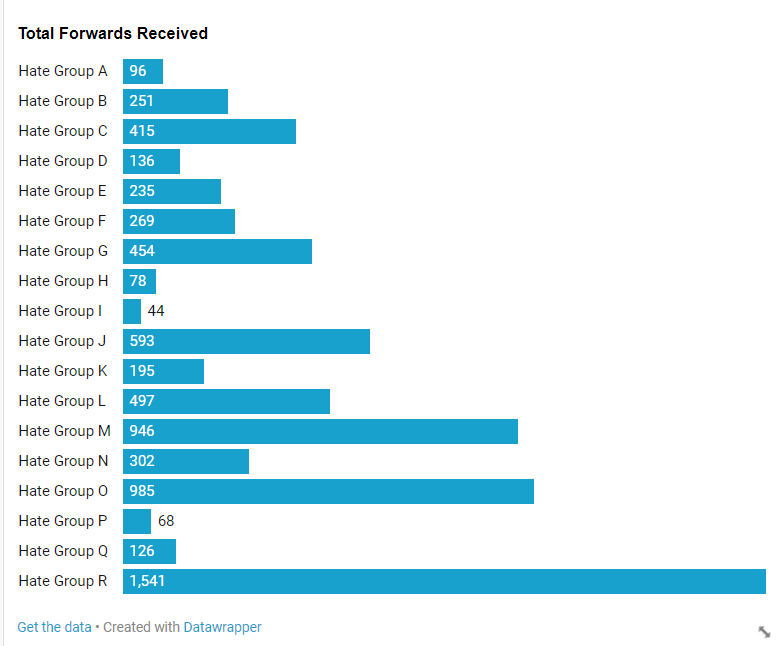 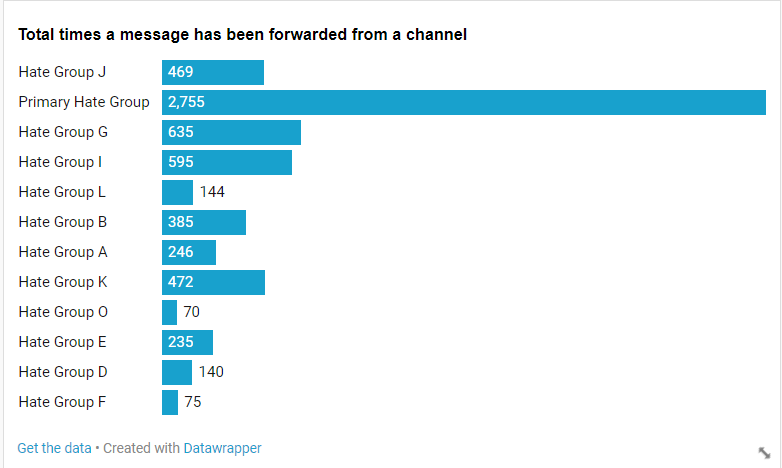 Screenshots of content originating from Primary Hate Group that was cross- posted across the cluster at the same time (Source: Telegram)

There are 4,648 subscribers to the 19 channels that have been identified. Apart from the Primary Hate Group, which concentrates on the love jihad narrative, the Secondary Hate Groups disemminate content with specific agendas such education jihad, land jihad and denouncing Halal meat. The following are examples of some channels from this cluster pushing targeted propaganda. 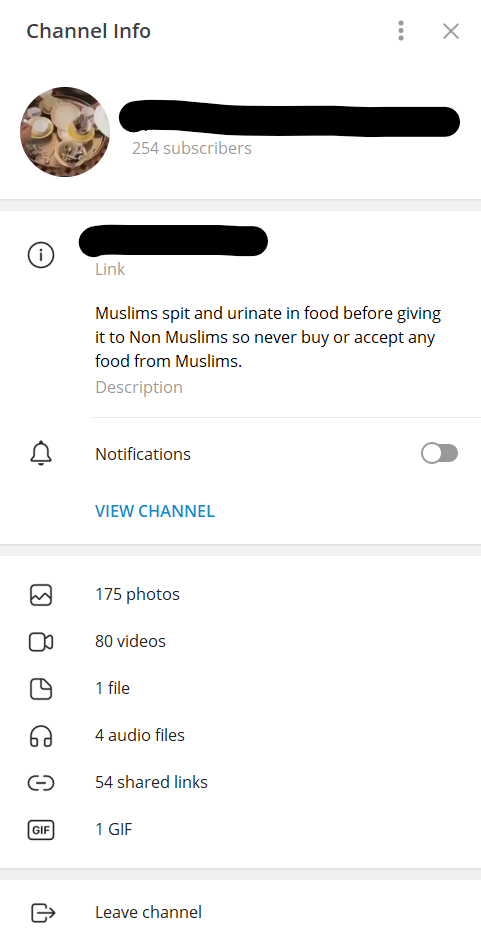 Hate Group A, established in March 2020, aggressively pushed hate rhetoric picking the thook (spit) jihad narrative — a conspiracy theory that Muslim restaurant workers spit in the food they prepare. It has routinely been used by extremist Hindutva ideologues to stoke pre-existing tensions in the digital space. On the onset of COVID 19 pandemic extremist Hindutva groups amplified narratives centered around “thook jihad”. More recently, actor Shah Rukh Khan was accused of spitting on the mortal remains of singer Lata Mangeshkar while offering prayers.

These posts are carefully crafted with images and videos, with the content published on the channel calling for a boycott of Halal food, Muslim hotels, and packaged groceries. Posts in the channel go on to condemn the use of salons and hospitals run by Muslims.

Text on left image: Muslim adds his urine to biryani before selling it to Hindus

Text on center image: Muslim shopkeeper infected food with coronavirus by blowing on it 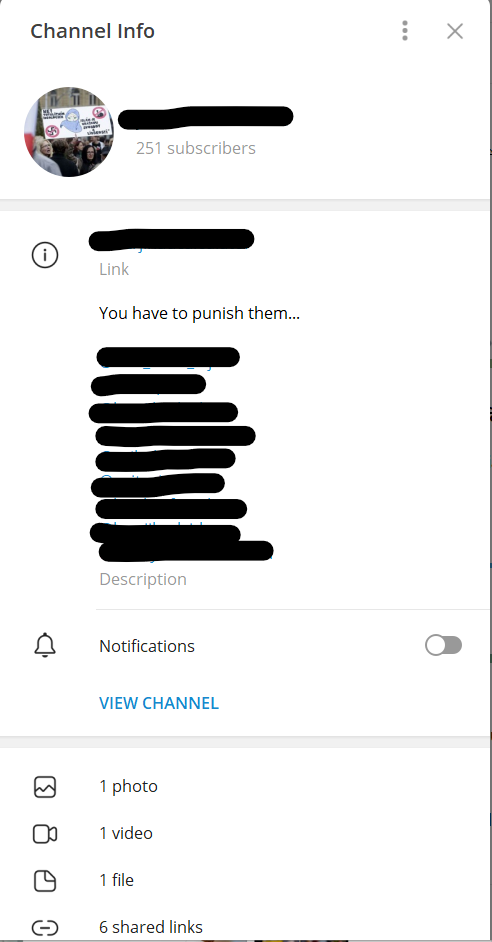 Channel info of Hate Group I. Groups description reads “you have to punish them”.  (Source: Telegram)

Hate Group I, established in August, 2020 conducts hate polls against various Muslim customs and practises. One such poll in the channel asked readers about a kind of bullet made to shoot “Muslim terrorists”.

Examples of polls held in Hate Group I to incite hatred against Muslims (Source: Telegram)

The viewers were offered two options: a) JIHAWG and b) don't know. JIHWAG bullets first surfaced in 2013, when a U.S. based company launched them as a product.  The polls on the channel are presented in both Hindi and English with the intention of fostering hatred against Indian Muslims. 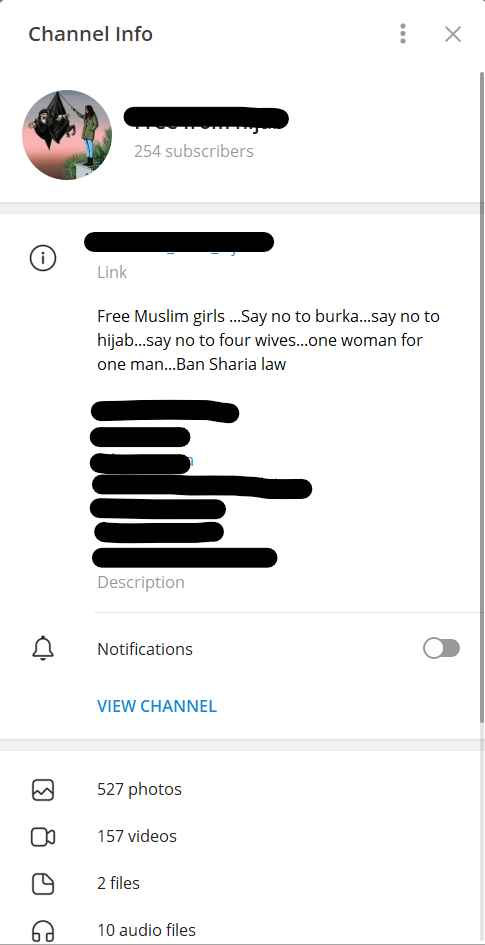 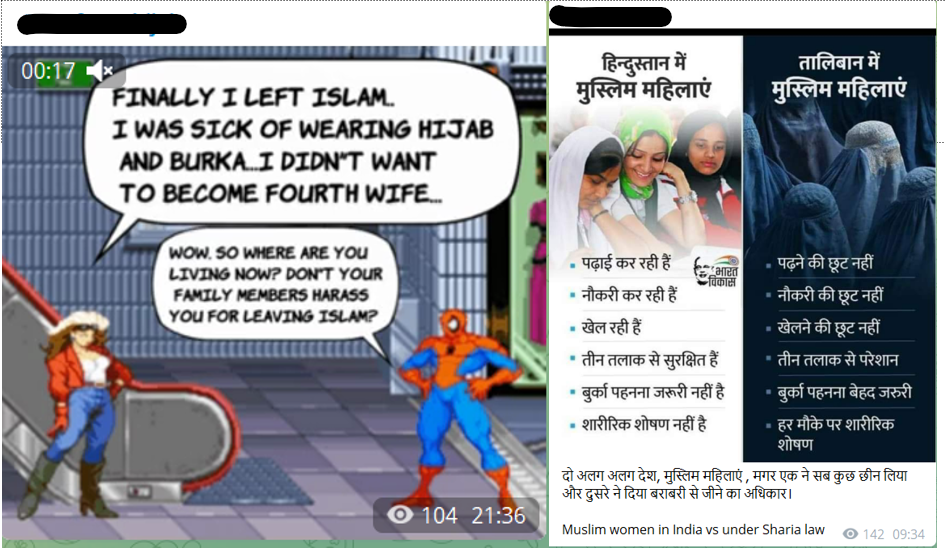 Hate Group G, established in September, 2021, is committed to disseminating propaganda targeting burqa and hijab customs. According to the channel’s bio, Muslim women should be free of the burqa, hijab and Sharia law. One of the posts published on the channel claims that the only way for Muslim women to be free is for them to elope and marry a Hindu male. The images and videos posted in this Hate Group are aimed at Muslim women’s attire.

While the 19 channels were all public channels with small user bases, the number of people who may access or may have accessed the channels publicly is indeterminable given Telegram’s user base and cross posting.  The narratives are designed to concentrate on specific events.

Unlike WhatsApp, Telegram channels can have up to 200,000 members with an unlimited number of participants enabling propaganda gaining traction. The platform's file storage feature makes it easier to store vast libraries of multimedia that can be shared with ease. Telegram’s feature to create public or private encrypted chat can be exploited to recruit members.

The rise in sectarian narratives has made India sensitive to disinformation and hate content. There have been several reports of individuals getting radicalized as a consequence of disinformation and hate narratives and then participating in violent hate crimes. The 2017 murder of Mohamed Afrazul in Rajasthan is a typical example of such online disinformation causing offline harm. According to the charge sheet, the murderer had acquired online material on different aspects of Hindutva fanaticism, love jihad, and other topics that prompted him to commit the crime. The Wire report describes Sudesh Thakur, an electrician and member of Hindu Raksha Dal, as a victim of internet radicalization by his surroundings. He was broadcasting live recordings on Facebook during the Delhi riots in February 2020. According to the report, Thakur claimed he gathered his current news from Sudarshan News which is known for spreading communally divisive misinformation. People who hold a different sense of nationalism, according to Thakur, should be slain without hesitation.

Enabled by deep internet penetration, the increasing use of such messaging platforms has been reported to act as a catalyst for violence. Speaking about the speed at which information passes on Whatsapp, BBC News research found such content is drawing like minded people together in a tight network that has enabled “mobilization in the cause of violence.”

Digital communities have previously been formed around a specific ideology, such as extremist communities like QAnon.  Telegram has been downloaded 220 million times in India since 2021, accounting for 22 percent of all downloads globally. Particularly of note in this cluster is the use of different channels for different narratives as a methodology. We know that narratives such as love jihad have previously had significant influence online, but the wide ranging strategy of seeding several different narratives over a coordinated system of channels is not one we have seen before. The users behind this cluster are able to monitor their content to see which narratives pick up and which do not. Such a close network of Telegram channels workshopping Islamophobic disinformation narratives to achieve escape velocity on wider social media platforms has the potential to spawn the next big conspiracy theory.

Double Check: Why Does The Most Vaccinated Country Still Have COVID?

In the first week of May, stories about the rising number of cases in Seychelles — one of the world’s most vaccinated countries — started surfacing.