How Media Drove Conspiracies About the Burari Deaths 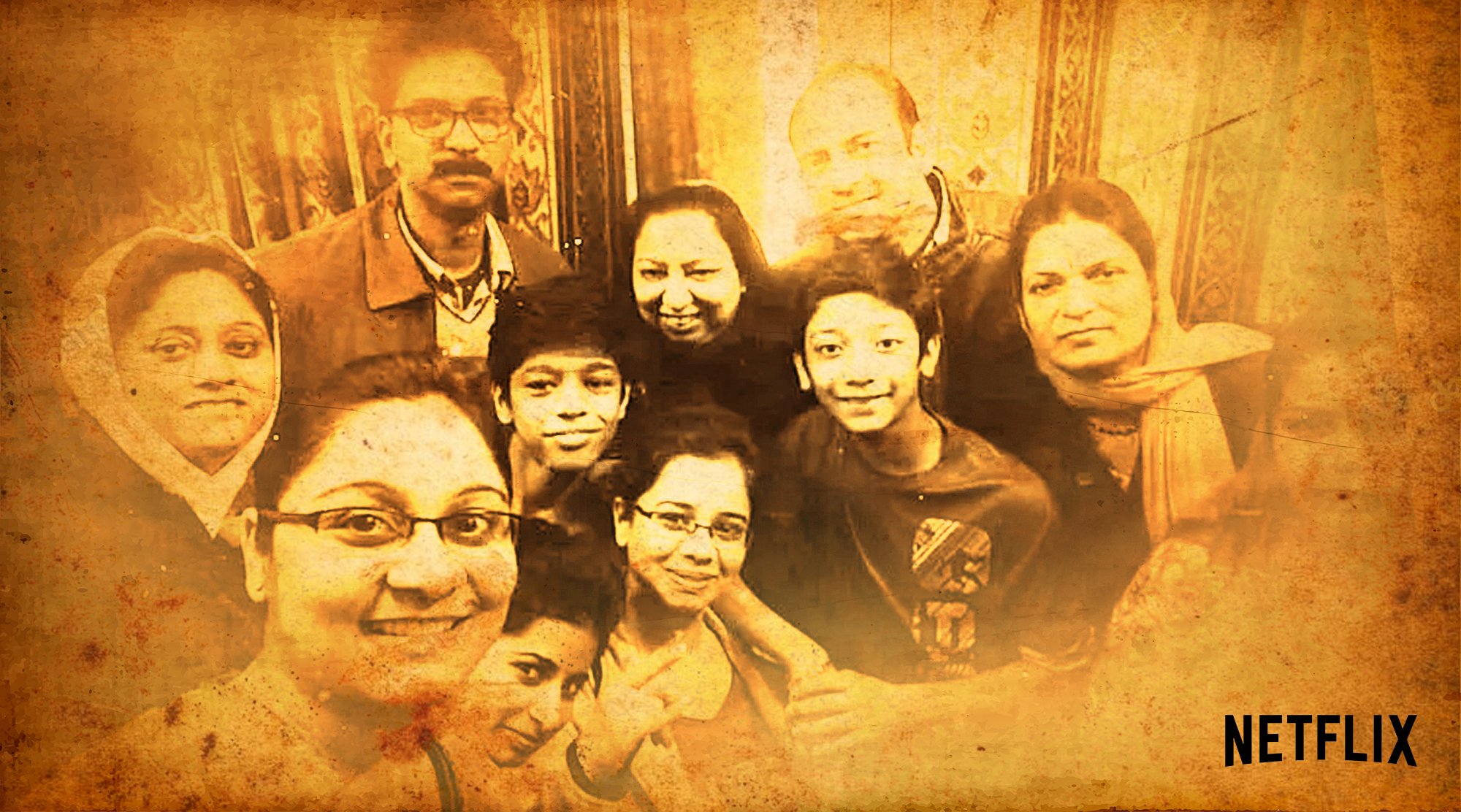 The strange case of the Burari deaths was finally closed by Delhi police at the end of October. No signs of foul play, they concluded — the 11 members of the Chundawat family had killed themselves in a deadly ritual from which they believed their dead father would save them. Originally investigated as a murder, it became clear that the family, unbelievably, had done this to themselves.

I remember being drawn to the case when I found out that one of my batchmates from journalism school, Hemani Bhandari, was covering the case for a national newspaper. When I found out more recently that she was one of the interviewees in the Netflix docu-series, it piqued my interest in the incident once again, and I finished watching the show in one go. What stayed with me after I finished watching it was how the lack of sensitivity, empathy, and the proclivity for sensationalism displayed by much of the media at the time created an echo chamber of absurd conspiracy theories. Given the attention that the deaths of the Chundawats garnered, an ethical and humane coverage of the incident could have set in motion a dialogue about the stigma that surrounds mental health issues and the tragedies that can ensue if left untreated. As a journalist, I was intrigued to know about my batchmate’s experience of reporting this incident without straying into sensationalist territories.

The surreal incident took place in July 2018, when all 11 members of the Chundawat family in north Dehli’s Burari were found dead. Ten members of the family were found hanging in the living room of their house, their hands and feet bound with rope, their mouths gagged, their ears stuffed with cotton, and blindfolds across their eyes. The oldest family member, the grandmother, was found strangled in another room. Their bodies were discovered by neighbors, and within a few hours, people thronged the spot and climbed on rooftops to get a better view of the house. Even Chief Minister Arvind Kejriwal made an appearance at the scene.

Unsurprisingly, the case dominated national headlines for weeks. Conspiracy theories that originated on social media made their way to news channels, and every single detail that came out of the investigation became fodder for more conspiracy theories. For months the investigating agencies unsuccessfully tried to put together the pieces of the puzzle of how every single member of a seemingly normal and educated family killed themselves in a meticulously planned way. With every bottleneck in the investigation, the incident was given several labels – murder, suicide, or a cult ritual that ended up in an accident. As time passed, the media frenzy dwindled and the incident vanished from the news cycle but the trail of unanswered questions remained.

On October 8, Netflix resuscitated the Burari case discourse through a docu-series titled House of Secrets: The Burari Deaths, directed by Leena Yadav. The show reopens the case file with testimonies of forensic experts, journalists, police and friends, relatives and neighbors of the Chundawat family and takes viewers through minute details around the incident, how the investigation panned out, the genesis of the various conspiracy theories but without any tinges of sensationalism. Most importantly the show drives home the message of how voyeuristic coverage of such cases catalyzes the spread of bogus conspiracy theories and shifts the focus away from pertinent issues like mental health and the far-reaching effects of emotional trauma if left untreated.

In September 2018, it was reported that the Central Bureau of Investigation had conducted a  psychological autopsy of the eleven people who died and based on that the CBI confirmed that all of them had committed suicide. The CBI said the family members died while performing a ritual that they believed could make them meet the family’s dead patriarch and they had expected they would be saved by him when they hanged themselves.

“The psychological autopsy conducted by the CBI is consistent with our findings. It confirms that for over a decade, one of the family members, Lalit Bhatia, had been writing on or dictating ritualistic practices to other relatives,” a senior investigator was quoted as saying by the Hindustan Times. A set of 11 handwritten diaries maintained over a period of eleven years revealed that Lalit believed himself to be “possessed by the spirit” of his dead father. He had created a cult-like structure in the family who obeyed him unquestioningly and shared his delusions. The family believed that the spirit of the patriarch of the family, who had died in 2007, was guiding them through Lalit.

Psychological autopsy attempts to study a person's mental state by analysing medical records, interviewing friends and family and conducting research into their state of mind prior to death, the police told the media. The Delhi police had also been seeking inputs from psychologists before the CBI submitted the reports of the psychological autopsy. A Delhi police official anonymously told the Hindustan Times, “Our interaction with psychologists has indicated that the family could be suffering from ‘shared psychotic disorder’ in which all the members in a group do the bidding of their leader, as they trust them unconditionally and believe they would be led out of the worldly problems,”

Others from the psychology community in India also concluded that the family may have been suffering from ‘shared psychosis’. Dr Roma Kumar, a Delhi-based clinical psychologist who was also featured in the Netflix docu-series explained ‘shared psychosis’ in an interview with The Better India. She said, “Shared psychosis or ‘the madness of many’ is a disorder that happens in groups of people who are closely involved with a person having a psychotic disorder. The leader of such a group lives in a delusional world and often transfers his/her delusions to others around, who follow him.”

Hemani Bhandari, who was then crime correspondent at The Hindu, recalls being on leave the day that the incident took place. “I reached the spot on the second day. It was extremely difficult to get past the crowds, and by then the ‘11 people 11 pipes’ conspiracy theory had started doing the rounds. So there were 11 plastic pipes protruding from the right side of the wall. Four of the pipes were straight and seven were bent in a different direction. The neighbors correlated this with the fact that four of the dead were men and seven were women. By then TV channels had already started talking about the mystery of the pipes.”

The 11 pipes theory went on for a while and primetime anchors even discussed whether the pipes were built to allow the passage of 11 ‘souls’. There were other wild theories that were picked up by the media, especially the television media and the Netflix show also touches upon them. Bhandari recalls, “A TV reporter spoke to a neighbor who said the family followed a godman and there was a lot of discussion on Twitter about this. In India, the media landscape is such that TV channels cannot get screen time especially in cases like these without injecting an element of sensationalism. I feel that the print media coverage was largely devoid of this luridness except for one instance where a newspaper which I cannot name published a story about Lalit buying ten mobile numbers all of which added to 11. When I spoke to the shopkeeper mentioned in the story, he denied it and said Lalit had only come to recharge his cell phone.”

When one fabricated detail shared by the media has the power to change the direction of an investigation, and even cause public sentiment to influence the decisions of investigators and authorities, journalists have little room for errors. However, the pressure to be the first to report the latest updates blurs the line between truth and speculation. “Reporting a story based on second-hand information is risky in the age of social media. This was such a case where the audience was ravenous about getting every new detail. When the Burari deaths took place, I had been covering crime for over a year and I had access to police officers who were investigating the case. They told me that the 11 pipes had no bearing on the investigation and were not related to the deaths in any way. You have to speak to people directly involved in the investigation to be able to report objectively and with sensitivity.”

Bhandari says that the revelation of the family suffering from shared psychosis brought clarity but it also offered a glimpse into the acute lack of awareness about mental health problems in India. “Till then we were going round and round thinking what could force an entire family to do something like this. People like us who are privy to the seriousness of mental illnesses found closure in this finding. But when I spoke to the neighbors they couldn’t fathom the family was mentally ill because they seemed like any other normal, functional family. People believed that Lalit was haunted by his father’s spirit, which is a very normal reaction in India, and that theory is more believable than shared psychosis.”

After my chat with Bhandari, my mind drifted back to June 2020, when a renowned Bollywood actor died of suicide. As someone who had just started working in the misinformation/disinformation space, I had followed the media circus that ensued his death. The absolute denial that he could have been suffering from mental illness and the blind belief in the conspiracy theory that he was murdered by an elite cabal in the film industry resembles the situation after the Burari deaths. The end result is the same — rushed reporting led to conspiracy theories, which led to a refusal to acknowledge the cost of mental illness. In both cases the media frenzy created ample opportunity to misinform. Careful reporting sometimes turns up less lurid results, but it’s important to both be fair to the people our stories involve, and to make sure we don’t inadvertently start a conspiracy theory of our own.

Over the last month, we reported how US president Donald Trump began to promote the drug hydroxychloroquine as a miracle coronavirus cure after seeing a segment on Fox News; we also reported how Trump has politicized the drug since then, using it to