Tradition vs. Activism: Why Have Hindu Festivals Become A Battleground? 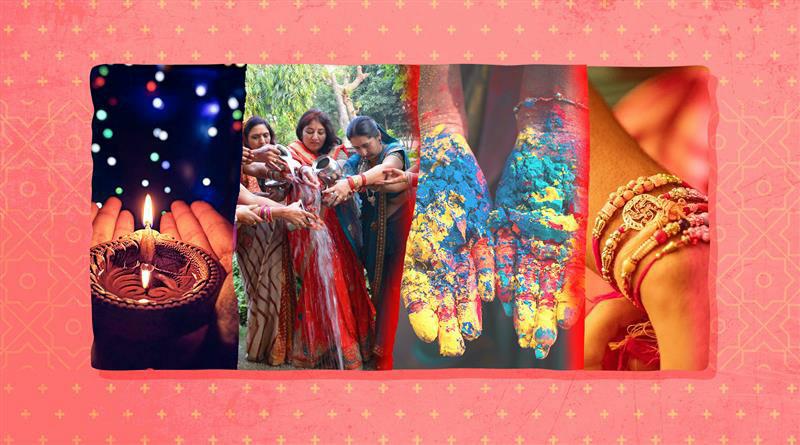 Every year, an image of India is circulated on social media, accompanied by text claiming that it was taken by NASA during Diwali. In truth, the picture is photoshopped, it’s most likely the outcome of different overlaid photographs taken by the National Oceanic and Atmospheric Administration to highlight population growth. While it is accurate that the picture shows lights, it has nothing to do with the festival of lights.

The image was first shared by social media user Vishnu Sharma in 2011. Over the years, multiple media outlets have clarified that, although there is a NASA image of the country on Diwali in 2012, the image only shows city lights, and any extra light produced during Diwali is so subtle that it is imperceptible when observed from space. Nevertheless, the image pops up in WhatsApp family groups every year as a symbol of Diwali’s grandeur.

While the NASA image is harmless, conversations around festivals on social media have ironically become a breeding ground for bigotry. Criticisms and counter-criticisms laced with ample amounts of propaganda on the norms of celebrations of the biggest Hindu and Muslim festivals crystallize into a polarized political discourse.

On November 4, the day Indians celebrated Diwali, OpIndia, a right-wing propaganda platform with a record of publishing fake news and anti-Muslim commentary, announced that it was launching a campaign called “Mission Loud and Bright Diwali”. According to the site, the campaign will involve “a legal battle, activism and research to try and ensure that Diwali 2021 is reclaimed from the clutches of misplaced curbs.”

OpIndia’s move is apparently in reference to the ban on firecrackers. This ban was ordered by the National Green Tribunal before Diwali  in response to alarmingly high pollution levels and a rise in coronavirus cases. While firecrackers are not solely responsible for the hazardous air quality in Delhi and neighbouring states during the winter, their contribution is significant.

Discussions about other festivals follow the same pattern: the problematic aspects of festival celebrations are lost in oblivion as discussions turn into a display of the political ideologies of the participants.

For instance, the #MeToo movement turned the spotlight on the vulnerability of women in India, causing victims of sexual assault to open up about their experiences. Many women then recounted experiences about feeling unsafe during Holi celebrations because they were groped or harassed by men under the pretext of throwing coloured powder or splashing water using an age old phrase: “Bura na Mano Holi Hai!” (Don’t take offence, it’s Holi!)

In March 2018, female students and professors protested against harassment during Holi outside the Delhi Police Headquarters. But, as is the case with Diwali, the concerns shared by many women about the festival being a convenient excuse for men to breach the lines of consent have been perceived as a deliberate “Hinduphobic” attempt by left factions to vilify the Hindu festival.

The Hindu khatre me hai (Hindus are in danger) fear also plays out during other Hindu festivals. Karwa Chauth, in which a woman observes a day-long fast for her husband’s long life, and Raksha Bandhan, a tradition that is rooted in the belief that a brother is supposed to protect his sisters, have been called out for pushing regressive patriarchal tropes. But questioning such traditions has evoked the response that left-leaning voices are conspiring to demonize the festival and exaggerate women’s discomfort with the event.

There are also questions on the ecological impact of Ganesh Chathurthi and Durga Puja celebrations, in which the idols of gods and goddesses are immersed in water bodies. The subsequent rebuttals from people who defend the traditions are reminiscent of those who defend bursting firecrackers during Diwali.

It is also important to note that those who question the norms of how Hindu festivals are celebrated, are almost always rebuked for not raising their voices against animal slaughtering during Eid.

According to Dr. S. V. Srinivas, a professor at the School of Liberal Studies at Azim Premji University in Bengaluru, the political deployment of religious symbols and icons is nothing new, though Indian mainstream media has become a major force behind this. “Media’s role in mobilization using cultural and religious resources goes back to the early twentieth century print culture. Indians have had a long history of taking and giving offence. What is new is near universal access to the media and a well-oiled public machinery mostly controlled by the right.” Srinivas adds that, since politics thrives on mobilization of anger and fear, propaganda machines relentlessly orchestrate such campaigns on social media.

While Srinivas highlights that right-wing politics in India has more consciously and systematically drawn on cultural and religious symbols, he also asserts that it is not just one faction which stands to benefit from this. “The activism of a politician around festivals will depend on which festivals are celebrated in his constituency,” he says.  “This is not ‘religious’ mobilization per se but a form of identity politics and it is difficult to separate the two. Practitioners of religion are being called upon to act politically. ‘Threat to religious practice’ is a constant refrain.”

Since festivals are an indispensable component of social and religious identities, they have always been prone to politicizing. “It would be disingenuous to claim that all criticisms of religious icons or symbols are purely borne out of identity politics,” according to Douglas Ober, from the Centre for India and South Asia Research of the University of British Columbia. "Just as it would be too broad a judgement to assert that the right-wing response to these criticisms is purely based on identity politics. Public debates and discussions, including those that are acrimonious, are simply part of the historical record in India (as elsewhere in the globe). This does not mean that all ritual or “religion” is inherently toxic, but these trends can be traced up through the present day and isn’t simply a product of modern discourses and new political cultures."

Ober further believes most would agree that society is currently witnessing a resurgence of populism and associated identity politics (on steroids) where communication technologies are accelerating processes of ‘othering’.

“Social media has in some ways democratized the expression of beliefs and values but the ways in which it is structured and operated means that it also fostered more singular and hegemonic views," he adds. "It is also re-asserting forms of affinity bias, the idea that we feel safer with those who are like us. We see this in the way that some individuals proclaim that only Hindus can trust Hindus, or Muslims trust Muslims, etc. And social media has also accelerated [that]. ”

The potent mix of traditionalism and consumption

With festival celebrations becoming increasingly tied to consumption and the majoritarian inclination to stick to traditions, nuanced discussions on the norms of celebrations have become trickier.

Citing the example of an ad that was released by Tanishq before Diwali and which the company withdrew after social media backlash, Srinivas says that Diwali, like other festivities, is being increasingly tied to consumption.

“The Tanishq ad promoting a cracker-free Diwali asked us not to burst crackers but buy gold,” he says. “How does swapping consumption of gold and firecrackers benefit the environment? What choice is there as far as going green is concerned? It is setting up a false opposition.”

Faiz Ullah, an assistant professor at the School of Media and Cultural Studies at the Tata Institute of Social Sciences weighs in. “Festivals have become more about consumption and assertion and these changes are very recent against the larger historical horizon,” Ullah says. “The conduct of the mainstream media has also become a matter of concern where in spite of supposed professional editorial checks, we are seeing more and more polarizing and hateful content. [It’s] very difficult to have such a conversation in a heightened polarized environment.”