How the Hegelian Dialectic Became a Far-Right Conspiracy Theory

Legend has it that when the philosopher Georg Wilhelm Friedrich Hegel was nearing his final moments in November of 1831, he purportedly uttered the following words: “Only one man ever understood me, and even he didn’t understand me.” This assessment, like many of those offered by the notoriously obtuse and complicated German philosopher, can be applied today. In 2021, Hegel’s vast body of work remains mostly inaccessible to non-specialists.

It isn’t entirely Hegel’s fault that his ideas are not widely understood; though it doesn’t help that German Idealism, the philosophical movement to which he belonged, used highly obtuse language that’s even more difficult to understand in translation. Hegel has been subject to countless smears and distortions since his death. Influential fellow 19th-century philosophers Arthur Schopenhauer and Friedrich Wilhelm Joseph Schelling disparaged Hegel and, some say, grossly misrepresented his philosophy. Over 100 years later, Karl Popper wrote in The Open Society and its Enemies that Hegel was a proto-fascist apologist for the totalitarian Prussian state. Bertrand Russell remarked in The History of Western Philosophy that Hegel illustrated “an important truth, namely, that the worse your logic, the more interesting the consequences.”

From dogmatic arch-rationalist to bloodthirsty warmonger, the charges against Hegel are diverse and far-reaching, much to the frustration of contemporary Hegel scholars, who have long sought to dispel some of the myths associated with their field of study.

But on paranoid subreddits and in dark corners of Twitter, Hegel is being discussed in an entirely different way; one even stranger than billionaire weirdo Elon Musk’s contention that Hegel was the inspiration behind the video game Fallout: New Vegas.

Internet conspiracy theorists have interpreted Hegel’s philosophy as an instrument of social control used by a shadowy cabal bent on implementing a New World Order.

The theory goes like so: dark forces contrive a crisis, which causes outrage or instills fear in the public. Afterward, a solution to restore public order is proposed. New laws and policies that are enacted, however, covertly serve the purpose that the dark forces wanted all along: the enslavement of humanity. This is a form of mass mind control that shepherds an oblivious public towards tyranny and oppression: the Hegelian dialectic.

Dialectics are perhaps the most misinterpreted aspect of Hegel’s thinking. An extremely popular – though overly simplistic – reading states that Hegel’s dialectic is a way of understanding the world through an abstraction: the triad of thesis, antithesis, synthesis. Something happens (a thesis), which provokes a response (an antithesis); both ideas are then melded together (a synthesis).

Conspiracy theorist David Icke uses a variation of this formula, which he calls "problem, reaction, solution." According to Icke, the owners of global financial institutions – overwhelmingly Jewish, naturally, as is the case in most "theories" of this nature – have been responsible for most of the major crises of the past century, using a Hegel-style strategy to control the world. 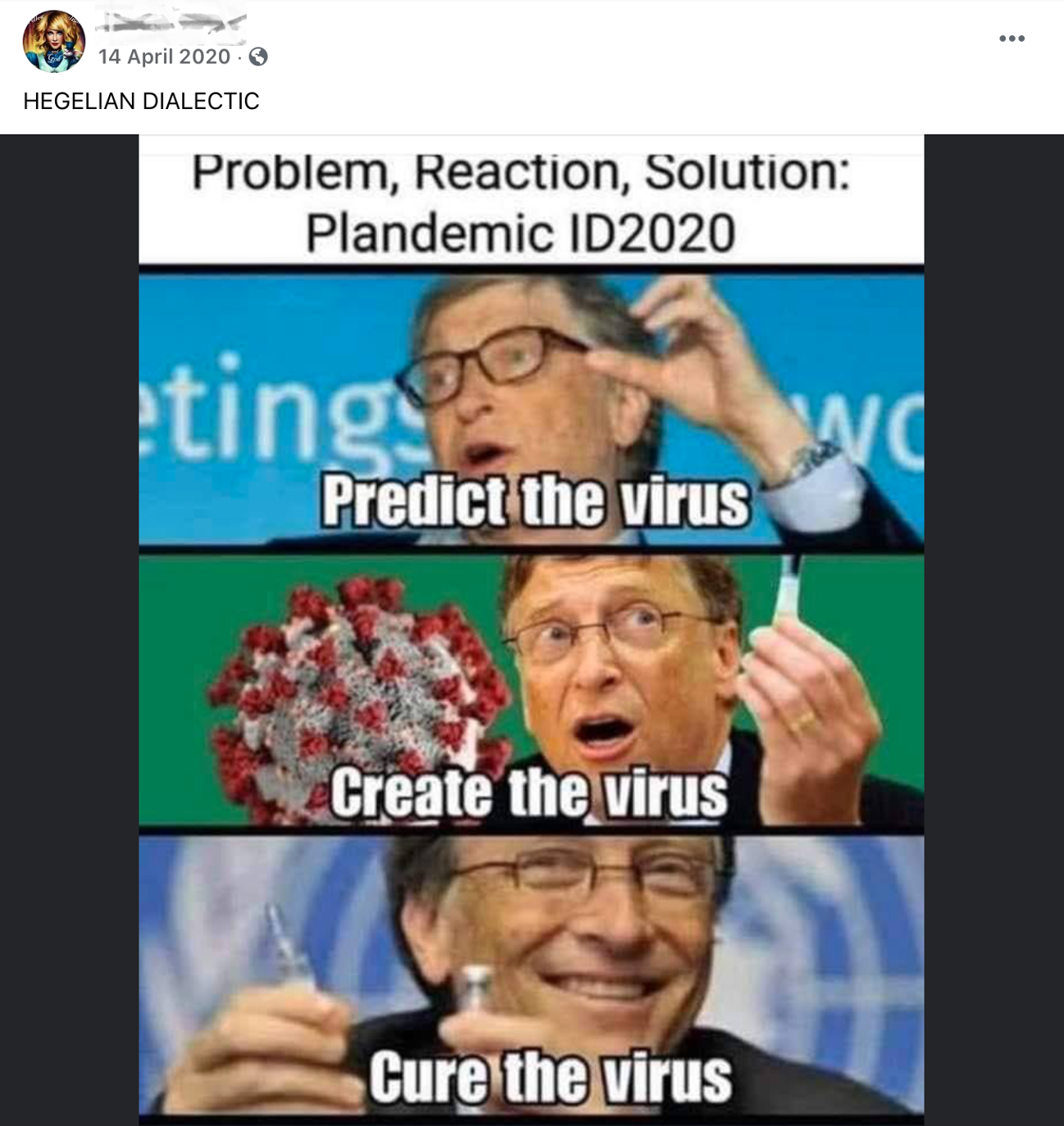 A meme misuses the Hegelian dialectic to blame the COVID pandemic on Bill Gates. Image: Facebook. Pixels: user's own.

Identifying the origin of this peculiar interpretation of Hegel is difficult, though explanations of “the Hegelian dialectic” were appearing in Infowars broadcasts around a decade ago. “The global banking cartel has used one tried and tested method to create wars, rob us of our currency, and eat away at our substance: this process of control over the masses is called The Hegelian Dialectic,” warns a voice in one ominous report. Op-eds breaking down problem, reaction, solution were published on the site. Hegel has also reached so-called the world of "neomasculinity." Roosh V wrote a 2015 screed warning his readers about ‘the Hegelian dialectic."

Perhaps we shouldn’t be that surprised at any of this. The misinterpretation of philosophical, theoretical, and literary terms is not confined to internet misogynists or people who think that the U.S. government is putting chemicals in drinking water to turn frogs gay. Ideas that enter popular culture are often bastardized, washing up in newspaper columns and on Twitter, sapped of all meaning. "Gaslighting," a name for a form of abuse in which a person makes someone else question their sanity, can now be applied to an entire country. "Orwellian" is when climate change deniers are excluded from debating global warming. Kamala Harris, who laughed about jailing the parents of truant children, has become an "intersectional feminist."

Maybe it’s even simpler than that: some ideas are just compelling enough for us to want to try them out as we attempt to interpret the world. Some of us will always turn to things like Nostradamus, the Mayan calendar, or "the Hegelian dialectic," in search of answers to existential questions: it's appealing to believe that our lives have been prophesied – and therefore given meaning – by ancient wisdom. And there’s an element of truth to what some conspiracy theorists think. We are at the mercy of extremely powerful forces we don’t fully understand. But there is no secret society of shapeshifting reptile fascists responsible for the chaos and suffering around the world — just the cold, indifferent machinery of capital.

So, once and for all, what is a Hegelian dialectic? Is it possible to find out?

“Hegel has quite a specific conception of dialectic,” explains Stephen Houlgate, Professor of Philosophy at the University of Warwick, and author of numerous books on Hegel, including the upcoming Hegel on Being.

According to Houlgate, Hegel’s dialectic is the process in which a thing that is one-sided or abstract turns into its own opposite. “It’s a dynamic idea; it violates the law of non-contradiction [two contradictory propositions cannot be true at the same time], which is why several analytic philosophers can’t get their mind around it – my view is if ever you hear someone on the radio or anywhere else say 'there is a dialectic between A and B,' you know they don’t know what they’re talking about; or at least they’re not talking Hegel,” he says.

In The Philosophy of History Hegel analyses how various societies have housed different conceptions of human freedom over time. In Philosophy of Right Hegel looks at certain forms of rights and social structures. In The Phenomenology of Spirit Hegel traces the development of human consciousness throughout history as it takes on various shapes. He applies his dialectical approach throughout each.

The Phenomenology includes the famous master-slave dialectic. Hegel points out that while the master is in a position of dominance, his freedom is dependent on the subservience of another. The freedom and independence of the master ultimately prove to be a kind of dependence, precisely because of the very way in which the master is independent. Simply put: you can’t dominate someone unless there’s someone to be dominated. The master’s independence and dominance become a kind of dependence once he realizes this.

Marx’s critique of capitalism is greatly influenced by Hegel. For Marx, capitalism is a form of free society when compared to feudalism; the capitalist and the worker come to an arrangement whereby one employs the other. But a contradiction emerges. The worker becomes alienated from the products of their own labor, while the capitalist keeps all the profit. What was initially a form of freedom turns into a form of oppression. Marxists argue that the contradictions of capitalism will ultimately lead to revolution, producing a new social, political, and economic order.

For Hegel, the phenomenon of things becoming their own opposite permeates the world. It even finds its way into popular sayings, like pride comes before a fall; someone is in a great position but then suddenly finds themselves in a terrible one. We see it in Greek tragedy, too: Antigone champions family over the state, and Creon champions the state over family. Their extreme positions lead to conflict, and then inevitably to (an already fated) catastrophe.

“Both have a good position to defend, the family or the state,” says Houlgate. “But they go wrong and violate one another’s rights. And they do violence to themselves. They promote the right thing, but in such a one-sided way that it ends up turning into the wrong.”

Thinking in a Hegelian manner can help us better understand the existence of the kind of angry, bewildered people who buy into conspiracy theories. In his analysis of civil society, Hegel takes interest in the “rabble” mentality (an unfortunate term); the resentment people feel when they’ve been deprived of their rights. He also notes how societies that are geared towards maximizing wealth leave masses of people impoverished and alienated.

“If you listen to some of the Trump supporters... they articulated a sense of being left behind. No one cares about us. That strikes me as being a kind of alienation,” says Houlgate. “If you build into this a sense of resentment and unfulfilled entitlement – would that explain why people lose trust in standard news outlets and things? I don’t know… but I think Hegel might ask us to think about the self-contradictory elements in the society we’ve produced.”

We can ask dialectical questions. Why has civil society, whose purpose is to secure the welfare and rights of its participants, produced subjects who feel so abandoned? How has the internet, which offers the full breadth and scope of human knowledge at our fingertips, resulted in such ignorance? When did Hegel, a philosopher who historicized humanity’s understanding of the character of freedom, become the purveyor of a theory that posits mankind is doomed to enslavement?

If we’re lucky we might produce a synthesis and a greater understanding of how the world both does and doesn’t work.

Paulie Doyle is a writer based in Dublin.

A meme on Irish twitter has offered users a glimpse of a possible future in which a key fixture of Dublin’s public transport system, the Luas, is free.

The Depp-Heard Trial Is a Vector for Misogynistic Misinformation

Johnny Depp and Amber Heard's libel trial has elicited an unprecedented online response. In the space of a few weeks, we have seen countless memes mocking Heard's testimony of domestic abuse, trending hashtags and terms such as...