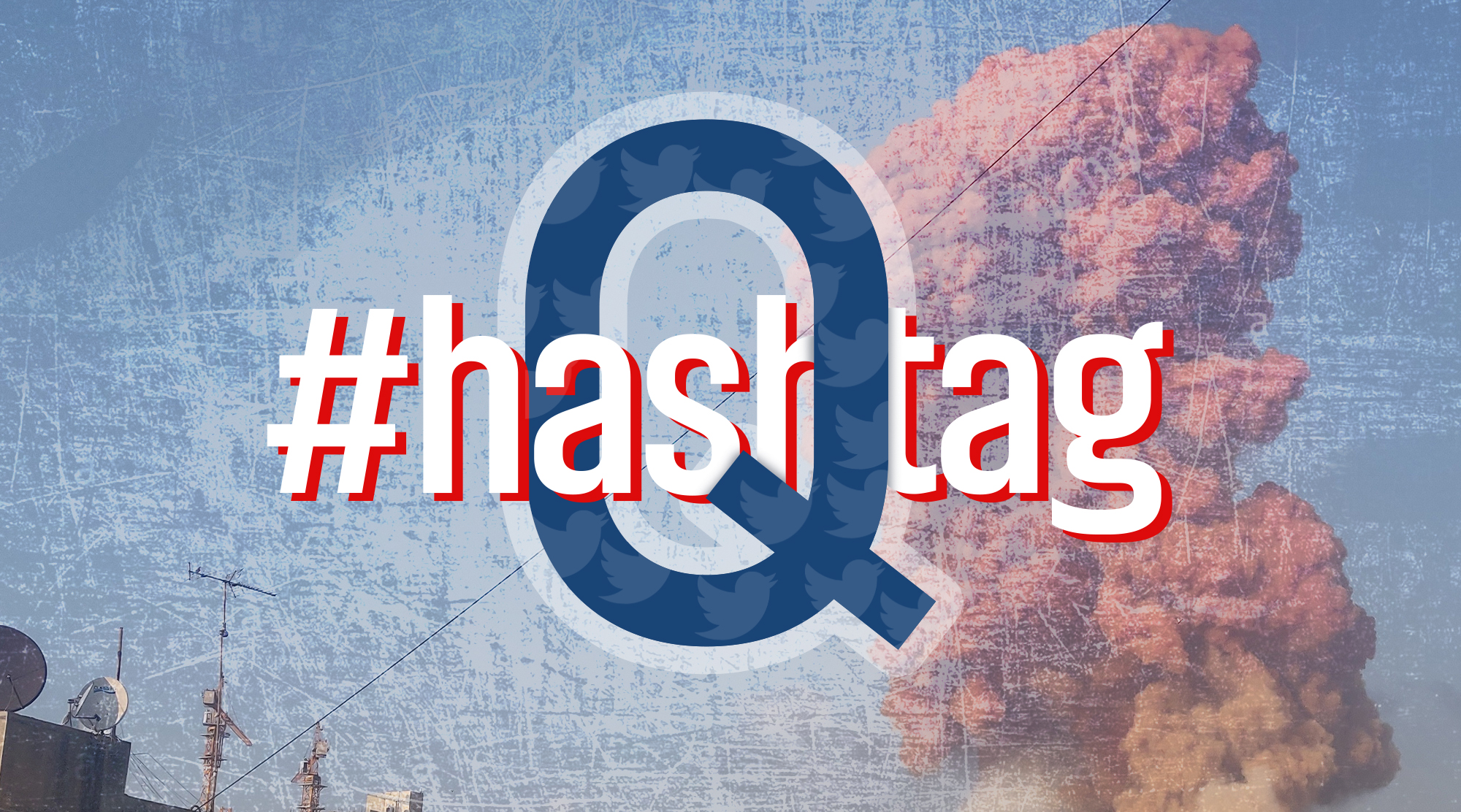 Last week, a shocking explosion at the port of Beirut that left over 130 dead and thousands more injured and displaced immediately gripped the world. Videos of the blast’s shockwave circulated quickly on social media, with the visible pressure wave and massive destruction leading  to early speculation about tactical nuclear weapons being used. Though this has been widely and rapidly debunked, the story has, inevitably, been caught up in the wake of 2020’s post-Covid conspiracy boom.

We have previously reported on how sprawling conspiracy struggles to find a unified consensus on unexpected world-news events and how it also works to control the discourse around adjacent conspiracies until they become part of the QAnon ‘narrative’. It is no surprise that soon after news of the disaster had hit the Internet, Twitter users braced themselves for the ensuing flood of QAnon speculation.

While the theories are absolutely present and accounted for – anti-Semitic speculation that the blast was designed to blow up a bank (wrongly) assumed to be owned by the Rothschilds, a test for secret military weapons and aircraft, Trump blowing up a port used for child trafficking, and much more – the initial QAnon community reaction to the disaster was not easily trackable through hashtags. As can be seen in the examples of QAnon tweets in Claire Goforth’s DailyDot article, the usual Q accounts have been submitting their expert analysis stripped of the usual shotgun blast of #QAnon, #QArmy, and #wwg1wga. However, if you follow the right accounts, the theories are right there for all to see (if you have a Tweetdeck set up to monitor QAnon, for instance).

QAnon accounts dropping hashtags on tweets has been an ongoing development during events over the past few months. Here at Logically, we first noticed the practice when QAnon followers started trying to siphon off the political energy of younger netizens discovering Pizzagate and spreading disinformation about the Wayfair conspiracy. Here, Q-associated accounts were dropping partisan signifiers and pro-Trump hashtags – and in some cases, QAnon hashtags altogether – to steer the reinvigorated Pizzagate conversation towards the less clearly partisan aspects of the QAnon conspiracy. This control of the narrative can also be seen in the recent Wayfair conspiracy, which was started by a Reddit user who did not endorse QAnon. However, within a matter of days, the sprawling conspiracy commanded the conversation.

The “de-Trumping” of QAnon also happened around the Black Lives Matter protests, similarly targeting younger users who are politically charged, but not necessarily focussed in their efforts. This approach appeared to overlap with their activity around Pizzagate, working as a way to “redpill” online users who were not fully committed to the BLM movement or were having doubts about its effectiveness. This culminated in the proliferation of anti-Semitic theories being attached to Black Lives Matter and specifically the accusation that they were funded by George Soros to “bring about the new world order.”

QAnon’s command of the fringe and alternative online conversation around current events, especially on Twitter, led to the ban of over 7,000 accounts in late July. This then leads us back to the tragic events of last Tuesday and the QAnon conversation around it.

While earlier hashtag-drops and de-trump efforts by the Twitter QAnon community were in order to encroach upon adjacent movements that are similarly sceptical to authority but not necessarily politically sympathetic to QAnon’s allegiances, the lack of hashtags around the Beirut explosion illustrate that the community has taken this approach as a way to dodge Twitter bans.

If one were to take a hashtag Twitter pull in the 12 hours following the explosion, the largest and most connected node is #prayforlebanon. This show of solidarity in the fractured and bewildering year that is 2020 is a reassuring sight, especially when one would expect to come across a sea of #QArmy related tags offering their take on the events. In fact, on the day, the earliest tweets containing “QAnon” and “Beirut” or “Lebanon” were from users readying themselves for theories or surprised at the lack of loud voices from the conspiracy group. 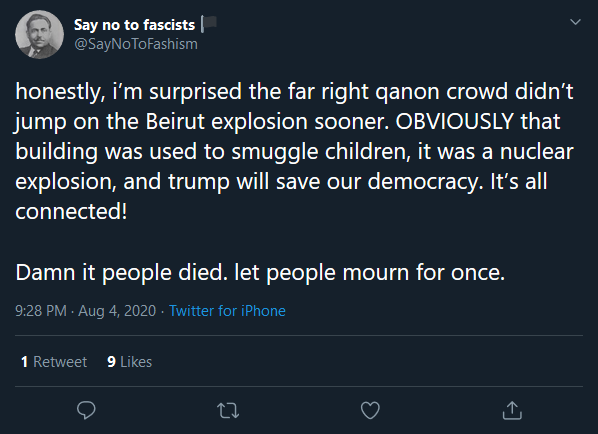 However, while hashtags and search terms were once the main organizing principle behind Twitter communities, QAnon has now taken a leaf out of the Zoomer online playbook; dropping these terms that could flag their behaviour and instead ensuring that users are following the right people. Messages by influential QAnon accounts were still broadcast on Twitter immediately after the explosion, and still had significant reach, but were stripped of QAnon signifiers (except for the name of one account). 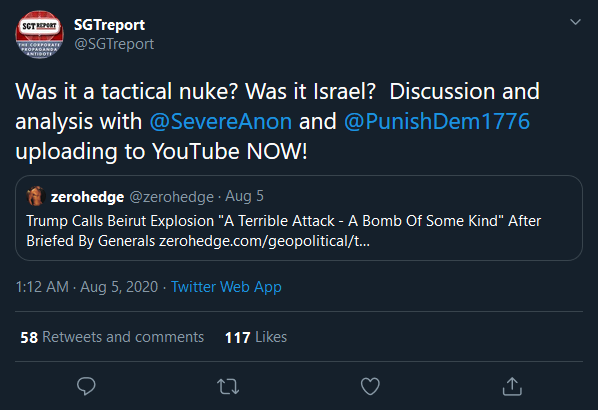 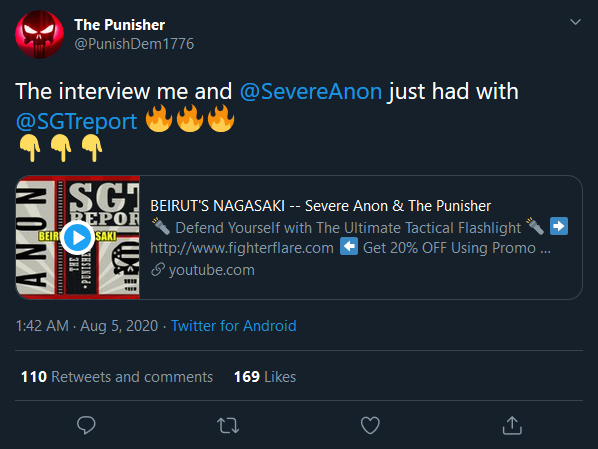 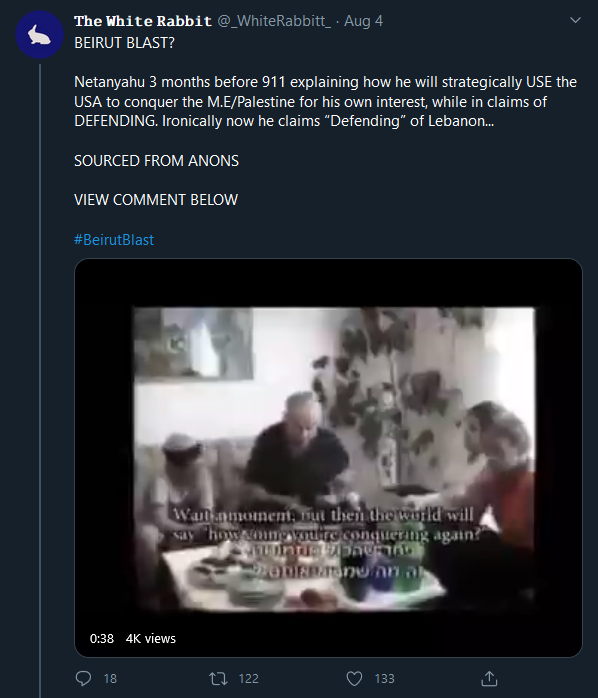 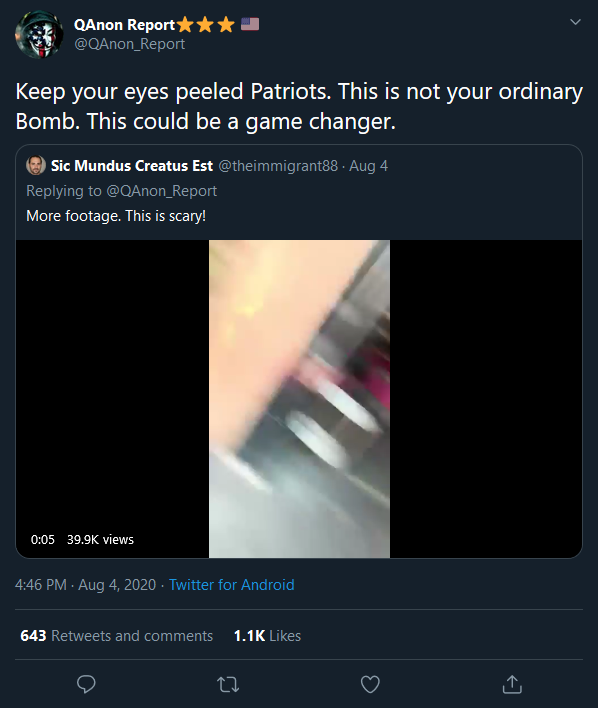 Despite QAnon still thriving on Twitter, not all in the community are thrilled by the move to drop hashtags. Todd Burgun, for instance, calls upon his followers to continue using #QAnon in order to reclaim the conversation around the hashtag. 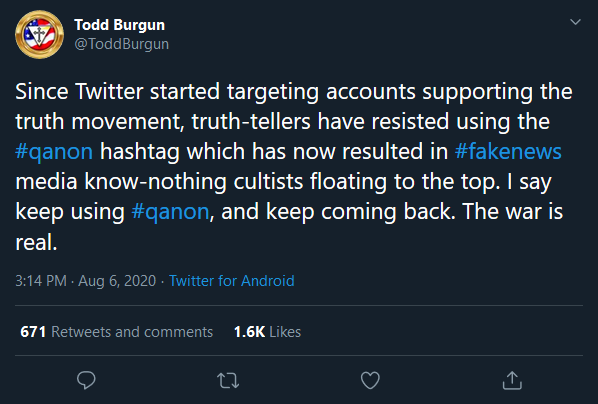 Other developments in by the community to spread the word of Q include using images of text in order to dodge filters. A reply to Todd’s tweet above was this image intended to “redpill” the curious into diving further into Q’s convoluted narrative. 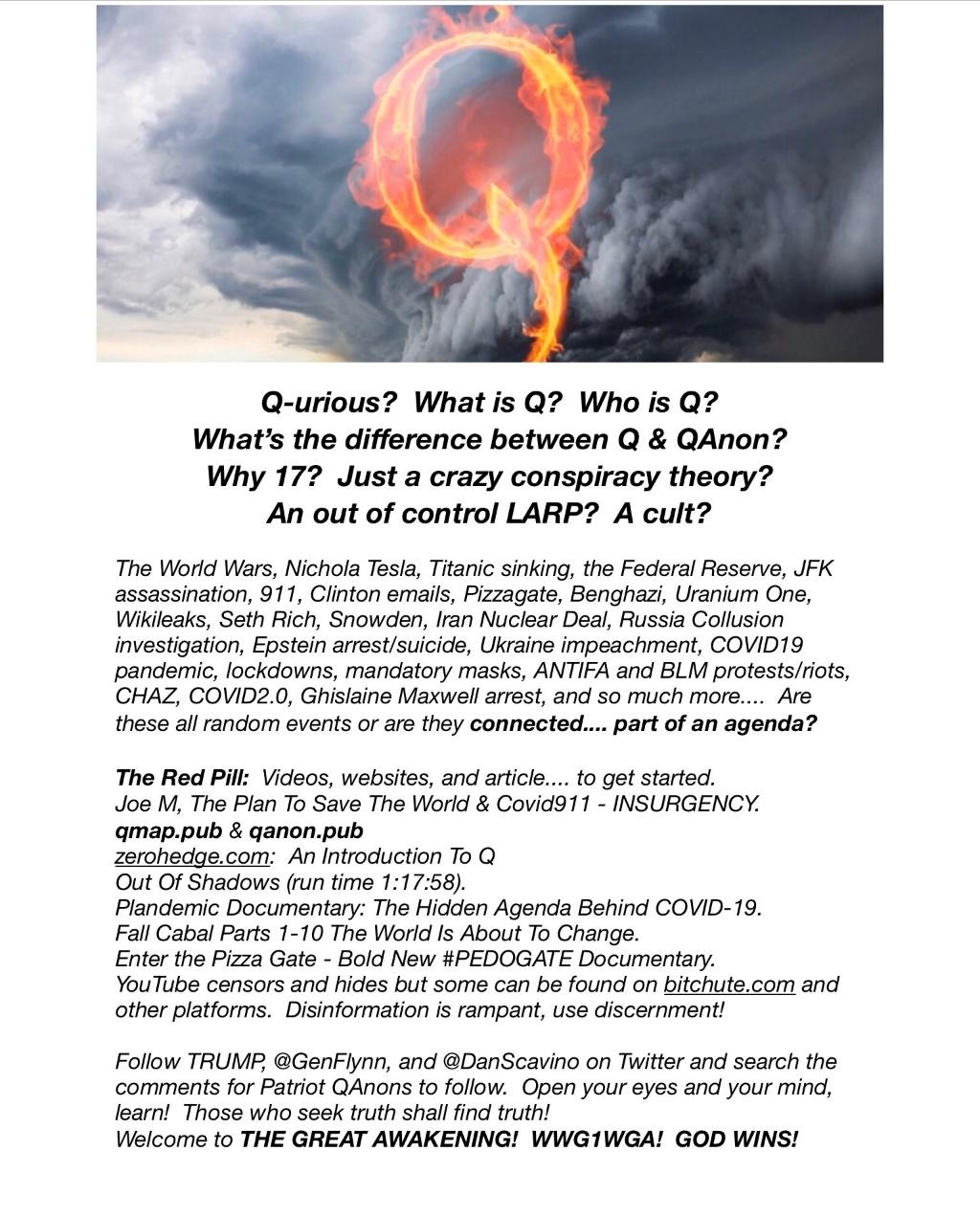 In addition, in order to ensure that the community stays closely knit and everyone is following the right people, the QAnon community has adopted the strategy of “Trump Trains.” This method of boosting follower numbers and galvanizing a Twitter community has been around for a while, and there is no doubt overlap between a Trump Train and a Q-Train. The revival of this practice may, in part, be due to November’s election. However, if the train is now painted in QAnon colours and serves to solidify an increasingly influential and sprawling disinformation conspiracy, it is certainly a practice to watch closely in the coming months.

With the leaked draft of the Supreme Court decision to overturn Roe v Wade, campaigns to make abortion legal or illegal will ramp up across the U.S. This means that Americans are going to encounter lots and lots of pictures of fetal remains.