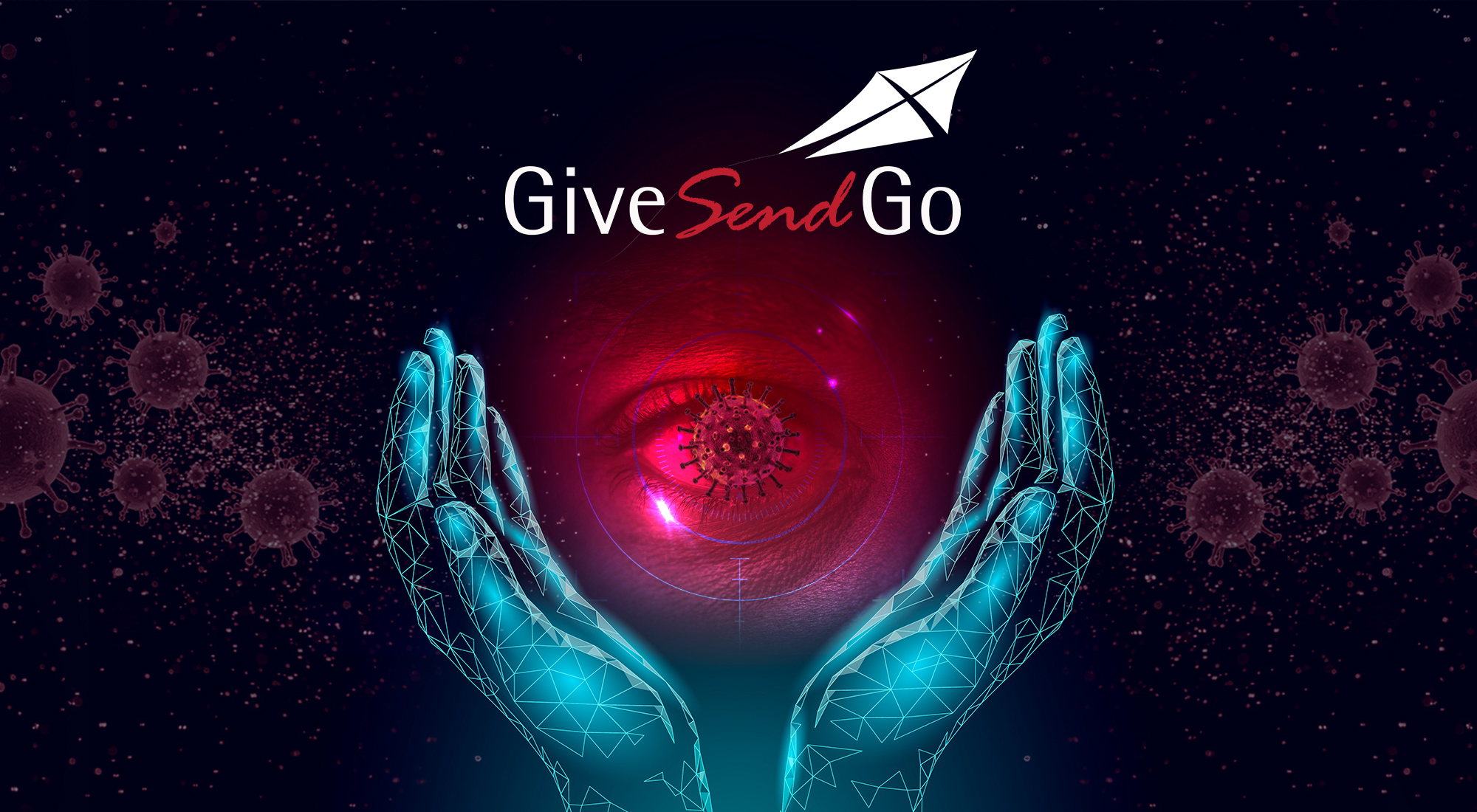 In April 2021, Christian crowdfunding site GiveSendGo was taken to task by a number of mainstream news outlets over its decision to permit Capitol insurrectionists, the Proud Boys, and Kyle Rittenhouse to raise funds for their respective legal defenses. Attempting to set the record straight, the site’s owners, Heather and Jacob Wells, posted a blog entry explaining their decision. Referring specifically to the Capitol insurrection, they insisted that “GiveSendGo is not a political pawn," and emphasized they “do not condone the use of violence for political gain, and unequivocally condemn those who threatened the lives of our elected leaders...”

While this was enough to satisfy the thousands of donors who frequent the platform, an investigation by Logically has revealed GiveSendGo to be the hub for a multi-million dollar far-right funding network, comprising well-known QAnon supporters, anti-vaccine activists, and the far-right media outlet Project Veritas.

Touted as the “#1 Christian Crowdfunding Site” and “a place to work together with the body of Christ,” GiveSendGo hosts a number of legitimate campaigns for teenagers funding missionary work abroad and families supporting seriously ill relatives. A search for these campaigns shows fewer than half have met their targets and, of those who have, few raised more than a couple of thousand dollars. In stark contrast, the Rittenhouse legal defense raised upwards of $600k and an ongoing InfoWars legal funds campaign is at $345k and climbing.

GiveSendGo’s justification for this anonymity is a fear of “cancel culture.” As Twitter and other platforms have begun to crack down on disinformation, including some far-right political narratives, a number of high-profile spreaders have been suspended. the subsequent exodus to platforms like Gab has fueled a sense among those deplatformed by Twitter that they belong to a community of political underdogs, vilified for what they feel are reasonable beliefs.

The original Rittenhouse fundraiser was removed by GoFundMe, because as the crowdfunding company explained, its terms of service “prohibit raising money for the legal defense of an alleged violent crime.” Unlike on Twitter and GoFundMe, GiveSendGo’s story, that Kyle “defended himself from a brutal attack by multiple members of the far-leftist group ANTIFA – [where] he was forced to take two lives to defend his own” resonated with GiveSendGo donors.

Trying to identify the donors of all this money is more complicated. The top ten donors to the Rittenhouse fund, who have given $19,000 between them, are anonymous.

Unsurprisingly, Trump-related campaigns appear all over GiveSendGo, and it has become a financial hub for Stop The Steal. The largest of these campaigns is run by former Trump staffer Matt Braynard, who intends to use the $600k raised to “acquire voter data” and “deploy a call center to track down people…and ask whether or not they actually cast a ballot.”

While keen to state that “Matt Braynard will personally receive $0” from donations, it does not mention that his company, External Affairs Inc, specializes in providing voter data to politicians. Something which is apparently of no concern to his five top donors, who collectively and anonymously gave $55k.

Not all donors are so privacy-conscious, and a number of Republican candidates are either running or donating to similar campaigns that undermine trust in elections. Adam De Angeli, campaign manager for former Republican candidate Ron Paul, is one of them. He is not the first associate of Paul’s to involve themselves with the Stop the Steal movement. Another ex-staffer, Stewart Rhodes, was recently arrested for his involvement with the anti-government militia, the Oath Keepers.

Despite the Wellses’ claim that GiveSendGo’s purpose is “greater than any short-term political agenda the Left or the Right wants to throw on us," its Gab account follows numerous Stop the Steal accounts. Jacob Wells’ personal Facebook indicates his support for anti-lockdown rhetoric via the Great Barrington Declaration, a laissez-faire manifesto towards pandemic response that numerous scientists and public health bodies called “dangerous.” Wells was, for a long time, the sole donor to a funding campaign run by We The People Radio, a QAnon-promoting podcast.

There were numerous examples of QAnon fundraising. The QAnon-promoting, self-styled faith healer David Hayes (aka the Praying Medic) – who has been banned from every mainstream platform and payment service – has found a lucrative home on GiveSendGo. In the last few months, he has raised over $64,000. Hayes, who is currently telling his 40k Telegram followers that sticking pennies to the wall will help them “start a conversation with God," is quick to inform donors that he is collecting their contact information for purposes of maintaining his registration as a non-profit organization.

Banned from YouTube, We The People Radio exists solely as a podcast, but its Instagram posts are awash with COVID-19 disinformation and screenshots of Q-drops, and its website currently sells T-shirts featuring pictures of Rittenhouse holding a gun and the words “white boy summer.” It also displays undisguised admiration for Mike Lindell and shared a photograph taken at the “Patriot DoubleDown” event in Las Vegas, showing We The People Radio founder James Currey alongside both Lindell and Jacob Wells.

In an interview with the show, given at the “Reawaken America” conference run by Clay Clark, Wells advised the host that “[the left-wing government] are creating weak, soft people” and that GiveSendGo provided an opportunity to challenge this. Demonstrating his commitment to God over politics, Wells spoke about the profound effect of meeting evangelical preacher Billy Graham as a child. In similarly reverent tones, he also discussed a recent encounter with Infowars founder and conspiracy promoter Alex Jones, who “recognized” him and asked him to be on the show.

The role of the QAnon conspiracy in Republican politics is no secret. Conferences such as Reawaken America and Patriot Double Down provide a platform for those whose popularity relies upon their professed support for unfounded conspiracy theories.

The controversial non-profit media outlet, Project Veritas, also uses GiveSendGo. Most recently, Veritas fielded a number of speakers at the same Q conferences as Wells and We The People Radio. Known for its selectively edited “exposés” of companies such as Planned Parenthood, Veritas has also created a series of programs interviewing supposed whistleblowers at high-profile, politically relevant companies ranging from Facebook to Pfizer.

Its format is simple. A “whistleblower” appears on Veritas’ YouTube show and reveals an email chain, documents, or gives an interview that demonstrates supposed wrongdoing by their employers. Within days of the initial interview, the whistleblower is fired by their organization. Veritas then claims the firing was due to their beliefs, whether about COVID-19 or abortion or voting, and uses GiveSendGo to establish a crowdfunder to cover the wages of its now unemployed subject.

The campaigns, which can raise hundreds of thousands of dollars, serve a dual purpose – vilifying the target company and allowing the non-profit NGO Veritas to claim that they do not pay its whistleblowers. Reliant entirely on donations, Veritas’ tax returns from 2019–2020 show that it received $12 million in Contributions and Grants, and that its founder, James O’Keefe, received a wage of $396,000. While a complete list of donors does not appear to exist, it is known that previous benefactors include the Donald Trump Foundation and the conservative dark money fund the Donors Trust.

One of its most recent whistleblowers was Melissa McAtee, an administrator who spoke out about supposed irregularities in the vaccine program at Pfizer. McAtee’s crowdfunder raised over $200k before GiveSendGo made the total private, and she later appeared as a keynote speaker at the DoubleDown Vegas conference alongside Dr. Stella Immanuel, a doctor who promoted numerous quack cures for COVID-19 and famously argued that demons cause sexual illnesses, and Ron Watkins, the founder of far-right troll site 8kun that hosted QAnon.

In the course of this investigation, we attempted to find left-wing causes on GiveSendGo. A search for the term “LGBT” brought up three campaigns, all organized by the conversion-therapy-promoting “Freedom March” group. Further digging revealed that Heather Wells-Wilson has worked closely with Janet Folger-Porter. An anti-abortion rights activist who has previously stated that gay marriage caused Noah’s floods, Porter also pioneered a conversion therapy campaign and authored the controversial “Texas Heartbeat Bill.”

While the Wellses do not take a fee for campaigns that use the site, they do subtract a three percent processing fee on behalf of their payment platform. Recently dropped by PayPal, they now use an undisclosed third party. In 2016, despite having no obvious income stream, the site acquired fellow faith-based fundraiser FaithLauncher and its customer base along with it.

Jacob Wells did not respond to a request for comment about the conspiracy causes his website funds, or the fee that he and his wife receive.

Katherine Denkinson is a freelance investigative journalist with bylines in The Times and The Independent.