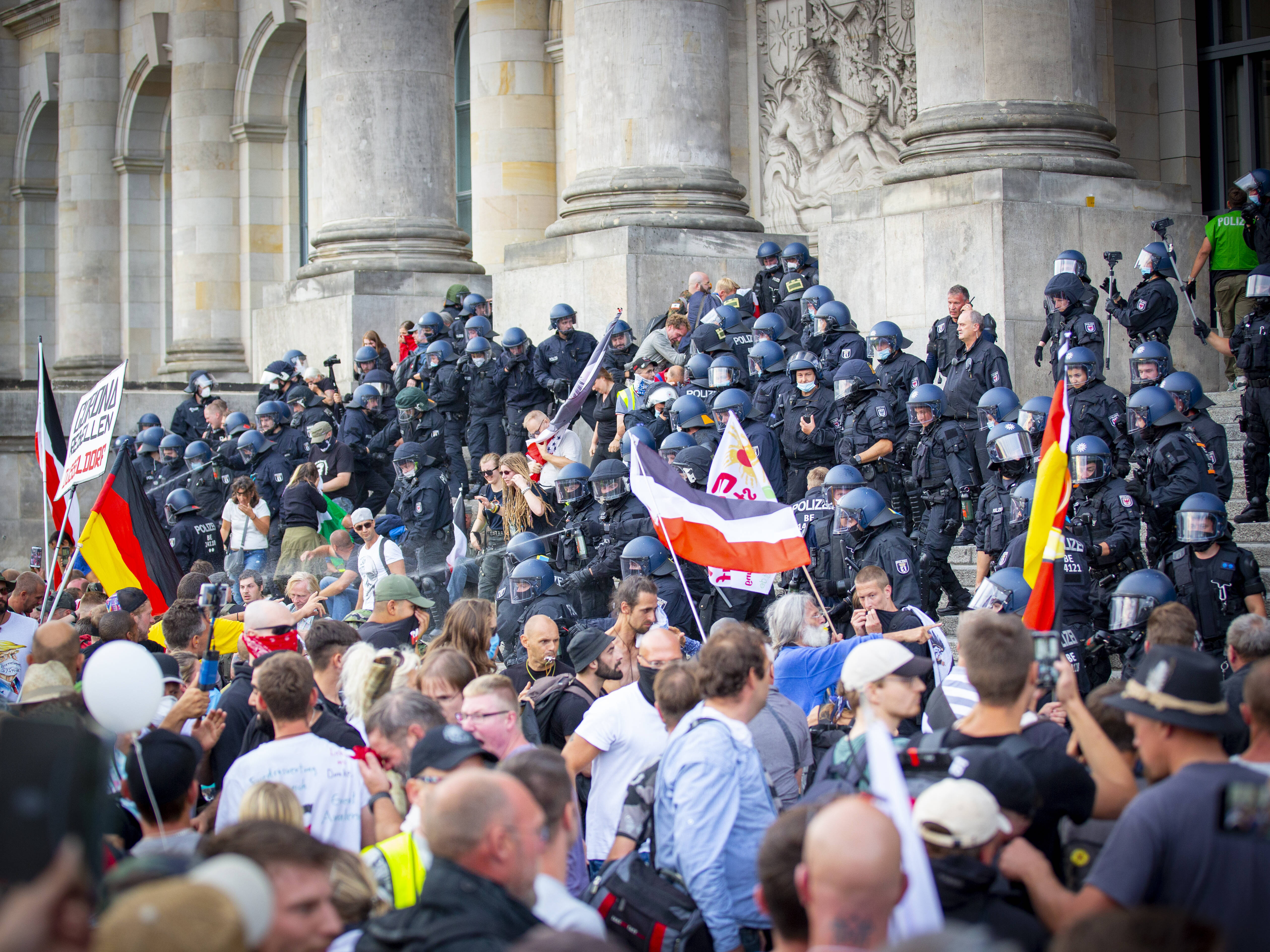 New research from Logically shows that German-language conspiracy groups on Telegram in the DACH region (Germany, Austria, and Switzerland) have raised at least €284,678 ($337,660) for conspiracy and far-right causes across 214 crowdfunding campaigns. At least thirteen of these campaigns consistently raised a minimum of €4,627 ($5,489) per month.
The research sampled 1,200 Telegram groups and channels connected to far-right and conspiracy groups and channels, counting the number of links to crowdfunding websites. A further 45 groups and channels on Telegram with clear QAnon messaging were assessed, establishing a total of 1,585,965 aggregate members. Of this, 148,385 accounts were members of 17 key groups and 1,437,580 accounts had subscribed to 28 key channels.

To account for how many members are part of multiple groups, we used a random sample of ten of these groups to analyze the percentage of accounts that are part of more than one group. This analysis demonstrated that 85 percent of group members were unique accounts. Extrapolating this to all 45 groups and channels surveyed suggests a total unique membership of 1.3 million unique accounts. While adjusting for crossover in channel followership with this method is imperfect, it helps account for the inaccuracies present when measuring total followers with an aggregate number. As the DACH region has a total population of ~100 million, this means at least 1.3 percent of the region’s population is likely present in QAnon-adjacent conspiracy groups on Telegram.

Telegram is an influential hub for organizing real-world protests, demonstrating a significant spillover from QAnon adherents into anti-lockdown and COVID-skeptic movements. At least 4,300 protests have been organized on Telegram within Germany since June 2020, based on data from a Telegram channel dedicated to publicizing protest dates that has gained a large following within the community. The vast majority of the protests listed account for demonstrations against lockdown measures, mask-wearing, and vaccination programs. Protests were most often organized in Berlin, Nuremberg, Stuttgart, Cologne, and Munich.

The largest German-language QAnon channel on Telegram has at least 152,000 subscribers. By comparison, the largest English-language channel has more than 334,000 subscribers. For comparison, the global population of native German speakers is around 130 million, whereas the same figure for native English speakers is 1,348 million, presenting a hypothesis that a significantly greater proportion of German speakers follow conspiracy content on Telegram compared to English speakers.

Breaking down the data

Logically identified 214 crowdfunding campaigns posted across 1,247 Telegram groups or channels between January 2020 and June 2021, which raised a total of at least €284,678 ($337,710). There are three main platforms used for crowdfunding campaigns: Paypal, Patreon, and GoFundMe. The total sum of €284,678 is the lowest verifiable total of donations, as not all PayPal campaigns disclose the donated sum. In addition, some Patreon campaigns don’t disclose total donations, but a monthly figure. The true figure, therefore, is certainly higher.

We identified three main categories for fundraisers: COVID conspiracy activism, QAnon groups, and campaigns that were for a combination of far-right causes. COVID conspiracy activism that raised money for protests against COVID-19 mitigation measures and vaccinations were by far the most popular, even within QAnon groups. In total, 82 campaigns were set up for a variety of COVID-skeptic causes, which raised at least €211,731 ($251,172).

One of the most successful COVID-conspiracy campaigns was organized by Austrian doctor Peer Eifler. Eifler raised at least €43,551 ($51,663) to build a COVID-restriction-free community in Tanzania. He claimed that COVID-19 is a mild form of flu and was accused of issuing a large number of mask exemption certificates. Major QAnon and COVID-skeptic channels and influencers shared the GoFundMe campaign link. Another, set up by Samuel Eckert, a former evangelical preacher who recently gained notoriety for targeting children with anti-COVID-vaccine propaganda, raised over 150,000 Swiss Francs in a campaign which alleged that Christian Drosten, Germany’s leading coronavirus expert, could not isolate SARS-CoV-2, insinuating that it cannot be proven that COVID-19 exists. The campaign said if Drosten “did not deliver” then donations would be refunded. It is not clear whether this actually happened.

The second-largest stream of donations is right-wing activism. There are 57 crowdfunding campaigns with a total donation of €51,313 ($60,870).  For example, €23,278 ($27,613) was raised by the right-wing group Zentrum Automobil, which is linked to Querdenken. The aim of the crowdfunding campaign was to raise money for the treatment of a member of Zentrum Automobil who, according to the campaign description, was attacked by left-wing radicals.

Crowdfunding campaigns that made specific references to QAnon were not very popular, and we did not identify any significant donations. The majority of campaigns used QAnon-adjacent language, i.e. “fighting the pedophiles,” or other loaded conspiracy keywords to dog whistle to QAnon followers.

To measure how discussion in these Telegram groups amounted to real-world activity, we gathered information on protests across Germany from a popular Telegram channel promoting anti-COVID-measures protests. The channel, which posts information based on submissions from within the community, lists times, dates, and locations for protests across Germany. While it is unclear how many of these protests went ahead or how many people turned up, the locations themselves reveal the geographical concentration of the movement. 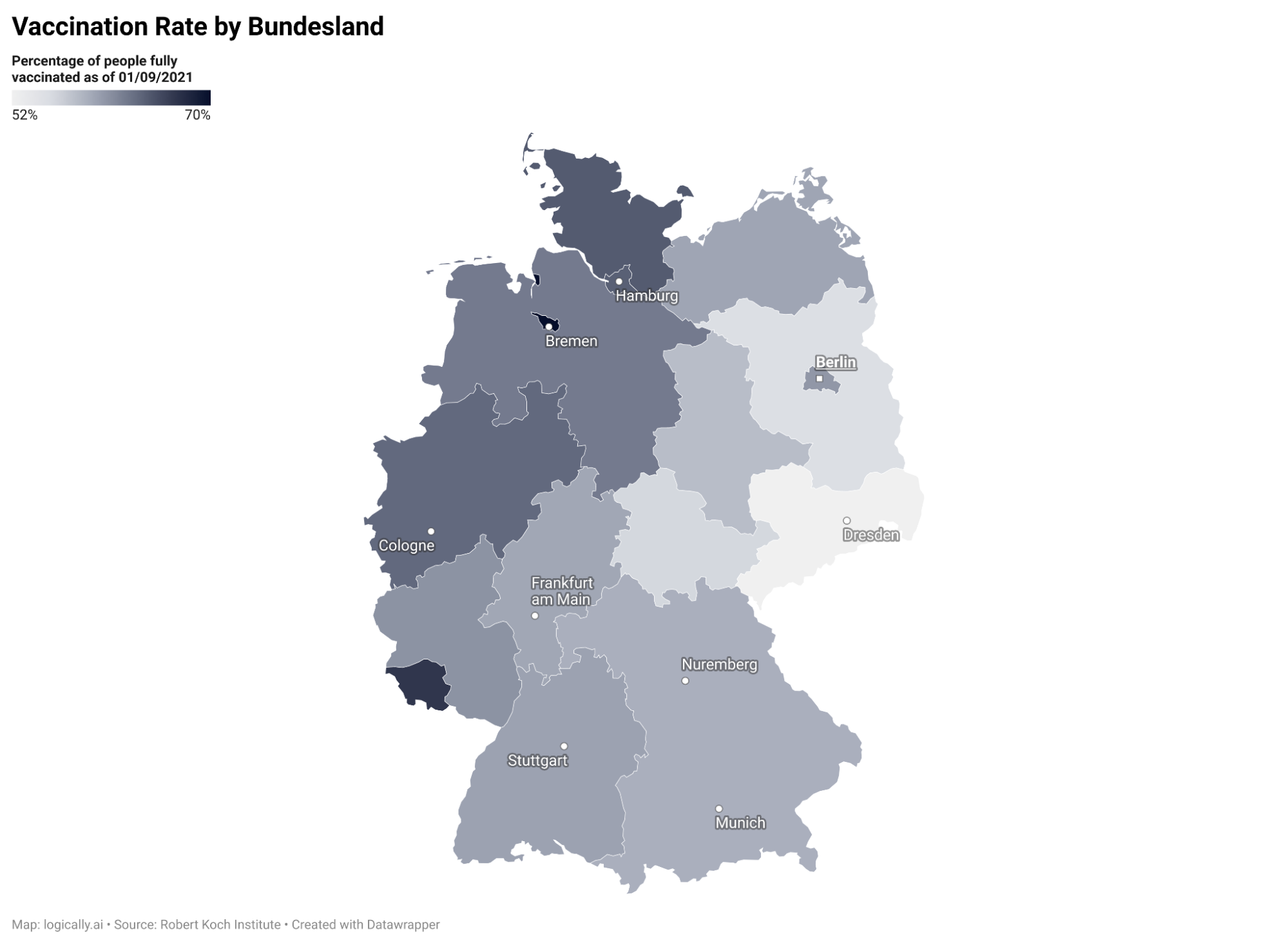 Alongside this, we also measured membership of COVID conspiracy activist and political groups. By measuring total group membership for each localized faction of three groups, it’s possible to establish a general overview of the geographical hotspots for where COVID conspiracy content on Telegram manifests itself in the real world. The figures produced are cumulative membership totals of satellite groups from COVID-skeptic and conspiracy protest groups Querdenken (“Lateral Thinkers”) and Freiheitsboten (“Messengers of Freedom”), and also Die Basis (“The Basic Democratic Party”), a political party formed in the context of demonstrations against COVID-19 protection measures. These groups, which operate both on a local and national level, organize demonstrations, flyering, and other direct action against COVID-19 protection measures. In total, these groups have an aggregate total of 127,463 members, indicating that nearly one out of every 50 people in Germany is part of a COVID-skeptic activist group on Telegram.

The genesis of QAnon in Germany

The first QAnon groups in Germany were created in 2018. The initial content of the groups’ communication was a direct translation from the U.S. QAnon sources and mostly concentrated on U.S. political issues. However, local narratives gradually took shape, and local conspiracy theorists started to promote QAnon ideas.

One of the first German figures observed openly sharing QAnon ideas in Germany was Oliver Janich. Janich is a German far-right conspiracy theorist known for his anti-migrant and antisemitic positions. In November 2018, he promoted qmap.pub as a source for Q Drops that could be translated into German.

German-language QAnon Telegram channels grew rapidly starting in April 2020, and the first anti-COVID measures demonstrations were organized, with the support of these channels, shortly after. On August 1, 2020, one of the first mass demonstrations was organized by the Querdenken movement.

The second large-scale demonstration, on August 29, had been promoted by two major QAnon Telegram influencers, Xavier Naidoo and Attila Hildmann. QAnon conspiracy theorists openly participated in the rally. During the rally, participants tried to storm the Reichstag building — the seat of Germany’s government.

Following the August demonstrations, the number of supporters continued to grow, peaking in January. The rise in subscribers could be attributed to the storming of the U.S. Capitol Building on January 6, when Telegram was flooded with news of what was happening in Washington DC. By February, despite subscribers to channels remaining high, daily post views of German QAnon content took a nosedive, marking a noticeable drop in interest. 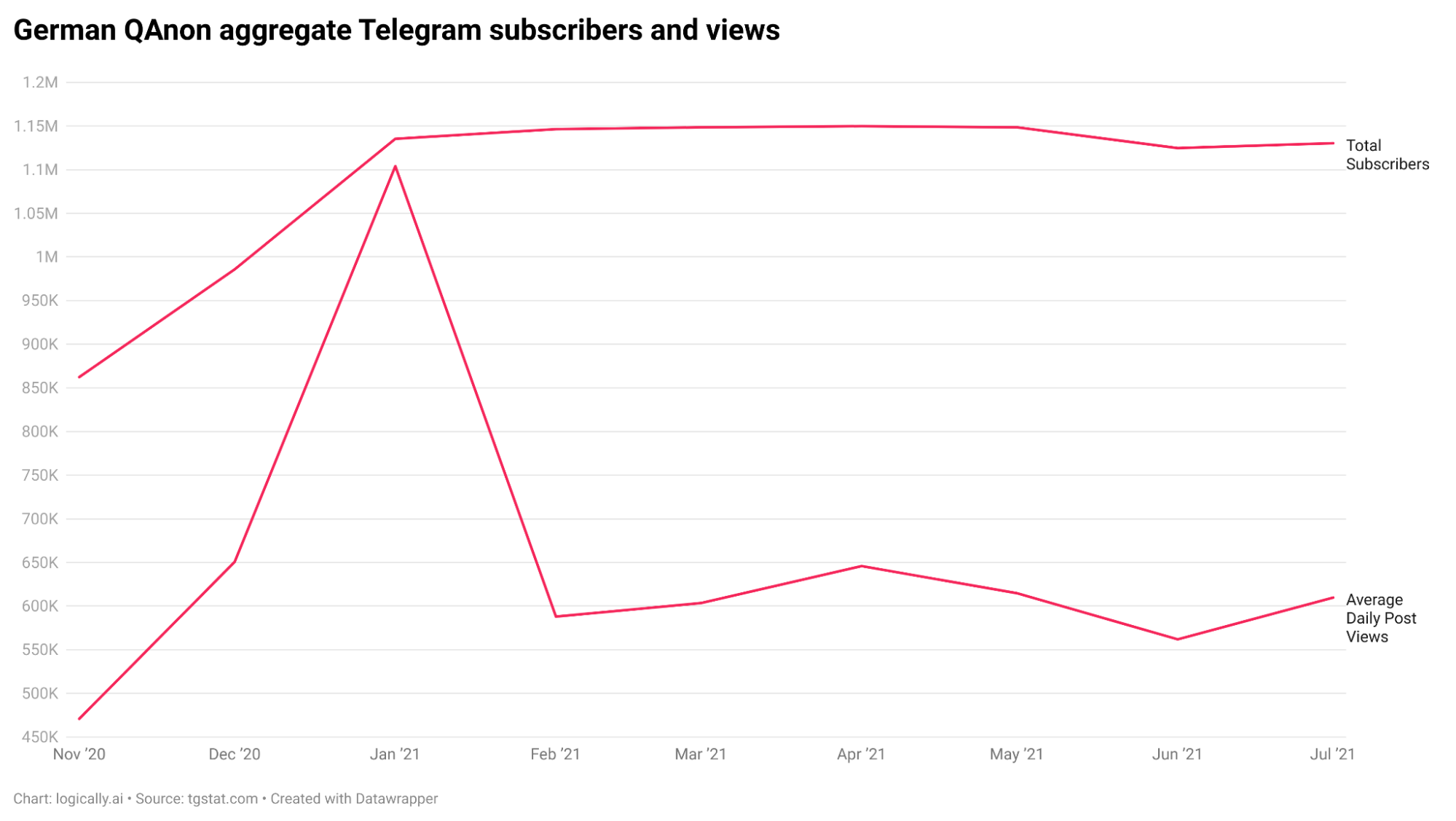 Because our research is the first of its kind in this region, there are no previous estimates for conspiracy theory and disinformation involvement to compare it to. Some experts and journalists had previously estimated that around 100,000 people believe in QAnon in Germany based on one QAnon YouTube account having that number of followers and that between 10-20 percent of Germans believe conspiracies about the COVID-19 pandemic.

This research suggests that the true figure for followers of QAnon and COVID conspiracy theories in the DACH region based on Telegram membership alone is closer to 1.5 million. Given that Germany’s population comprises around 83 percent of the population of the DACH region, our findings show how this previous estimate to be vastly out of date. The reality of participation in disinformation communities in Germany, Austria, and Switzerland is far higher than previously thought.

This article has been updated to reflect the fact that the period of growth for German Telegram channels in fact began in April 2020, rather than August as was previously stated. In April, QAnon Telegram chats went from being stagnant to doubling, from August they experienced a second period of growth.