Women Journalists in Pakistan Fight Back Against Gendered Trolling 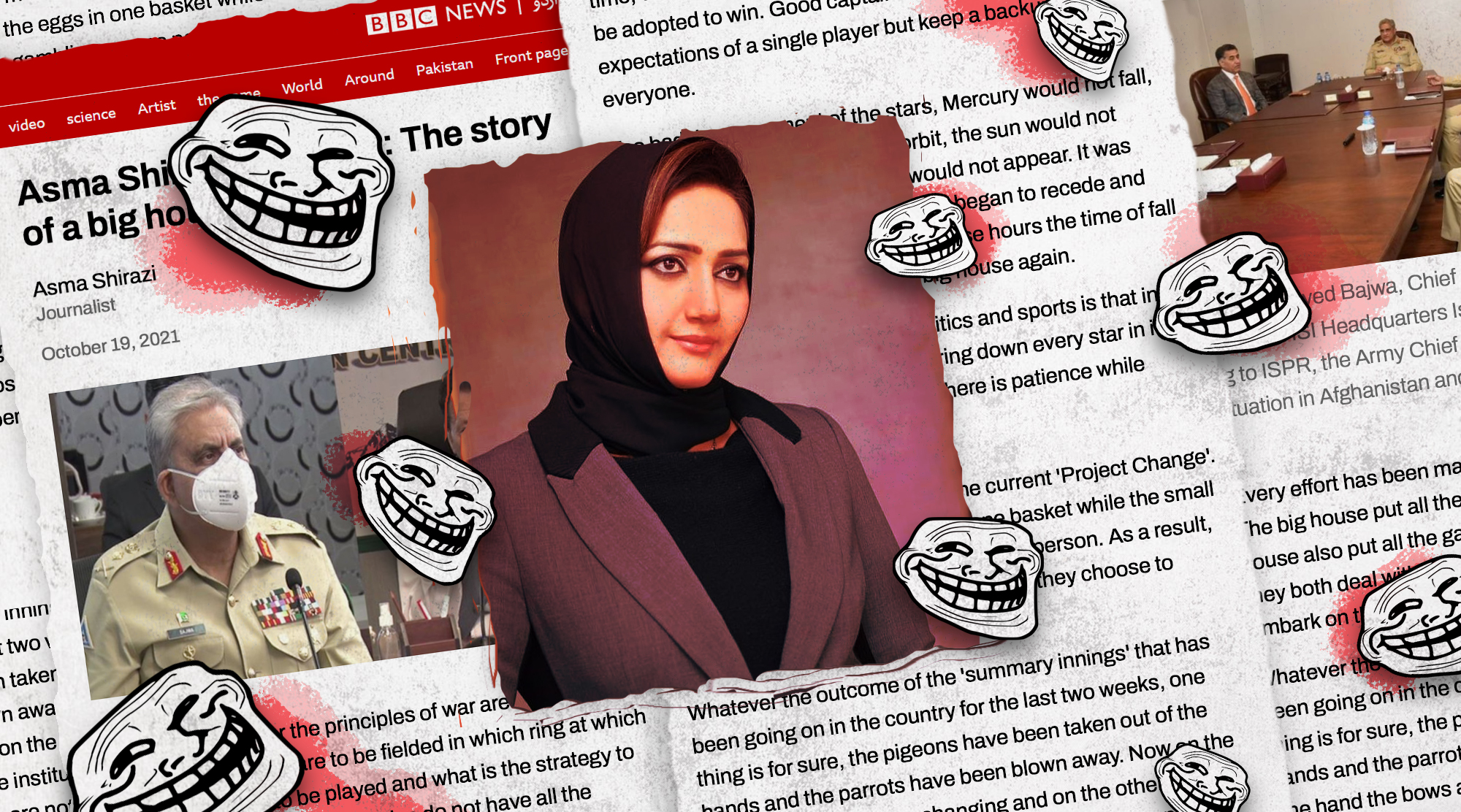 In October 2021, Pakistani journalist Asma Shirazi was targeted by a hate campaign after she published a column critiquing the current PTI government for the country’s economic downfall. Many interpreted the column as an attack on Prime Minister Imran Khan’s wife, and Shirazi was faced with the likes of the official PTI account, and senior politicians and journalists calling her out on Twitter. Amid the many official accounts that chose to use their platforms to incite hate against Shirazi were also anonymous trolls who jumped on the bandwagon in an effort to pull down the journalist for her work. Journalist Zofeen Ebrahim points out that in the barrage of hate, it was obvious that many were just simply joining the crowd: “When Fawad Chaudhry [Pakistan’s Information Minister] attacked her in his press conference, he made it such a big deal that it incited more hate against her despite people not having read the story. He even brought up the issue of her Hajj controversy, which she has apologized for, and he attacked her character.”

“I was very shocked about the level men can stoop to degrade a woman,” Ebrahim said.

Pakistan is ranked 145th out of 180 countries in RSF’s 2020 World Press Freedom Index, and a gendered look at the experiences of journalists only makes the situation more dire.

This wasn’t the first time Shirazi has been subject to targeted hate online. In July 2019, Shirazi was amid a group of journalists labeled “anti-Pakistan” led by anonymous pro-government accounts who called for these journalists to be arrested or lynched. Pakistan is ranked 145th out of 180 countries in RSF’s 2020 World Press Freedom Index, and a gendered look at the experiences of journalists only makes the situation more dire. Sadaf Khan, journalist and founder of Media Matters for Democracy — an organization focused on digital rights and advocacy in Pakistan — points out that while journalism is by no means an easy career for anyone in Pakistan, the sheer lack of numbers of women journalists in the field makes it exponentially harder to prioritize their rights and safety.

“If you look at the safety of journalists, there’s no work being done,” Khan says, adding that because there are so few women in newsrooms, “within that women journalists are an even smaller priority. I think it’s easier to intimidate women journalists. Women have to respond to dangerous situations in a very different way than men do. We grow up being told to ignore or remove ourselves from situations that are dangerous, so this talk of taking a stand or resisting is one of the things where women are not as equipped to do that as men would be.”

Targeted attacks against women journalists in Pakistan have increased exponentially over the last couple of years. Women journalists have been doxxed, hacked, and threatened with sexual violence. The increase in these attacks finally led to the creation of a petition on August 12th, 2020 that demanded safety and freedom of speech in the media, holding those carrying out these attacks accountable. The petition was signed by 165 journalists, and dominated most of the conversation around cyber safety for the last year or so. Prominent Pakistani journalists such as Mehmal Sarfaraz, Reema Omer and Benazir Shah were among those who worked on the petition, and the social media campaign has promoted hashtags like #IStandWithWomenJournalists in an effort to put pressure on the government to ensure better working conditions and safety.

But with Shirazi’s recent experiences simply being one of many, it seems like little action has been taken following the petition, despite the noise it seemed to have created. While the kind of threats and cyberhate that women journalists created the petition against aren’t new, it was the sheer intensity of those attacks that led to things finally coming to a head last year. Sahar Baloch, a journalist who’s been working in the media for 14 years, and has been working in broadcast at BBC Urdu for the last four, says she signed the petition because she saw it as a chance to speak about something. “After a group of journalists got rape threats they got together and created that petition and I also signed it because I thought when there’s a chance we should speak out about it,” she says while also adding that beyond starting a conversation little seems to have changed.

It's not like these attacks weren’t happening before, but the intensity has increased since 2018. If you’re doing a particular kind of journalism you're under attack by possibly government-backed trolls, and trolls from a political party.

As a journalist who’s covered all sorts of issues from human rights and social justice, to reporting on migrant communities and even terrorism, Baloch has seen some of the most dangerous aspects of journalism and is all too aware of the efforts needed to keep herself safe. Pointing out that working in Urdu media can be more dangerous than English in Pakistan because it reaches a larger section of the population, Baloch shares that she’s always found herself being careful of what she says. “It's not like these attacks weren’t happening before but the intensity has increased since 2018. If you’re doing a particular kind of journalism you're under attack by possibly government-backed trolls and trolls from a political party. We’ve seen an increase in allegations of being traitors to the country and it’s because there’s no check and balance, no security. It came to an extent where rape threats were given to women journalists who went to senate and spoke to Bilawal Bhutto Zardari, and no one took any responsibility.”

A fear for her safety, and the kind of hostility that any sort of potential controversy can garner online, has spurred Baloch to curate her social media presence morecarefully. “We’re adding other stuff to our reportage beyond terrorism and human rights and also covering it in a different way. I’ve shifted my focus to other topics. I’ve started doing travel, podcasts, learning digital mediums, and not doing one kind of story,” she says, adding, “I don’t share my opinions on social media because my organization does not allow me as anything we say on social media can be used against us. It’s a very well-orchestrated social media presence. I would never check in on social media, never kept my location on. These are some of the ways I’ve tried to protect myself and yes it has worked to some extent.”

Online, I do hold back from saying certain things or from expressing political opinions, probably from all the abuse I see hurled at my fellow community members.

She’s not the only one who finds herself relying on policing her own work as a way of self-protection. Despite much of Khan’s work revolving around human rights and digital advocacy, she says she often holds back online. “Apart from the aspect that deals with gender and sexual harassment, online I do hold back from saying certain things or from expressing political opinions, probably from all the abuse I see hurled at my fellow community members. Abuse against women journalists is highly sexualized and that’s not a position I would like to put myself in so there’s a lot of self-censorship at my end,” Khan says.

While political leadership and a growing realm of censorship are among the main reasons for the prevalence of online attacks against vulnerable groups, social media and the anonymity it provides facilitate these attacks. Ebrahim points out that this anonymity and subsequent lack of accountability gives trolls the courage to carry out such harmful acts. “They [trolls] think they can use any kind of language which they might not use face to face. They would never do it in front of their family members, or people in real life. These kinds of people feel safe in cyberspace to get away with anything against vulnerable groups,” Ebrahim points out.

With a clear lack of implementation of the few policies and protection laws that do exist, individual advocates and organizations have taken it upon themselves to create safety online and empower women to protect themselves. Seerat Khan, program manager at Digital Rights Foundation is leading a Digital Wellbeing workshop for women journalists from 18-20 November in Lahore, Pakistan which will focus on an awareness of laws present, how women journalists can ensure their own safety, and also psycho-social wellbeing. Seerat also advises journalists — or any woman with an online media presence — to implement certain protection measures, such as keeping your privacy settings and password strong, having two-factor authentication on all your accounts, being mindful of what you’re posting, and regularly screening your friend list. However, as journalist Sajeer Shaikh points out, the pressure these organizations face themselves can limit them from taking a more aggressive approach.

Male counterparts must also be trained to not only do better in their reporting, but seek out the female gaze in their stories as well.

When it comes to discussing the larger, leadership-level changes that need to take place, most women in the field approach the discussion with a certain sense of loss because so much time has gone by without any real change taking place. “Certain legal frameworks must be tweaked to make room for better journalism. Male counterparts must also be trained to not only do better in their reporting, but seek out the female gaze in their stories as well,” Shaikh says — but neither her nor many of her other colleagues are too hopeful that this will take place. She is referring to the laws around censorship in the country that make it much more difficult for those attacked to take a stand or practice freedom of speech.

Instead, there is a grudging and fearful acceptance that protection needs to happen individually and perhaps communally. That’s one good thing the petition has done, according to Khan. “What it did change was that it motivated women to collectivize in a way that wasn’t there before. It was a cathartic activity that motivated the creation of collectives and brought a lot of voices together,” she says.

The lack of autonomy and power given to women journalists in Pakistan has long seen them pushed into stereotypical boxes both locally and globally, and this petition started a conversation in taking that space back for themselves. Along similar lines, the start of such conversations has also motivated many to come forward with their experiences and talk about the toxicity and dangers of being a woman journalist. Despite the seemingly bleak situation, there is no doubt that these women have taken matters into their own hands, and will not wait for someone else to change it for them. Perhaps in the hope that their successors in the future will not have to worry about fighting the same fight.

Anmol Irfan is a Muslim Pakistani freelance journalist and the Founder of online Pakistani platform Perspective Magazine. Her work focuses on exploring global feminist movements, South Asian culture and more. She has previously written for Logically about digital narratives of Partition.

Imagine living in a country which is isolated from the world's economics and politics by the collusion between the European Union, NATO and the US. Your country suffers from unfair sanctions, but is strong enough to deal with the problems. Then a...