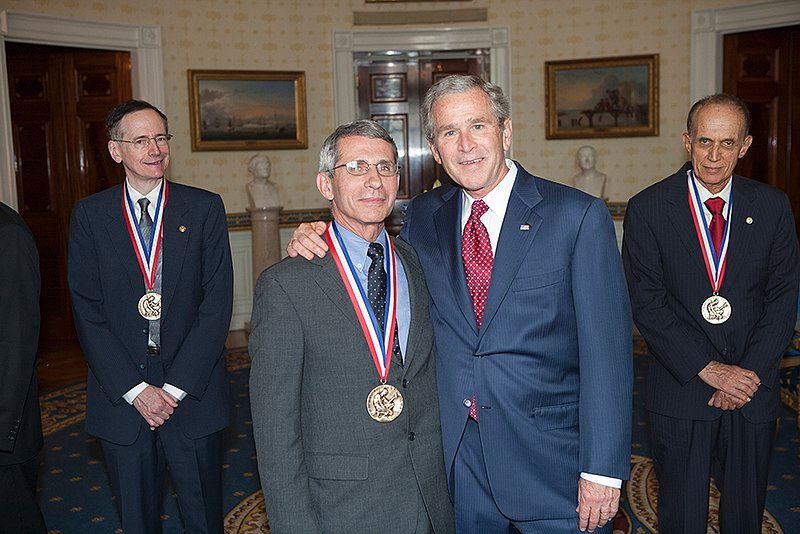 We previously discussed President Trump’s touting of a Covid-19 cure and how a shift in Trump’s position regarding the severity of the coronavirus pandemic could be a prelude to an attempt to paint his efforts to help the American people as being thwarted by bureaucracy. This narrative has gained traction over the weekend, after Dr. Anthony S. Fauci, director of the National Institute of Allergy and Infectious Diseases, appeared to facepalm in response to the President referring to the "Deep State Department" during his March 20 press conference. Some in the conservative media ecosystem have interpreted Fauci's exasperation as an attempt to undermine the president, and Fauci has since become a main target of those seeking the promote the story of the pandemic as another chapter in the struggle of President Trump to 'drain the swamp' of faceless, unaccountable bureaucrats.

The conservative blog, American Thinker, published an article on the day after the press conference, entitled “Anthony Fauci, the NIH’s face of coronavirus, is a Deep-State Hilary Clinton-loving stooge,” which included an email that Dr. Fauci had written praising Hilary Clinton seven years ago. Since then, a New York Times analysis found “over 70 accounts on Twitter that have promoted the hashtag #FauciFraud, with some tweeting as frequently as 795 times a day.” This has led to the hashtag #Faucifraud to trend on Twitter and YouTube conspiracy-theory videos about Dr. Fauci being viewed “hundreds of thousands” of times, including a video shared on Rudy Giuliani’s page claiming that a Dr. Vladimir Zelenko had successfully treated hundreds of patients using the medication promoted by Trump.

Carl Bergstrom, a Professor in Biology at the University of Washington who studies science communication (and is an excellent Twitter follow for those interested in medical misinformation), called the campaign a “concerted effort on the part of Trump supporters to spread misinformation about the virus aggressively.” Tweets using the #faucifraud hashtag have called Fauci a “Deep State Eugenic Tool” and claim to have uncovered a “Big Pharma” conspiracy, with several suggesting that Dr. Fauci was contradicting Trump in an effort to push an eventual vaccine that would be more profitable than the anti-malarial drug touted by Trump. Some have even pointed to a 2017 article about Fauci warning Trump about a “surprise infectious disease” to support the idea of a conspiracy (despite the fact that the possibility of such a disease was widely understood as a significant threat at the time).

While the discrediting of experts is nothing new among certain spheres of Trump’s following, this is a stark reminder of how impactful, opportunistic and brazenly political it can be. Dr. Fauci has served as head of the NIAID since 1984 and has advised presidents of both major parties (he is pictured above receiving the 2005 National Medal for Science from President George W. Bush). As reported in the New York Times article, a media analysis by Zignal Labs had found that “[r]ight-wing figures quoted Dr. Fauci approvingly or lauded him for his comments on shutting down travel to and from China” only a few weeks ago. But as soon as Fauci expressed views which couldn't fit the latest iteration of Trump's political narrative, his expertise was called into question. Fauci is now being accused of being a Democratic pawn in an attempt to make the president Trump look bad before the election.

There is much to be concerned about in these developments, but perhaps the most troubling is the speed with which it is now possible for an expert's opinion to become devalued simply because it is no longer politically convenient. We shouldn't pretend that this phenomenon is new; expertise has always been cherry picked to serve political interests. However, it is striking that in an age where hypocrisies and u-turns are easier than ever to establish due to the extensiveness and accessibility of political records, it also seems easier than ever to ignore one's own prior commitments to and reliance on particular experts when their expertise becomes inconvenient.

Thousands of teen users of the social network TikTok have claimed responsibility for the low attendance of Donald Trump’s re-election rally in Tulsa, OK on Saturday. Bolstered by fans of the niche musical genre K-Pop (which originated in Korea,...