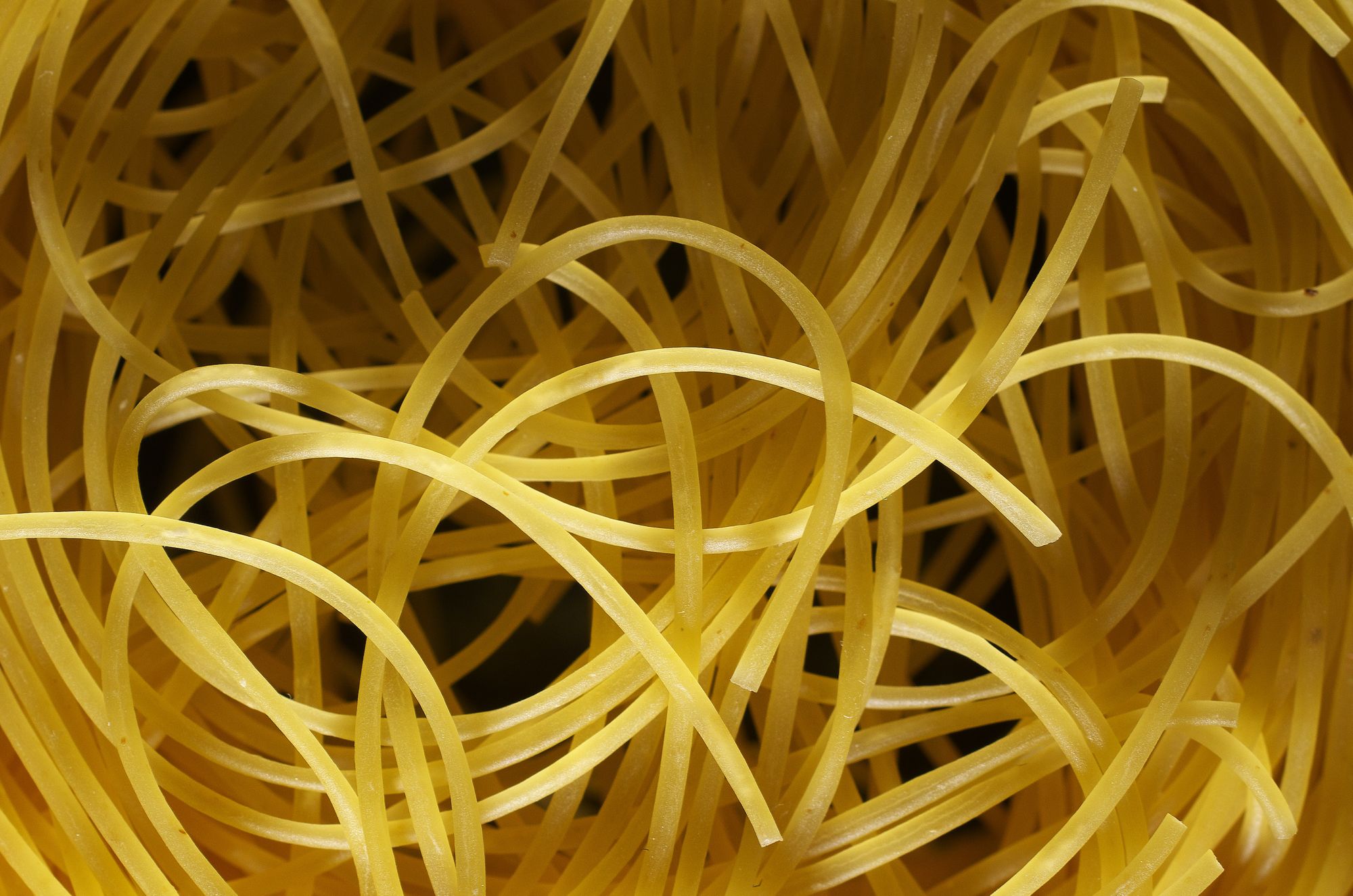 GQ magazine recently published a glorious series of interviews with Robert Pattinson, possibly humanity’s weirdest, most delightfully baffling celebrity. The article as a whole is a thing of beauty, but has attracted particular attention for its revelations about Pattinson’s insane, mind bending, possibly life-threatening pasta recipe.

Pattinson’s culinary inspiration stems from a stark, pressing question: What if “pasta really had the same kind of fast-food credentials as burgers and pizzas?” So far so… intriguing? But if the concept is basically coherent, the method is not. The interview goes on to describe Pattinson microwaving pasta, doing something with sugar and cheese that he describes as “congealing,” adding “any sauce,” encasing the entire thing in cornflakes in place of breadcrumbs, wrapping it in tinfoil, and microwaving it. If you haven’t yet read it or need to refresh your memory, now is the time to do so.

Here at Logically, we are committed to knowledge, to proper digestion (sorry) of media, and most importantly, to the unflinching pursuit of the truth. This being the case, when we heard about the pasta recipe from hell, my colleague Joe and I decided to fact-check it.

We contacted some honest to god adults, with relevant qualifications, and jobs, and better things to be doing with their time, and asked them if they thought the recipe was possible, or if Pattinson had truly lost his mind.

First up is Olivia Potts, chef and author of A Half Baked Idea, how grief, love and cake took me from the courtroom to Le Cordon Bleu.

Olivia, thanks so much for helping us assess this urgent issue. Is Robert a genius or a dangerous lunatic?

I read the piece with my mouth hanging open. I genuinely don’t know what Robert was trying to achieve, or why, or why he’d do it in the way he did. I think, if it wasn’t for the sugar, I’d be tempted to say genius, just because I don’t understand it, but once sugar became involved, I’m sorry, he’s a dangerous lunatic.

As a fellow creative food professional, do you have any insight into Robert’s process?

I feel like the flash of genius that Pattinson had where he suddenly envisaged pasta as a handheld fast food was like the kind of thing that comes to you in the hours between sleep and waking, and you make a note on your phone so future you doesn’t forget your entrepreneurial inspiration, but then you look at it in the cold light of the day and think ‘cold brew hair straighteners?! What was I ON?’

Cornflakes instead of breadcrumbs. I feel instinctively like it’s not possible for this substitution to work but I’d love to be told I’m wrong?

Ok, this bit isn’t totally off the wall. Well, it is, but not in the context of his other choices and decisions. Cornflakes are not an uncommon substitution for breadcrumbs, albeit in slightly different types of dishes – cornflake ‘breaded’ chicken is a common American dish, giving crunch and color and, I guess, a corny flavor, to chicken goujons or nuggets. You do need to crush them for that, and then fry or oven bake the dish, and I’m still not quite sure exactly what role they were playing here.

WHAT is the sugar supposed to do?

I trained in patisserie. I’ve used a lot of sugar in a lot of different ways, but I have categorically never layered it with cheese, or used it to ‘congeal’ pasta? Sometimes you use a very small amount of sugar to take the metallic taste from tinned tomatoes in a pasta sauce, but this… this is something else. Is he candying the pasta? I just don’t understand it.

At one point Pattinson becomes very insistent that there is a specific type of pasta that this works with, he describes it as “a squiggly blob,” and “sort of messy…like, the hair bun on a girl.” Are you able to shed any light on what kind of pasta he means?

So, I’ve given a LOT of thought to this, and reread Pattinson’s description many times. I think he means farfalle: the bow-shaped pasta, with crinkly edges. I hope Pattinson will forgive me when I say that, within this interview, precision is not his strong point, so I’ve decided that when he says ‘the hair bun on a girl’ he doesn’t actually mean a bun, but a ponytail, where the pasta bow cinches in – and if you squint, farfalle does *kind* of look like a squiggly blob.

Do you think he’s onto something?

My husband was desperate for me to give the whole thing a go, see if it worked, or if I could make it work. Thankfully we don’t actually have a microwave so I had a ready-made excuse not to waste a shit-ton of ingredients in the pursuit of emulating a fever dream.

Have you ever tried to innovate in the kitchen to anything like this extent? Do you have any similarly outrageous recipe ideas?

Absolutely not. If this is innovation, I want no part of it.

The next part of our investigation required a microwave expert. Nigel Wright has 13 years of experience in both industrial and domestic electric engineering. We asked him some questions to get to the bottom of the microwave’s role in Pattinson’s recipe, specifically the explosion bit.

Hi Nigel, thanks for stepping in. What is it about tinfoil in particular that doesn’t mix with microwave cooking?

So microwaves work by agitating the molecules in whatever you want to cook through the energy in the wave. Usually this means agitating the water molecules in whatever you’re cooking first, causing the food to heat up. But because foil is metal, it causes a charge instead. If it was a thick metal it could heat up slowly, but since it's a thin metal, that charge can't be stored – it has nowhere to go. So it arcs in the air in the microwave causing sparks, and worse.

Do you think the explosion caused in the article is plausible?

Definitely. It’s perfectly feasible that foil in a microwave could cause an explosion as spectacular as the one written about. There are videos on Youtube where people try it out, but most chicken out after about 30 seconds. If you were to leave it running, it would expand the air inside the microwave and the energy would have nowhere to go – it could easily blow the door open.

Should we try it?

So there we have it, the physics and the cookery elements of the recipe are certainly bizarre, but according to our experts they check out. As to whether the experiment truly took place, we have only Pattinson’s and the interviewer’s testimony. So, what’s our verdict? Honestly, it doesn't really matter if this story is true; it's the greatest comedy writing of the lockdown so far. *Chef’s kiss*

You can (and should) buy Olivia’s book here, and read her blog here. We suspect Nigel would rather we left him alone now.

UPDATE: An eagle-eyed twitter follower has noted that the kind of pasta Pattinson means is possibly angel hair, rather than farfalle. We consider this to be extremely plausible.

Climate Change Misinformation in the Age of COVID-19

Climate change has been widely acknowledged as the gravest threat that human civilization has ever faced; this was true before the pandemic, and it is still true now. What has changed since the onset of the COVID-19 pandemic, however, is that we...