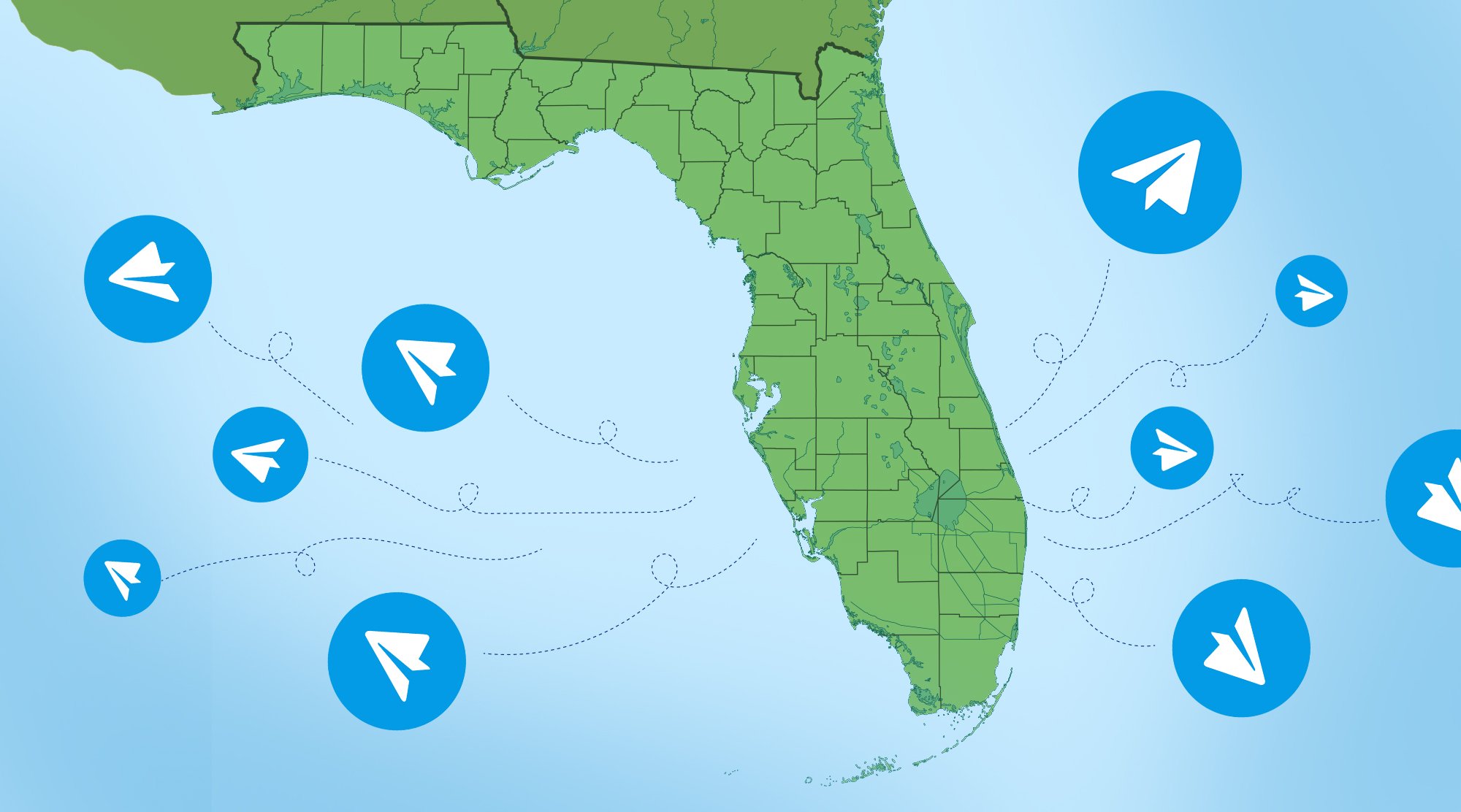 Logically, as part of our mission to understand and counter harmful online misinformation, conducts continuous research into the networks, channels, and actors that play an outsized role in spreading misinformation and conspiracies. One element of that research program is working to uncover the identities of those who leverage online anonymity to avoid accountability for spreading misinformation and hate speech. GhostEzra is the most extreme, and arguably the most influential such figure that the investigative team has uncovered to date.

GhostEzra, who first appeared online at the end of 2020, has made claims about Jewish control of Big Pharma, the media, and central banking. The account has also claimed that Jews are responsible for both world wars and that the people who “identify as Jewish but are not actually even Jews” have a goal of “total world domination and control.” He has linked his followers multiple times to neo-Nazi propaganda, including a 12-hour film that, among other claims, asserts that Jews created communism with a goal of “total world domination.” As a result, the comments under the account’s Telegram posts now effectively function as a neo-Nazi discussion forum.

Over time, the QAnon influencer’s account has moved from coded antisemitism to posting explicit Nazi propaganda, including outright Holocaust denial and a slew of conspiracy theories that often range from obliquely to explicitly antisemitic. GhostEzra’s conspiratorial interests range widely, with posts touching on conspiracies about the 2020 U.S. election, COVID-19 denialism, claims that Joe Biden is dead and has been replaced by an actor, and that a variety of female celebrities and politicians are actually men.

The man behind the account, Robert Smart, is an evangelical Christian and serial entrepreneur who attends several churches in his local area. He appears to have previously operated at least four other QAnon Twitter accounts, each set up within a day of its predecessor being suspended and each sharing similar identifiers, including almost identical bios, and a similar writing style. All of the accounts identified by Logically as his in some way invoked the identities of individuals frequently lauded by QAnon adherents as significant players or bringers of "the storm," such as Michael Flynn, Sidney Powell, or Ezra Cohen-Watnick.

In the case of the GhostEzra persona, theories that the account belonged to Ezra Cohen-Watnick resulted in his attorney releasing a statement on Twitter denying Cohen-Watnick was involved, which read, “There is a GhostEzra account on Telegram. The usual conspiracy laden QAnon garbage. This is NOT my client @EzraACohen. It is an impersonator & we have asked that the account be removed. Wake up already people. Stop believing everything.”

The faction who follow him closely will be drawn deeper into his ideological bubble, which consists of anti-trans, anti-vax, antisemitic, and white nationalist content. Once these sorts of views become normalized and become part of your everyday consumption, it is not difficult to find other channels and groups on Telegram that are much darker and more dangerous.  - Amarnath Amarasingam

GhostEzra was eventually banned on Twitter on the 8th January 2021 with a follower count just shy of 26,000. The first post to his Telegram channel was a mere two days later.

By March 2021, GhostEzra’s channel on Telegram had grown to over 300,000 followers and began racking up a slew of criticism from other QAnon influencers due to the outwardly extreme views expressed there, resulting in accusations alleging that GhostEzra was an agent provocateur who had “infiltrated” QAnon. “Do you see how disinformation ruins our movement?” one QAnon influencer posted referring to GhostEzra, with others saying he “told his subscribers to make antisemitic comments all over Telegram to smear the truth movement.”

As such, GhostEzra appeared to operate independently of other QAnon influencers, said Amarnath Amarasingam, assistant professor in the school of religion at Queen’s University, adding that GhostEzra began “routinely bad mouthing and separating himself from others on the far-right.” As such, Amarasingam believes that the account achieved a degree of separation from other QAnon influencers. “Like with all movements, you are going to see factionalism once the main “leader” goes away, and the fault lines of this factionalism usually have to do with “purity”. [GhostEzra] routinely criticizes other influencers as basically sellouts, as not true to the heart of the movement.”

GhostEzra’s channel also served as an ideal venue for further radicalization of disenchanted QAnon adherents, according to Amarasingham: “for one, the faction who follow him closely will be drawn deeper into his ideological bubble, which consists of anti-trans, anti-vax, antisemitic, and white nationalist content. Second, once these sorts of views become normalized and become part of your everyday consumption, it is not difficult to find other channels and groups on Telegram that are much darker and more dangerous.”

Despite GhostEzra’s true identity long eluding QAnon adherents and conspiracy researchers alike, Logically was able to reveal GhostEzra’s identity by following a trail of open-source intelligence leads to determine the identity of the person posting as GhostEzra.

On January 16, 2021, GhostEzra posted to their channel that they had been bowling that night, taking a detour to drive past the JFK Medical Center on the way back. This post did not mention the location of the medical center; in an earlier reply on Gab, however, GhostEzra had mentioned living in Florida.

Though GhostEzra often reposts images taken from elsewhere on the internet to his Telegram channel, a small number of images appear more likely to be originals. On a number of occasions, GhostEzra posted photos of Florida Emergency Alerts Systems displayed on a television set, narrowing down possible locations.

The photo below is a screen capture from a video that was posted by GhostEzra in February. We have edited it with exposure and levels adjusted to illuminate the surrounding area and reveal more about the interior of the poster’s home.  The plant and media center are distinct markers that come into play later in our investigation. 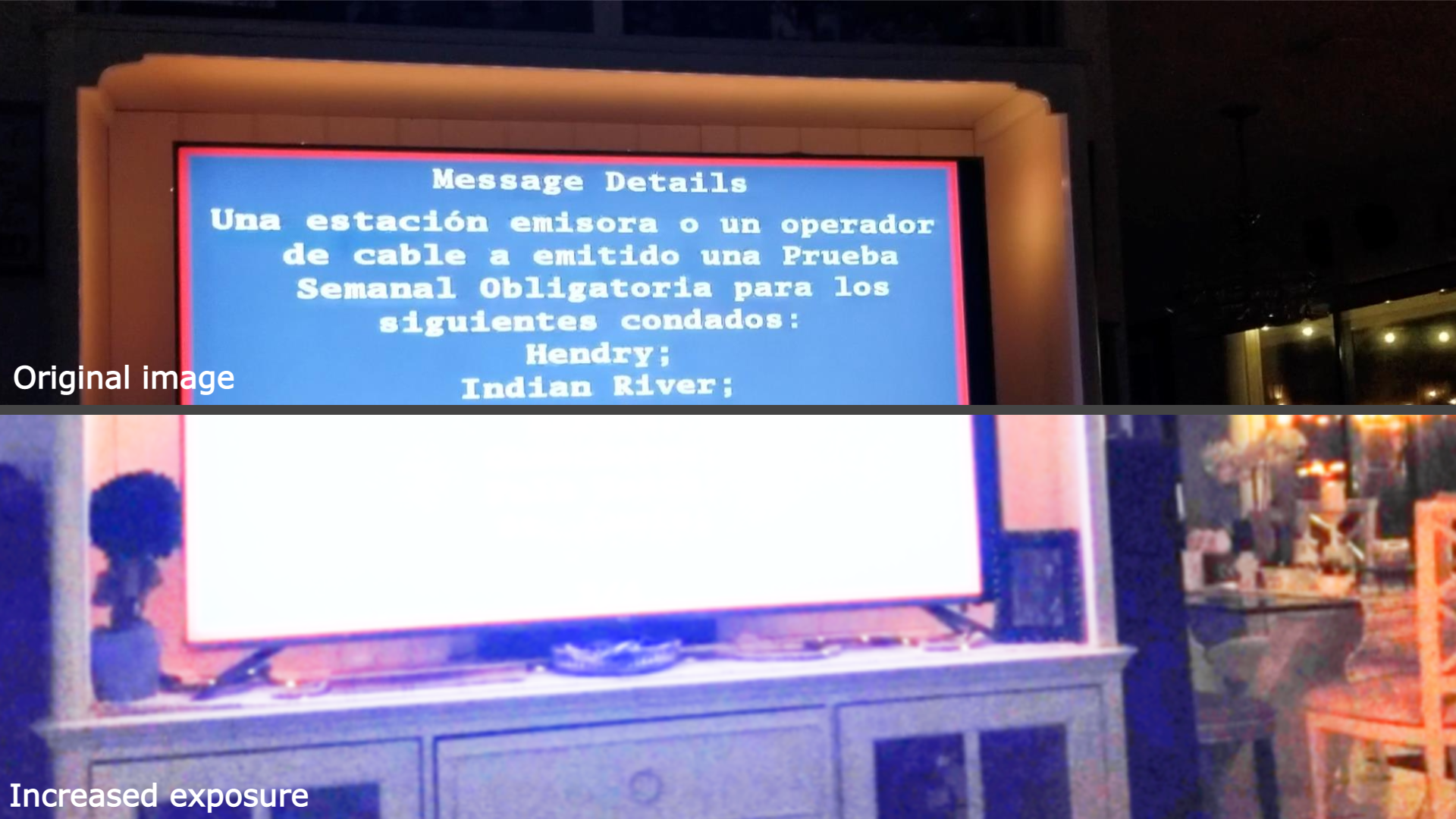 On May 17, 2021, GhostEzra also posted a close-up picture from a gas station at night time in a post about rising fuel prices.

By looking at U.S. national averages and trends for gas prices, we were able to narrow the location of the gas station in the photo down to three possible states. GhostEzra’s posting patterns also suggested that they were located in the Eastern U.S. time zone. This information enabled us to identify the exact location of the gas station pictured to be St Andrews Boulevard in Boca Raton, Florida. 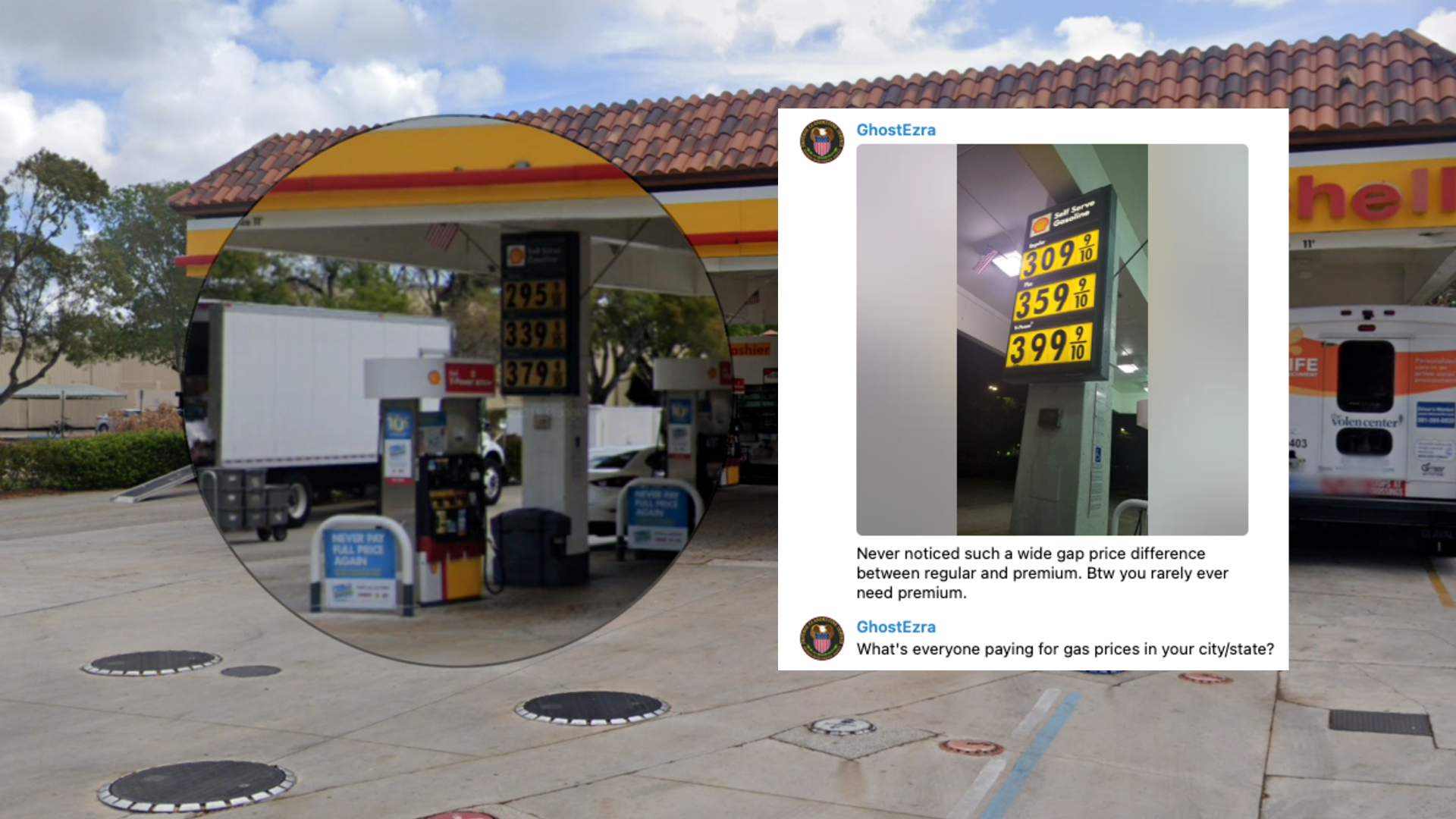 The map below shows an area between the JFK Medical Center, the Shell station, in Boca Raton, and a possible bowling alley that GhostEzra may have visited.

Alongside photos shared from a variety of sources to the GhostEzra Telegram channel, a number of screenshots of a specific Android phone were posted which appeared to be originals. This provided further ways to narrow our search, by referring to certain apps and services they used which were visible in the phone's status bar in the posted screenshots. On the first of March, GhostEzra posted a screenshot of a YouTube livestream he was viewing. In the bottom-left corner, “Chat publicly as Robert S...” was displayed in the livestream chatbox featuring a black silhouette and a question mark as a profile picture.

With this information, we were able to identify Google and Yelp review accounts, where a Robert S with the same profile picture had posted over 100 reviews in the Boca Raton area, including a review of the Shell gas station that was included in the GhostEzra post, as well as a number of restaurants, amenities, and other locations in the area. Notably, Robert S reviewed the local Jewish Center with one star, writing “not nice.” 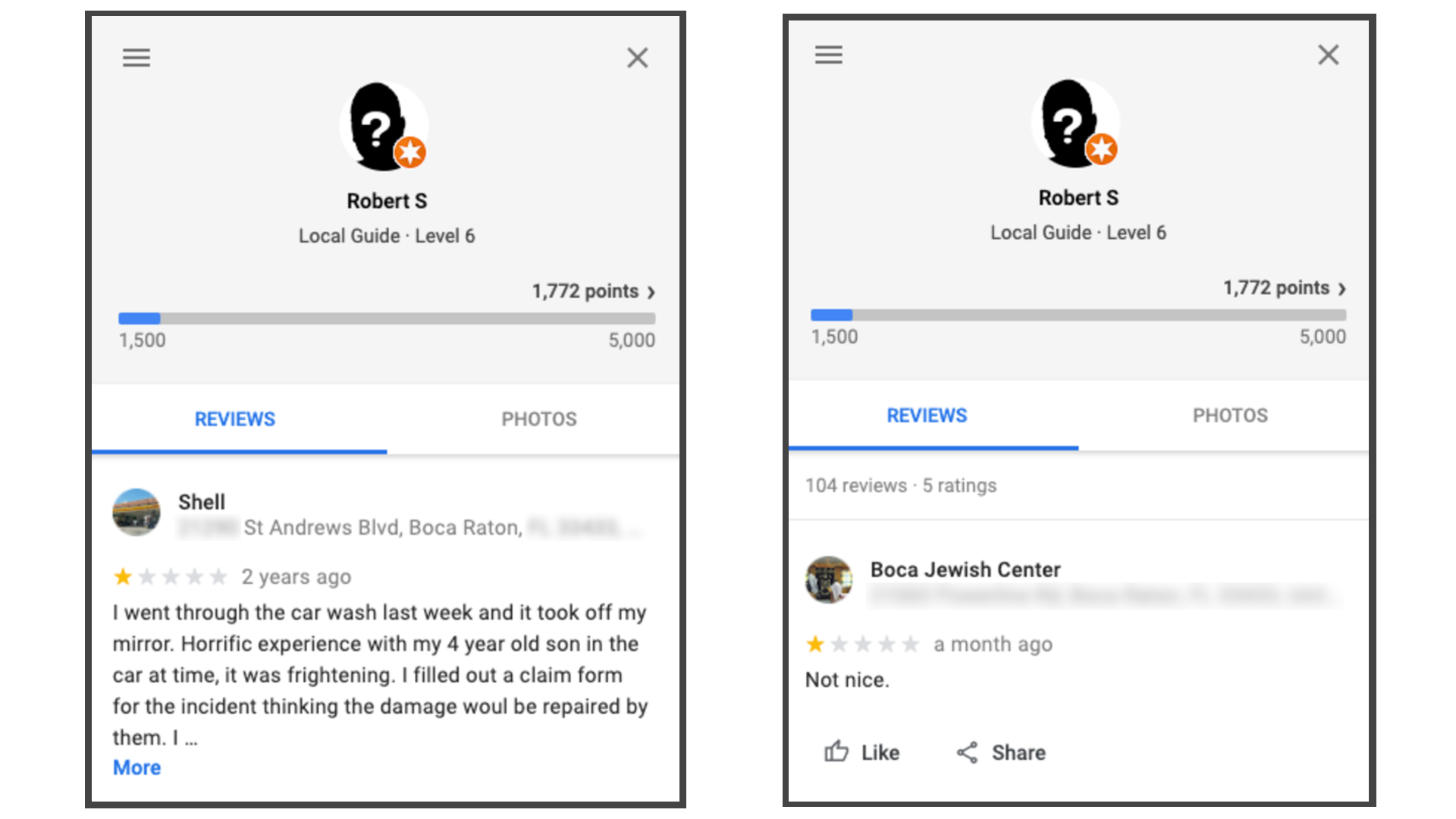 Images and videos from inside the Smart household show a media center, TV, and a distinct small plant to the left which are consistent with several images and videos GhostEzra has posted to his Telegram channel such as the “emergency alerts” clip. In another photo, Smart can be seen standing in front of the same media center and distinctive plant, wearing a “45” baseball cap.

While a number of screenshots posted by GhostEzra — particularly of YouTube livestreams he was viewing — included possible alternative accounts, the Robert S account shared images with a number of common matching identifiers as uploaded by GhostEzra. It is unclear if all of the other accounts belong to GhostEzra, or if some of the screenshots were stolen to obscure his identity.

In October 2020, Smart attended the Donald Trump Jr.’s Fighters Against Socialism tour “with his Colombian wife and their small son,” and was quoted in the South Florida SunSentinel about the spread of socialism: “It starts small. A little bit here and a little bit there, and it turns into a Venezuela."

Researchers have warned that QAnon is an inherently antisemitic big tent conspiracy that can easily radicalize believers further. Contemporary cult and extremism expert Sarah Hightower notes that GhostEzra’s Telegram channel couples a “notably large audience coupled with a steady stream of content that merges common QAnon takes with much more hardened antisemitic rhetoric. While much of the focus has been on the overall antisemitic nature of the channel's output, it bears repeating that quite a few posts include explicit neo nazi talking points.

“These examples go beyond what one might consider more "mainstream" or diluted antisemitic stereotypes and dogwhistles. This rhetoric is closer to the modern KKK and neo nazi skinhead groups of the 80s and 90s. It's important to note the distinctions,” Hightower emphasizes.

GhostEzra rose to greater prominence after the January 6 storming of the Capitol building.  “Since the Twitter crackdown, GhostEzra has quickly become one of the biggest influencers in the QAnon community by weaving together a tapestry of blatant antisemitism, transphobia, and outrageous conspiracy theories,” says Mike Rothschild, writer for the Daily Dot and author of The Storm Is Upon Us. “And in keeping with the Q community’s discarding of the iconography of Q itself, these violent and hateful theories are presented with a “just asking questions/seeking my personal truth” sheen that makes believers think they’re part of something grand and forbidden. With a huge and vocal following that grows by the day, GhostEzra has emerged as a potential leader for a community desperately in need of one.”

Logically investigators reached out to Robert Smart for comment on his role in the GhostEzra accounts. At time of reporting we have not received a response.

On December 13, 2019, the Dravida Munnetra Kazhagam (DMK) and the Bharatiya Janata Party (BJP) argued in Lok Sabha about the origins of the Tamil and Sanskrit languages. While moving the Central Sanskrit Universities Bill 2019 for passage, Minister...

As ongoing crises like the climate emergency, global fascism and the pandemic continue unabated, people are desperate to find order in the chaos. A slurry of wild conspiracy theories abound, and any kernel of truth becomes entangled in a mesh of...