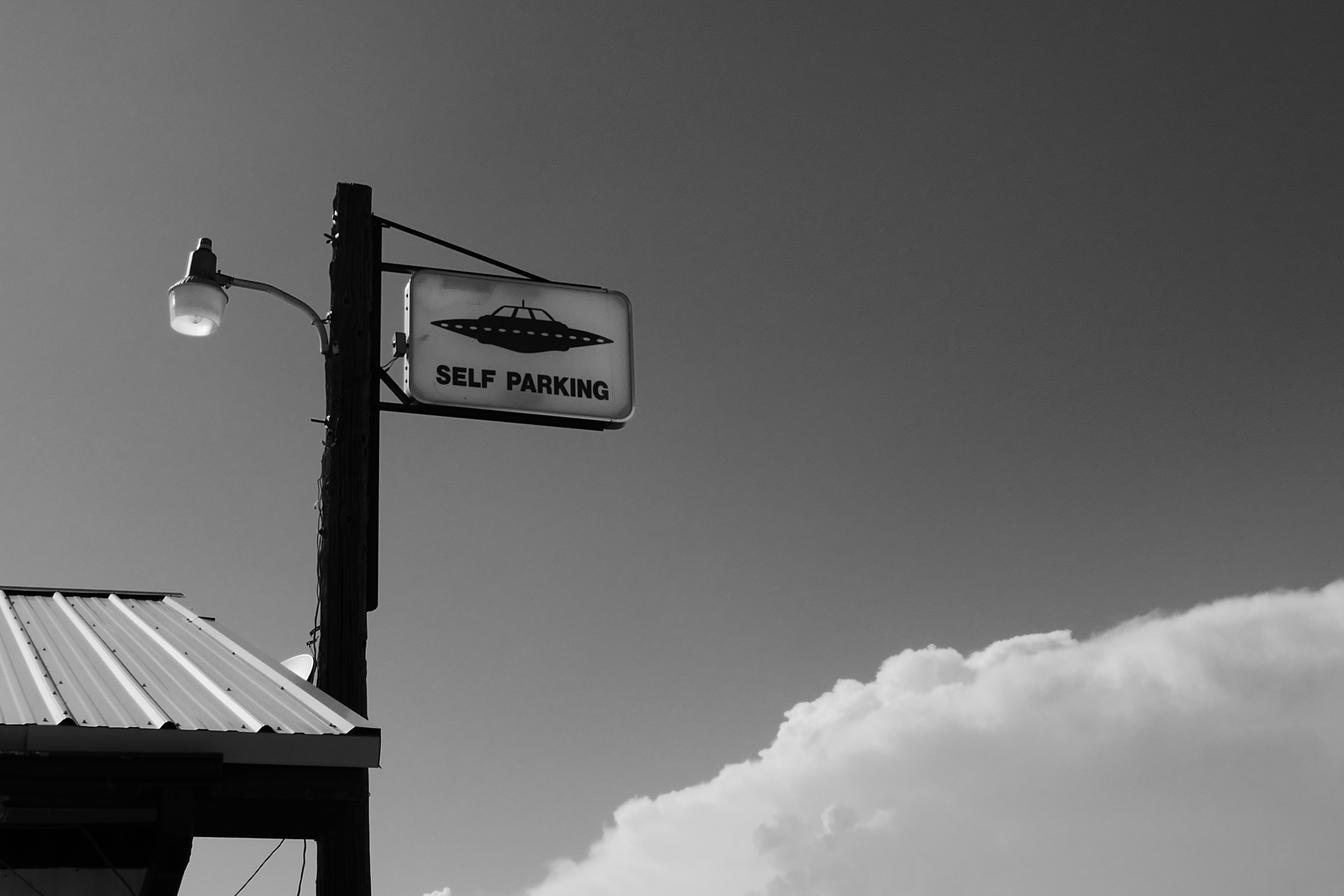 A Logically investigation can reveal that a Kentucky-based documentary filmmaker, who collaborated on a 2018 conspiracy documentary with notorious QAnon influencer Jordan Sather, created a social media account that went on to anonymously promote QAnon material to hundreds of thousands of followers. At the time of the account’s ban from Twitter, qthewakeup counted over 140,000 followers and had over the years espoused various conspiracy theories and tweeted content targeting public figures such as the Clintons, George Soros, and Greta Thunberg. qthewakeup, whose Twitter bio described them as the “creator of the WWG1WGA Worldwide video movement,” also played an influential role in the spread of the conspiracy theory that Wayfair was using its website to sell children after a post from qthewakeup’s Instagram account, which counted nearly 200,000 followers at the time of its deletion, received more than 200,000 likes and thousands of comments. According to DFR lab, qthewakeup was also among QAnon accounts "at the center of the community clusters discussing the Plandemic conspiracy on Twitter." In April 2020, qthewakeup was even featured in two separate drops written by the anonymous poster known as Q on the imageboard 8kun, both of which linked to the qthewakeup Twitter page. 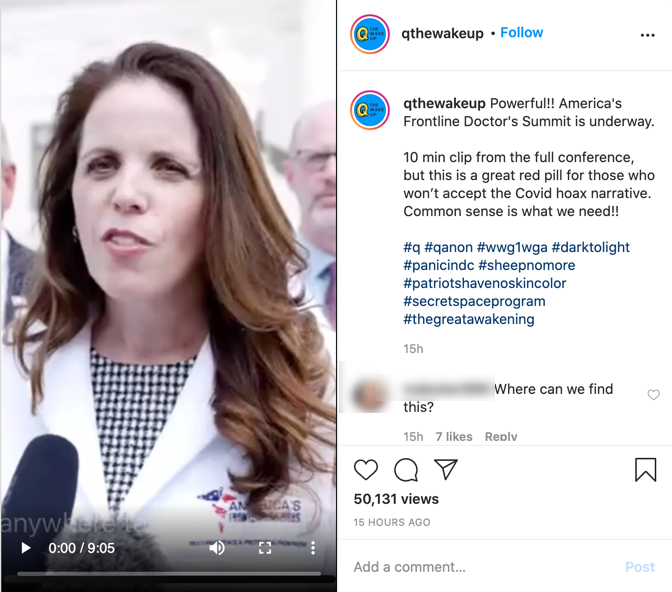 In a November 2019 tweet directed at Hillary and Bill Clinton, qthewakeup baselessly accused them of “literally rap[ing] children” and the “Clinton Crime syndicate” of murdering dozens of people. The account had also promoted an array of similarly baseless conspiracy theories, such as the idea that Luciferians, supposedly descendants of Nazi scientists possessing advanced technology from evil extra-terrestrials, had infiltrated the modern-day U.S. government. Footage shot by qthewakeup was also featured in Joe M’s "Q - The Plan to Save the World," a 2018 video from a propaganda series that experts say is responsible for converting many to QAnon.

The Twitter account using the qthewakeup handle was created by  Jeremy (JJ) Sicotte, a Berklee College of Music graduate and vocalist in several 2000s pop punk bands from Vermont who moved to California in 2007 where he eventually pursued a career as a filmmaker. Formerly a researcher for the American Paranormal Research Association, Sicotte collaborated with QAnon influencer Jordan Sather — who claimed that coronavirus could be cured by drinking a bleach-like cleaning agent — as a cinematographer on the 2018 film, Above Majestic, and was once also featured in an episode of Ghost Adventures on the Travel Channel.

In April 2020, after qthewakeup was mentioned in a Q-drop, Sather tweeted a congratulatory message: "My good friend just got Q'ed,” Sather wrote in a tweet, which was later retweeted by qthewakeup. “He helped me film Above Majestic,” the tweet added. “You go brother. Teamwork makes the dream work! WWG1WGA." Two days later, Q posted another link to qthewakeup’s Twitter account. “Hot damn!” tweeted Sather, “@qthewakeup with his second Q in three days!! This is my homie who helped me film Above Majestic and edits some vids for me! He’s got a dope Instagram too.” 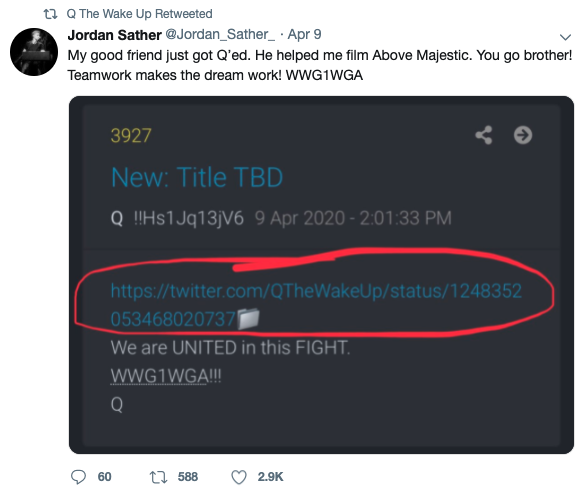 Originally created in 2009, the qthewakeup Twitter account first used the handle “jjfromjupiter” (Sicotte’s band at the time was called From Jupiter) and after a lengthy absence from Twitter, the account returned in March 2019 under the handle “jjin5d” and immediately started espousing various conspiracy theories and interacting with established QAnon influencers such as Sather and Joe M. The shift attracted concern from someone who had known Sicotte from his time with From Jupiter and worried that the account had been hacked; they were, however, promptly blocked and the following month the handle was renamed qthewakeup. 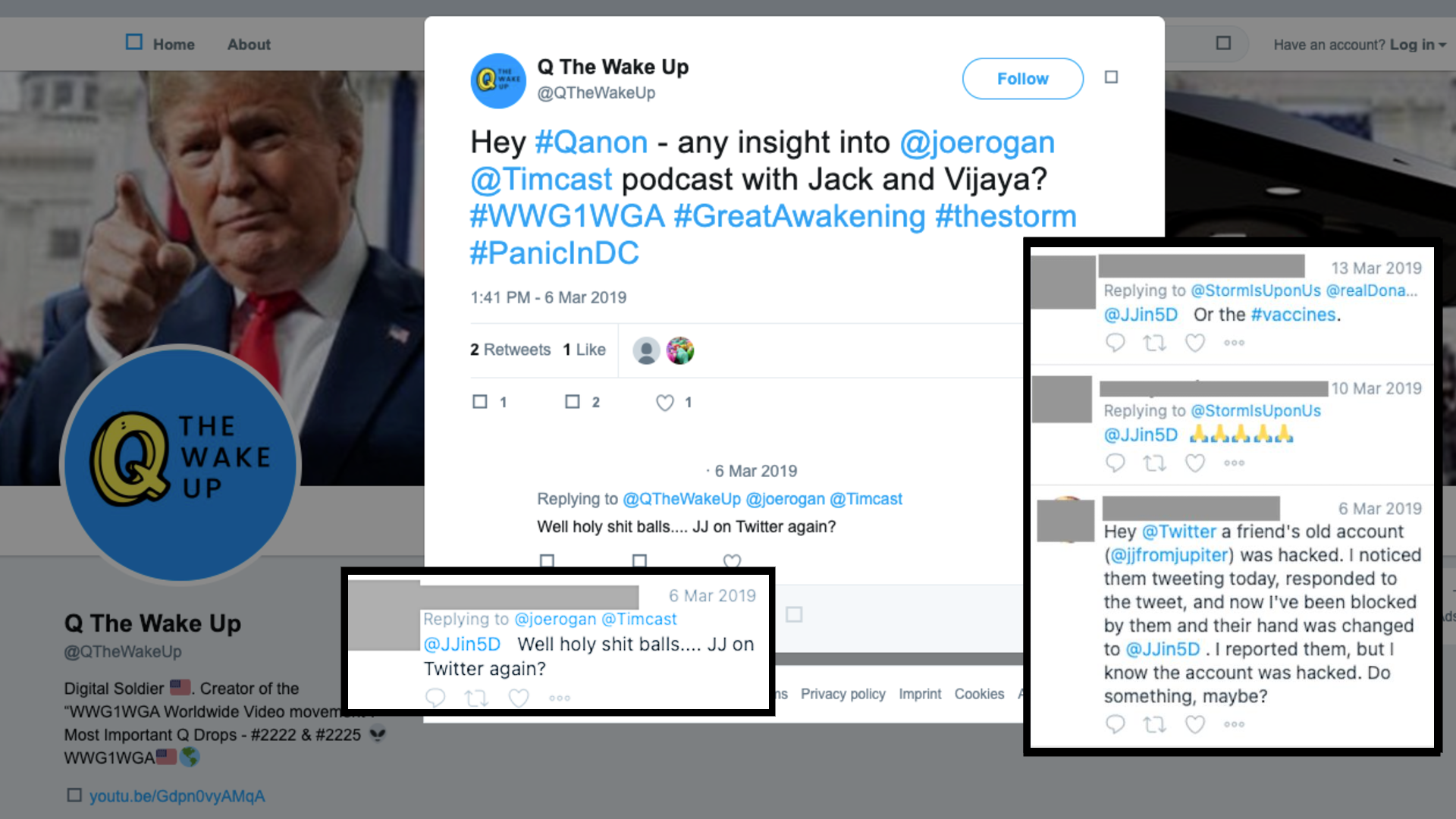 (A tweet archived on June 16th 2020 and the original reply. jjin5d was renamed qthewakeup in April 2019, which is why qthewakeup appears in the archived version and jjin5d in the original.)

We were able to verify that the qthewakeup Twitter account was – until its deletion – registered to a phone number and an email address belonging to Sicotte and that a WhatsApp account with Sicotte’s phone number still uses the qthewakeup profile photo—a large and stylized letter Q— as its display picture.

It appears that the holder of the qthewakeup account on Instagram had a history of using back-up accounts to avoid bans on the platform. In Sather’s congratulatory tweet to qthewakeup,  he links to an Instagram account called the_wake_up_q, which in May 2020 seems to have been replaced by qthewakeup—an account that used the same artwork—though it is difficult to say whether this was a result of a username change or a separate account. After qthewakeup was banned from Instagram, it returned as qthewakeup2.0, again using the same artwork, posting a photo that read "Main Account Suspended and a caption saying "Can't stop, won't stop.” Later, it returned to Instagram under the username woke_moms. Interactions with qthewakeup accounts on various platforms suggest a consistent and unique male poster. 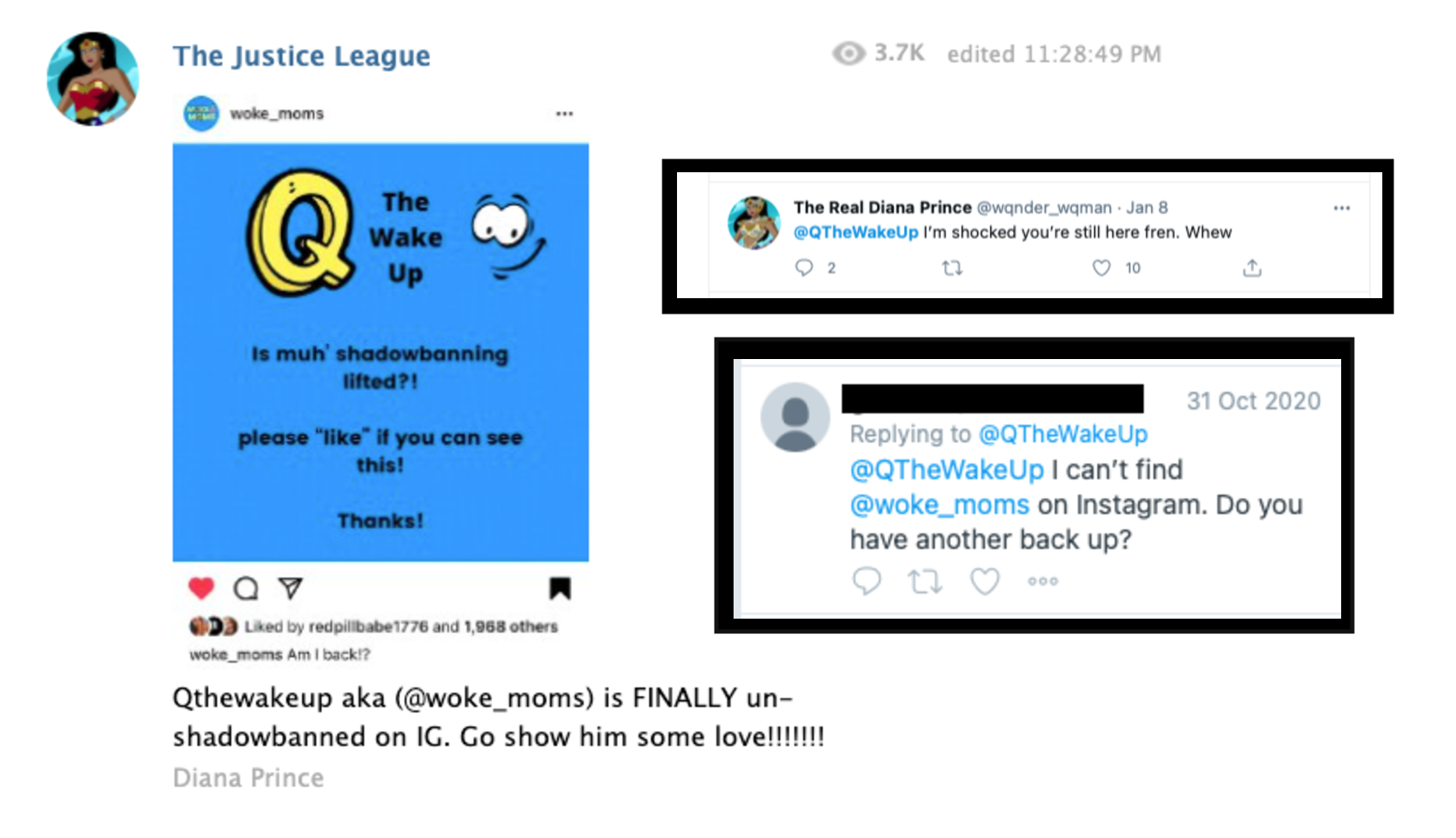 When reached for comment by Logically, Sicotte denied ever taking part in qthewakeup or supporting QAnon and claimed that Jordan Sather had merely used his contact details—with Sicotte’s permission—to evade a Twitter ban, and that he now regretted ever allowing him to do so. “I worked as director of photography on a film in 2018 called Above Majestic that Jordan Sather produced,” Sicotte told Logically. “Jordan and I remained friends over the years, where I did various editing and marketing work for his destroying the illusion and conscious strength brand. Jordan had multiple accounts taken down over the years and asked if he could use my email to help setup backup and alternate accounts. Hindsight, I regret allowing him to use the email - as I felt his work was provocative but harmless. That’s as far as my ties to this goes. I’m not involved with ‘Qanon’, nor do I want to be.” 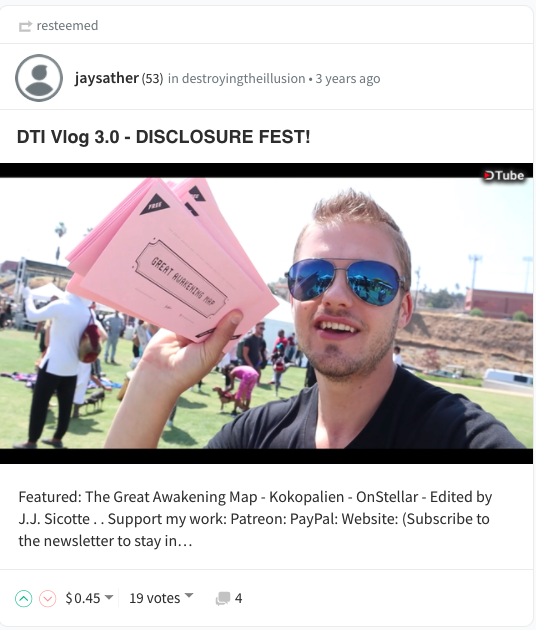 Sather subsequently contacted Logically to also claim that he had created qthewakeup using Sicotte’s contact details so that he and others could work around bans from Twitter, but when invited to comment on the interactions between his main account and qthewakeup, and the qthewakeup account’s 2009 creation date, Sather did not reply. When Sicotte was asked whether he thought Sather had tried to impersonate him after he had let him use his account, he did not offer an opinion.

Though Sather claims to have been one of several operators of qthewakeup, he has frequently interacted with and referred to qthewakeup in ways which suggest that qthewakeup was run by a single person other than himself. In a February 2021 video published on his Rumble channel, Sather discusses an upcoming podcast he will be hosting with his “very good friend” who is “the brain behind the qthewakeup account.” “You may have seen his account on Instagram or on Twitter,” Sather says in the video. “It was a pretty prolific account, too. He had a few hundred thousand followers. He got his Twitter account Q’d a few times. But anyway, it’s going to be him and I—he still wants to remain anonymous, so no name and face, at least for now—but anyway, me and qthewakeup will be working on a podcast, and it’s going to be fun.”

The 2018 film Above Majestic begins by exploring the concept of a multi-trillion dollar secret space program, alleging that the Nazi Party in Germany gained technology from aliens before making a base on the moon. The film moves on to overtly citing QAnon and its encompassing lore, such as global elites experimenting on, raping, and torturing children, as well as a "cabal" suppressing people and controlling banks. The film concludes by portraying Donald Trump as a savior who is fighting this group with the help of someone going by the name Q, a so-called government insider who is leaking information, and with interviewee David Wilcock urging viewers to “take action now whether this information is true or not” before explicitly referring to the film as a “red pill.”

A YouTube channel using the_wake_up _q as a handle was removed from the platform in October 2020. At this time, a qthewakeup channel, which was created in January 2021 and uses the same artwork, still exists on Telegram.

‘Fake news’ isn’t just celebrity death hoaxes and satirical blog posts, it’s big business. With the advancement in web technologies, the news and their ads have gradually started to move into digital spaces. There are now tonnes of ad platforms...

On September 14, a lawyer named Vibhor Anand published some big “revelations” on his Twitter account. His account is now suspended, but not before Anand told his 87k followers that the Bollywood elite is involved in drug and child trafficking. Anand...