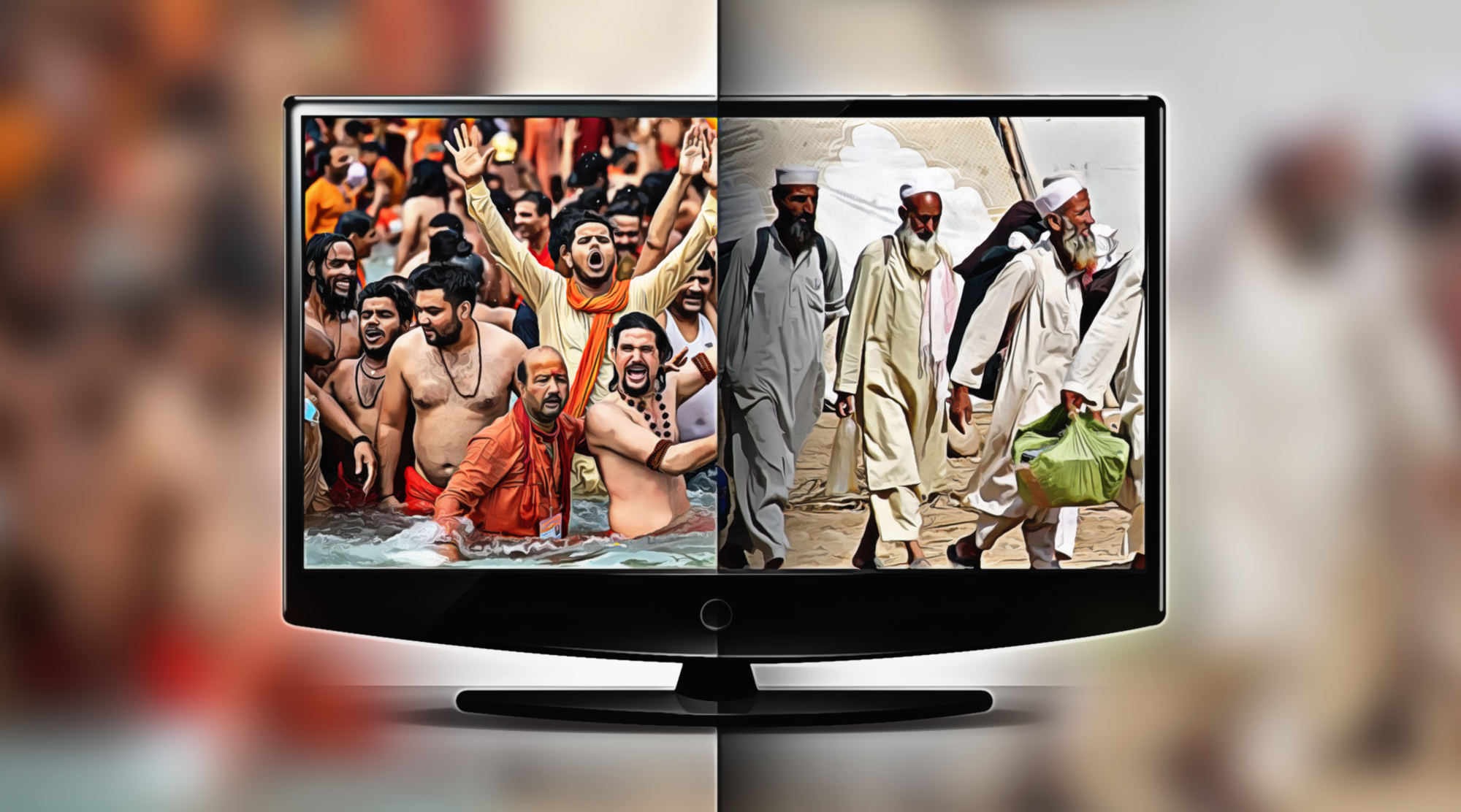 On April 30, 2021, India’s daily coronavirus figures hit a record high with 4,08,323 new cases and 3,464 deaths making the country the first in the world to register over 4 lakh infections in a single day.

After a few months of calm — when India saw coronavirus cases drop by nearly 90 percent from a high that lasted from September 2020 to February 2021 — the country has found itself grappling with an apocalyptic resurgence of the pandemic. In January 2021, Prime Minister Narendra Modi celebratorily declared at the World Economic Forum’s Davos Summit that India had successfully controlled COVID-19. But in March 2021, infections rose rapidly, raising alarm of a second wave. At that time, campaigning in the five poll bound states of West Bengal, Tamil Nadu, Assam, Kerala and Puducherry was at a peak with the first Shahi Snan (holy dip) of the Maha Kumbh, a major Hindu pilgrimage attended by millions of devotees, slated a few weeks away.

By mid-April, a looming disaster unravelled. One in every four cases reported globally was from India, and hospital beds and oxygen cylinders were starting to run out in parts of the country.

Now, crematoriums across the country continue to be choked with bodies – so much so that furnace frames in several crematoriums reportedly started melting because they have been burning non-stop. Meanwhile, social media is awash with pleas for ICU beds, oxygen cylinders and ventilators as the country’s healthcare infrastructure — which suffered from chronic underinvestment from even before the pandemic — is buckling.

While international media giants have criticized the government for not preparing for a second wave – despite experts’ warnings – mainstream media in India was extremely late in asking tough questions. The contrast becomes more pronounced when coverage of the Maha Kumbh festival this year is compared to how the Tablighi Jamaat, a Muslim congregation, was covered last year — when India was in the early days of the first phase of the pandemic.

In April 2020, exactly a year ago, an outbreak of the Coronavirus in the Tablighi Jamaat headquarters in Delhi was widely reported across TV news channels.

Tablighi Jamaat is an Islamic missionary movement mainly concerned with encouraging other Muslims to practise religion as it was practised during the lifetime of the Islamic Prophet Muhammad. The Jamaat sends out delegates to different countries for 40 days a year and sometimes for shorter durations. Following a Tablighi Jamaat congregation on February 28 in Malaysia — a country that eventually became a hotspot for COVID-19 — devotees came to Delhi for another conference.

Towards the end of February and beginning of March, hundreds of Muslims from South East Asia, South Asia, and Europe came to India’s capital eventually spreading to other parts of the country to recruit more people for the congregation. This went on for several days in the first two weeks of March. Over 9,000 missionaries may have attended the congregation, with the majority being from various Indian states, and 960 attendees from 40 foreign countries. On 18 April, 4,291 confirmed cases of COVID-19 linked to this event by the Union Health Ministry represented a third of all the confirmed cases of India. Around 40,000 people, including Tablighi Jamaat attendees and the people they came in contact with were quarantined across the country. At the time, the country had reported around 14,378 total coronavirus cases.

The Jamaatis were condemned as “super spreaders” by TV headlines, anchors, and reporters, and were accused of carrying out “corona jihad”. Channels like News Nation chased Tablighi members across the country, while ABP News labelled them as “human bombs”. Other channels brandished headlines such as “desh ko sankat me daalne vali Jamat” (Jamaatis are causing a problem for the country) where reports dissected a video from inside the mosque showing people lying down or sitting in groups. Several media reports falsely accused Jamaatis of misbehaving with medical staff at various quarantine facilities.

This paved the way for a barrage of fake news and distorted video clips that circulated on Facebook and WhatsApp — in an effort to substantiate the theory that Muslims were actively trying to spread the virus in India. Karnataka’s Bharatiya Janata Party MLA M.P. Renukacharya asserted that it wouldn’t be wrong to shoot Jamaat members who were avoiding treatment and other members of the party made similar comments. Calls for the socio-economic boycott of Muslims then ensued and some individuals were even attacked. Authorities went across different cities in India looking for people who attended the Jamaat, they also filed a criminal case against 567 foreign members of Tablighi Jamaat who attended the congregation.

In August 2020, Aurangabad bench of the Bombay High Court quashed FIRs against 29 nationals who were booked under various sections for allegedly violating their tourist visa condition by attending the Tablighi Jamaat congregation.

The court observed, “It appears that the State Government acted under political compulsion and police also did not dare to exercise powers given to them under provisions of procedural laws and substantive laws. A political government tries to find the scapegoat when there is pandemic or calamity and the circumstances show that there is probability that these foreigners were chosen to make them scapegoats.”

The Tablighi Jamaat congregation happens every year whereas the Kumbh Mela takes place every 12 years. The last Haridwar Kumbh Mela was held in 2010. The actual due date for the current Kumbh at Haridwar was 2022, not 2021 but due to the need to reconcile astrological configuration charts to calendrical years the government advanced the date after consulting with the Akhil Bharatiya Akhada Parishad, the apex body of over a dozen organizations of Hindu saints and sadhus.

Last month, despite the spiking positivity rate, preparations continued in full swing for the Kumbh Mela with the second of the five shahi snans slated on April 12 — the first having been held on March 11. Attended by millions and celebrated every 12 years, this year, the Mela had already been shortened to just one month from April 1 due to the pandemic. (Usually, the event is held from mid-January to April.)

"Kumbh Mela is not only a religious pilgrimage, but also perhaps the largest mass gathering at one place," India’s Ministry of Health and Family Welfare said in late January, in an advisory laying out COVID-19 measures for the festival. The ministry said it expected to see a million people on "a regular day" during the festival. But on "auspicious days," attendance may rise to five million, and there could be a "large surge of crowds congregating ... to take holy baths."

Over 48.51 lakh people gathered in Haridwar to celebrate the festival. Despite their best efforts, the police could not impose the standard operating procedures on the two major bathing days due to severe time constraints. In Uttarakhand, the daily cases were at 500 when the Kumbh Mela started. By 17 April, when the Juna Akhara finally called off the mela, the daily cases had grown to 2,757. According to officials, around 4,000 people out of 35 lakh people attending Kumbh Mela tested positive for COVID-19, but experts disagree with the figures. The New Indian Express reported an 1,800 percent spike in active cases in Uttarakhand between March 31 and April 24, a period coinciding with the Haridwar Mahakumbh.

News channels sent reporters to Haridwar for extensive coverage of the preparations. Ample stress was laid on how the Uttarakhand government was taking safety measures during airtime, even though it was obvious that the size of the crowd of attendees would make it impossible for authorities to ensure adherence to COVID-19 protocols. The Indian Express reported that between April 10 and 4 p.m. of April 13, over a thousand people had tested positive for COVID-19 in the Kumbh Mela area. Kumbh Mela Inspector General Sanjay Gunjyal reportedly said there was difficulty in ensuring adherence to protocols because of the size of the crowds. 22-23 lakh devotees had arrived in Haridwar, according to his estimates.

This is very different from the media’s stance on the Tablighi Jamaat congregation — which focused on “devotees” flouting COVID rules. At the Kumbh Mela, attendees were not labelled as “human bombs” and they were not called “anti-national.” Though the Print published an opinion piece saying Jamaatis had committed a crime against humanity, but the massive crowd of Hindus invited no scathing words. On the contrary, the same outlet published another opinion piece by eminent Indian-American anthropologist Tulasi Srinivas who wrote:

“As a scholar of Hinduism, I celebrate this peaceful mammoth congregation of humanity. Rooted in Hinduism’s ancient theological texts, the bathing ritual has survived wars, revolution and famine – but its biggest threat has been epidemic diseases. Authorities from the colonial British government of the 19th century to the Indian government today have had to contend with the challenge of managing the spread of contagion during this huge gathering of people.”

Uttarakhand Chief Minister Tirath Singh Rawat added, "the devotees attending Kumbh are not from outside but our own people. Moreover, when the Markaz was held there was not much awareness about the Coronavirus nor were there any guidelines. No one knew for how long the attendees of the Markaz had remained in the confines of the structure, he said. Now there is more awareness both about COVID-19 and the guidelines related to it.” The Twitter page for Uttarakhand Tourism shared aerial footage of the shahi snaan — or the holy dip — to promote the event. They also posted other videos showing crowds of people breaking covid restrictions. “Nobody will be stopped in the name of COVID-19 as we are sure the faith in God will overcome the fear of the virus,” Rawat said on March 20.

It is important to note that aerosol transmission is one of the key ways in which the virus spreads. The images from the Mela makes one wonder if the pandemic actually happened — there was no social distancing and few masks could be spotted in the sea of faces. Gunjyal even told news agency ANI that a “stampede-like situation” could occur if the police tried to ensure social distancing at the kumbh.

The most important element of differentiation between these two religious events remains that the government actively promoted the Kumbh Mela despite colossal scientific evidence that such a congregation would make the contagion spread like wildfire across the country. When the Jamaat congregation took place in the early days of March 2020, much less was known about the virus. The World Health Organization had only declared the COVID-19 outbreak as a pandemic on March 11, whereas the Kumbh Mela was organised when the possibility of new variants affecting a larger section of the population was already known to the world.

MyGovIndia, the government’s citizen engagement platform, posted multiple tweets urging citizens to participate in song and video competitions during the Kumbh celebrations with offerings of cash rewards of Rs. 1 lakh and above. On April 18, after a nationwide furore on social media, Prime Minister Narendra Modi tweeted that he had spoken to Swami Avdheshanand Giri Ji Maharaj, chief of the Hindu Dharma Acharya Sabha, requesting him to convince the other seers about making the rest of the Kumbh a symbolic affair. On May 3, it was reported that as many as 99 percent of Kumbh returnees in Madhya Pradesh had tested positive for COVID-19. Reports of undercounting and misreporting have also surfaced with many questioning the discrepancy of only 3,000 cases being reported from an event which was attended by over 35 lakh people.

Tradition vs. Activism: Why Have Hindu Festivals Become A Battleground?

Every year, an image of India is circulated on social media, accompanied by text claiming that it was taken by NASA during Diwali. In truth, the picture is photoshopped, it’s most likely the outcome of different overlaid photographs taken by the...