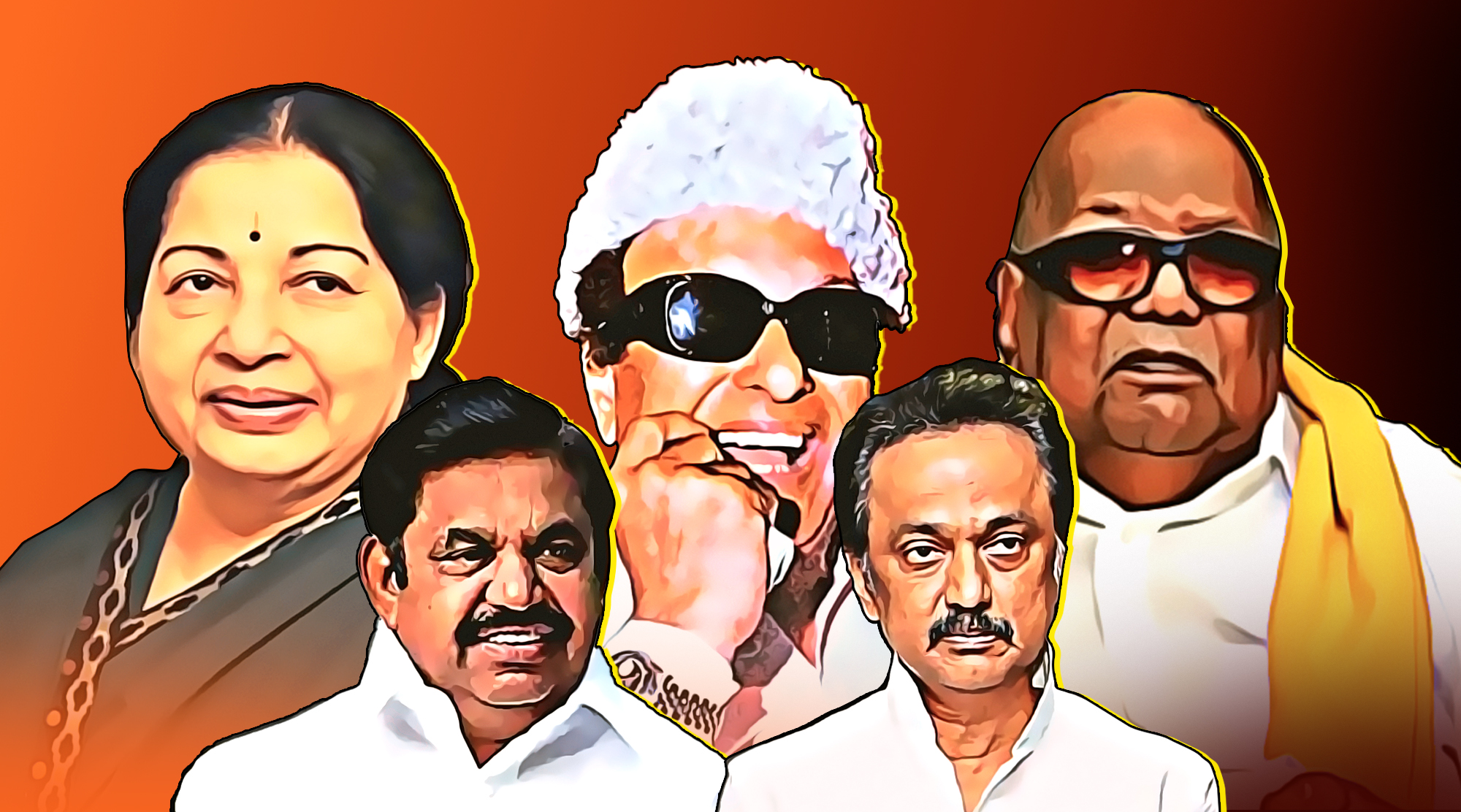 Politicians with formidable grassroots following, often linked with Tamil cinema, have led most major electoral exercises in the state of Tamil Nadu for decades since the times one of it’s most successful actors and politicians Maruthur Gopalan Ramachandran, popularly known by his initials MGR first became chief minister in 1977 and continued to occupy the chair until his death in 1987. MGR was followed by four elected chief ministers all linked to films - the most revered being his own All India Anna Dravida Munnetra Kazhagam’s (AIADMK) protege and successor; actor J Jayalalitha and party rival Dravida Munnetra Kazhagam’s (DMK) screenwriter M. Karunanidhi.

Although actors like Kamal Hassaan are attempting to make inroads into the political spectrum using MGR’s legacy, since the death of Jayalalitha in 2016 and Karunanidhi in 2018, the state’s leadership vacuum is paving way for a new narrative, that of Hindutva.

In addition to AIADMK’s pro-Hindu push in alliance with the Bharatiya Janata Party (BJP), right-wing accounts known widely for their digital savviness are calling for voting against DMK on account of the party being anti-Hindu or promoting conversion out of Christian missionaries.

Translation: Hindu community, don't fall into lies created by them. If per year they can make 60 lakh people change their religion, they can change the entire Tamil Nadu in 3 years.

Just like the opposition, the AIADMK is a party affiliated with Dravidian politics, rooted in rationalism, non-Brahmanism and being anti-centre. Therefore, its alliance with national ruling BJP has raised eyebrows and altered the course of the state’s campaigning ahead of elections on April 6. “The DMK is anti-Tamil is because DMK represents a very bad, virulent ideology which is anti-Hindu. Every Tamil is a proud Hindu,” BJP MP Tejaswi Surya said at a Bharatiya Janata Yuva Morcha convention in Salem district last month. “Every inch of Tamil Nadu is sacred, but DMK is anti-Hindu, so we must defeat it.”

Being a virtual non-entity in Tamil Nadu, the BJP and its sympathisers are painting Dravidian parties as being anti-Hindu when the foundation of its own ally is based in that school of politics.

While former chief minister late Jayalalitha steered clear of the BJP between 2014 when the party came to power in the center till her demise in 2016, AIADMK softened towards the central government. The two parties, along with others, went to the 2019 Lok Sabha election together and met with disastrous results getting only one seat.

AIADMK’s reluctant alliance is against the grain of its core politics which claims to owe its success in welfarism owing to the Dravidian movement. As recently as 2020, Tamil Nadu topped the Good Governance Index among 18 big states in the country, ranking among the top five six parameters including public infrastructure, judicial and public security and public health. The state has consistently performed well in the recent decades and taking a jibe at the center Deputy Chief Minister O Paneerselvem dedicated such growth to the Dravidian movement stating, “all these achievements have been made possible by the social equity agenda provided by the movement, without much patronage from the successive Central governments, while such patronage has been extended to many other States,” in his 2018 budget speech.

In fact, another reason the state fared well was political consistency, since neither the DMK or the AIADMK could wipe out the other on ideological grounds, according to Tony Blair Institute for Global Change report. This consistency translated to focus on investment, welfare schemes, and land distribution which opposing administrations maintained over time.

But the course of politics has taken a drastic turn since the demise of Tamil Nadu’s political stalwarts. Not only is this being pitted as an election between DMK and its ally the Indian National Congress against pro-Hindu AIADMK along with the BJP, it is also the first time there has been a push for digital campaigning owing to the lack of grassroots popularity in the current leadership.

So convenient are the alliances that Tamil Nadu Chief Minister Edappadi K Palaniswami recently, referring to the BJP, told a Muslim congregation in Tiruppur not to  “fear our alliance” since alliances are different from ideology and are merely “created for politics.”

While BJP might merely be attempting to make inroads in Tamil Nadu keeping the 2024 general elections in mind, despite having no substantial presence in the south, pro-BJP accounts are successfully widely sharing misinformation and disinformation about the opposition and the status of Hindus in the state. According to an op-ed in The Wire, the “BJP’s electoral strategy for Tamil Nadu in 2021 is the de-dravidisation of state politics.” Others have accused it of trying to create communal and political rifts ever since Jayalalitha’s demise opened doors for them to increase ground presence in the state.

But experts argue Tamil Nadu’s strong Dravidian leanings will ensure the politics of the state doesn’t stray far. Ideas of Hindutva don’t fare too well with the people of the state, and recent efforts by Prime Minister Narendra Modi and Home Minister Amit Shah expressing regret over not knowing Tamil, haven’t held much water. What the AIADMK-led NDA does have however, is consistent growth in its consecutive terms combined with Palaniswami’s successful COVID-19 crisis management, in which the state was one of the first to act even announcing a lockdown a day before Modi’s televised address.

Pollsters however, see lack of leadership and anti-incumbency as reasons DMK will gain victory on counting day, with the Times Now-C-Voter opinion poll projecting the party wresting Tamil Nadu from the AIADMK and returning to power with 158 seats in the 234 member assembly.

The Death of an Icon and a False Flag Operation

Social media manipulation is on the rise in India, particularly that of a political nature. Cataclysmic news events make the perfect foil for storms of bots and hashtag manipulation to exert pressure on political opponents, and the passing of one of...