Double Check: Why Did People Believe Woolworths Was Returning to UK High Streets? 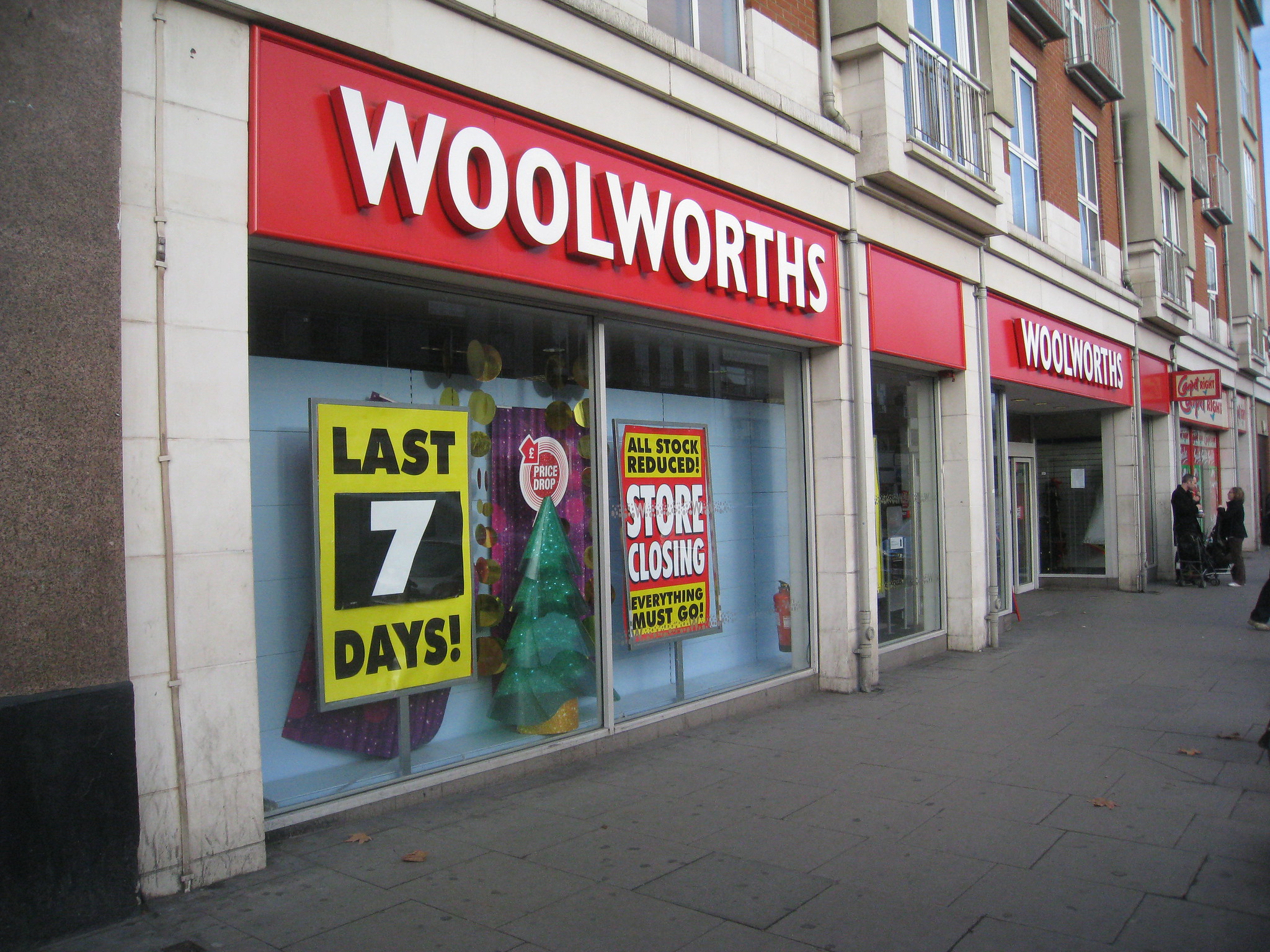 Article by Edie Miller and research by Joe Ondrak

A Twitter account announcing the relaunch of the UK high street chain Woolworths went viral yesterday, convincing lots of excited shoppers (and even some media outlets) before being quickly disproved as a hoax.

Logically investigated the spread of the hoax, finding that the nostalgic pull from the account itself drowned out the voices of those identifying it as fake, such as the BBC disinformation and social media reporter Marianna Spring. 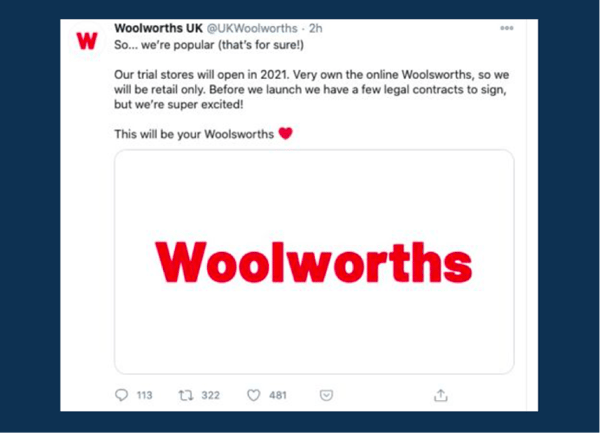 The @UKWoolworths account exploded into existence on October 26 and quickly started amassing followers thanks to tweets like the one above. Along with their bio and header image, the account embraced a friendly tone of voice, seemingly aware of how ubiquitous Woolworths were on UK high streets and how loved the brand was. 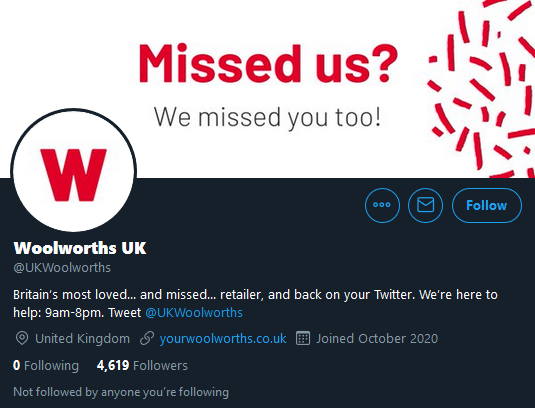 @UKWoolworths takes advantage of the nostalgia many feel for the brand

The first sign that something was amiss (beyond referring to themselves as “Woolsworths”) was that the account didn’t have the blue verification tick that most brands carry on the website. In addition, the website linked in the account’s bio was only registered on October 27—the day after the account was set up.

Looking at WHOIS records, we can see that there isn’t a website associated with the domain and the registrant’s details are still being checked. This shows that either the domain was registered ad hoc for the account, or else someone took it upon themselves to nab the domain off the back of the account’s virality.

The tweet that really caused the account to go from whispered rumors to a full-blown viral news story was the one from October 27. This tweet, depicted below, claimed that Woolworths was coming back to the UK high street (even though the UK high street is currently suffering), that the team wanted the public’s input on how to make these stores “right” and that they were “here to save 2020.” 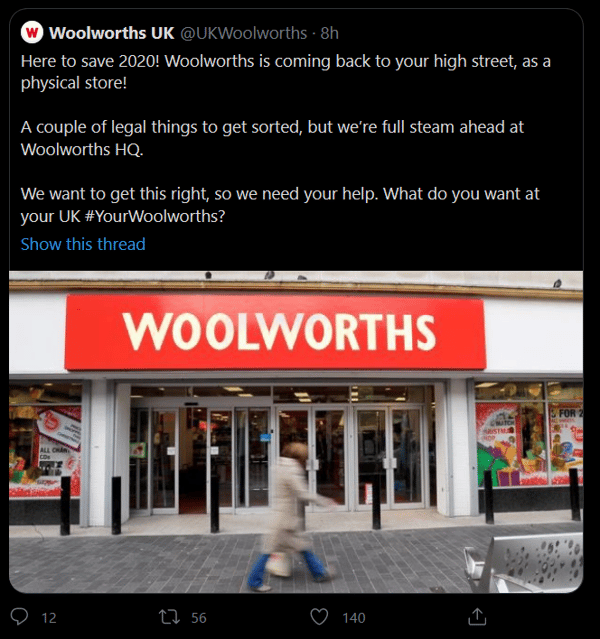 @UKWoolworths tweet a picture of an old Woolworths storefront

As we can see in the map below the hoax account dominated Twitter conversations from UK lunchtime on October 27. Most of this was down to retweets of the tweet above, and the conversation on Twitter involved strong and influential accounts (indicated by the bolder connecting lines).

What really caused the rumor to trend, however, was the number of news outlets falling over themselves to report on the return of Woolworths. The image below shows Facebook posts from news pages about the rumor. Though The Sun and Fabulous stressed that the tweets are unverified, other accounts were less forthcoming—most notably Metro, whose post still accrued 16,000 shares.

The green section shows when users directly interacted with the @UKWoolworths Twitter account. Other colours show different conversations, but of particular importance is the blue cluster in the left edge of the circle. This indicates when Marianna Spring and other disinformation investigators such as Alistair Coleman were discussing the validity of the account (or lack thereof). 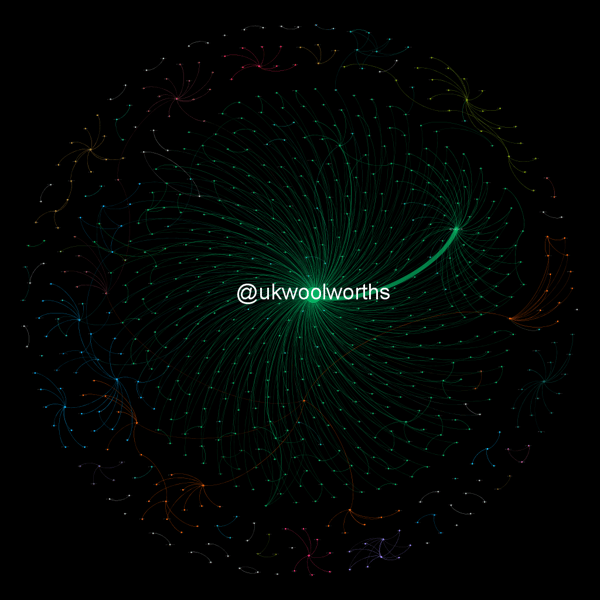 A map of Twitter conversations with the keywords “Woolworths” or “yourwoolworths” 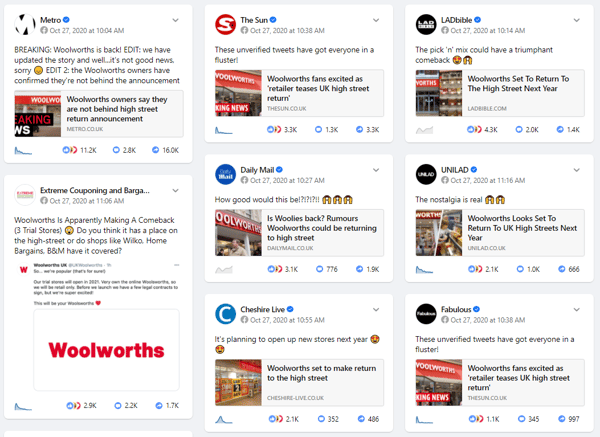 As well as different news platforms reporting on rapid online trends in a less-than-transparent way, some blame for this viral rumour lies at the feet of social media platforms themselves. The trend against chronological news feeds has ensured that stories that have been disproved can reemerge far later in the day, unchallenged, for a fresh set of eyes and clicks.

So that’s the anatomy of a fake, but what about the real thing? We asked social media director Christina McDermott how to tell a real brand relaunch from someone trying to take you (and Metro) for a ride.

Hi Christina, thanks for helping us investigate the Woolies debacle! What does launching, or in this case relaunching, a brand usually look like?

It usually takes weeks and there's usually a lot of different people and agencies involved. You have to think about every aspect and how you're going to get this brand and its message out there.

You could tease it in newspapers or with TV ads. You'd make sure that you had social media accounts registered on all the main channels (e.g. Facebook, Instagram, YouTube.) You usually wouldn't just have one Twitter account doing the bulk of the work.

There tends to be a whole media plan. The social team has to wait for the PR team who in turn has to wait for the digital team. Press releases are sent to trade publications and influencers are usually involved in some way, meaning that people would generally know before a random Twitter account popped up and started saying that a much loved brand was reappearing.

We'd also make sure that the people running the social media accounts knew how to spell our brand name and know that it was “Woolworths” not “Woolsworth”. Pretty important, that bit.

Is it normal, or even heard of, for a brand to launch (or relaunch) with one social media profile and without a website ready?

Lol, no. Your website doesn't have to be incredibly sophisticated, but this is the first time I've seen a scam of this type go this far without anything backing it up. When I did community management for a major supermarket brand a few years ago, we'd get Twitter accounts cropping up pretending to be us all the time. They'd even respond to consumers on our behalf (which could sometimes be useful, but on other occasions could be a pain in the backside as they told people to stop moaning about their mouldy potatoes.)

Twitter's usually pretty good at taking these kinds of accounts down once they've been proven to be hoaxes, particularly when brand stakeholders come out and say that they’re not legit. I was actually kind of surprised at how long the Twitter account was live considering all the press around it.

Would an announcement like this normally come with some kind of press release?

Yes. This would go out to newspapers, trade press, etc. This doesn’t always guarantee coverage, but it gives the media a lot more to go on than a few misspelled tweets from a Twitter account.

Are there any signs that are glaring to a social media manager that a launch is a hoax?

The logo and banner look like they were thrown together in Canva. That's not necessarily a bad thing, but if you're relaunching a well known and much loved UK brand, you'd probably want to hire a decent graphic designer for your launch.

I'd also be absolutely hung, drawn and quartered by my clients if I got their name wrong in a tweet, or misspelled the name of their key product (they've posted a tweet where they've called it “Pick and Mix” rather than “Pic and Mix” despite attaching a branded image of the Pic and Mix counter.)

The fact that the website in their bio didn't work (and was later found not to exist) was also a bit of a giveaway. It just all looks a bit sloppy.

They've also been inconsistent in how they respond to tweets from people. Some are signed off with '^' and the community manager's initials, which is pretty standard, but others look like they just can't be arsed. If you want to make this kind of thing work, you need to be consistent in your pretence, otherwise people can spot you from a mile off.

Parodies and hoaxes can get you far on social media, but you also need some strategy behind it if it's going to work - throwing content out and seeing what sticks is risky.

Honestly, one of the biggest red flags to me was them saying that they weren't going to be relaunching online, just as physical retail stores on the high street. Have you seen the state of the high street recently?!

Lastly, why do you think people believed it?

2020 has been such a rotten year for so many of us, that there was something quite comforting about the return of a store where we could buy our own body weight in Dolly Mixtures.

If you're a legacy brand, you can get a lot of engagement for free just by posting an old ad or packaging from a discontinued item—it's something Sainsbury's have done really well with their packaging archive for example. In this case, it seems there was a viral tweet going around yesterday showing an old Woolworths from the 1990s, so somebody obviously saw an opportunity and leapt on it. I mean, good for them and at least we all got a day's worth of distraction from the awful awful news cycle. I'd say that I'm surprised that so many major news outlets were taken for a ride by it, but that would be a lie.

Christina McDermott is the founder and Managing Director of digital content agency Cattington, she has worked in social media since 2010, with brands like Unilever, Adobe, Reckitt Benckiser and Pernod Ricard in her portfolio. She has a fantastic newsletter about everything social media called Social Lives, and can be found on Twitter here.

Former First Lady Michelle Obama, in her keynote speech at the remote Democratic National Convention while talking about the state of the nation under the current administration said that Americans “…watch in horror as children are torn from...