Double Check: Why Are People Linking FTX to Ukraine and the U.S. Midterms? 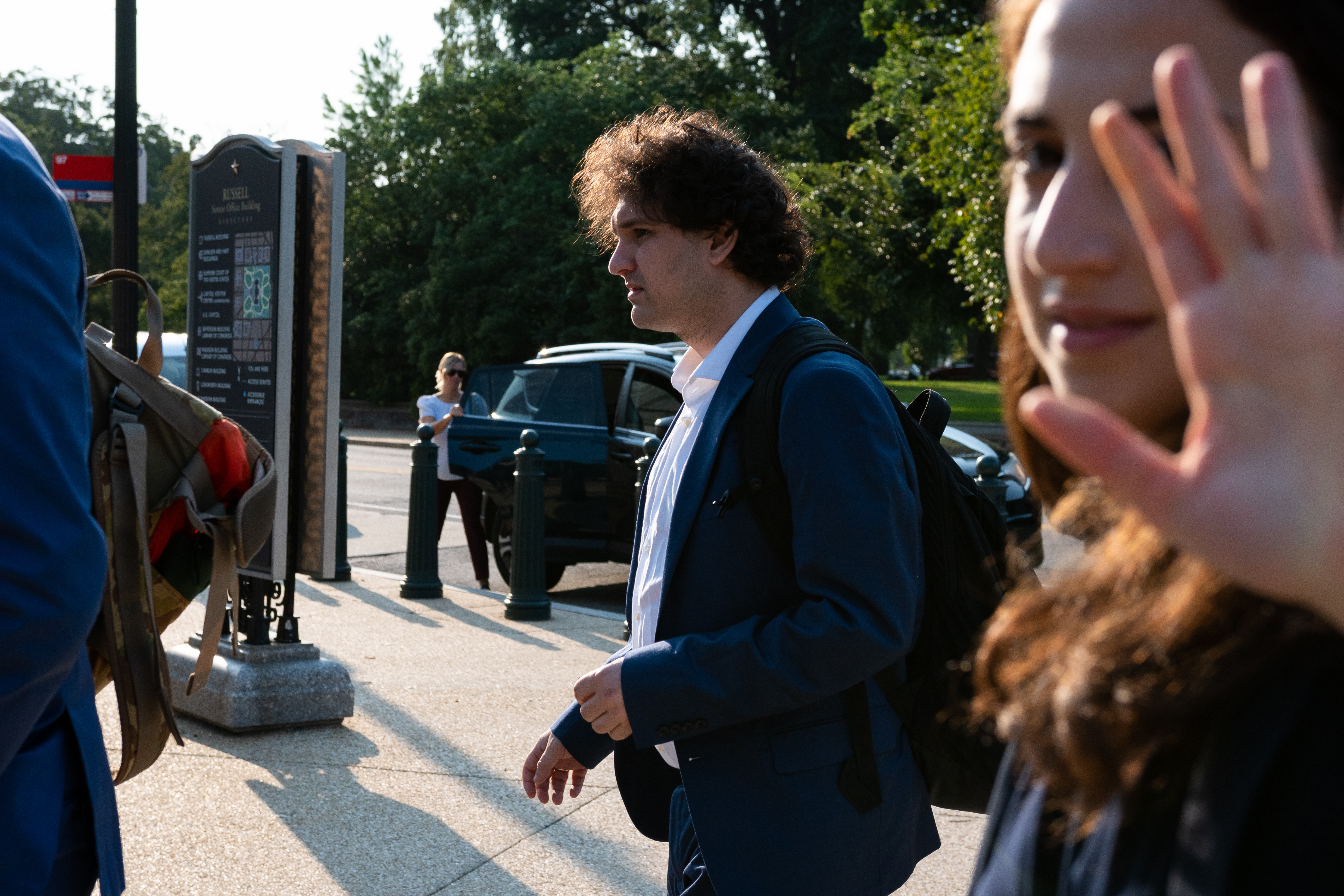 The cryptocurrency exchange FTX declared bankruptcy on November 11. While there are many unanswered questions concerning the troubled business and the conduct of its leadership, the exchange's collapse has given rise to numerous conspiracy theories concerning the U.S. midterm elections in November 2022.

FTX, the Democrats, and the Makings of a Conspiracy Theory

Claims surrounding FTX and the Democratic Party appear to be largely inspired by the fact that the exchange's founder and former CEO, Sam Bankman-Fried, has been a major backer of the party. Initially pledging to spend $1 Billion, Bankman-Fried was the Democrats'  second biggest donor this cycle, ultimately contributing around $36 million in the leadup to the midterms.

While the amounts of money pledged and ultimately donated by Bankman Fried are unusually large for a single donor, it is worth noting that he was not the only senior figure at FTX donating to political causes. Ryan Salame, another former executive, donated close to $23 million to Republican-affiliated candidates and causes prior to the election.

While multiple unfounded narratives have arisen concerning the collapse of FTX, the most prevalent is that FTX was designed to launder money for the Democratic Party in the run-up to the 2022 U.S. midterm elections. According to this version of events, the timing of its bankruptcy filing is not coincidental and instead results from the business having fulfilled its money laundering function.

Why Does Ukraine Feature in These Narratives?

A post on Telegram concisely summarizes this money laundering narrative. Viewed over 100,000 times on the platform and subsequently shared to more mainstream social media sites, including Twitter, it reads, "to sum up the FTX money laundering scam: Democrats and globalists were sending billions of our dollars to Ukrainian Nazis and, in turn, were sending all of it back to Democrats to help them win the midterms and anons were right about Zelenskyy this entire time."

A screenshot of a Telegram post summarizing the money laundering narrative.

Similarly, data from Crowdtangle shows a sharp increase in engagement on Facebook posts concerning "FTX" and "Ukraine" in the days following FTX's bankruptcy filing, with interactions peaking on November 15. 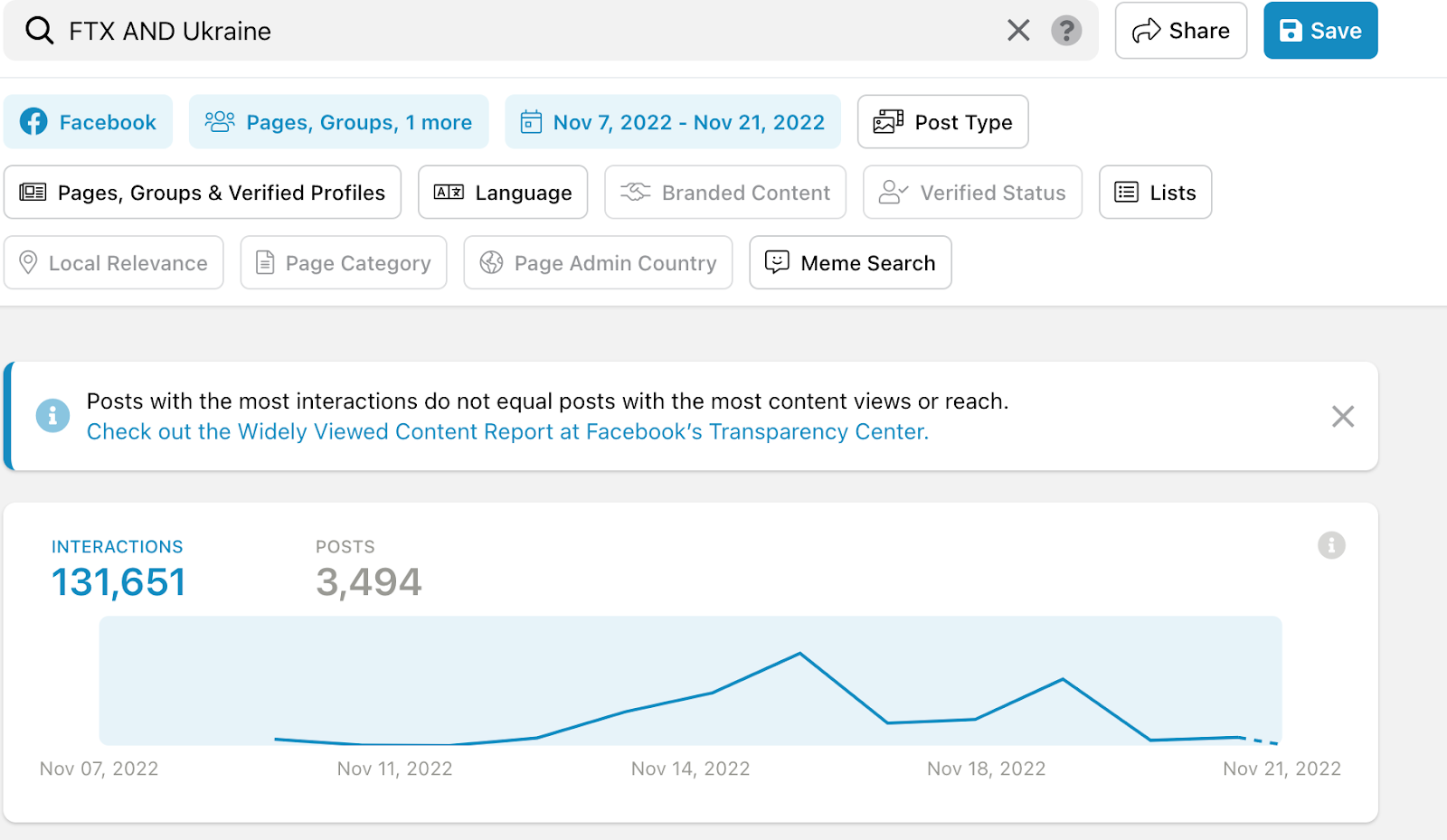 A screenshot from social media analysis tool Crowdtangle, showing increased engagement for the search terms "FTX" and "Ukraine" in combination.

The connection to Ukraine is a key feature in most versions of this conspiracy theory. While accounts of how money was laundered through the country are hazy, they allude to an initiative set up by FTX at the beginning of Russia's invasion in February 2022 to allow customers to donate to the Ukrainian cause using cryptocurrencies. Dubbed "Aid for Ukraine" and operated in partnership with the Ukrainian government, Ukrainian firm Kuna, and crypto service platform Everstake, this scheme has raised over $60 million to date.

While no evidence has surfaced linking Aid to Ukraine to money laundering, the Gateway Pundit, a fringe right-wing site with a long track record of publishing unsubstantiated claims, went as far as to suggest that the country's war effort was contingent on this scheme. Days after FTX's bankruptcy filing, it ran the headline "Coincidence? Zelenskyy Calls for Peace Just Days After FTX Is Caught Funneling Millions of Ukrainian Aide Dollars to US Democrats."

The Response From Ukraine

No evidence has surfaced to support allegations that FTX was laundering money through Ukraine for political ends. Alex Bornyakov, the country's deputy minister of digital transformation, addressed these claims on Twitter, writing, "A fundraising crypto foundation @_AidForUkraine used @FTX_Official to convert crypto donations into fiat [traditional currency] in March. Ukraine's gov never invested any funds into FTX. The whole narrative that Ukraine allegedly invested in FTX, who donated money to Democrats, is nonsense, frankly."

Michael Chobanian, the founder of Kuna, also took to the social media platform to refute allegations of money laundering, explaining that the initiative "used FTX in the first month of the war as an off-ramp to fiat in cases when we need fiat." He went on to explain that "No crypto was stored on FTX" and pointed out that, as cryptocurrency blockchains are public, this version of events can be verified by members of the public.

Before engaging in conspiratorial narratives, it is worth noting that the events leading to FTX's bankruptcy are fairly well documented. According to reporting by the New York Times and other outlets, the collapse was precipitated by a leaked document that showed another of Bankman-Fried's ventures – Alameda Research – was largely propped up by holdings of FTT, a cryptocurrency of FTX's creation. As this business was closely tied to FTX, the news prompted concern among both investors and commentators. The core issue with this arrangement was that, by holding such large reserves of these particular tokens, Alameda had placed itself at risk of insolvency in the event that FTT's value should fall. To make matters more concerning, Alameda's reserves of FTT exceeded the amount existing on the open market, meaning any attempt to liquidate these holdings would likely tank their value.

Days after this news, the largest cryptocurrency exchange, Binance, announced that it would sell its reserves of FTT. Its CEO, Changpeng Zhao, compared FTT to Luna, a cryptocurrency infamous for tanking earlier this year. This contributed to a notable decrease in the value of FTT, and led spooked investors to begin withdrawing funds from FTX in large numbers. An internal message sent to staff on the morning of November 8 reveals the scale of this exodus: "In the last 72 hours, we've had roughly $6b of net withdrawals from FTX," Bankman-Fried wrote, announcing a moratorium on customer withdrawals.

While this was happening, FTX actively sought outside investment to address its liquidity issues and stabilize its struggling exchange. These efforts appeared to bear fruit on November 8, when Binance announced its intent to buy FTX for an undisclosed amount. This eleventh-hour intervention did not materialize, however, as Binance pulled out a mere day later, citing financial mismanagement and information obtained during due diligence investigations. On November 10, Sam Bankman-Fried resigned as CEO of FTX. Subsequent reporting from outlets, including the Financial Times and Bloomberg, suggests that the exchange was facing a shortfall of around $8 billion.

While there are still unresolved questions concerning FTX's collapse, there has been a multitude of allegations of wrongdoing and mismanagement. Among the most concerning of these is the claim that FTX was funneling funds to Alameda Research to facilitate its trading operations. A Vox reporter asked Bankman-Fried, "so…FTX technically wasn't gambling with their money, FTX had just loaned their money to Alameda, who had gambled with their money, and lost it? and you didn't realize it was a big deal because you didn't realize how much money it was?" He responded, "and also thought Alameda had enough collateral to reasonably [sic] cover it," seemingly confirming this version of events.

It may be some time before the precise details of FTX's decline become fully clear. In a recent court filing, the new CEO, John Ray, decried what he characterized as an "unprecedented and complete failure of corporate controls" during Bankman-Fried's tenure. Ray, who was brought in to salvage what was left of the exchange and its affiliated businesses, went on to describe "a complete absence of trustworthy financial information" due to "the conduct of previous management."

No Evidence of Midterm Shenanigans

While the full picture concerning FTX's collapse is unclear, enough is currently known to cast doubt on conspiratorial narratives involving the Democratic Party and Ukraine. As pointed out by the Ukrainian partners involved in Aid for Ukraine, no evidence – either from blockchain analysis or otherwise – has surfaced supporting allegations that donations were improperly moved from this fund to recipients in the United States. It is also unclear why government officials and citizens of a country at war would choose to collude in such a scheme.

It must also be noted that while Sam Bankman-Fried was a prominent donor to groups aligned with the Democratic Party, the political activity of FTX executives was far from one-sided. Ryan Salame's donations to Republican causes contradict theories that frame the business as a partisan money laundering operation.

Given that the closest thing to evidence proponents of this theory have is the coincidental timing of FTX's unraveling, it is difficult to see how this theory gained traction. The scale of alleged mismanagement that has come to light is in itself sufficient to explain the company's collapse, and no iteration of this narrative has presented a reasonable account of why politicians, officials, and executives would sign up to such a risky, public, and complex scheme to launder money.