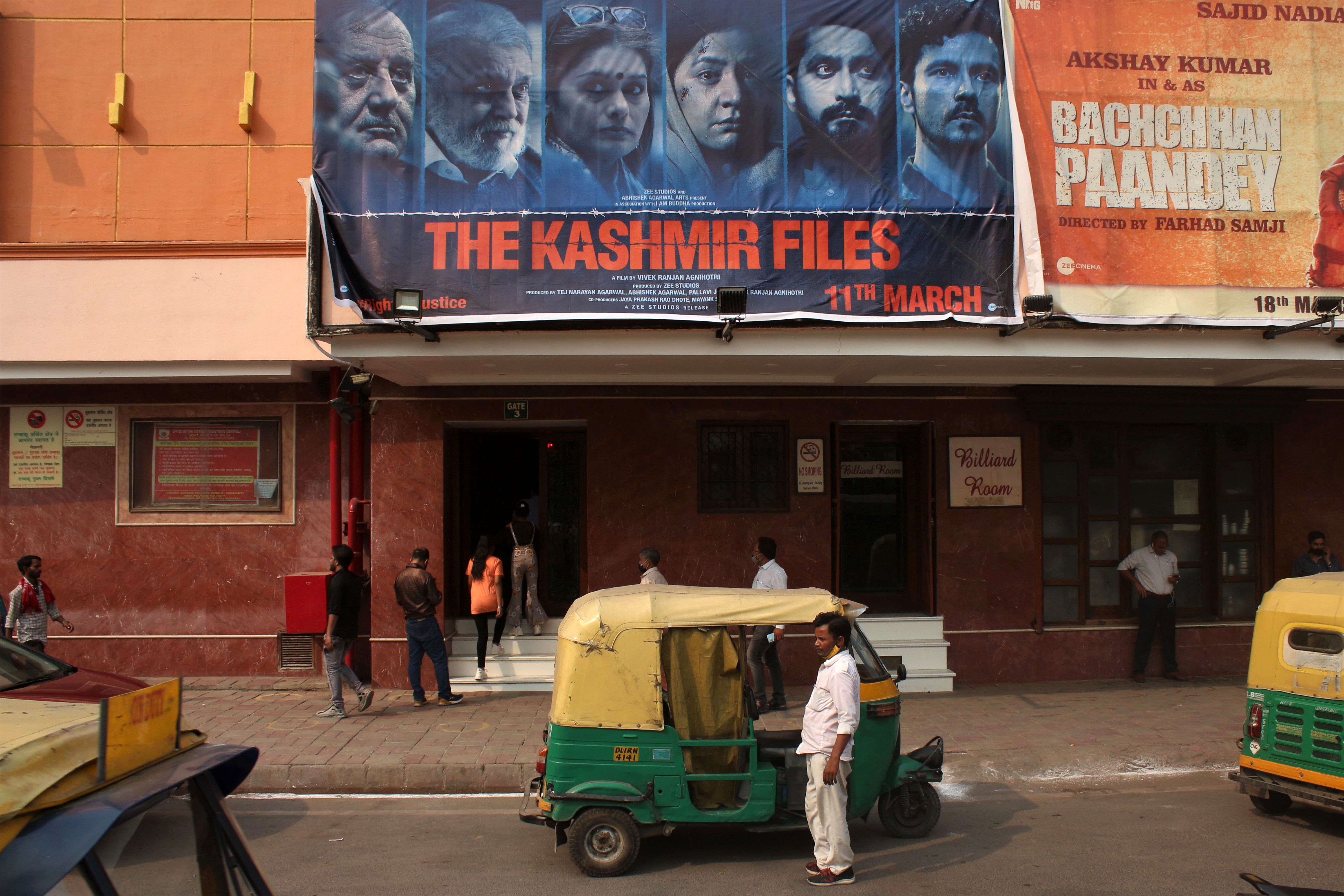 Delhi Chief Minister Arvind Kejriwal’s now-viral speech on the Legislative Assembly floor – which mocked the Bharatiya Janata Party’s (BJP) aggressive promotion of a feature film based on the mass exodus of Kashmiri Hindus in the 1990s – has sparked a row over which party helped to rehabilitate the community that was forced to migrate.

The Kashmir Files claims to document the mass migration of over 100,000 Hindus from the Kashmir Valley following the beginnings of insurgency against Indian rule in 1989. The film has amassed significant success at the box office. However, it contains historical inaccuracies, which have been documented here, here, and here. Using edited clips, members of the BJP claim Kejriwal has disregarded the plight of Kashmiri Hindus by calling the film a lie.

In response to the backlash, Kejriwal clarified his speech was solely directed at the BJP leaders endorsing the film instead of rehabilitating Kashmiri Pandits. “We did all we could for all the Kashmiri Pandits who came to Delhi. In 1993, they took jobs as contractual teachers. In between, the BJP came to power, Congress came to power, and none of them made these temporary teachers permanent. We made these teachers permanent,” Kejriwal said.

The BJP countered his statement, claiming the Aam Aadmi Party (AAP)-led Delhi government was against the regularization (permanent employment) of Kashmiri teachers in court. “It is not surprising that [Kejriwal] is trying to take credit for it,” a BJP leader told Indian Express.

Many Kashmiri Hindus had migrated to Delhi as tensions rose in the valley and taken contractual employment as teachers, with the aim to return once the situation deescalated. Eventually, the teachers remained employed for decades without permanent jobs and resultant benefits.

Amid the back and forth between the AAP and BJP, two contradictory press releases signed by individuals claiming to be coordinators of the same migrant teachers’ association were released. The first was from Dilip Bhan, who claimed that the AAP challenged court orders favoring Kashmiri migrant teachers. The second, signed by TK Bhat, claimed Bhan was not a member of the association, adding that the AAP helped bring about the policy that regularized migrant teacher posts.

As questions arose concerning the authenticity of both press notes, Bhat told the Times of India, "we can't say who Bhan is. I am a member of the association. We were regularized in 2019 with the support of the Delhi government. Delhi High Court and the Supreme Court." When Logically reached out to Bhat and asked if he could provide evidence of his designation, Bhat said, “I don't have any proof because we formed the association when it was needed, and later it became obsolete after the services were regularized for the migrant teachers.”

Delhi’s present general secretary of the Government School Teachers’ Association (GSTA), Ajay Veer Yadav, told Logically, "The migrant school teachers’ association is only a segment of the GSTA, and Bhat is a coordinator. Bhan is a retired member of the association.”

In AAP’s defense, leader Atishi said, “The Delhi Lieutenant Governor (LG)  appointed by the BJP noted this was a service matter, and the Delhi government had no jurisdiction since all decisions on the subject had to be taken by the LG. The BJP’s LG never stood by Kashmiri migrant teachers. He openly opposed their regularization.” The Delhi government shares its power with a central government-appointed LG, who controls matters related to public order, police, and land in the national capital, among many other departments.

Advocate Rakesh Tiku, representing the Government School Teachers’ Association (Migrants Regd), told India Today, “The LG’s service department had appealed a 2015 High Court order regularizing jobs.” Tiku added, “It was the LG office in 2018 that again decided to appeal against the order based on legal opinion,” admitting that the AAP, while initially deciding to implement the order, had on one occasion changed its mind, and was eventually in favor of granting permanent jobs.

A 2018 copy of court proceedings highlighted how both the LG’s office and the Government of Delhi could have contributed to stalling the regularization. The proceedings show that while the LG approved of the proposal in principle, it needed to examine the “constitutional and legal damnations of the proposed policy.” Meanwhile, the advocate for the Delhi Government argued that the teachers’ acceptance of a contractual position did not entitle them to claims of permanent employment.

At the center of this argument over who takes credit lies the long-standing dispute between the sharing of power in the capital between the AAP-led Delhi government and BJP-appointed LG.

Last year, following an amendment passed in the ‘The Government of National Capital Territory of Delhi Bill,’ the LG amassed even more control, with the bill stating “the expression ‘Government’ shall mean the Lieutenant Governor.” In addition, the elected government would need to seek approval from the LG before taking any executive actions.

Although both the BJP and AAP have changed their stance on giving Kashmiri migrants permanent employment on several occasions, narratives being spread by both parties have left significant confusion over the timeline of events. “You can’t say Delhi Government delayed matters further, neither can you blame the LG because no one wishes to take responsibility over changing things that are institutionalized,” according to Tiku.

Late on June 23, hours before the Indian Prime Minister was scheduled to meet politicians from Jammu and Kashmir, a local food delivery app sent out a message to its users.