Double Check: What Is the Great Replacement Theory? 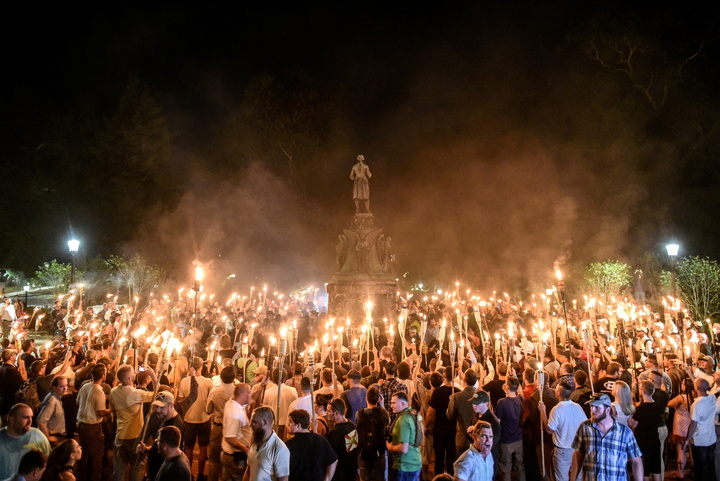 The Great Replacement is a far-right conspiracy theory that alleges white Europeans are being "replaced" by Muslims from Africa and the Middle East. Believers in this racist and xenophobic conspiracy theory often say the “replacement” will lead to the end, or even to a genocide, of white people. They often point to immigration as fuelling the so-called replacement, but they sometimes point to the existence of interracial relationships, high birth rates among non-European immigrants, and low birth rates among white Europeans.

As a conspiracy theory, the Great Replacement is not only racist and xenophobic but also baseless; demographers are not predicting the end of white people. As Hope Not Hate has explained, "An increase or decline in the birth rate of one group or another does not necessitate its continued increase or decline in the long term, nor does an influx of non-European migrants into Europe necessitate that this will continue at that rate or grow further still in the future."

The Great Replacement conspiracy theory has its roots in France. Renaud Camus, a once-lauded gay writer and laureate of the Académie Française, wrote about le grand remplacement in a 2011 book of the same name, popularizing the phrase. In this book, Camus (who has nothing to do with the Albert who wrote L’Étranger) claimed he was simply saying what everyone else was too afraid to say, insisting that he wasn't spouting a conspiracy theory but instead relating a truth observable in Western countries.

Of course, the concepts behind this conspiracy theory predate the phrase used by Camus. In 1900, Maurice Barrès, the antisemitic so-called father of French nationalism, wrote about a grand remplacement in which Jewish people replaced French people in a novel. The Great Replacement is also very similar to the White Genocide conspiracy theory, which has American instead of French roots and can be traced back to the post–Civil War Reconstruction era. As the historian Kathleen Belew said on NPR, the Great Replacement is simply the "latest term for an old set of ideas."

Indeed, in the past decade or so, the language of "replacement" has become widespread in far-right-wing circles and has also been associated with mass shootings around the world. At the infamous 2017 Unite the Right rally in Charlottesville, Virginia, cries of "you will not replace us" and "Jews will not replace us" could be heard. After this rally, Camus said he didn't support Nazis but could "very well understand why people in America would chant, 'We won't be replaced,' and I approve of that."

Tucker Carlson, the Fox television host, has also used the language of the Great Replacement conspiracy theory. In April last year, he told his viewers: "I know that the left and all the little gatekeepers on Twitter become literally hysterical if you use the term replacement – if you suggest the Democratic Party is trying to replace the current electorate, the voters now casting ballots, with new people, more obedient voters from the third world. But they become hysterical because that's what's happening."

Carlson's comment is strikingly similar to a comment by Marine Le Pen — the French far-right lawyer who is standing against President Emmanuel Macron on April 24 — all the way back in 2010.

In 2010, Le Pen was out and about when a driver of North African appearance shouted "long live Mélenchon" in her direction — a reference to Jean-Luc Mélanchon, France's leading far-left candidate. To this, Le Pen asked the driver if he had won his car in the lottery, adding that every time someone says "long live Mélenchon," they are from North Africa.

Le Pen's perhaps most overt reference to the Great Replacement was in 2011, when she asked the following: "How can we be OK with seeing our adversaries ruining the country economically and morally, with the organized replacement of our population?"

Three years later, in 2014, she changed her mind about the "organized" aspect of the remplacement at hand and questioned the accuracy of the term. "The idea of a 'great replacement' suggests there's a set plan," she said. "I don't subscribe to this conspiracy thinking."

In 2018, she apparently changed her mind again, saying, “Never in the history of mankind have we seen a society organizing an irreversible submersion of uncontrolled magnitude which, in the long term, will cause the disappearance, by dilution or substitution, of its culture and way of life.” 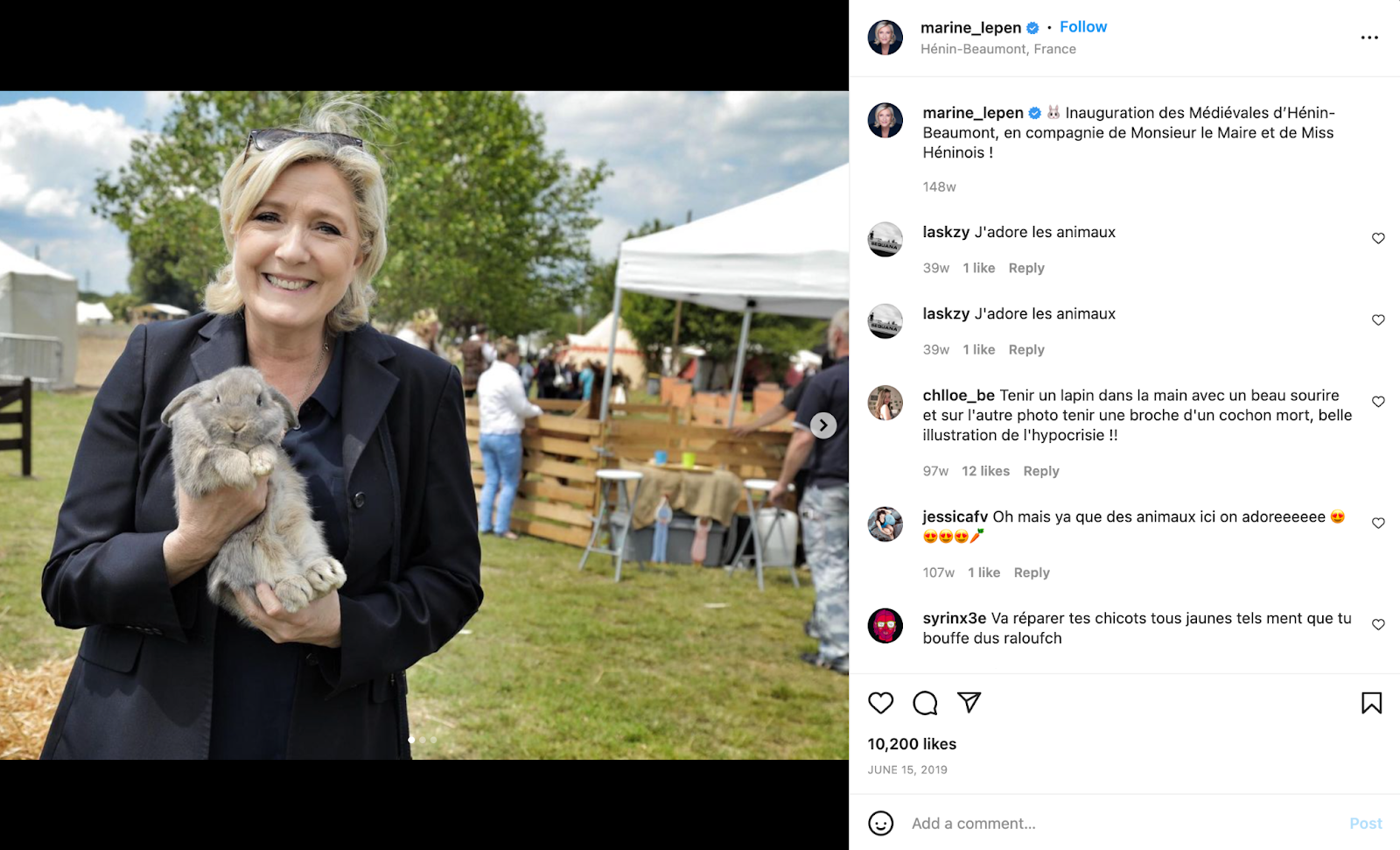 Numerous outlets have reported that Le Pen has "softened" her branding since President Emmanuel Macron triumphed in 2017. This has apparently come in the form of the presidential candidate focusing on areas such as the cost of living and lowering the retirement age. The idea that she has softened her branding has also doubtless been helped by innumerable media outlets banging on about her softening her brand.

Le Pen's anti-immigration policies have remained the same. Among other things, she wants to ban Muslim women from wearing headscarves and give French nationals priority when it comes to social care and housing. On her 2022 campaign website, Le Pen speaks about out-of-control immigration. She repeats the word "souveraineté" and states her desire to eradicate "islamisme." Indeed, once you get passed the social media pictures of Le Pen hanging out with rabbits and Bengal cats, you soon realize this is the same woman who compared Muslims praying in the street to the Nazi occupation of France.

As Hope Not Hate has also written, Le Pen “also encouraged people to read Le Camp des Saints, (The Camp of the Saints), a novel in which France is overthrown by a million starving and sex-crazed Indian refugees when the French army is not prepared to fire on them."

After the 2019 Christchurch attacks, Le Pen outright denied knowledge of the Great Replacement conspiracy theory. When a news presenter asked her if Renaud Camus' theory had a place in her party, she prevaricated. "I am not aware of this great replacement theory," she said, falsely. "I have never used that term."

In 2017, Renaud Camus staunchly supported Marine Le Pen. For this year's election, however, Camus sided with Éric Zemmour, another far-right candidate who has spoken more loudly about his Great Replacement beliefs. Zemmour came in fourth after the first round of votes. For the second round, he has encouraged his supporters to vote for Le Pen instead.

Translations are the author’s own.