Double Check: What Do We Know About Events in Leicester? 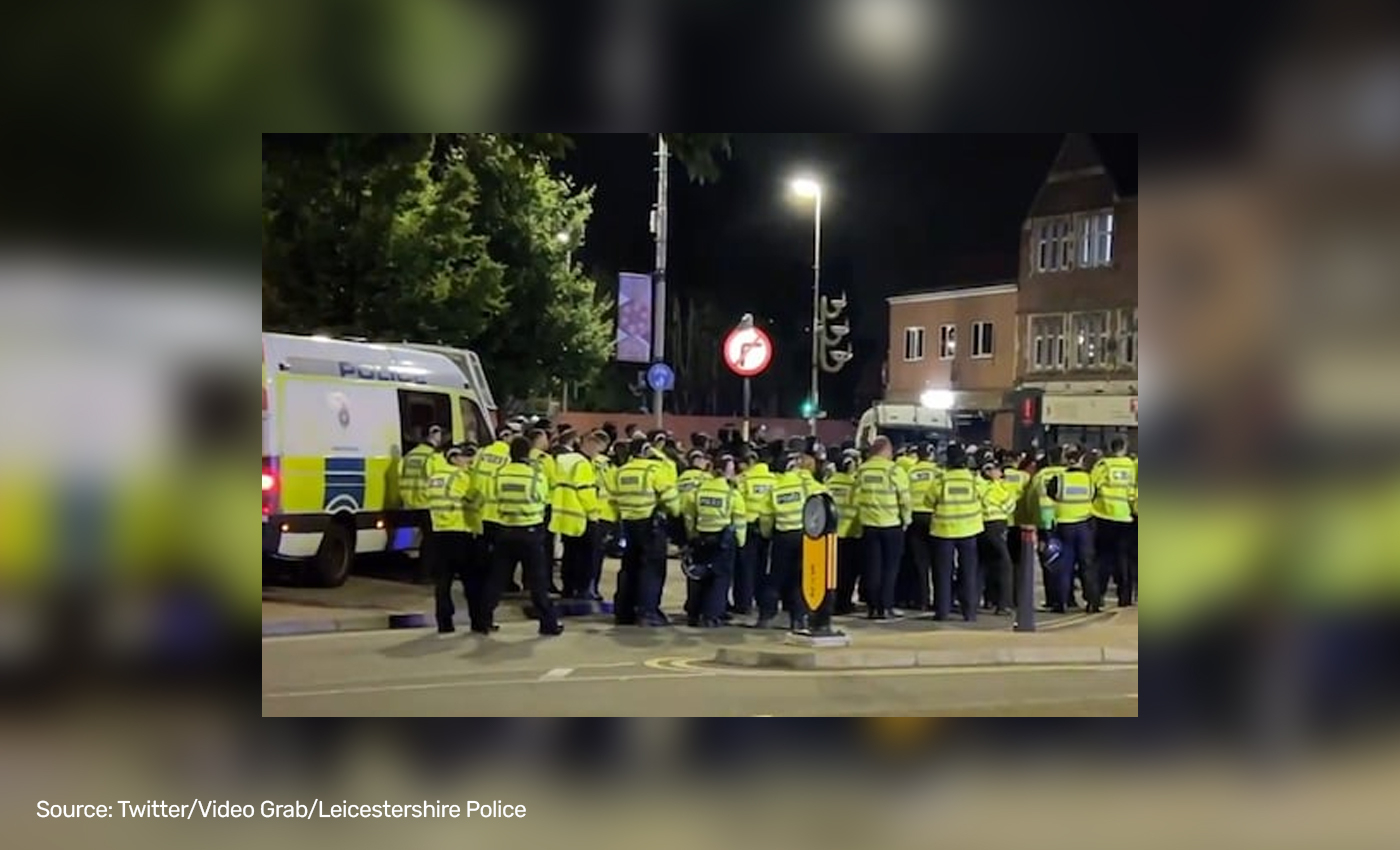 On the evening of Saturday, September 17, a series of confrontations occurred in Leicester amid rising tensions between members of the Hindu and Muslim communities. The disorder, which carried through to Sunday, has sparked intense debate online, with competing narratives being pushed concerning its causes and the culpability of the groups involved.

As the situation escalated in Leicester over the weekend, Mayor Sir Peter Soulsby and MP for Leicester East Claudia Webbe warned that misinformative social media posts were fuelling violence. This was not something that had happened overnight – on September 7, following previous incidents of disorder in the city, the Leicestershire Police had urged the public not to get involved in speculation on social media.

Although there have been no further flashpoints in Leicester since the previous weekend, the tensions created by these social media narratives have begun to spread to other parts of the U.K. as well, as events in Birmingham proved. And despite multiple fact checks, including by Logically, which have debunked some of the most inflammatory narratives, they continue to find fresh air.

On Thursday, 22 September, for instance, a claim was shared by a controversial right-wing commentator in India with a large number of followers that several Hindu families had been displaced from their homes in Leicester. The Leicestershire Police swiftly rebutted the claim in a reply on Twitter – showing that law enforcement is aware of how dubious posts on social media have fuelled the crisis and how, as separate analyses from the BBC and Logically have found, these narratives have been driven by overseas actors.

How We Got Here

Tensions spiked in Leicester after August 28, the date of a cricket match played by the Indian and Pakistani national teams in the Asia Cup 2022 cricket tournament, although the BBC has reported that tensions had been simmering for some months.

Following the match, reports emerged of violence during the celebrations. According to The Guardian, the Leicester Police clarified that a Sikh individual was assaulted by supporters of the Indian team. According to a police spokesperson quoted in the report, this incident sparked the spread of a false narrative online, with users misidentifying the victim as a member of the Muslim community.

The post-match celebrations led to at least one other incident where the police had to get involved. A Times of India (TOI) report on September 1 noted that violence broke out on Shaftesbury Avenue and Melton Road. It quoted Dharmesh Lakhani, owner of Bobby's Restaurant, stating that the celebrations after India's win had mostly been positive, but at some point a person stamped the Indian national flag. He adds that this incident infuriated Indian fans as they thought the person was Pakistani. The TOI report added that the alleged stamper and an officer were assaulted during the disorder, and a 28-year-old man was arrested on suspicion of assaulting an emergency worker.

Between August 28 and September 17, numerous smaller-scale disturbances occurred due to animosity between select members of the Hindu and Muslim communities. The BBC reported that 27 people had been arrested within a seven-day period.

During this time, narratives appear to have been amplified on WhatsApp and various social media sites alleging the targeting of Hindu households and encouraged a mobilization in response.

Tensions came to a head over the weekend when groups of Hindus gathered in Leicester and marched through areas known to have significant Muslim populations. This led to widespread disorder and violent altercations, resulting in the arrest of eighteen individuals. In a sign of the significant role played by those from beyond the local community, almost half of those apprehended were reported to reside outside the county, according to The Guardian.

The narratives regarding the situation in Leicester were driven by several inflammatory claims, some of which were promoted by journalists and other influential individuals in India.

False narratives and disinformation aside, social media played a significant role in facilitating the mobilization of individuals in the lead-up to Saturday. One graphic, shared by multiple accounts on Instagram, directed viewers to arrive at a designated time and place and stated that Muslims and Sikhs attending Leicester should be ready to defend women and children in their communities.

The highest reach and most retweeted piece of content was a tweet (Reach: 467436, Retweets: 1498) by a highly followed media figure in India. The tweet alleged that Muslims had attempted to keep Hindus, including children, hostage at a temple. A similar tweet (Reach: 233239, Retweets: 689) by another figure from the same media outlet achieved similarly high engagement.

Both tweets were posted within 20 minutes of each other. Leicester police have confirmed that no hostage situation had taken place that night. The same claim circulated on Facebook shortly afterward.

This was by no means the only narrative spread on social media – attempts were also made to claim that the aggressors were Hindu extremists. However, it is a powerful illustration of how hashtag dynamics on Twitter can use dubious inflammatory claims to supercharge smaller domestic conflicts and escalate tensions among communities on the ground.

The videos about a Hindu flag being removed from a temple while a crowd gathered outside and of two men burning a Hindu flag became the basis of perhaps the most influential inflammatory posts. This was because, in addition to claims about what was visible on screen, the posts about them – including those by journalists and other individuals with large social media followings – also made claims about radical Muslims taking children hostage, vandalizing properties belonging to Hindus, and an absence of police presence.

On reaching out to Leicestershire Police, Logically was informed that no reports had been filed with them regarding hostages. Community leaders confirmed to the media that a flag had been torn down and another one burned, but the hostage narrative was not backed up. Indeed, a Hindu community leader who confirmed that the flag had been taken down told The Guardian that an imam stood outside to ensure nothing happened. While there may have been people gathered in the temple that were fearful of the unrest outside, the usage of the term hostages was inaccurate and helped ratchet up tensions.

Attempts were made to portray the violence that broke out in the city as one-sided, with Hindus the victims of aggression by Muslim mobs. Some of these were generalized claims, which were easily shown to be misleading by going back to the origins of the disorder on August 28 after the India-Pakistan cricket match, as well as tweets and videos by residents of both Hindu and Muslim majority areas in which they claimed to see groups carrying weapons and reported people being attacked, though such reports have not been verified. By September 17, 27 people had been arrested in total, and while the police did not specify which communities they were from, the incidents over the previous few weeks involved members of both communities.

There were also more specific claims, including a video shared on Facebook showing a group of men attacking a restaurant, shared with the claim that "Muslim mobs were looting" an Indian restaurant, with the claim that it occurred within the context of last weekend's communal clashes. Our team identified the restaurant's name – Street Taste Co in Leicester City – and investigated. In a statement to Logically, the Leicestershire Police confirmed that there had been no reports of an attack against that restaurant. Street Taste declined to comment on this story.

However, it is important to note that there were also posts shared with an opposing narrative to show that the Muslim community was facing aggression from Hindus. On September 17, for instance, a post claiming there had been an attack on a mosque led by a mob of Hindus began to circulate. The post also mentioned that Muslim car owners had been targeted and their vehicles vandalized and that police intervention "always comes too late."

These claims were demonstrably false. In response, Leicestershire Police tweeted a rebuttal of the claims, confirming them to be untrue and requesting that people refrain from spreading unverified information.

A Dash of Context

Until the various police investigations are completed and the dust well and truly settles, it may not be possible to understand how Leicester's situation spiraled out of control – and whether it was the result of a coordinated and intentional disinformation campaign.

However, with separate analysis by both the BBC and Logically showing that a significant proportion of the tweets which drove engagement online came from India, some context about the current social and political climate there could be helpful.

In recent years, many commentators, including from India have argued that Hindu nationalist ideology has been on the rise following the election in 2014 and then again in 2019 of the Bharatiya Janata Party (BJP), led by Prime Minister Narendra Modi. A prominent strand of Hindu nationalism is 'Hindutva,' a muscular idea of Hindu politics that entails a rejection of secular governance and a commitment to India's establishment as a Hindu state.

The rise in Hindu nationalist influence has been accompanied by increasing communal rhetoric, driven not just by politicians and religious leaders on the ground but also by many media houses as well as right-wing influencers on social media. This rhetoric can spread like wildfire using distorted and often blatantly untrue narratives, whether about the recent controversy on the right of Muslim girl students to wear the hijab or about how the spread of COVID-19 in India was driven by a meeting of an Islamic sect.

While the focus of these narratives has been on Indian politics and social issues, it has also, on occasion, seeped into discourse outside the country as well. In the leadup to the U.K.'s 2019 general election, Hindu voters were targeted with WhatsApp messages denouncing the Labour Party's association with Muslim communities.

In addition to the social media narratives, last week's events in Leicester also saw another similarity with the current Hindu nationalist discourse in India. Groups of Hindus in attendance were filmed shouting the phrase "Jai Shri Ram," a greeting appropriated by nationalist movements and associated with acts of anti-Muslim violence.

Former First Lady Michelle Obama, in her keynote speech at the remote Democratic National Convention while talking about the state of the nation under the current administration said that Americans “…watch in horror as children are torn from their...

As the year draws to a close, it’s hard to escape feeling like there actually is a war on Christmas. For the second year in a row, a new variant has popped up to spoil the festive spirit. Plenty of us are wondering whether it's safe to spend the...