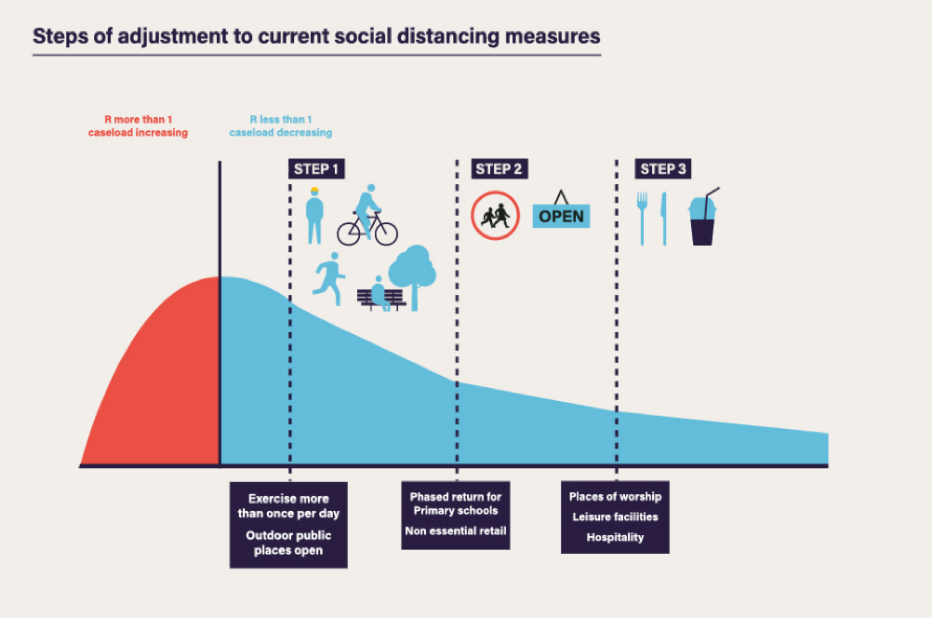 Following the UK government’s announcement that there would be further relaxation of social distancing measures from July 4th, an image has been doing the rounds on social media which suggests that this decision is contrary to the government’s previously stated plans on how re-opening would be managed.

Specifically, the graphic implies that the UK government had not previously planned on re-opening some bars, pubs, restaurants, and places of worship until COVID-19 had been contained to a much greater extent than it has been at this point.

Here is the graphic which has been doing the rounds; spotted in the wild on Twitter and Facebook:

This graphic has been taken from the UK government’s published COVID-19 recovery strategy. The only additions which have been made to the graphic are the ‘we are here’ and ‘we’re doing this’ indications, everything else is identical to the graphic in its original context, as seen here:

If the curve did represent R, and the Government’s plans on reopening depended on getting R to below what looks like roughly a third of its peak, then the edited version of the graph, and the point it is making, might be reasonable. Were it not for the fact that we do currently have an R value of around a third of our peak (actually, just below!) The peak of R in the UK was before lockdown, and probably hit around 3, while the most recent government data puts R at between 0.5 and 0.7, depending on the region of the UK.

The key misunderstanding here seems to have been what the peak of this graph represents. The only way the point of the edited graph is coherent is if we take the peak to refer to R=1; in that case, we would indeed currently be much closer to the planned phase 1 than phase 3. If the Government’s reopening plans were contingent on us reaching about R=0.3 before opening leisure facilities and hospitality, the Government would be ignoring its own plans, and in an extremely stark and bare faced way.

But, this fails to take into account the fact that R can (and did!) go much higher than 1. Given that the peak of R in the UK was around 3, then if the government graph above was a prediction of the fall in R, together with planned easing of lockdown measures at the labelled points, then we would be broadly on track.

If we take a look at the graph as it is published in the Government’s plans, we can see that it comes with a caption:

The implication here is that the main curve in the graphic does not represent R at all, but rather the total COVID-19 caseload. If we look at our best current data on the total number of new COVID-19 cases, we can see that the curve here does resemble much more strongly the predicted curve in the original published plans than the decreasing R-value, which would have been a much more gradual decline:

What’s annoying about this particular instance of misinformation is that it seems to me to be an honest misunderstanding of what is a badly designed graphic from the published Government plans. The initial graph does not label its axes, does not give units of measurement, and further compounds the risk of misunderstanding by labelling the pre-peak and post-peak infection rates with their respective R value. Compare this with the graph above detailing the UK caseload: someone would have to go to enormous effort to misunderstand this graph; or go to significant effort to falsify it or mislead people about its contents. Look that those clearly labelled axes, precise units of measurements, carefully delineated different sets of data points: this is a graph you can believe in.

Of course, it is entirely possible that the Government’s graph is intentionally vague (as the ‘five tests’ which the Government lays out to measure their own progress appear to be intentionally vague: who is to say what a ‘manageable level’ of daily infection rates would be?). But, if the vagueness here is not deliberate, it is a poor example of public health communication, with the entirely foreseeable consequence of causing uncertainty, panic and even harm.

Do You Know Where Your Children’s Data Is? Reverse-engineering a TikTok Moral Panic

On Wednesday April 8th, Reddit user tobrown05 posted a link to a YouTube video with the title “Not news, but tbh if you have tiktok, just get rid of it.” The video has been removed by YouTube, but the contents can be at least partially inferred from...